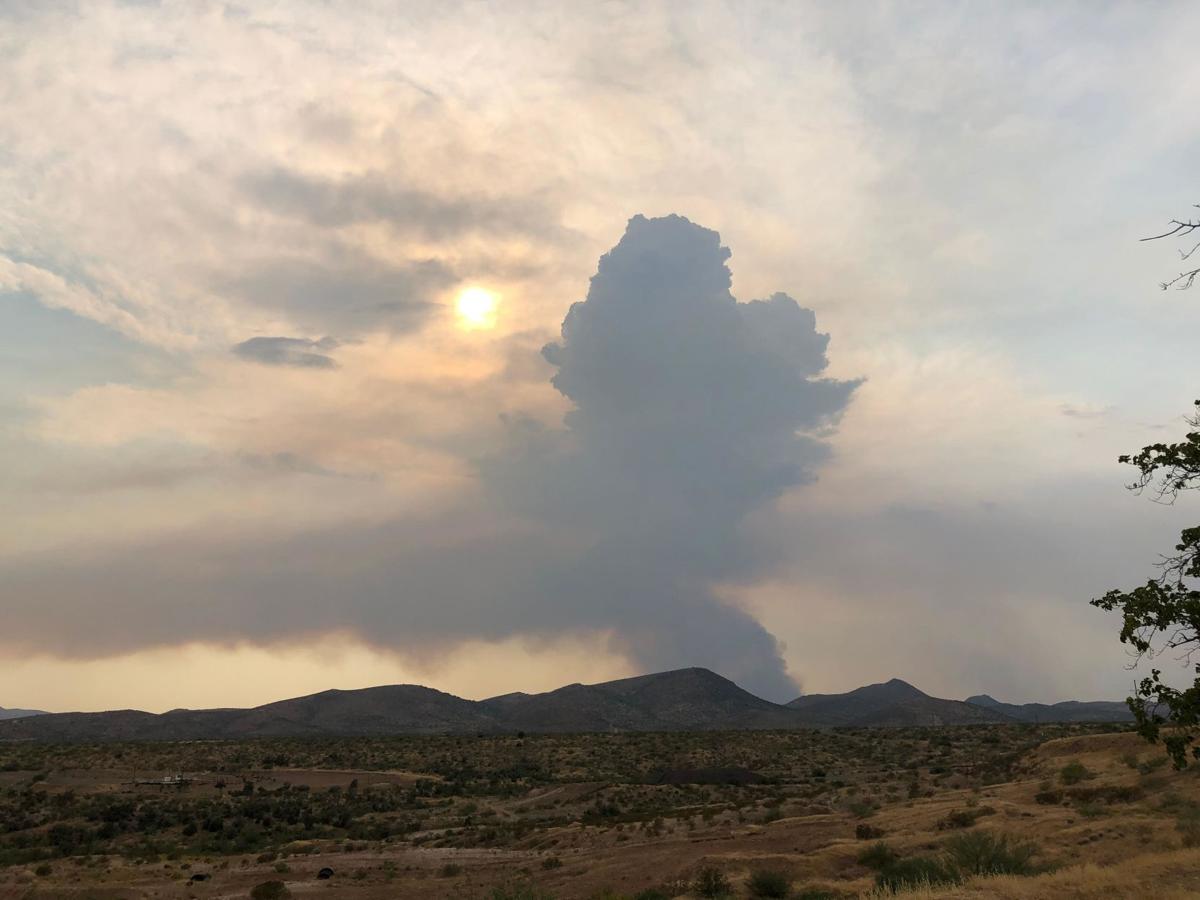 The Salt Fire throws up a plume of smoke.

An image of the Salt Fire burning north of Globe. 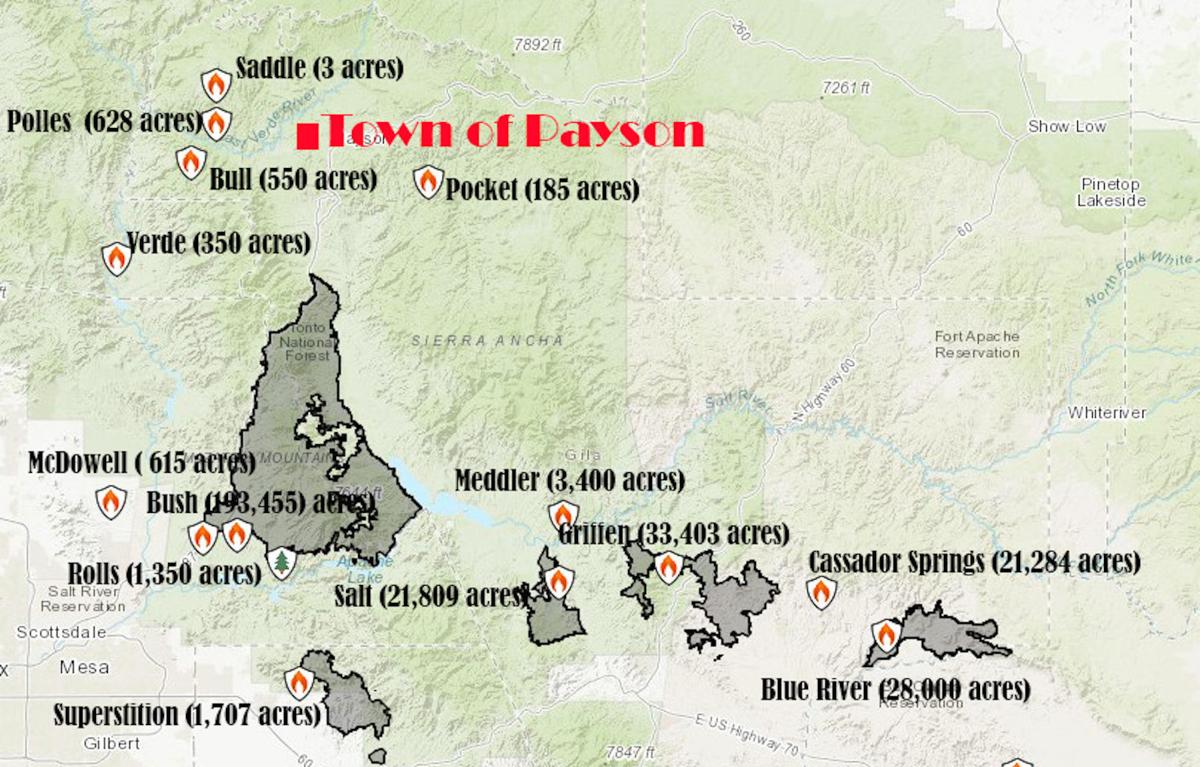 More than a dozen fires have started around the Payson area since July. Most from lightning strikes in August. 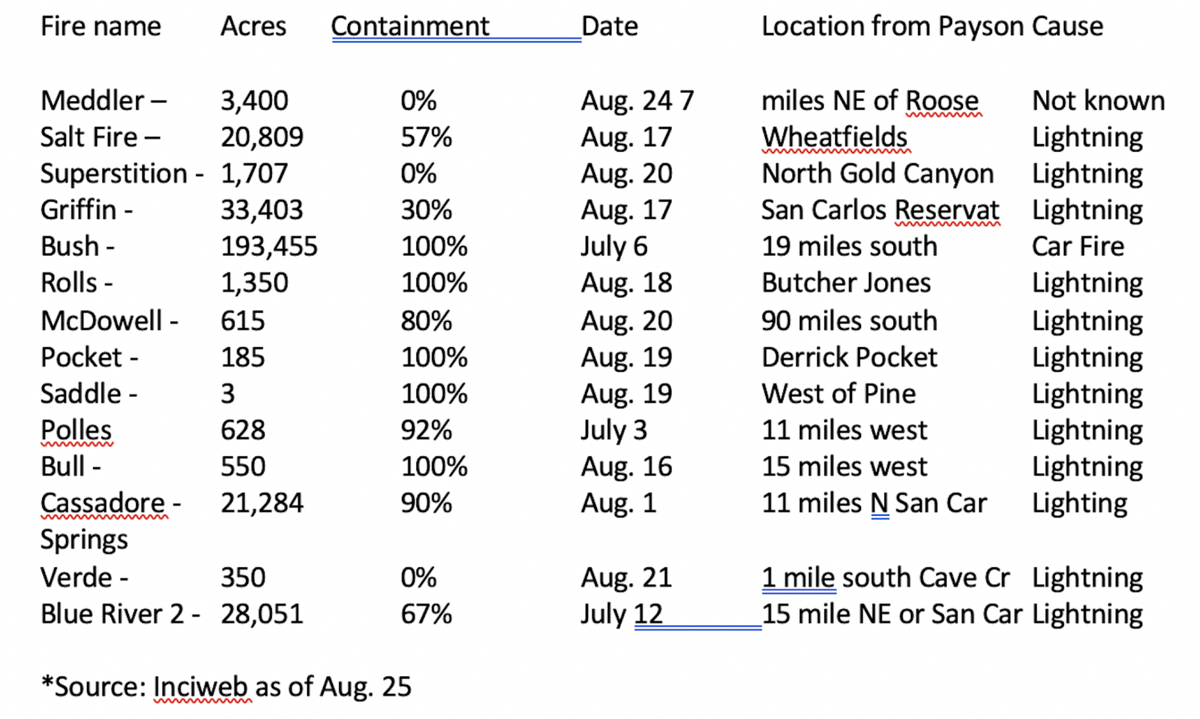 A list of the fires that have started around Payson since July. The majority caused by lightning.

Arizona has lurched into a frightening and unusual second fire season, with blazes raging across the southeast corner of the Tonto National Forest.

The fires have closed Highway 60, roads on the San Carlos Reservation and put numerous communities on evacuation notice, not to mention covering the town of Globe and Roosevelt Lake with smoke, especially at night.

“A below-average monsoon has added to the dryness of the fuels,” he said.

He and many local firefighting crews have stayed close to home because of local fires, even as California burns with more than 500 fires.

Typically, Arizona monsoons release local wildland firefighters to travel to other areas that need help. Not this year. In a scene more typical of early July, dry lightning started a dozen fires around the Payson area, while California has blown up as well.

The strain on resources has caused the National Interagency Fire Center to move the country into preparedness Level 5 in the last two weeks. The preparedness level determines if the country will exhaust all fire personnel and equipment resources. Once that happens, the U.S. asks for help from other countries.

Cindy Wolf, fire information officer for the Southwest Incident Management Team 5 covering the Griffin Fire explained right now with the West burning “we are competing for resources,” she said.

“We’re going to utilize all resources that we currently have. They will transition in and out” instead of going home, she said.

California has started to rotate in firefighters from Australia, then they will bring in Canadians, said Wolf.

Wolf has seen it before when she worked with Canadian firefighters in 1988 during the Yellowstone Fire.

Wolf said the weather hasn’t brought good news to the incident teams on the Salt, Griffin, Meddler and Superstition fires. They “are expecting higher temperatures and lower humidity over the fire area for the next several days,” said Wolf.

When coupled with afternoon thunderstorm buildup and outflow winds, officials have concerns for the safety of the firefighters. A particularly dangerous weather system called pyrocumulonimbus results when a thunderstorm mixes with a fire. The lightning, fire vortices, and black hail can add to the already difficult job of controlling a fire.

In a recent morning briefing, Wolf explained how the weatherman on the Griffin Fire spilled a cup of water onto the ground to show how it splatters.

“That is how a thunderstorm collapses,” said Wolf, “You can imagine what it does to a fire.”

But the weather isn’t the only complication on the fires burning south of Roosevelt Lake, the pandemic has complicated the ability to coordinate.

“They have to keep distancing. When we’re doing briefings, you can’t touch anything,” she said.

Moreover, the smoke from the wildfires poses an extra hazard in the midst of the pandemic.

Smoke can cause respiratory problems in the best of times, spurring an increased risk of asthma attacks, heart disease, lung problems and other issues. Research suggests that the fine particulate matter in wildfire smoke — especially microscopic soot particles — could make a COVID-19 infection even more dangerous. That’s true for both firefighters and for people miles from the fire front breathing the smoke.

And just to compound the perfectly awful storm, the federal government may soon run out of emergency money to fight the growing plague of wildfires throughout the West.

After the House and Senate deadlocked on passage of a second COVID-19 relief package, President Donald Trump signed an executive order directing the Federal Emergency Management Agency to use some $60 billion in disaster relief money to pay extended jobless benefits. Normally, that money helps provide relief from natural disasters, like hurricanes, wildfires, droughts and other emergencies.

The fires burning in California have already killed seven people, charred more than 1.4 million acres and consumed at least 1,200 buildings. The state has suffered 7,000 fires so far this year, compared to 4,000 fires that burned 56,000 acres last year.

The fires have included many areas normally resistant to fires, including the California redwoods and the upper desert Joshua trees.

At the moment, 93 large fires are burning more than 1.8 million acres in 14 states, including 24 in California, 16 in Arizona, 14 in Oregon, seven in Alaska and six in Colorado, according to the National Interagency Fire Center.

The Griffin Fire closed Hwy. 60 on Aug. 25. Both the Salt and Griffin fires threatened ranches and communities in the area. The weather remain…

"We’re going to utilize all resources that we currently have." Cindy Wolf.

"They have to keep distancing. When we’re doing briefings, you can’t touch anything." Cindy Wolf