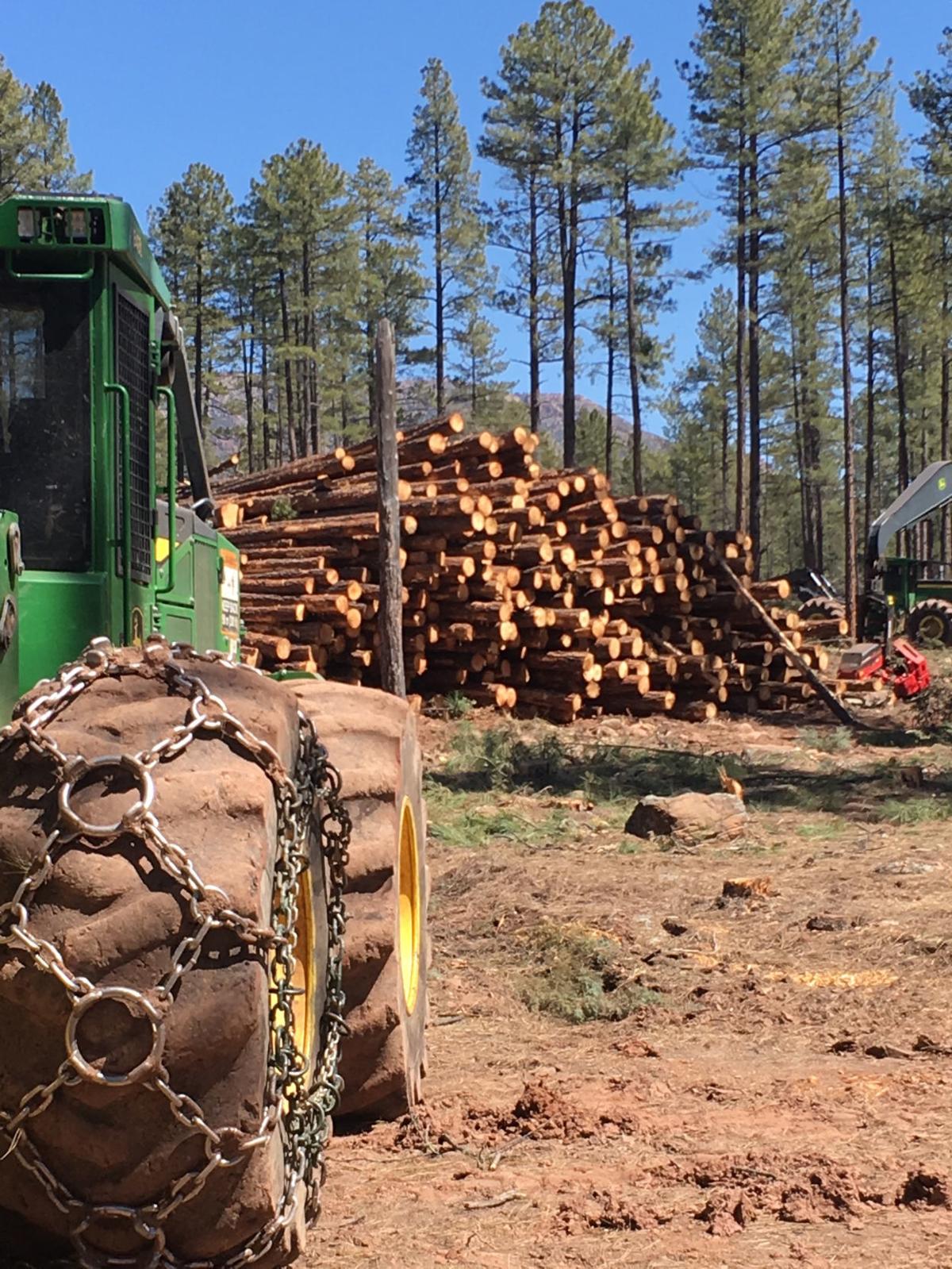 Logging in the Ellison Creek area on March 24. 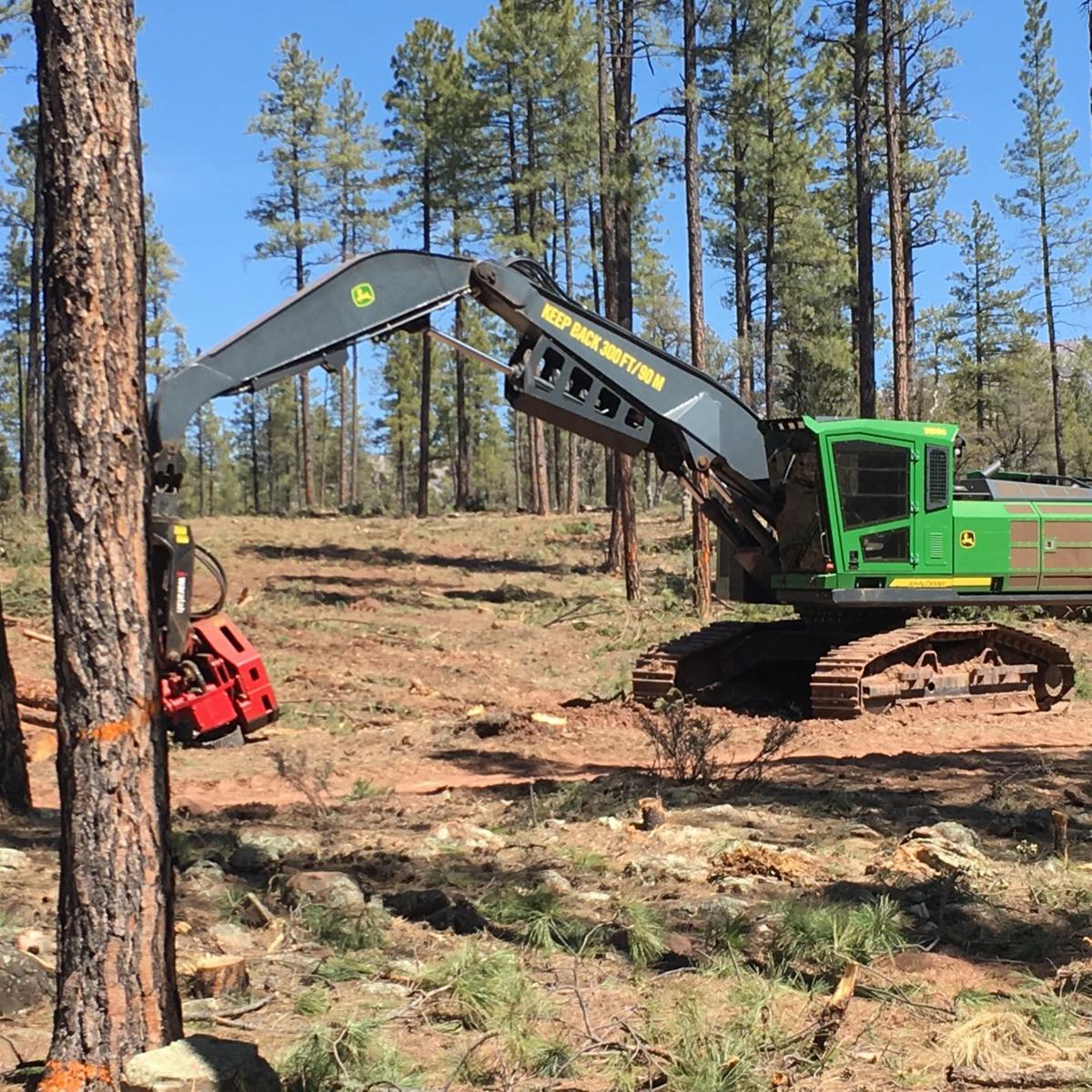 Logging in the Ellison Creek area on March 24.

And the weeds are a blooming.

So if the spring turns warm and dry and the monsoon takes its time arriving, Arizona could face one of those white-knuckle fire seasons.

Still, it sure beats last year, said Ducey and John Truett, a fire safety officer with the state Department of Forestry and Fire Management, at the press conference. They drew a dramatic contrast between last year’s bone-dry onset of the fire season and this season’s wet, weedy run up to the scary months.

For instance, this year Flagstaff got four times as much precipitation over the winter. Last year, the forest got so dry by April that the Forest Service shut down much of the forest — including most of Rim Country. Officials credited the closures with averting what could have been an awful fire season.

However, the closures seemed to have also resulted in a big drop in Payson’s sales tax receipts for May.

But the historic drought took its toll elsewhere. California suffered its worst year in history, with billions in damage and more than 85 deaths.

This year, the whole region has escaped drought for the first time in years.

But that doesn’t mean we’re out of the woods when it comes to wildfires.

The thick growth of ground cover due to the rain has delighted wildflower lovers so far this spring — but all those plants will turn to tinder when the temperature rises in April and on into May.

Truett said this year resembles 2005, when lightning after a wet winter touched off the 248,000-acre Cave Creek Fire, third largest in state history — behind the Wallow and Rodeo-Chediski.

He urged homeowners to prepare for the season by creating “defensible space” around their homes.

The recent loss of firefighter lives trying to protect unprepared communities like Yarnell has made fire managers much less willing to risk crews to protect structures.

The Payson Ranger District has spent the past decade clearing buffer zones around most Rim Country communities. That includes fresh clearing and pile-burning efforts around Ellison Creek estates this spring. The Forest Service has thinned more than 50,000 acres of buffer zones in Rim Country.

However, Payson relies on purely voluntary efforts to convince homeowners to clear overgrown trees and brush around their homes. Even a distant fire can rain embers down on forested communities like Payson, setting fire to pine-needle-covered roofs and plants close to the side of the house. These ember-caused fires from a nearby wildfire can quickly overwhelm fire departments.

Payson has also not adopted a wildland-urban interface building code to reduce the chance such an ember storm will set the whole town on fire.

Fire officials say last year could have turned into just such a rain of fire, but the forest shutdown likely avoided disaster.

Fortunately, the mid-term forecast from the National Interagency Fire Center calls for a cool-to-normal spring, when it comes to both rainfall and temperatures. That should push the dangerous fire season back into May and even into June. Once-upon-a time, June was the whole fire season — quickly relieved by the monsoon. During the drought years, the danger extended in to May and even April.

The Fire Center noted relatively low fire activity throughout the West in March, with snowpacks at 130 percent of normal and temperatures 3-10 degrees below average.

However, weakening El Niño conditions in the eastern Pacific will most likely keep things cool and wet on into the summer, concluded the center’s forecasters.

The April 1 outlook from the center concluded, “In 2019, an average to cooler than average spring is expected, so melting rates should be near average which could result in a delayed fire season entry in areas that have abundant snowpack.”

Most of the western U.S. has now escaped drought, although Alaska and the forests along the Canadian border remain parched, compared to normal conditions.

The forecast calls for above-average rainfall in the West through July, when the monsoon should ride to the rescue. The forecast says it’s tough to predict the monsoon, but it will probably be slightly delayed this year.

So here’s the wildfire forecast for the next few months:

• “normal” to “below-normal” fire danger through June, with below-average temperatures and above-average rainfall.

• Some signs of a resurgent El Niño pattern could last into the mid-summer months, which probably points to continued low temperatures and increased rainfall.

• Mid to late spring could see moisture drawn into the Southwest for the areas west of the Continental Divide, resulting in below-normal fire danger.

• That same trend could result in more, early lightning storms in Arizona, which would increase the fire danger here in the mid to late spring.