Sign Up
Log In
Purchase a Subscription
You are the owner of this article.
Edit Article Add New Article
You have permission to edit this article.
Edit
Home
CIRCULATION OPTIONS
News
Schools
Opinion
Sports
Multimedia
Outdoors
Local Events
Classifieds
Legals
Obituaries
COVID-19
1 of 8 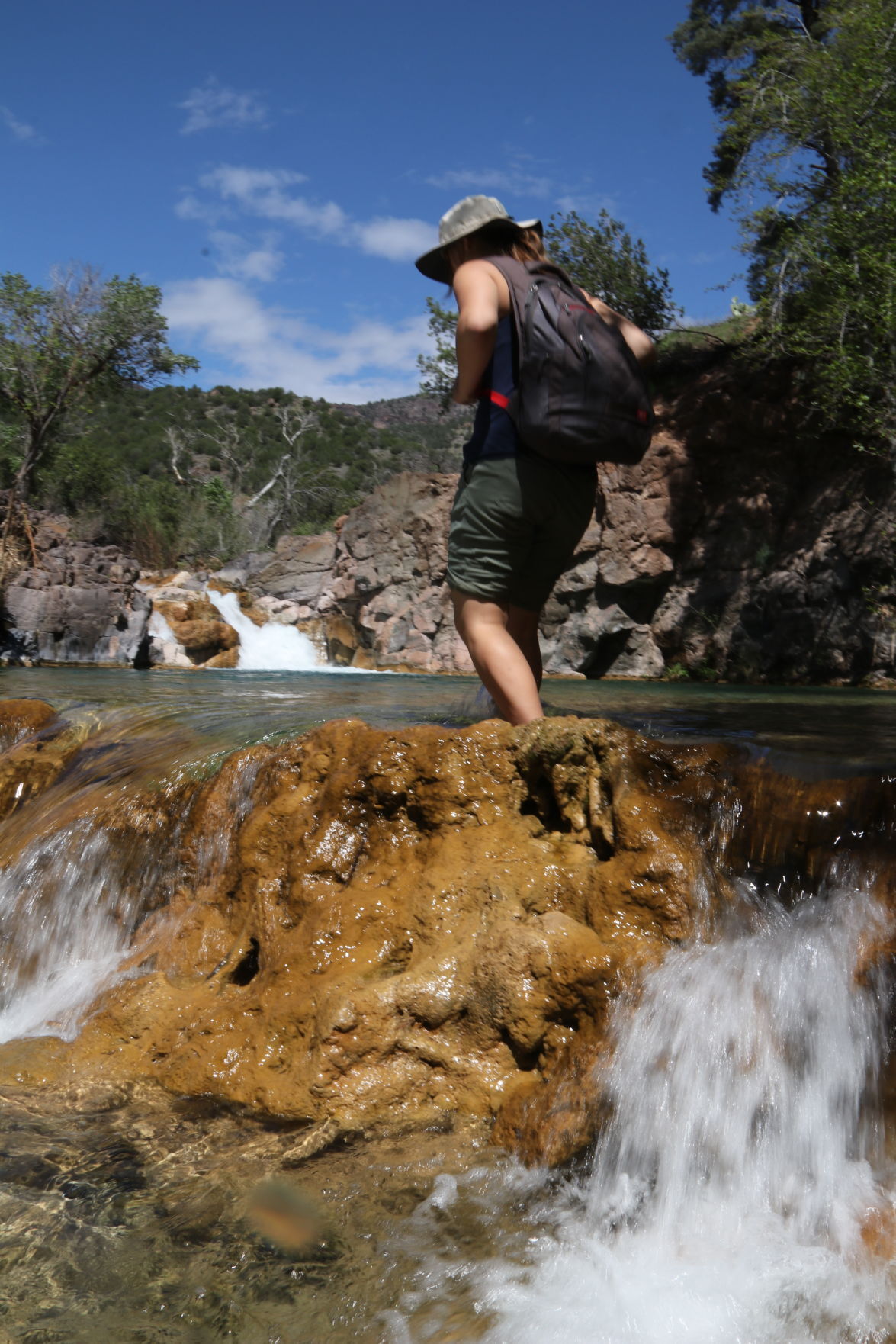 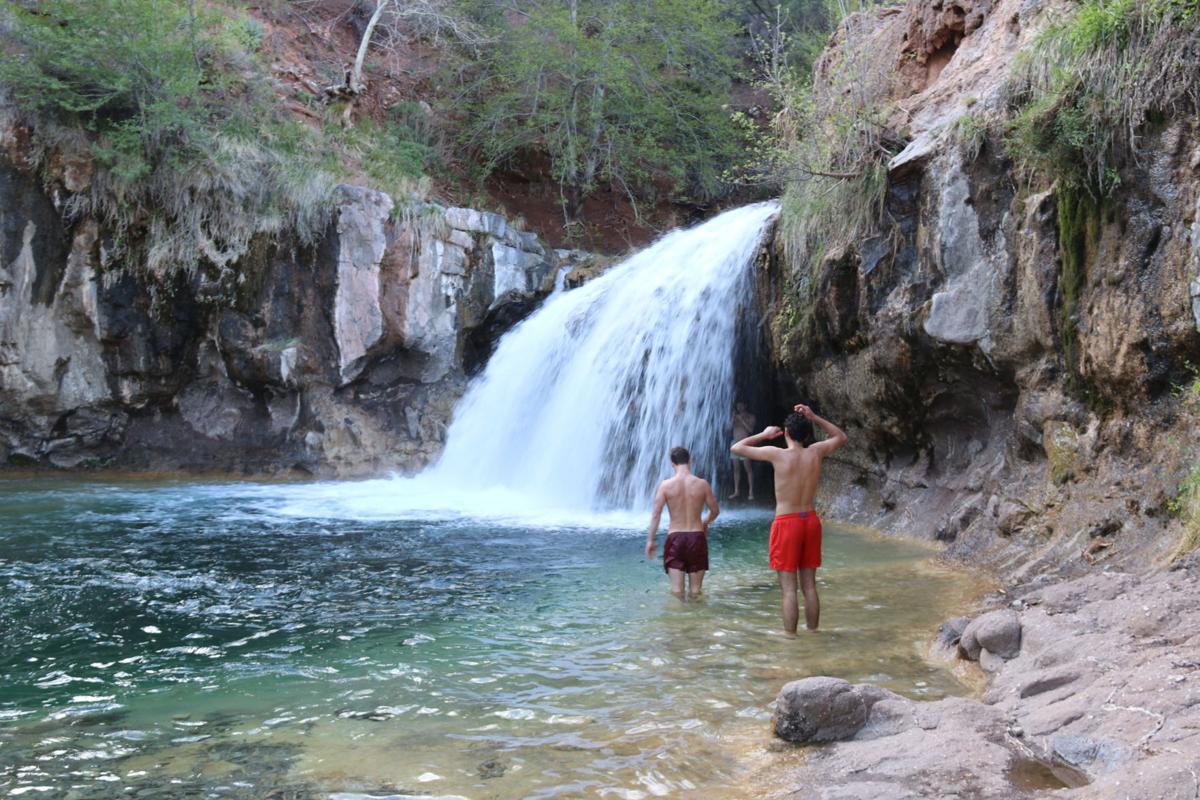 Fossil Creek is a popular summer destination, but how to address public safety and environmental concerns continues to be debated. 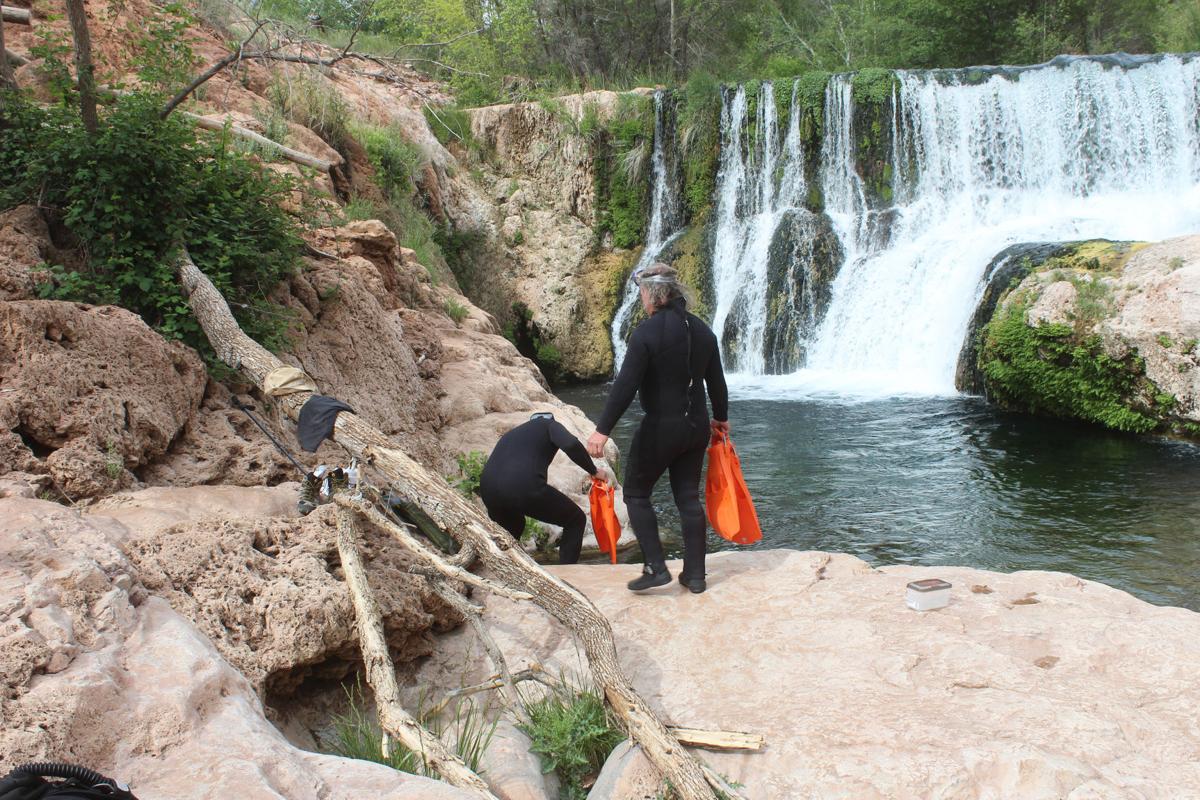 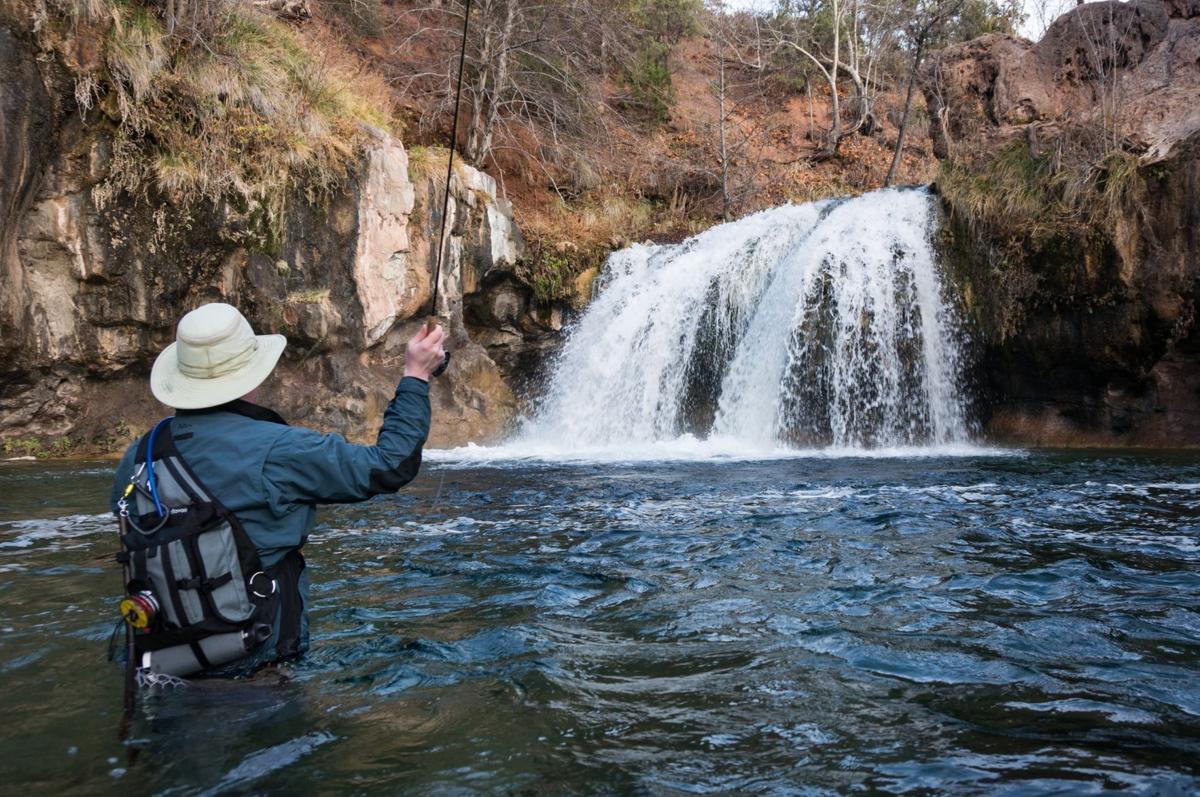 Fishing in Fossil Creek is big business for Gila County, with rivers and streams bringing in millions each year. 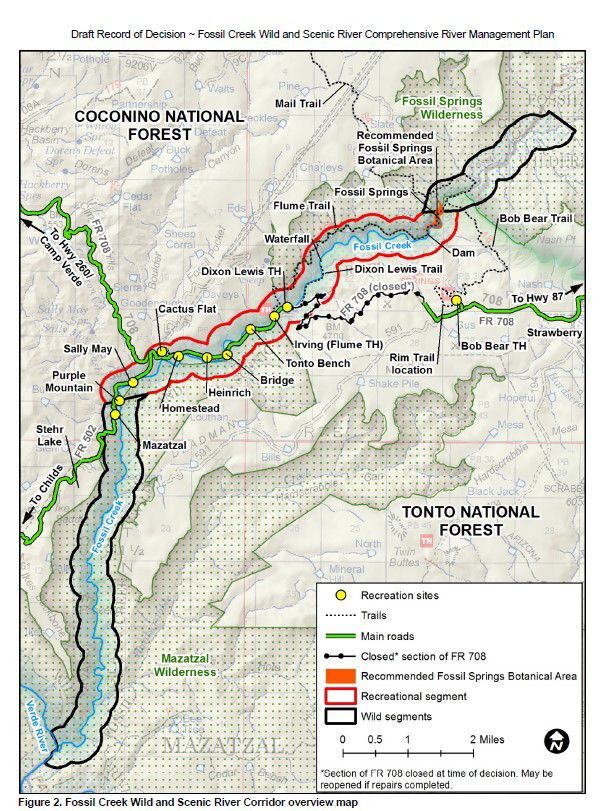 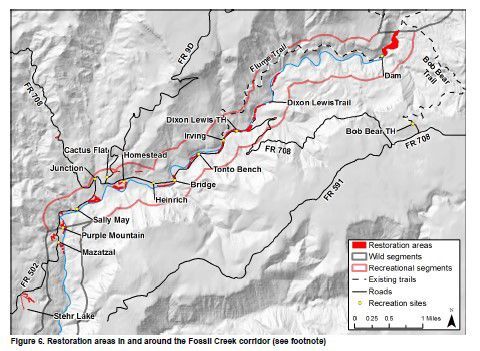 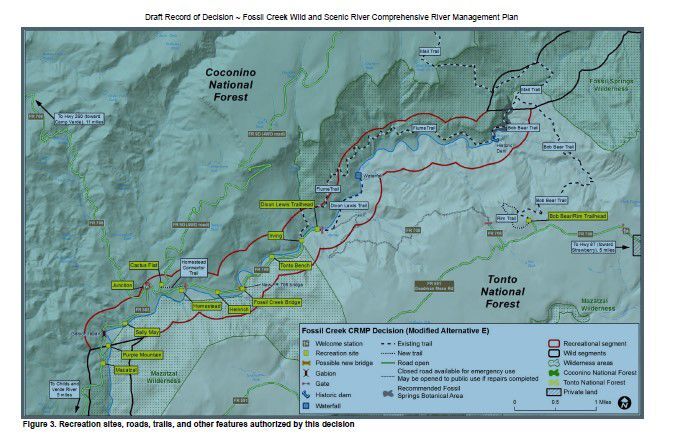 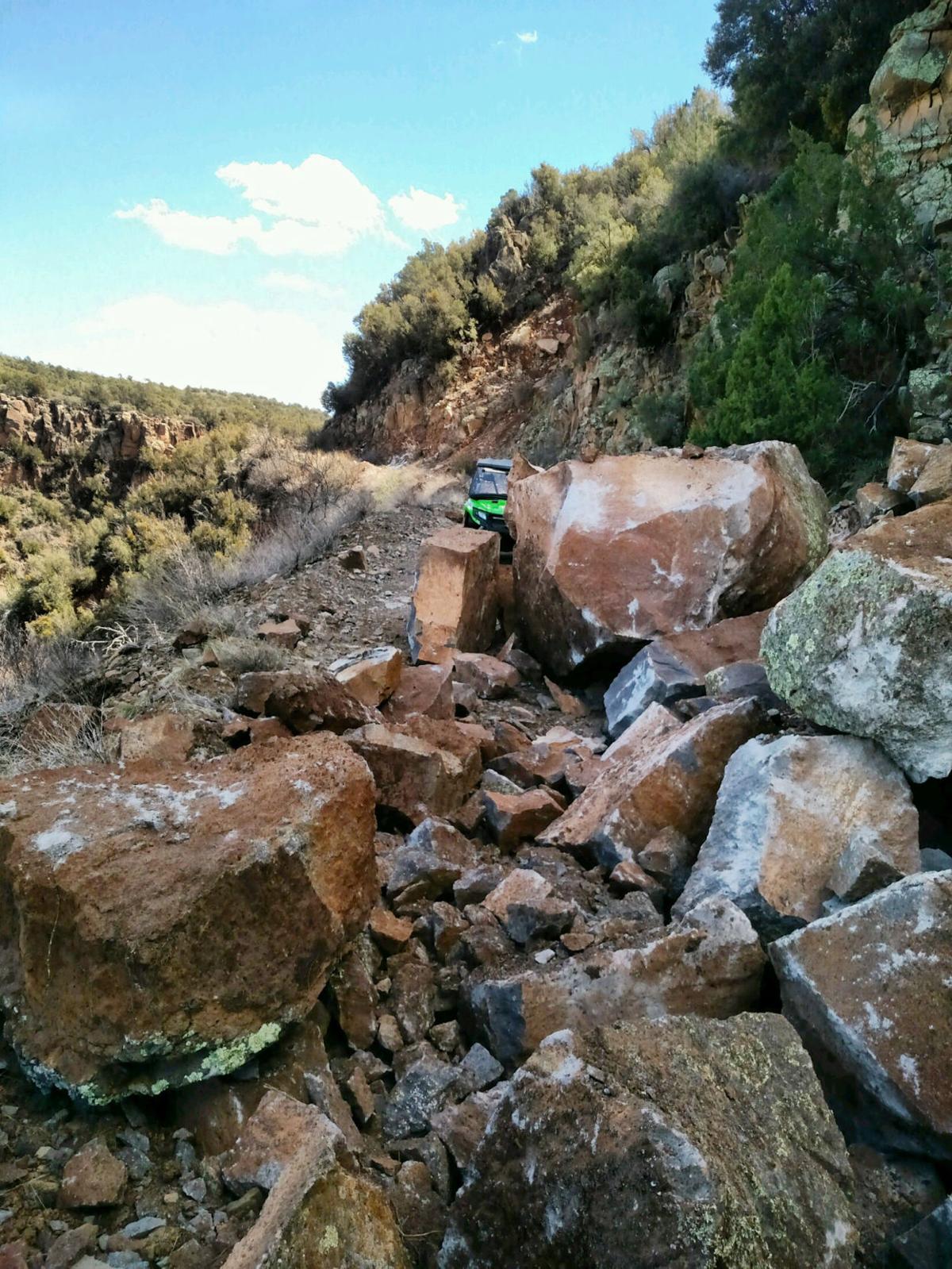 Not even a 4x4 can pass the rock slide on the Fossil Creek Road.

Fossil Creek is a popular summer destination, but how to address public safety and environmental concerns continues to be debated.

Fishing in Fossil Creek is big business for Gila County, with rivers and streams bringing in millions each year.

After years of study, hundreds of public comments and multiple hearings, the Forest Service has opted for a mushy status quo in the management of Fossil Creek.

The Forest Service last week issued a plan that will continue an overburdened permit system, cut the proposed number of future parking spaces, further reduce access to the creek from Rim Country and postpone into the misty future repairing a road crucial to Rim Country access.

The plan doesn’t address the pleas from search and rescue teams for improved access to the creek from Rim Country. The creek has been the site of repeated drownings and hundreds of rescues. Rim Country rescue teams most often respond, but it can require a grueling eight-hour effort by paramedics and volunteers due to the closure and poor maintenance of FR 708 from Strawberry to the canyon bottom.

The Forest Service essentially split the baby between protection and recreation, leaving most people on both sides of the debate disgruntled.

The plan will continue a permit system that crowds about 90,000 visitors a year into a portion of the creek during the warm months, which is a big decrease from the 130,000 visitors that came in the year before the permit system was imposed. However, the plan also offers few new infrastructure investments to handle the still huge summer crowds. The plan focuses the recreational use on just 11% of the creek’s length, mostly along a stretch of road currently accessible only from Camp Verde.

Coconino National Forest Supervisor Laura Jo West said “an extraordinary amount of work, effort, collaboration and public input has gone into developing this river management plan, EIS and draft record of decision. The process to get to this point has been lengthy, but that does not overshadow the importance of having included stakeholders and people who have a vested interest in how Fossil Creek is enjoyed, protected and managed. This plan focuses on providing continued recreational opportunities while protecting the wild and scenic river for many years to come.”

The Forest Service will continue to accept comments on the revised management plan into January. For information on how to file an objection go to https://www.fs.usda.gov/project/?project=27457.

Congress ordered the Forest Service to come up with a plan for the unique creek. The spring-fed creek was diverted to run hydroelectric generators for a century, before being returned to the streambed in 2005. Laden with travertine, the water builds beautiful formations and serves as one of the Southwest’s premier refuges for endangered native fish, 200 species of wildlife, hundreds of plant species and a host of rare and endangered species.

The Forest Service imposed the permit system and an interim management plan in 2016 and has been pondering a permanent management system ever since. The four years of study produced only modest changes from the status quo of the past four years, mostly involving a reduction in planned future parking spaces.

The proposed plan holds the door just slightly ajar for someday coming up with the money it would take to repair and improve FR 708, which provides easy access to the canyon bottom from Rim Country. Search and rescue teams say the road is critical during rescue missions. It also provides access to the fiber-optic cable providing internet and cellphone service to much of Rim Country. However, the plan makes no commitment to eventually opening the road to the public, maintaining it for emergency access or finding a potential funding source.

For now, the visitor permits would remain essentially unchanged. The system will accommodate up to 148 vehicles with about 810 people on any given day from April to September, when permits are required.

The plan calls for a possible expansion to a maximum of 212 vehicles and 1,120 people per day. But even that future expansion represents a reduction of 108 vehicles and 420 people compared to the preferred alternative in the last version of the plan. However, the expansion will depend on both the impact of the existing tide of visitors on the wildlife, water quality, scenic values and cultural values — not to mention finding the money to improve facilities.

The lack of resources to manage visitors to one of the state’s recreational crown jewels runs throughout the discussion of the management plan. The National Park Service and even Arizona State Parks manage much more intensive recreational use, but they can also afford a lot more infrastructure — like parking, patrolling, road maintenance and toilets. For instance, Tonto Natural Bridge State Park gets up to 122,000 visitors a year — who pump $7 million into the Rim Country. Slide Rock State Park gets about 250,000 visitors annually. Fossil Creek involves a much larger area than either of those state parks, but can accommodate only about 90,000 in the current permit system. That’s a reduction of about 40,000 from before the permit system.

The spring-fed waters of Fossil Creek gush out of the ground at 72 degrees and build a magical series of spillovers and travertine check dams down the length of the stream. The travertine coats the stream bottom, leaving the water warm and Caribbean-clear, creating a heaven for native fish, wildlife, snorkelers, swimmers and kayakers. It has the recreational, scenic and natural attributes of a premier national park, but the Forest Service lacks the resources necessary to manage intensive use without damaging the natural resources. Biologists estimate that the creek could support an additional 300 species of mammals, birds, reptiles and amphibians.

As a result, the management plan focuses on limiting rather than maximizing use, especially with handling the vehicle access and the hike from the road to the main waterfall with its deep pool. About 65% of the visitors to the creek make the trek to the waterfall, which has no facilities and has been the site of half a dozen drownings.

The changes in the preferred plan during the three years of additional pondering mostly further reduces future access, while promising no significant increase in infrastructure to manage the crowds.

• Dropping a plan to add parking spaces at the Bob Bear Trailhead, the steep trail into the canyon from Strawberry formerly known as the Fossil Springs Trailhead.

• Dropping a plan to let people drive through to take in the scenery, without getting out and parking to swim in the creek and spend the day. That plan would have added 40 spaces for motorized trail vehicles — which might have been able to use FR 708 from Strawberry.

• Dropping a 42-vehicle parking area at Irving and removing the existing vehicle bridge.

• Dropping a three-mile trail link to make it possible to hike from Strawberry all the way to Irving by linking two existing trails.

• Changing the name of the Waterfall Trail to the Dixon Lewis Trail to honor an early homesteader in the canyon.

As someone who has photographed Fossil Creek for around 30 years, this is such a shame. I have been there many times. Sad. In my opinion the FS has not done their job. A real treasure for Arizona, basically now gone. Nick Berezenko once photographed this entire creek for Arizona Highways Magazine . . . with a huge reception put on and paid for by APS. Looks like Strawberry loses again.

Blah, blah blah, more Stanford BS Pete. The Lib/PC FS would rather close it down and still collect their paychecks. A real FS would open it up, build parking, expand 2 lane emergency access, build sanitary facilities onsite, teach visitors safety/environmental respect and implant a volunteer EMT team onsite to SERVE THE PUBLIC that pays for it! I dare you to post this! gary cauble, haigler creek az