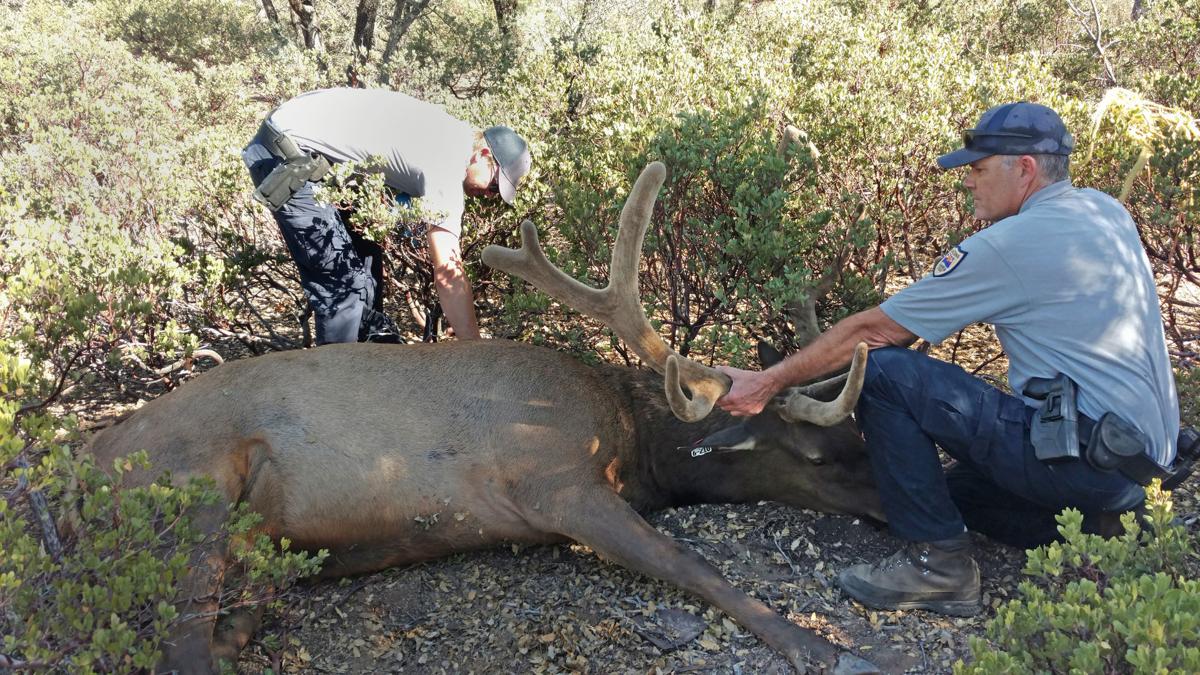 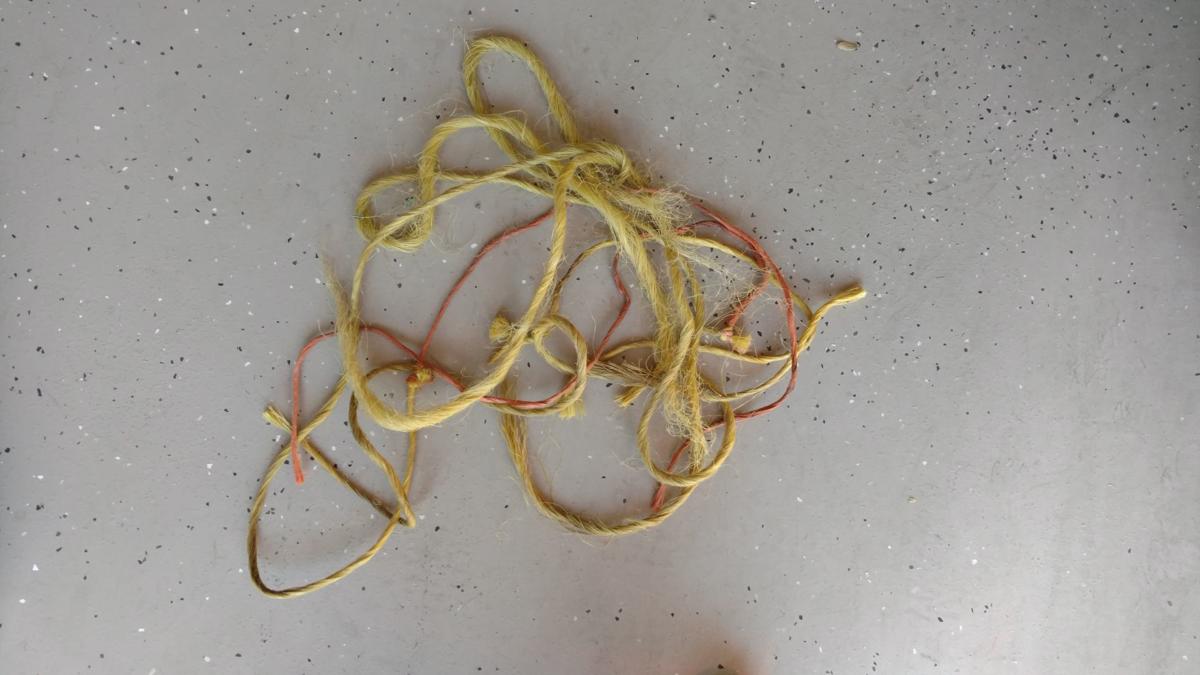 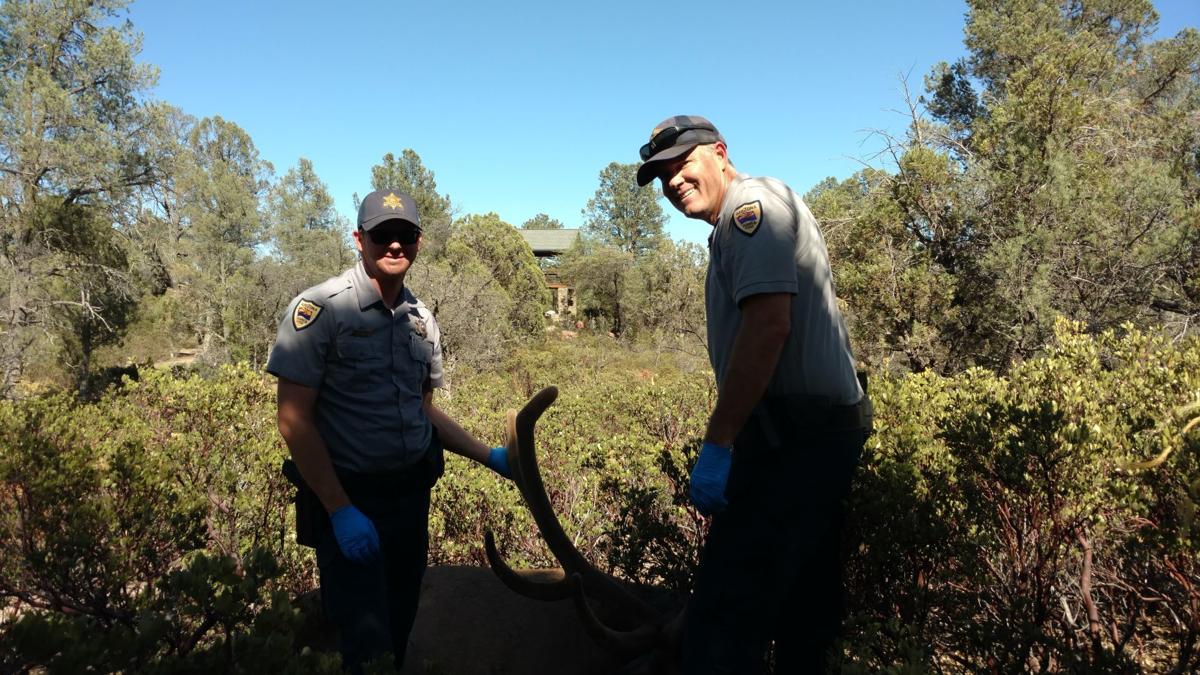 Arizona Game and Fish wildlife managers Jarrod McFarlin and Joe Sayer tranquilized an elk in Payson so they could untangle a length of rope (pictured below) from the big bull’s antlers.

Arizona Game and Fish wildlife managers Jarrod McFarlin and Joe Sayer tranquilized an elk in Payson so they could untangle a length of rope (pictured below) from the big bull’s antlers.

Residents of Payson, especially those on the west end of town have been questioning if the big bull elk affectionately known as “Big Boy” had made it through the last hunting season. For several years, this bull has captured much attention by his large body size and the enormous antlers he grows each year. Residents are hopeful each spring to see this majestic specimen of Rim Country. Typically, during early June, elk are seen more often in local neighborhoods feeding on manzanita, acorn buds and in search of scarce water sources. But this year, Big Boy’s return was bittersweet.

The bull was observed by several Manzanita Hills neighbors growing a large set of antlers still covered in velvet. However, a long piece of rope had become wrapped tightly around his antlers, under his jaw and perhaps even more dangerous was a piece of the rope was dragging about five feet behind him just waiting to get caught in something. His antlers are badly deformed and broken as a result of the elk trying to remove the rope.

A call was made to the local Region VI of the Arizona Game and Fish Department office to report the situation. The caller reported that in addition to the rope, the animal appeared to be extremely stressed and blood was visible on his head.

Fortunately, the resident knew exactly where the bull had bedded down that day. Within an hour of making the call, two AZGFD wildlife managers, Jarrod McFarlin and Joe Sayer, were on the scene. After assessing the situation, they contacted four neighbors to request access to their property and advised them of the situation. With approvals given and the neighbors all watching from patios and balconies, the wildlife managers peered over a fence only to find themselves face to face and within 10 yards of the massive elk.

Cautiously, Sayer leveled the tranquilizer rifle and shot a dart into the rump of the elk. The elk ran a short distance before the mixture of Telazol and Xylazine drugs took effect. After about 20 minutes and the bull still refusing to lay down, McFarlin fired a second dose. Another suspenseful 20 minutes passed, as well as a short stalk, before the bull lay down. Still awake and shaking his head, Jarrod placed one more dose and within a few minutes the bull was asleep.

Then began the laborious task of cutting and removing the rope from the antlers and head. The darts were removed with care taken to clean the puncture marks with an antiseptic cream. They ear tagged the elk for future reference. The final step was to administer injections of Tolazoline, a reversing drug for the Telazol and Xylazine. Satisfied their work had been completed, they backed away to let the elk recover naturally.

After two hours, neighbors observed the elk standing, but still clearly feeling the effects of the tranquilizing drugs. However, after another hour, the elk was feeding and walked off as if nothing had happened.

It’s not often that average citizens get a chance to witness these kinds of efforts by professional wildlife managers. The quick response time, courtesy afforded by the neighbors, skilled accuracy and knowledge of the tranquilizing process and recovery drugs all contributed to an extremely successful day for the Payson neighborhood, the Arizona Game and Fish Department and especially “Big Boy” who in his own way, seemed very grateful.