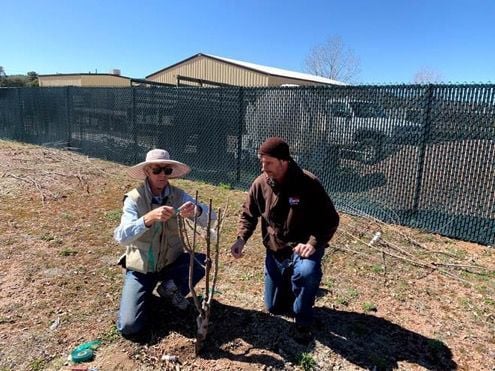 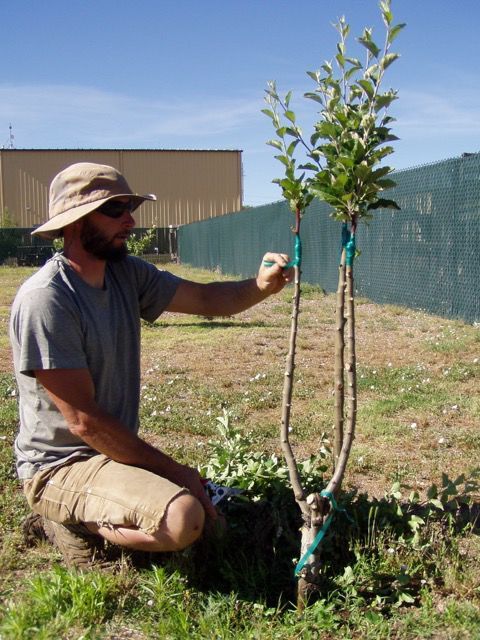 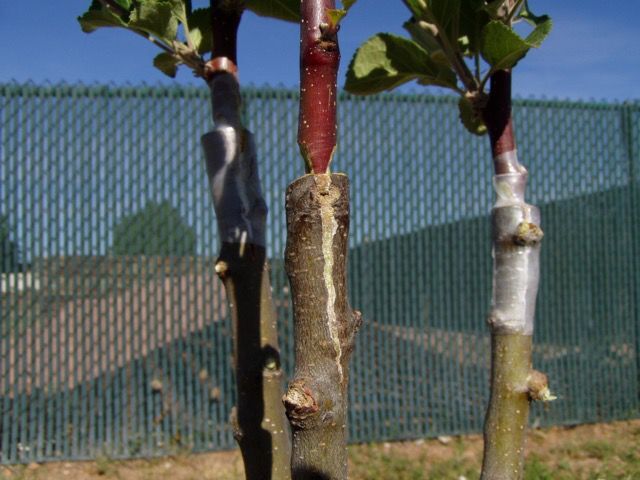 Blossom clusters in the apple orchard behind the Sawmill Theatres represent more than just downtown beautification — the trees are also a lesson in heritage and botanical preservation.

Planted by pioneers more than a century ago north of Payson, the Verde Glen varietals on this strip of town property are a living, green link to Payson’s pioneers.

On a quiet morning in February 2017, while the local apple trees were still dormant in the winter cold, an idea blossomed in Payson’s then mayor Craig Swartwood’s mind. He was watching the popular horticultural broadcast of Dave “The Garden Guy” Owens on Channel 3 as he discussed grafting old apple trees. The entire town could get behind this one, Swartwood thought, an orchard, right in the middle of town, for all to enjoy. But not just any orchard. No, this would be an orchard filled with the apple trees that the pioneers of the area brought with them many years ago. On his own land, about 20 miles northeast of Payson, Owens has several Verde Glen trees that he estimates to be 60 to 100 years old.

“I would say these apples are not only historical in nature, but very rare indeed, and truly need to be saved,” said Owens. “I truly want to leave this lineage as a legacy to future generations.”

It was a great match: Owens with the heritage trees and Swartwood with the vision. They became fast friends. Within two weeks the Payson Town Council agreed to move forward on the project with the overwhelming support of the town and small businesses. But there were a few council members concerned with the cost of the project and making such a quick decision. The town chose to move forward anyway, knowing that if they tabled the project the trees would not get planted that year.

The town already had an ideal strip of property that the water department was no longer using, and conveniently located close to Main Street along the American Gulch, behind the Sawmill Theatres. Potentially, the orchard would catch the eye of passersby, and lure tourists in to pick a few apples and visit the many small businesses on Main Street. Community support was overwhelming. Within 24 hours donations reached $10,000, then $15,000 within the first month. Swartwood said, “It shows you how the Rim Country people can get behind something, that they are excited to see something happen over there (on Main Street).”

Irrigation lines and fence posts were installed by mid-March 2017, and a fence was erected to keep trees safe from browsing elk. Parks Operation Manager Nelson Beck managed the project alongside other town employees and numerous volunteers. Plant Fair Nursery owner Glen McCombs happily donated all the Malling-apple rootstock, and trees were planted in early April 2017. Dave Owens’ goal was to graft the 62 trees the following year after they had time to establish a healthy root system.

The rootstock variety determines the tree size, ripening time, disease resistance, and cold hardiness of a tree. A cutting from another tree (a scion) can then be grafted onto the rootstock and will determine the variety of apple that will be produced.

The plan was to wait until the following spring and harvest many scions from Dave’s trees. However, the harvesting of scions and grafting would have to wait for the last piece of the plan to fall into place. Volunteers to do the harvesting and grafting had not yet appeared.

Under the direction of Dave West (Dave Owens’ neighbor), a small group of volunteers including Glen McCombs, Martin Frauenknect and Dave Owens took cuttings from several heritage apple trees. These trees came to Verde Glen (just north of Payson) from St. Louis via train, brought to the area by Mercedes Belluzzi in the late 1800s and early 1900s. The original land patent of 1894 gave 160 acres to McLoughlin, and 160 acres to the Belluzzi family. Together, the two families cleared 25 acres for the trees and dug a half-mile ditch to bring irrigation water from the nearby East Verde River.

These apples and other produce grown by the homesteaders were sold to the loggers nearby and used to feed their pigs, which were sold as well.

On March 3, 2020 Glen, Martin, Nelson, Shawn Simmons, UA Gila County Extension Agent Chris Jones, and Master Gardener Rich Johnson assembled at the Payson orchard. With tools in hand and little experience to work from, Chris and Martin gave a quick tutorial on the cleft-graph process. And off they went.

The first row of trees was painstakingly, though enthusiastically, grafted with cuttings from one heritage apple tree from Dave’s homestead.

Over the next month the team grafted three more rows, a total of 66 grafts on 30 trees. By the time the last grafts were made, several of the first grafts were noticeably “taking,” or coming alive. Buds were swelling! At least some of the old trees were going to live on. By mid-May the verdict was in: 63% of the grafts were alive and well, which meant that five different heritage trees would one day produce heritage apples in the Payson apple orchard.

Payson’s new apple orchard is well on its way to becoming a downtown landmark, thanks to the vision of wise city leaders and the enthusiastic volunteers respectfully recognized above.

Over this past summer limited pruning was done to keep the trees healthy, and direct their energy into the new stems. The team is looking forward to getting more cuttings from other old trees this coming winter so that they can do more grafting in the spring of 2021.

If you have access to other Payson-area, and knowledge of their variety and history, please contact Chris Jones, 928-402-8586 or Rich Johnson, 520-248-0710 to see if we can document the history — and collect scions to add to Payson’s growing apple orchard.