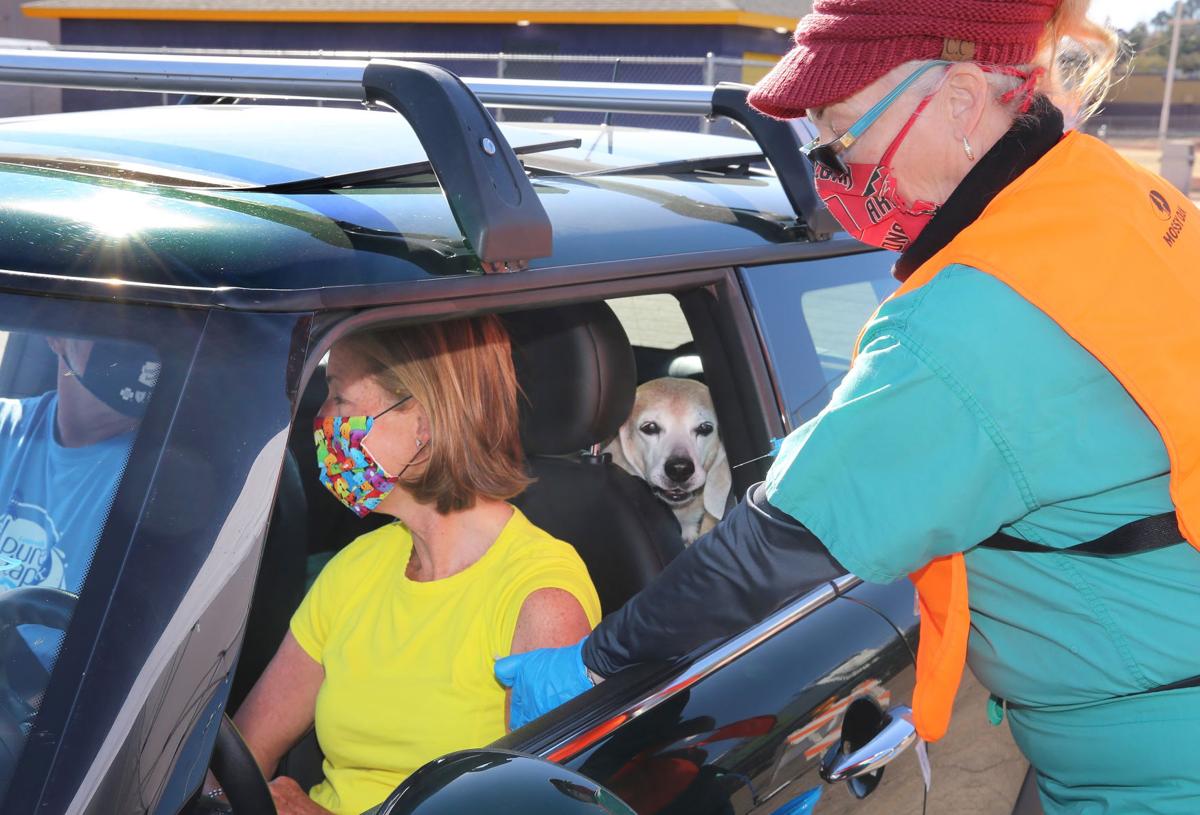 A couple receives their first COVID vaccination shots Saturday at Payson High School. Because it was a drive-thru clinic, many brought along passengers, including their dogs. 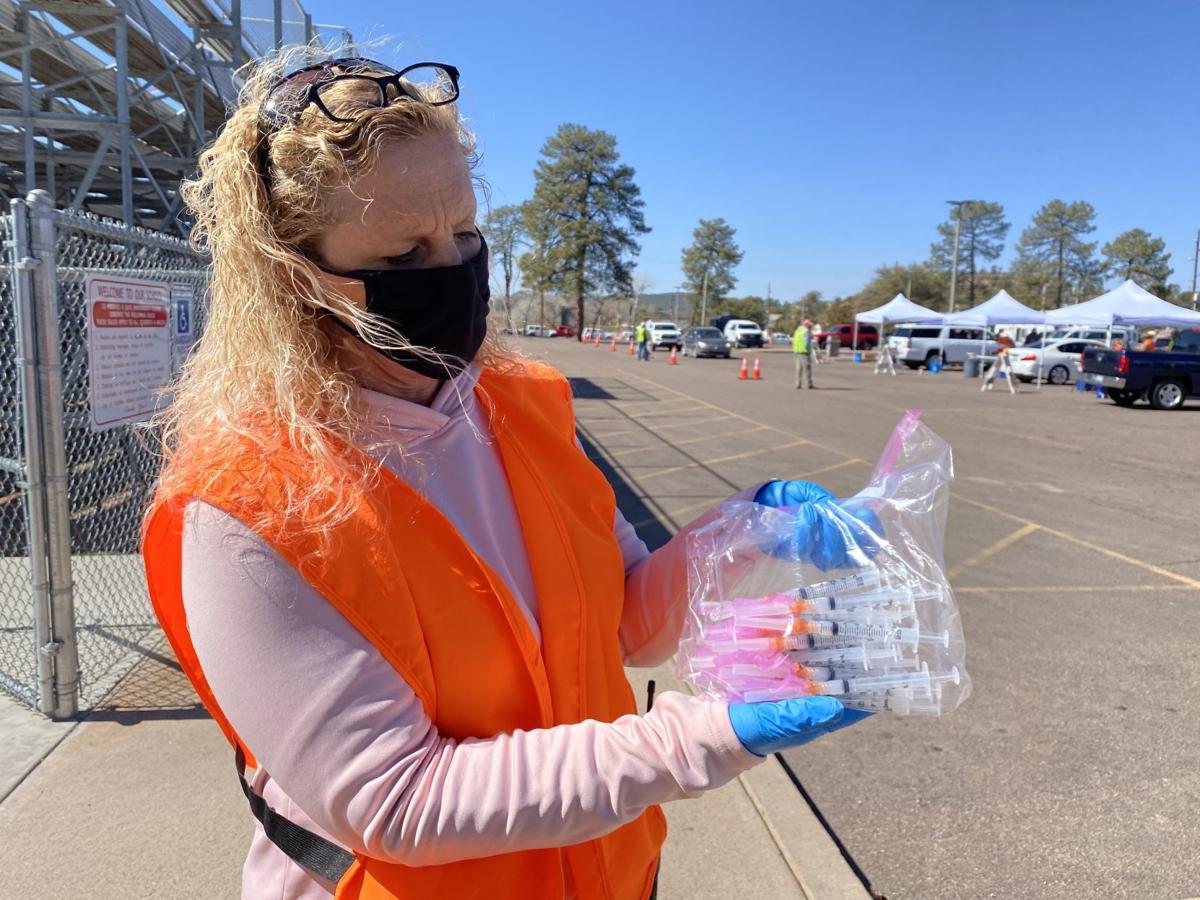 Paula Horn, Deputy Director of Gila County Health holds up a set of 10 syringes. Gila County has received the Moderna shot. Each vial holds up to 10 doses, but could have 11, said Horn. Staff has 6 hours to get a shot in an arm once a Moderna vila has been opened. 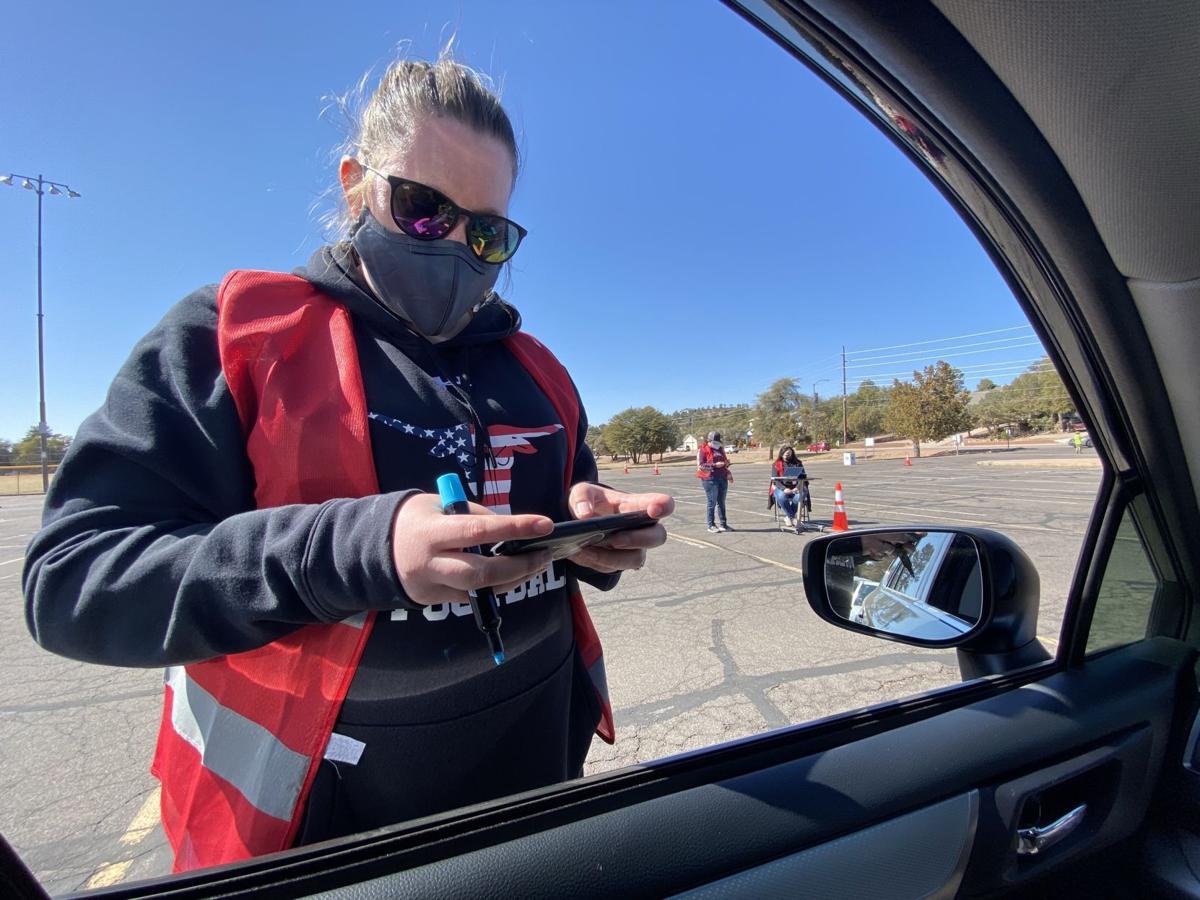 Nicole Archibald, in disease prevention with Gila County, donned the role of a greeter at a Feb. 27 vaccination clinic in Payson. 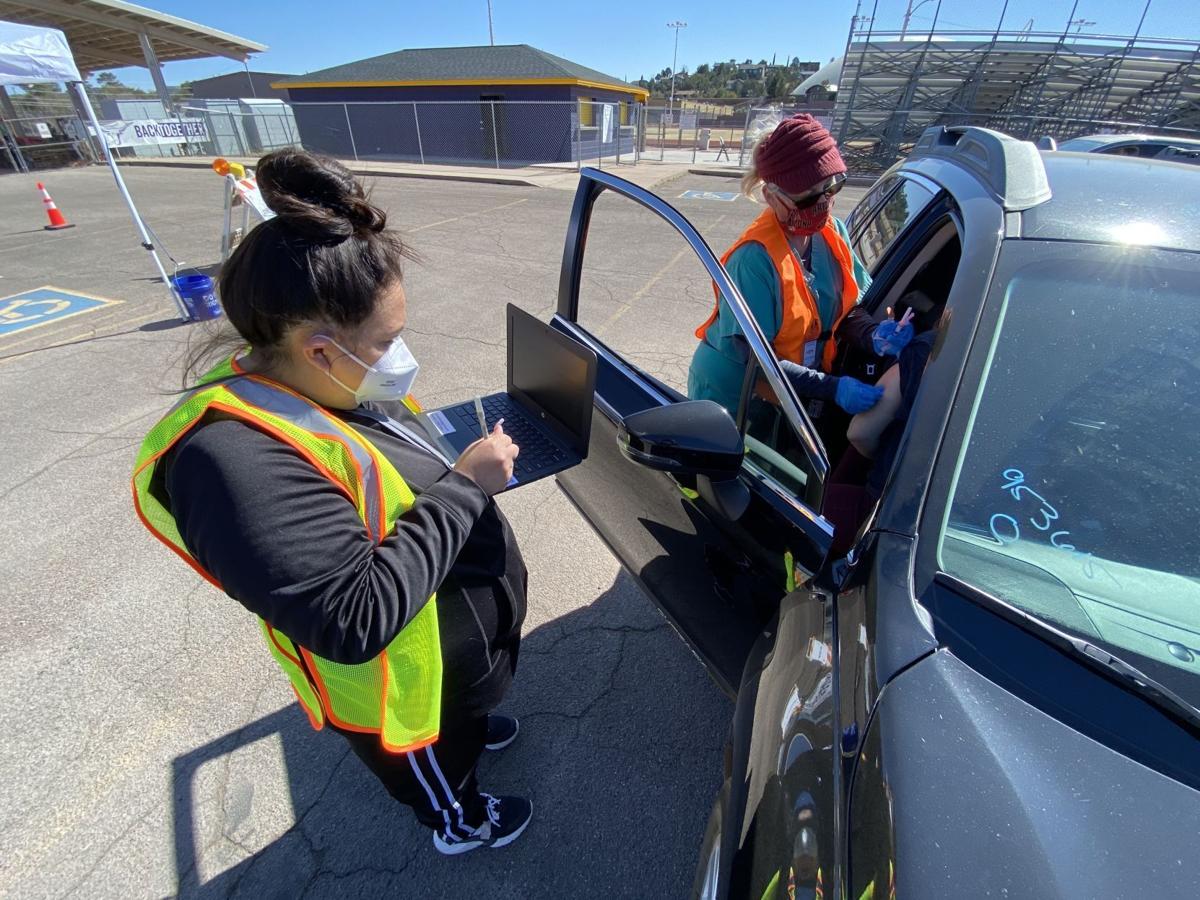 Taylor Perez, a communicable disease specialist from Gila County, fills in information on a patient as Heidi Hess, a pediatric nurse, gives a dose of the Moderna vaccine at the Feb. 27 vaccination clinic held at Payson High School.

A couple receives their first COVID vaccination shots Saturday at Payson High School. Because it was a drive-thru clinic, many brought along passengers, including their dogs.

Paula Horn, Deputy Director of Gila County Health holds up a set of 10 syringes. Gila County has received the Moderna shot. Each vial holds up to 10 doses, but could have 11, said Horn. Staff has 6 hours to get a shot in an arm once a Moderna vila has been opened.

Gila County’s first COVID vaccine clinic for the general public was a smashing success this weekend, with 1,900 doses of the Moderna shot administered.

Gila County is one of the first counties in the nation to make appointments for anyone who wants the shot, which confers 95% protection from the virus.

That’s so far ahead of the national curve that Michael O’Driscoll, director of Gila County Health and Emergency Management, got a call from The New York Times last week on how they pulled it off.

In an interview with the Roundup, O’Driscoll credited the partnerships including county contractors, health care providers and MHA Foundation for the speed of the vaccine roll-out.

“We reached out to Cobre Valley in the south and Banner, Ponderosa Clinic (MHA Foundation), Genoa, and later Dr. Askari in the north,” he said.

Those hospitals and doctors’ offices have ramped up vaccination rates to 1,000 per week.

Many rural counties don’t have a hospital partner, much less two. This leaves the work to underfunded and understaffed county health systems.

“In La Paz, they are struggling,” said Josh Beck, the county’s lead for the response to the pandemic.

But the other secret weapon Gila County had was the early decision for the health department and the emergency response department to work together.

“A lot of counties don’t run them together,” said Beck. “The ones who do, have seen the benefit.”

Health departments struggled because they have little experience running an emergency.

“Pandemics don’t come every 10 years or so,” said Beck. “Everybody is in the learning process.”

To ramp up, O’Driscoll asked Todd Whitney, the former head of Gila County’s Health and Emergency Management, to assist with the pandemic.

“We knew by bringing Todd back, he knows Chief Staub and military affairs. We were able to get National Guard troops and vaccinate immediately,” said Beck.

Whitney has years of experience in law enforcement and emergency management. He learned that in order to make an event go off smoothly, everyone needs to understand how it works. He consulted with his 10-year-old daughter on his traffic flow plans.

“If she didn’t understand it, I knew I had to go back to the drawing board,” he said.

His work paid off. From the patients, to the health care and county staff to volunteers helping with traffic flow, all praised the smoothness of the event.

Hour after hour from 9 a.m. to 6 p.m. a steady flow of cars filtered through the Payson High School parking lot. Staff clocked it took a typical patient 23 minutes from the moment they checked in, until they drove out of the parking lot with a shot in the arm and a health check.

These drive-thru clinics hosted by the MHA Foundation and the county provided thousands of shots, which has moved Gila County from the hot spot in the nation for cases, hospitalizations and deaths, to the first in the state to open up vaccinations to the general public.

But with shots given out each week at a steady pace, Gila County Health officials say they’ll soon run out of people ready to get a shot.

“If you get the shot, studies show you will not die if you get COVID,” said Beck.

That means health officials are imploring residents to continue to wear masks in public and to avoid crowds and large gatherings.