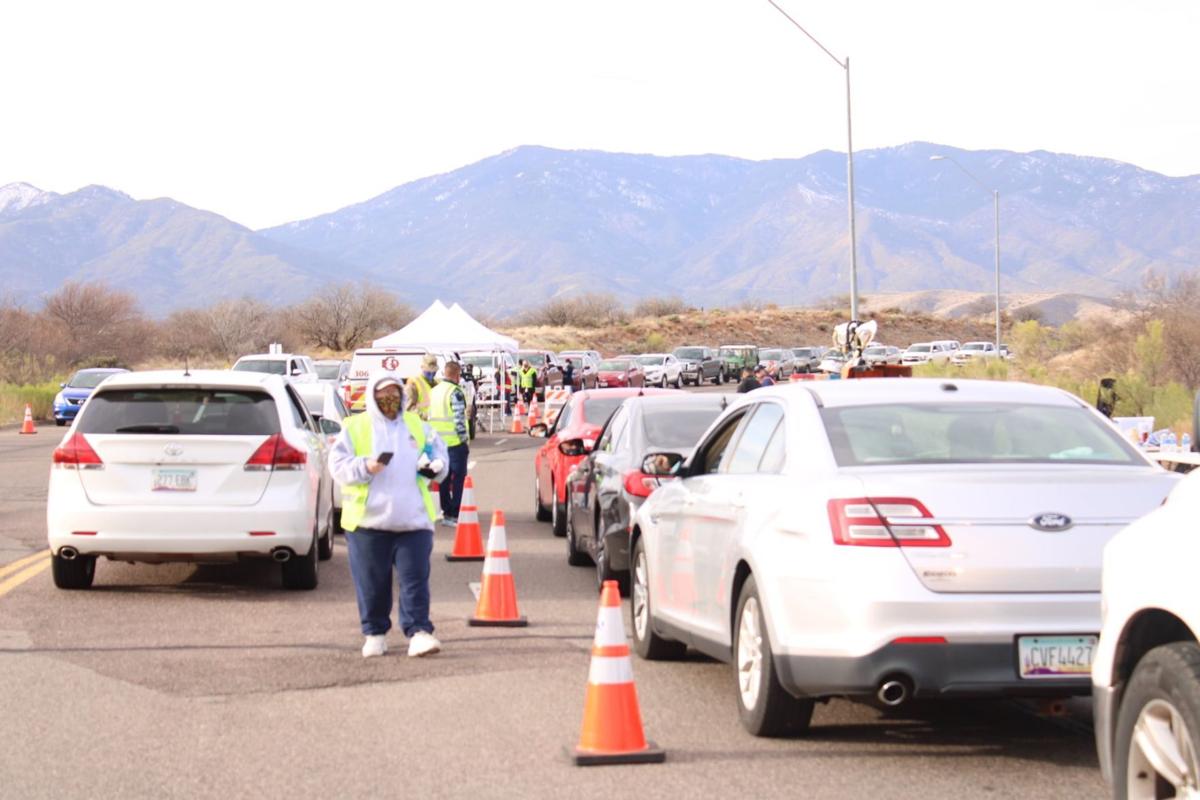 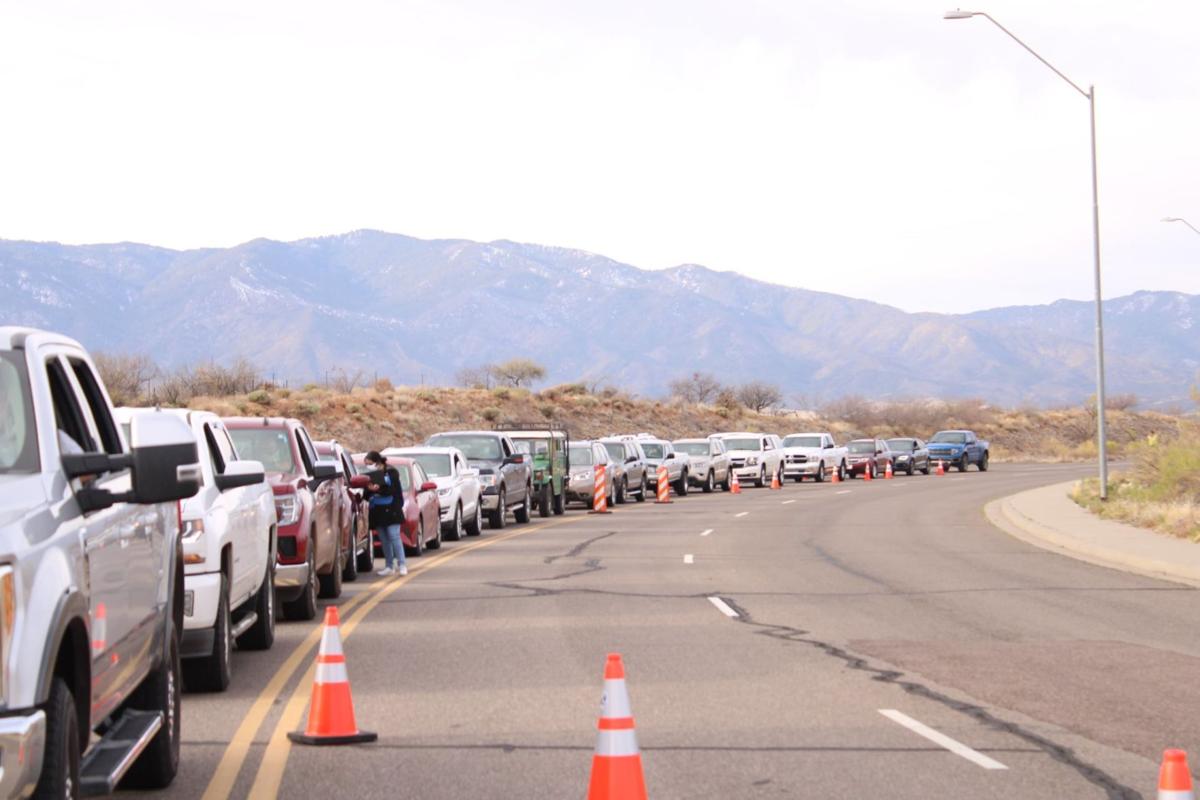 A line of vehicles for the Globe drive-thru vaccine clinic. 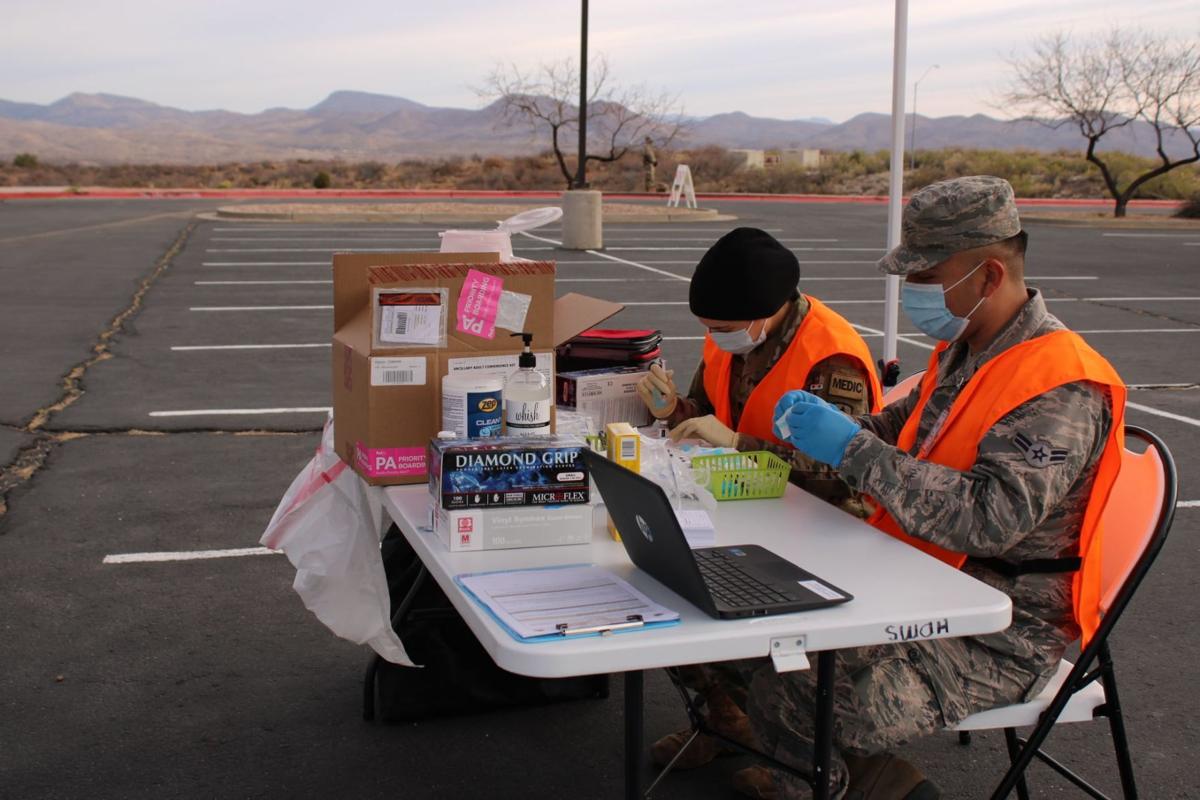 A line of vehicles for the Globe drive-thru vaccine clinic.

Gila County is leading the state. Not in confirmed COVID cases, but in getting the vaccine to all residents.

On Feb. 17, state health officials confirmed that Gila County is the first in Arizona to offer vaccines to all its residents.

That’s a much better distinction than the county enjoyed in January — when it briefly ranked as the county with the most per capita cases in the nation.

“After our discussions with ADHS (Arizona Department of Health Services) yesterday, it appears that we are the first county to move into partial (Southern Gila) ‘all residents’ and most likely will be the first to officially declare ‘all residents’ for the entire Gila population,” said Michael O’Driscoll, director of Gila County Health and Emergency Management.

As a result, the county will host its first general public, mass drive-thru vaccination clinic in northern Arizona on Feb. 27 and 28 from 8 a.m. to 6 p.m. at the Payson High School Football field.

Registration for this event is open; see information to sign-up at right.

New cases of COVID have plunged recently, though no one knows why, said O’Driscoll and Josh Beck, lead for the county’s pandemic response.

“I’ve seen a lot of guessing. We don’t have a good scientific answer why the cases are coming down so much,” said Beck.

The two officials give credit to their partners —the hospitals and private practitioners — that have provided vaccinations steadily each week.

That has allowed the county to open appointments to the general public. It’s the first step on the way towards vaccines chasing people rather than the other way around — and a crucial step toward opening back up.

“I’m beginning to see an end in sight,” said Beck.

It will still take a while for the vaccine numbers to provide “herd immunity,” when new cases have a hard time spreading and life gets back to normal.

Beck estimates that once 80% of the population has been exposed to the virus or a vaccine, the pandemic will fade. Until then, only widespread mask wearing, limits on big mass events and restriction on businesses that can create super spreader situations can prevent a fresh, lethal peak and suppress the case numbers.

Beck said the county will soon have to shift from rationing the shots based on supply to pleading with people to get vaccinated.

“You’ve really got three groups,” he said when it comes to those who qualify for the vaccine. At this time, clinical trails have not included children younger than 18. Children and teens are not nearly as likely to get infected or develop serious symptoms, so they weren’t included in initial vaccine trials. Those trials are underway now, but probably won’t finish up until later this year.

The first group is “more panicked” and gets the vaccine as soon as they can, said Beck.

The second group treats the vaccination like the flu shot, saying, “Yeah… I’m going to get mine.”

The third group will get the “shot when it happens.”

“Like your dentist appointment, if it’s due June 1st, that’s when they’ll schedule it. It’s not that they don’t want to get the vaccine, but they are not going to go out of their way to do it,” he said.

Public opinion polls suggest that perhaps 25% of people say they’re not planning to get the vaccine at all — for various reasons. Reaching herd immunity will likely depend on reducing the number of people who say they feel that way.

The two officials have crunched the numbers to understand when Gila County will reach their target vaccination numbers.

“Roughly our goal is 60%” vaccination rate of the population who can receive the vaccine,” said Beck.

Estimating from census numbers, Beck believes about 34,000 people are old enough to receive the vaccine in Gila County. Based on that, county health has vaccinated about a third of the population that could get a vaccine.

In addition, about 6,300 people have already been infected — roughly 11% of the population. So once the 21% already vaccinated get their second shot — we’ll be up to 30% of the total population protected against infection.

Moreover, some Gila County residents might have gone down to Phoenix for a shot at one of the massive stadium clinics run by the state health department, further boosting the protection on the long path towards herd immunity.

Either way, Gila County is pulling ahead against the pandemic.

And that’s likely just in time. Epidemiologists are tracking the spread of new, more infectious, possibly more lethal strains of the virus. So far, the current vaccines also provide strong protection against those new strains, although perhaps not the 95% protection conferred against the current dominant strain.

Beck and O’Driscoll hope the community signs up for the Feb. 27 — 28 clinic in Payson.

This clinic is by appointment only. To

schedule an appointment, call one of the county's call center numbers between 8 a.m. and 5 p.m. Monday through Friday.

If all lines are busy, you may get a message saying the line is disconnected. Please hang up and try again in a few minutes.