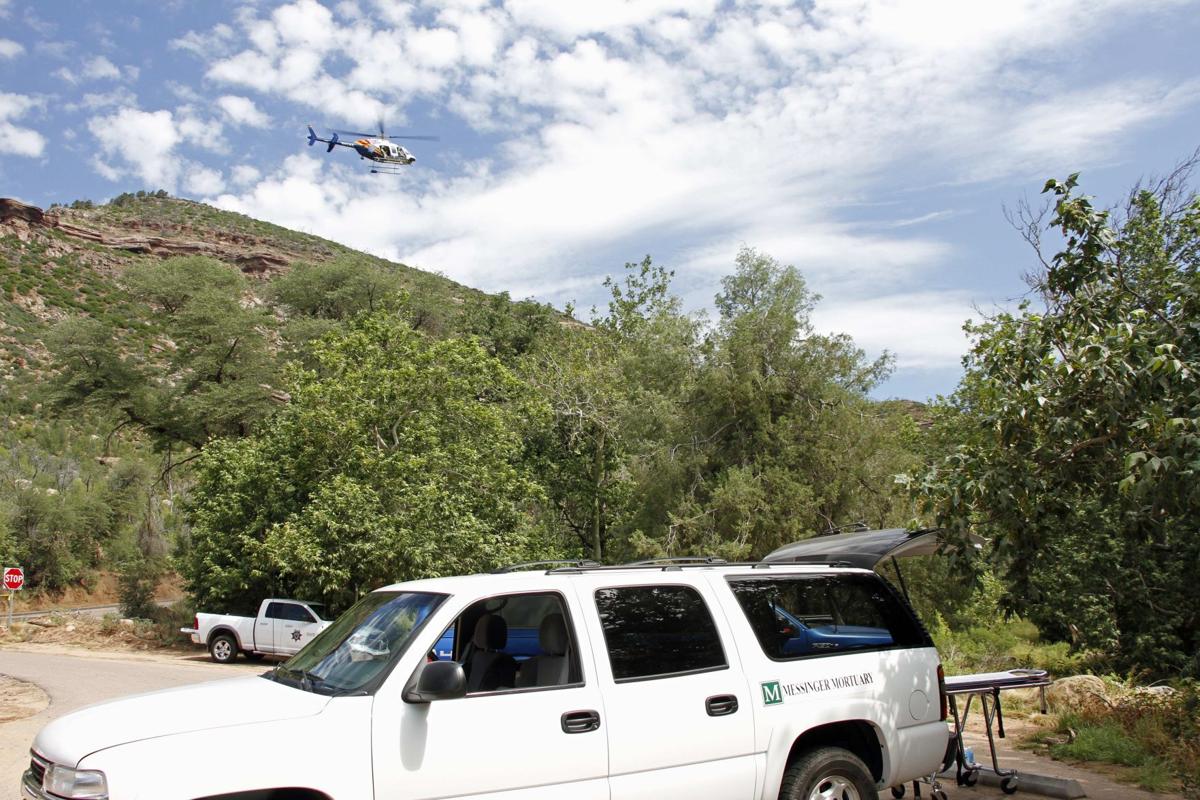 A Department of Public Safety helicopter (above) hovers over Water Wheel Sunday after a flash flood carried 14 people downstream Saturday. At left, a pair of socks left on a boulder in the Water Wheel parking lot. Below, the floodwaters passed under the bridge at First Crossing before ebbing. 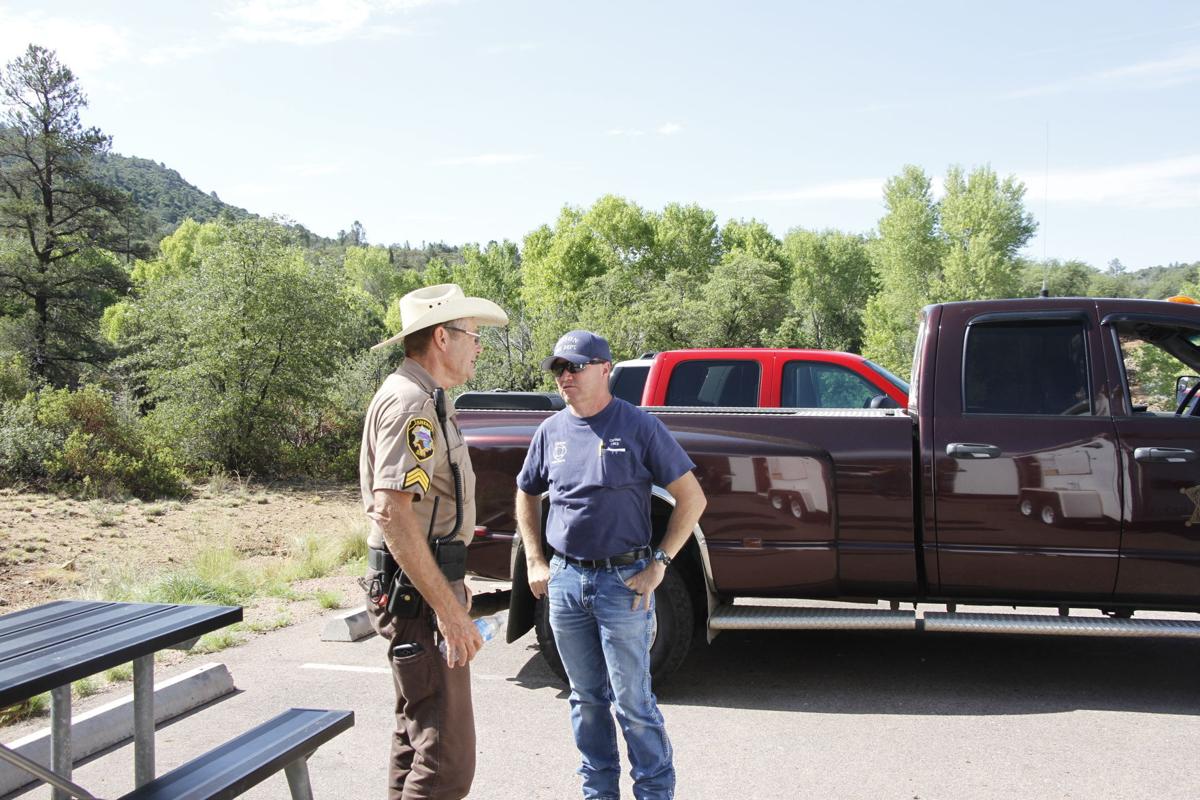 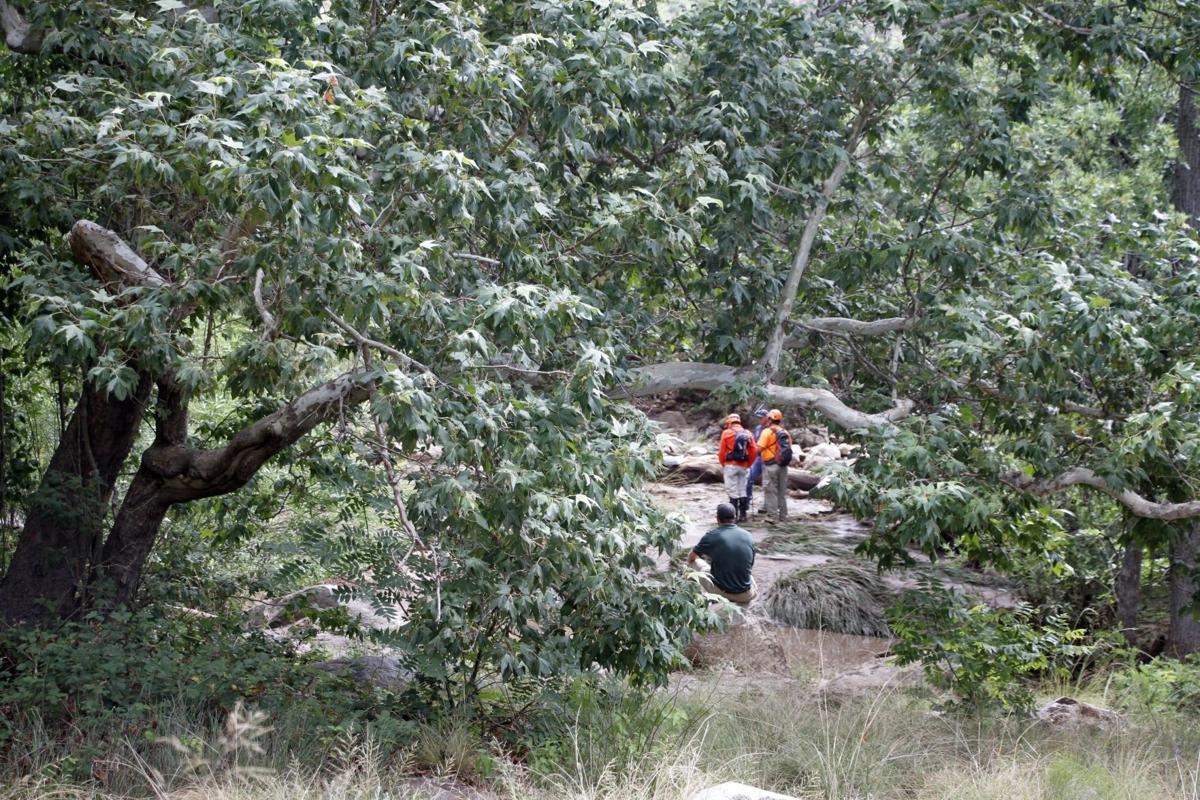 Tonto Rim Search and Rescue volunteers search near Water Wheel the morning after 10 family members drowned in a flash flood at the Water Wheel recreation area. 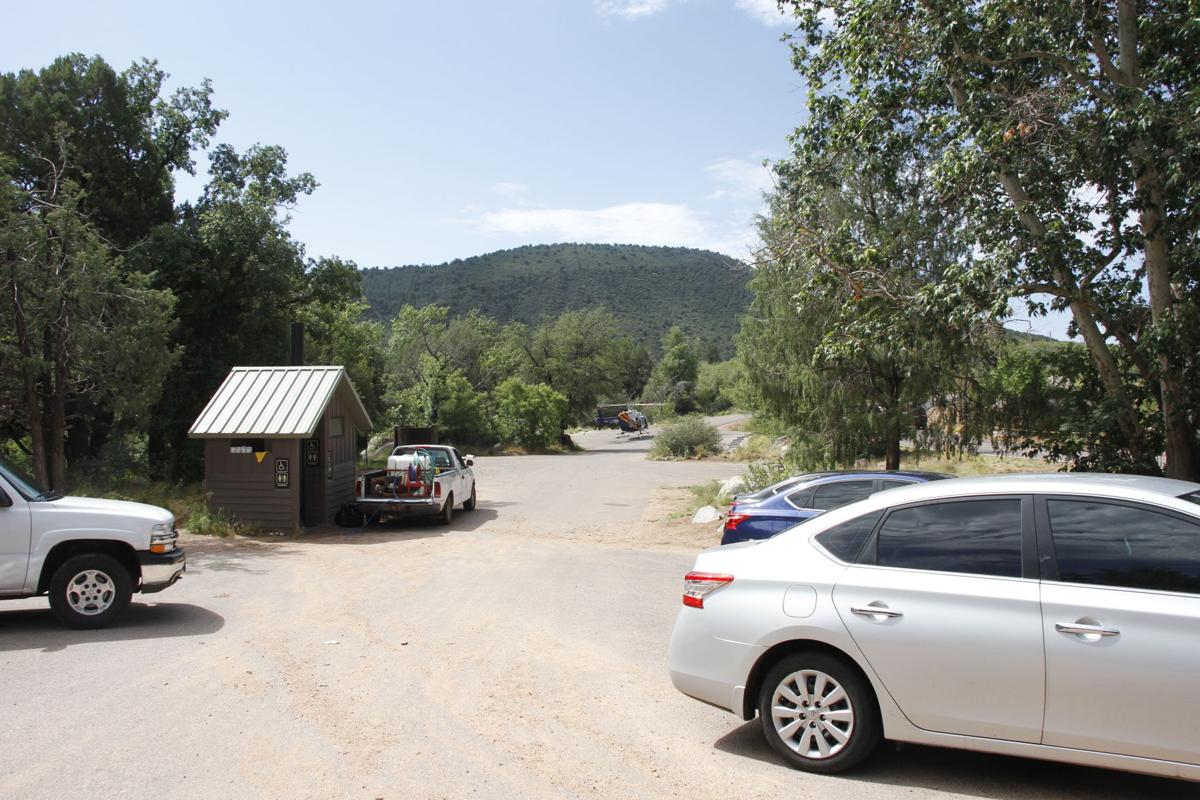 A group of 14 was swept down the East Verde River after a flash flood Saturday. Their three vehicles (right) were parked in the Water Wheel parking lot. 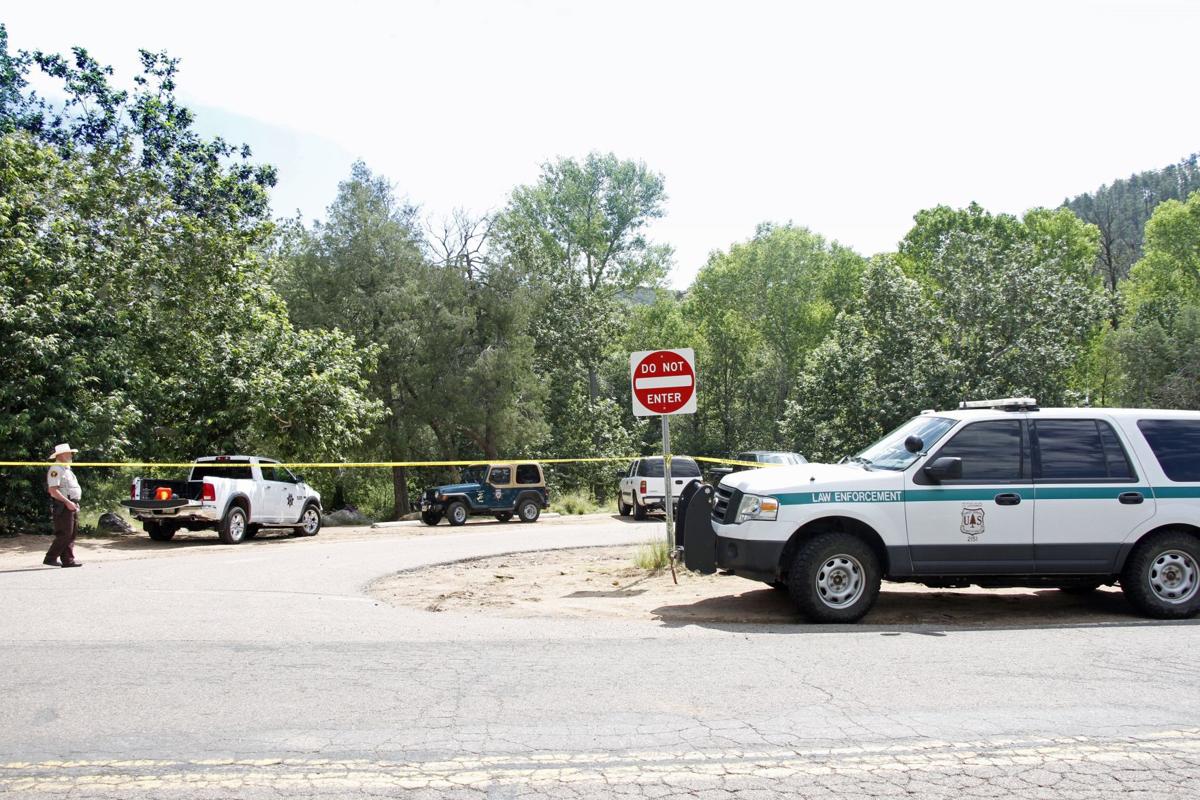 The Water Wheel parking lot was blocked off Sunday along with First and Second Crossings. 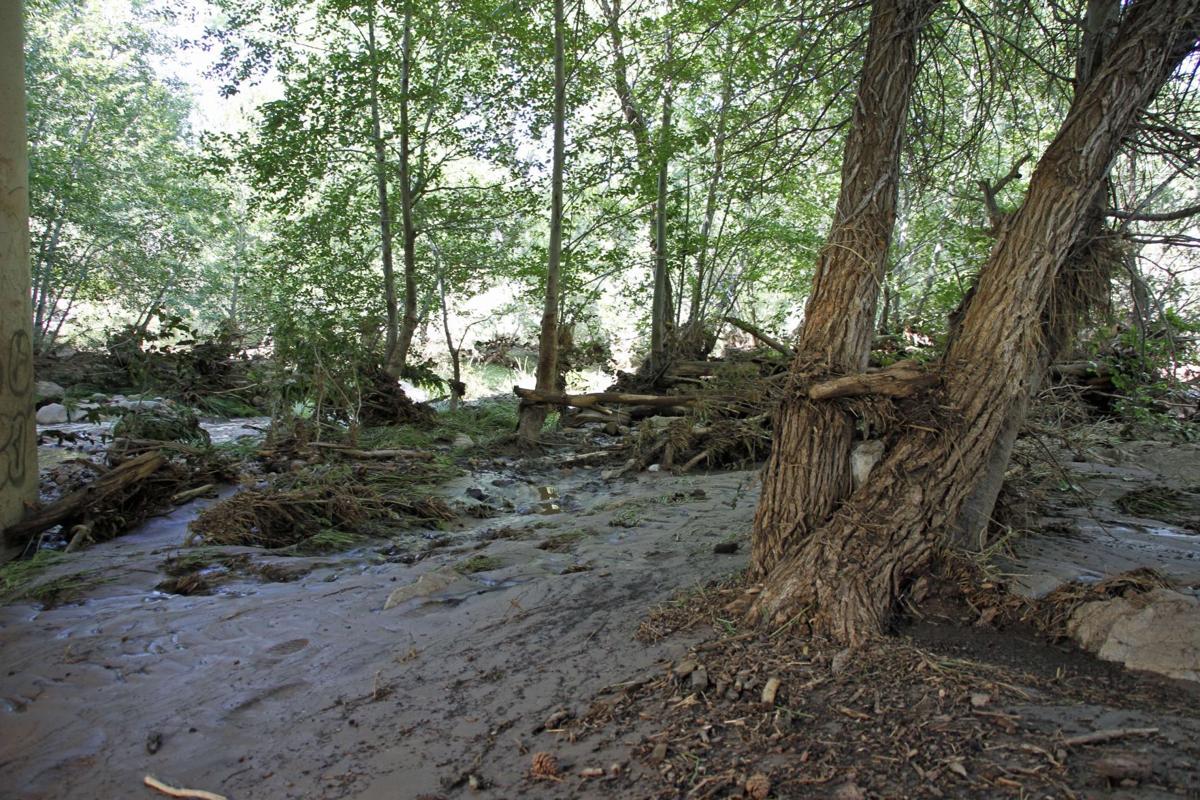 The creek under the First Crossing bridge Sunday afternoon after a flash flood ripped through Saturday.

Floodwaters rushing off slopes denuded by the Highline Fire killed 10 people on Saturday as water loaded with logs and debris rampaged down Ellison Creek and into the East Verde. Those killed were members of a Valley family celebrating a birthday with a dip in a creek that draws hundreds of swimmers every weekend.

The normally docile stream turned into a murderous chaos of black water, logs and debris. By the time the flood subsided, it left debris in branches of trees on shore six feet above even the swollen river level.

The fatal flood echoed the lethal flood that followed the Schultz Fire in Flagstaff, which killed one girl, and underscored the long-term impacts of wildfires that burn so hot they sear the soil and dramatically increase erosion in the tangled, overgrown forest.

The National Weather Service issued flash flood warnings for Saturday, Sunday and Monday in the region.

The debris-laden floodwaters carried more than a dozen people downstream, all friends and family members gathered to celebrate the birthday of a woman whose entire family was consumed by the flood.

Heroic efforts by rescuers aided by a Department of Public Service helicopter saved four. Rescue team members and volunteers spent most of Sunday pacing the creek with walking sticks and dogs to locate 10 others who had gone missing, with renewed flash flood warnings in place.

By nightfall Sunday, nine bodies had been found, but a 27-year-old man was still missing.

Searchers were back out at 6 a.m. Monday looking for Garnica’s body.

The GCSO and medical personnel were called to Water Wheel around 12:30 p.m. Saturday for a Girl Scout that had suffered an allergic reaction. Rescuers had to carry the child out on a litter, which took several hours.

Just as crews were getting back to their vehicles, several commented on the dark clouds that had gathered overhead. They were glad to be getting out of the area.

“We got her out just as the rain came,” said GCSO Sgt. Dennis Newman.

Rain soon turned to hail and the storm swamped Payson and the Rim Country.

“It was a humdinger,” said Newman of the storm.

The shores of the East Verde River were packed that day with water-goers, many swimming and others fishing.

About 3:15 p.m., a man called dispatch after his friend got stuck by rising floodwaters midstream on a boulder at the Cold Springs swimming hole. Newman arrived on scene and made eye contact with the man. He called for swift water rescue resources to help pluck him out of the river.

“While I am looking at him I have other search and rescue guys showing up and they are saying, ‘Hey, we are hearing people hollering for help further down stream closer to the confluence of East Verde and Ellison Creek,’” Newman said.

“We started finding people clinging to trees,” he said.

Rescuers found a father holding a child and using a tree to keep from washing downstream and an 8-year-old out on a rock. A Flagstaff DPS Ranger helicopter picked them up and carried them to safety. The mother was airlifted out to safety as well, but Newman did not know where she was located.

Someone then reported to dispatchers that they had found a body below the falls at Water Wheel, less than a mile downstream from where Newman was working to rescue the man that was originally reported stranded.

On the edge of the swollen creek floated the body of an adult female.

GCSO Det. Karen Baltz and Newman investigated and then had the body removed.

“We handled that and it wasn’t long after DPS finished up, getting everyone out of the water. Then we asked them to fly the river and that is when they found our second subject, an adult male, between First Crossing and Water Wheel,” he said.

The third body located on Saturday was a child found near the First Crossing bridge. On Sunday morning, rescuers found a fourth body near the Beaver Valley community.

Beaver Valley residents, some auxiliary members of the Community Emergency Response Team (CERT), told the Roundup they had never seen so much wood flow down the river before.

Albert Masterson, who lives along the river, said he was outside, heard a roar and recognized that a flash flood was coming. A week earlier, a storm had hit and flooded the creek briefly.

Sandy Mexal also heard the storm from her home in Beaver Valley and came out to watch a four-foot wall of logs and sludge roll past. The water was black and moving very quickly. Some estimates put the speed of the water at more than 40 miles an hour.

Much of the debris likely came from the Highline Fire, which burned north of Water Wheel in June below the Rim, charring 7,000 acres. That fire burned in the same area as the Dude Fire 27 years ago, which killed six firefighters.

Mexal said the stream was two to three times wider than it normally runs.

Masterson jumped on his quad and drove down to the lower water crossings, where he told several people fishing to move out of the area as a flash flood bore down on them. They moved to the sides and watched the rush of debris flow past.

Upstream, rescuers were busy trying to get the Valley group out of the water.

By nightfall, the search was suspended.

The Arizona Republic reported that family members walked along the creek later and found a child’s body. Newman said he was not aware of the family locating a body.

Tonto Rim Search and Rescue and the GCSO resumed their search Sunday, sending several teams of four out to look through the mud for the other bodies. All of the bodies were recovered by nightfall except for Garnica.

The victims’ three vehicles sat parked in the Water Wheel lot. Police had to disconnect one of the batteries earlier because the storm had set one of the car alarms off.

Newman said it appears the group of 14 arrived sometime Saturday and hiked about three-quarters of a mile upstream to an area known as the “beach” to swim.

In August last year, rescuers were called to Water Wheel after a flash flood stranded two boys on the other side of the creek. TRSAR used an inflatable kayak to shuttle the boys across safely.

Capt. Tim Rice with the Payson Fire Department said the tragic event is one of the most deadly to occur in recent times in Rim Country.

First Crossing after the flash flood

First Crossing after the flash flood

The area under the First Crossing bridge Sunday morning. A flash flood swept through the area Saturday afternoon, carrying 14 down the river.