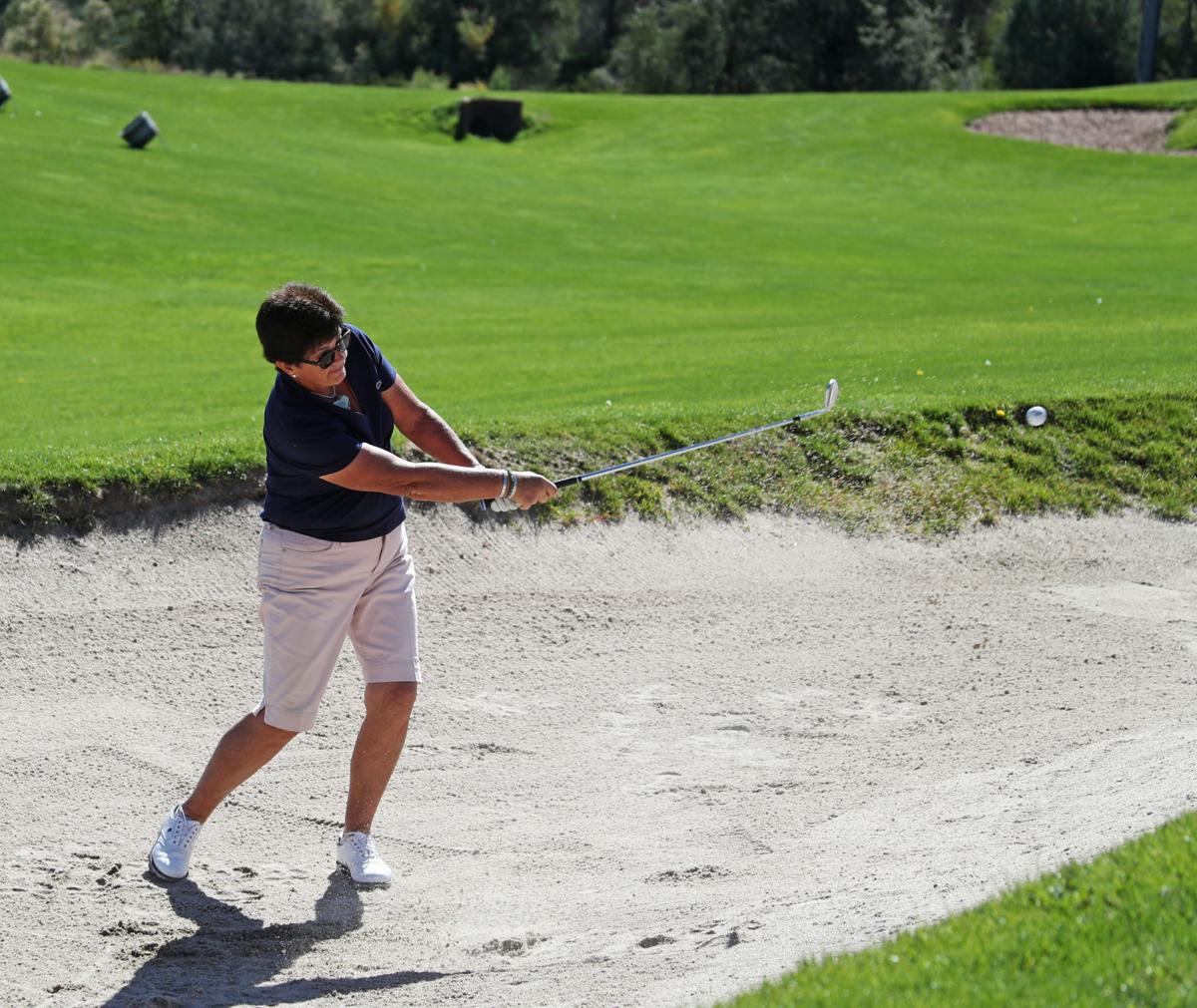 One of the 12 professional golfers who took part in the tournament practices shooting from the sand trap before action began. 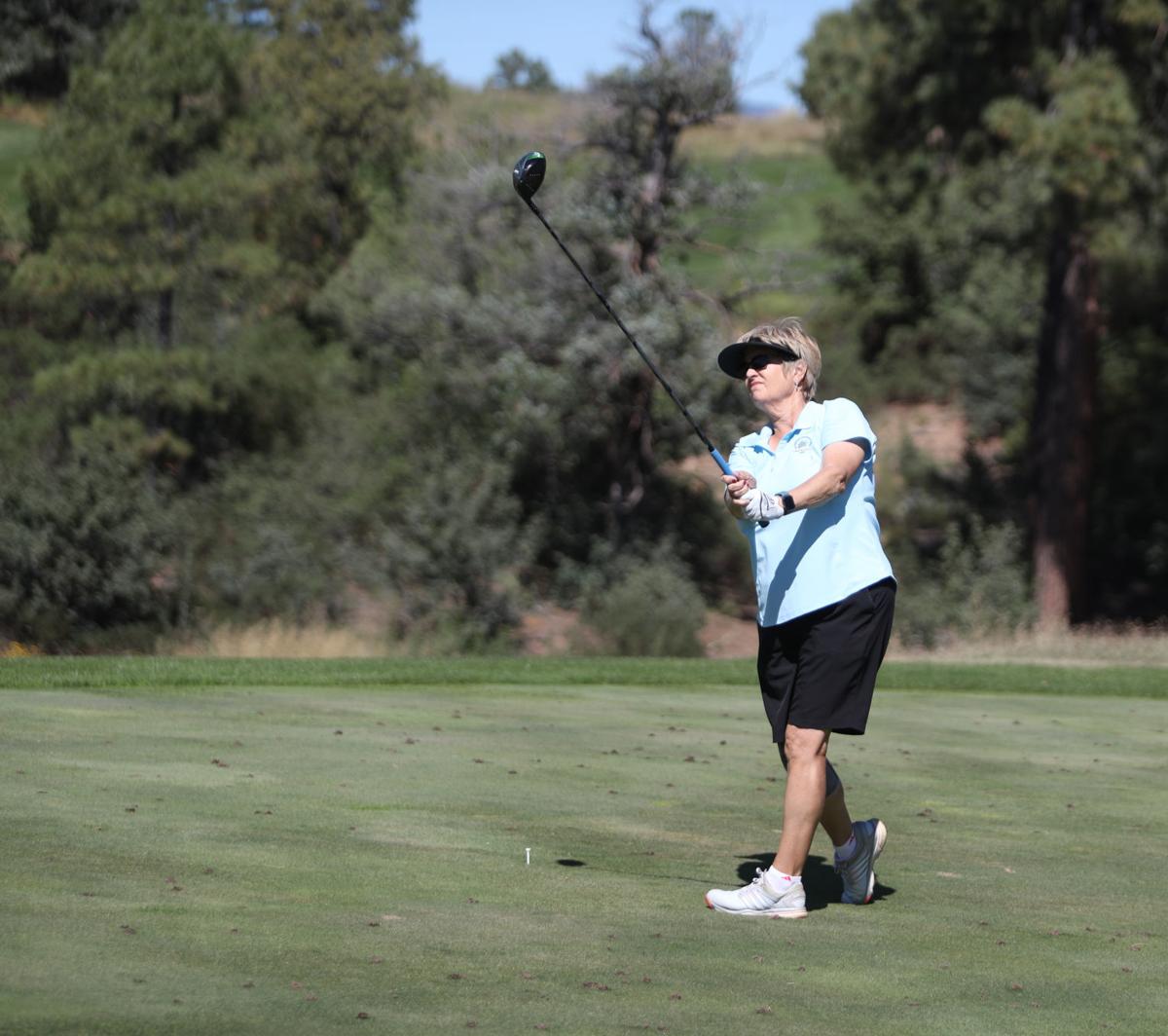 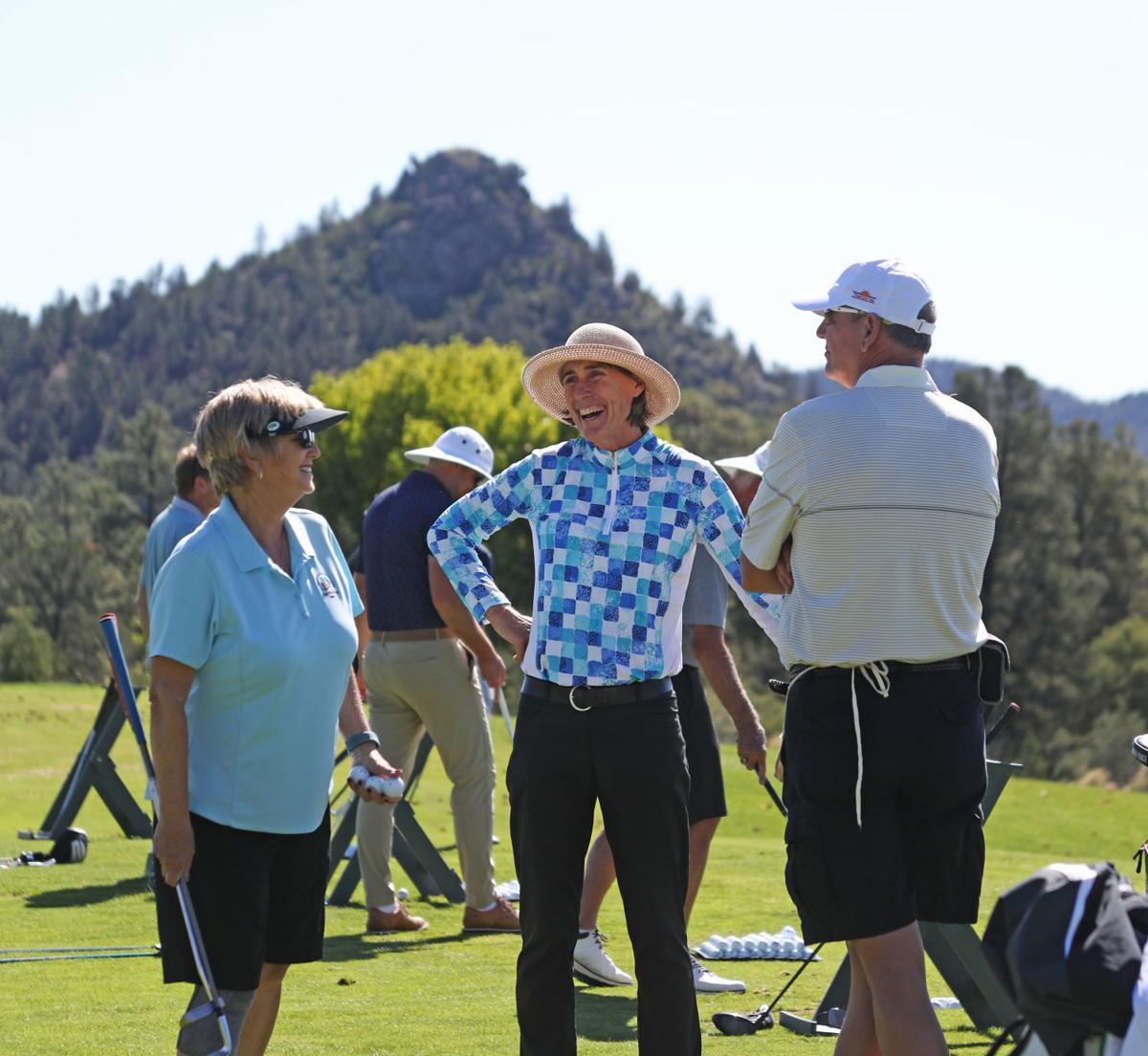 Jane Crafter (left) shares a laugh with fellow professional golfer Christa Johnson on the driving range before the start of the tournament. 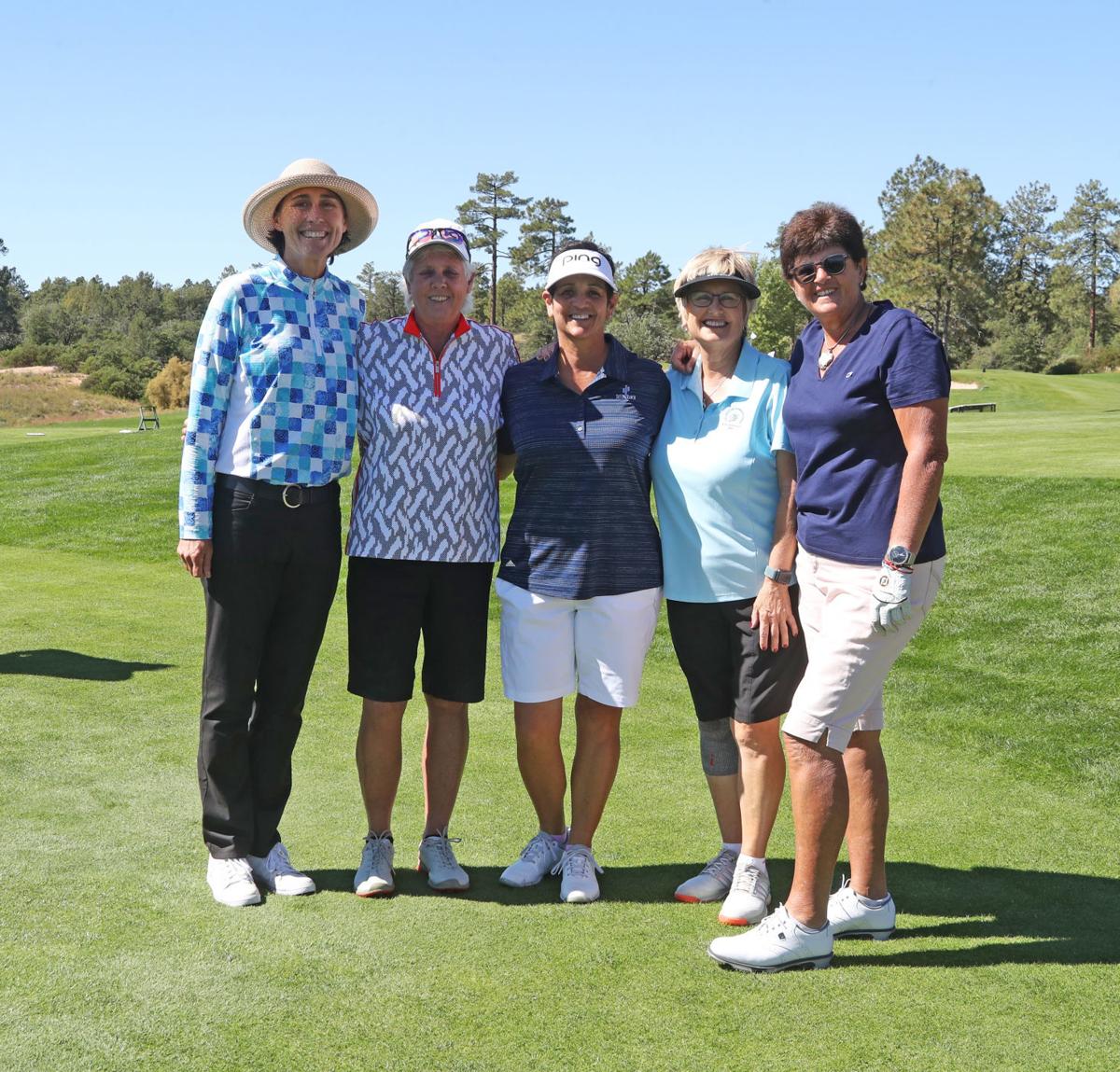 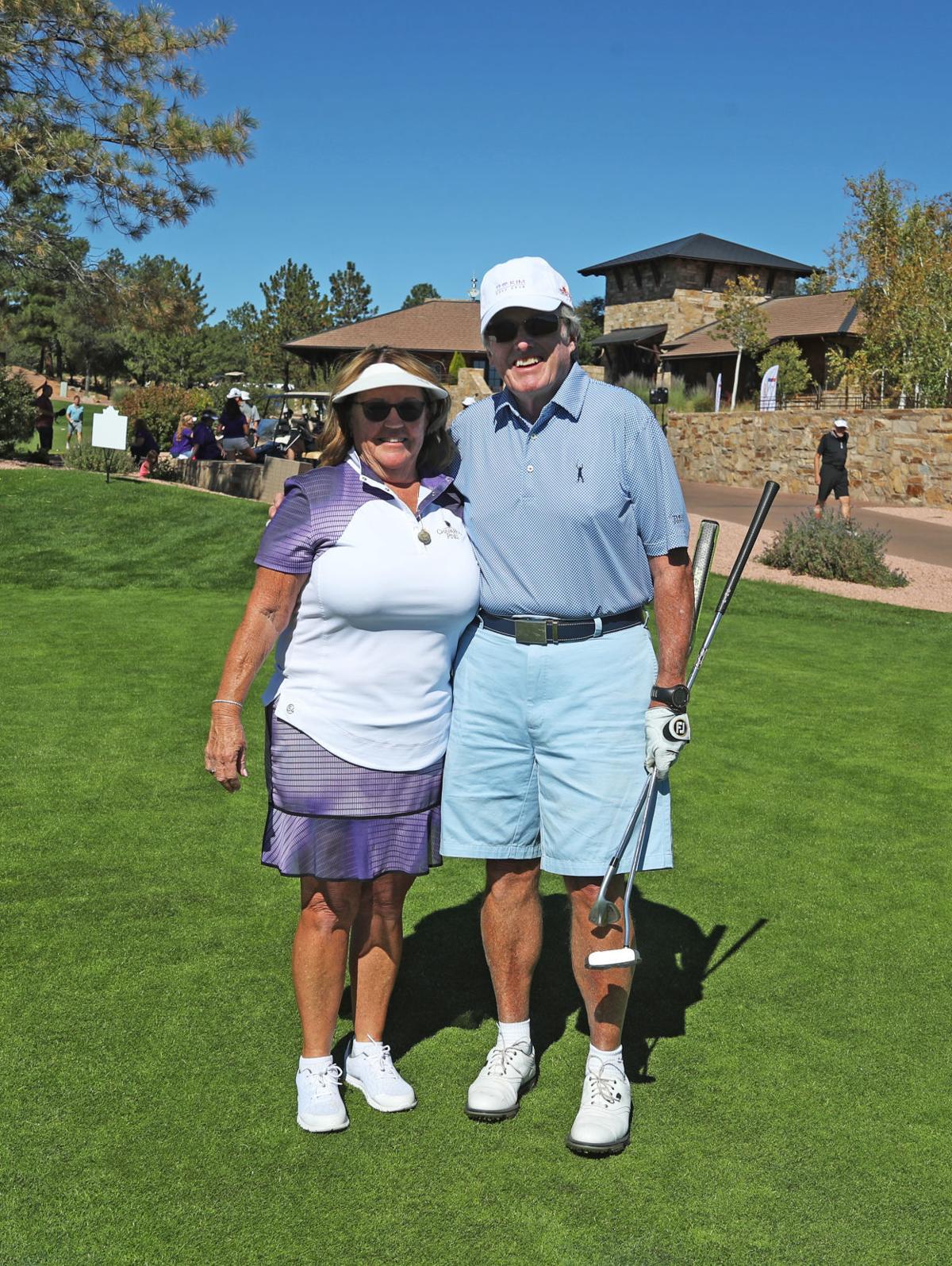 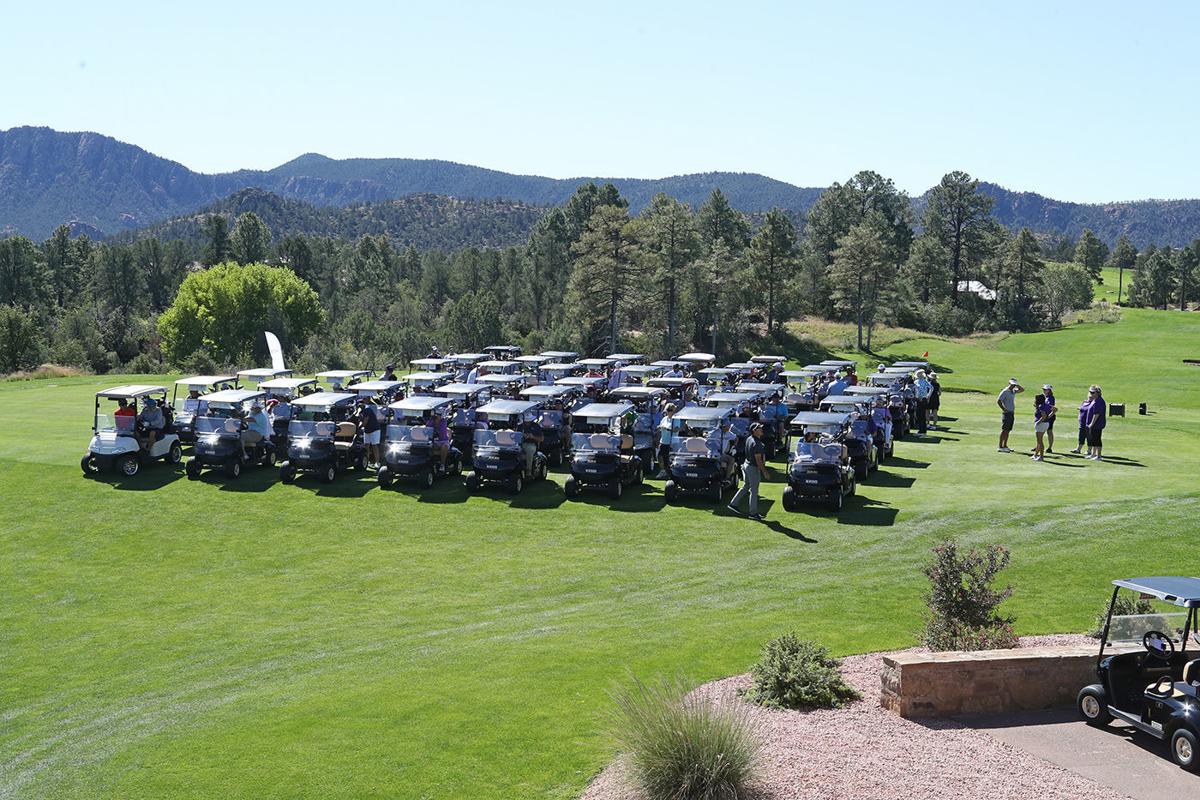 One of the 12 professional golfers who took part in the tournament practices shooting from the sand trap before action began.

Jane Crafter (left) shares a laugh with fellow professional golfer Christa Johnson on the driving range before the start of the tournament.

A pair of TV news anchors.

A slew of professional golfers.

What’s that all add up to?

An innovative fundraiser that paired professional golfers and celebrities with duffers all for a good cause — helping women and children escape violent relationships.

But the real winners from the Time Out Charity Golf Tournament at The Rim Club on Saturday were the women and children who seek a haven at the Time Out Domestic Violence Shelter.

The nonprofit organization hopes to raise $500,000 in three years to build a new facility to house victims of domestic violence.

So they held a fundraising dinner and auction on Oct. 4 and a golf tournament on Saturday. Officials plan to make it an annual tournament. That seems inevitable since this one proved so successful.

“We will clear $325,000,” said Time Out board member Marilyn Knauss of the net proceeds from the two events.

Knauss thanked all those who stepped up to help.

“It’s amazing and we’re just over filled with joy and hope,” she said. “We’re overwhelmed. People have been so generous. They are amazing.”

For the tournament, each of the 15 groups of five included a celebrity or professional golfer.

Younan edged Christa Johnson in a playoff to win the tournament.

October is Domestic Violence Awareness Month, and it turned out to be a perfect day to hold the tournament with clear skies and temperatures in the upper 70s.

“We come up here all the time with our show and do Field Trip Fridays up here because we love the town and the people,” Pasmore said. “It’s just (a) gorgeous (course).

“Domestic violence is such a terrible thing. And it’s so prevalent in society. I was honored to be part of helping the shelter.”

Crafter is a Payson resident who played in the LPGA Tour, plays on the Legends Tour and works as a golf analyst.

She’s an honorary member at The Rim Club and she played a key role in getting some of her friends from the LPGA and Legends Tour to take part in the tournament.

“I’m not a full member (at The Rim Club) and I get privileges here even though I don’t have to pay anything,” Crafter said. “And I like to try and really help the membership, try and help the community whenever I can.”

She was happy to do whatever she could to help, especially after reading a recent article in the Roundup that said reports of domestic violence in Gila County are twice as high as any other county in the state.

“I didn’t realize how impactful this cause was,” Crafter said. “To me, that just underscores the need for a service like this for domestic violence, whether it be men or women or kids, whoever is needing the service.

“It costs a lot of money to do that, to include, you know, food and water and clothing and education and other resources. So, this is a great opportunity for all of us in the community here at The Rim Club, we’re getting people from all over and my buddies from the Valley have come up to support me and hopefully in the future I can corral a few more friends from the LPGA and Legends Tour to come up to help. I’m excited that my friends could come out and support this great cause.”

Christa Johnson, a former LPGA and WSGA golfer now playing on the Legends Tour, drove up from Tucson. She’s seen the effects of domestic violence.

“I think domestic violence has touched a lot of people in different ways and it’s definitely touched my life,” Johnson said. “It makes it all the more important to see people, women, children, even men, have a safe place to be while they make some transition into a different lifestyle or a different life.”

Ammaccapane, a Phoenix resident, has formed friendship with several of the women she’s golfed with professionally over the years. So she didn’t hesitate to take Crafter up on her invitation to participate.

She said she learned a lot about what Time Out does during the dinner the previous night.

“I thought it was pretty cool what they do,” she said. “I think it’s fabulous they have a place to go. I don’t have domestic violence in my family or know of anybody that’s had that, but I can’t even imagine how bad that could be.”

Flansburg’s show, “The Human Calculator” airs on The History Channel. He lives in Paradise Valley and also jumped at the chance to help a great cause and get in a round of golf at a great course at the same time.

“I think what we’re trying to do here to raise money to help people is much needed,” he said. “And when they mentioned we get to play golf at The Rim and we’re in northern Arizona, I just could not be happier to be here. I’m really excited to help. It’s just great to see the community come together for something that means so much.”

Pete Kennedy is the president of The Rim Golf Club Community Association.

“We wanted to show the community support for a local charity and Marilyn recommended the Time Out Shelter and we thought it was a great cause and much in need,” he said. “We’re delighted with how things have progressed.”

Younan, the head pro at The Rim Club, said this is just the start.

“We’ve got 75 players, which is amazing for our first year out here,” he said. “Hopefully, it continues to grow and the sponsorship still stays up.”