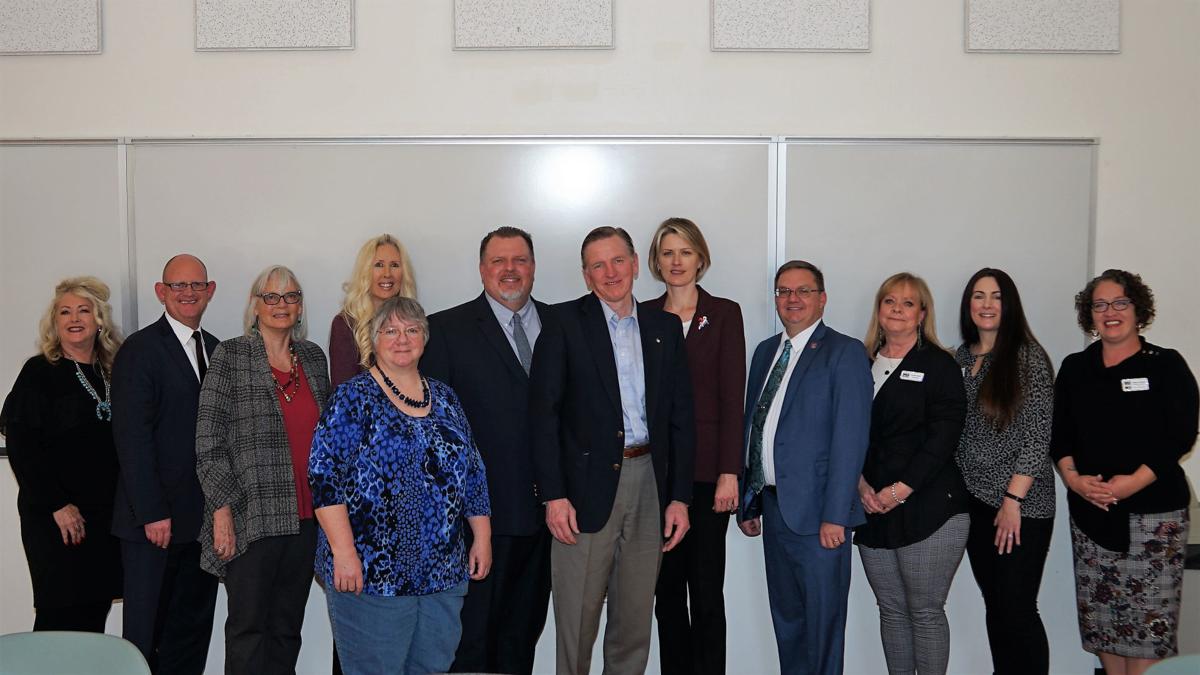 Congressman Paul Gosar met with a group of small-business owners Tuesday as well as the director of the Small Business Development Center, the EAC-Payson dean and two members of the Gila County Provisional Community College District Governing Board to tour the college campus and to discuss small businesses in rural communities.

Rep. Paul Gosar has closed his Washington, D.C. office and is isolated at home out of an “abundance of caution.”

Congressman Paul Gosar met with a group of small-business owners Tuesday as well as the director of the Small Business Development Center, the EAC-Payson dean and two members of the Gila County Provisional Community College District Governing Board to tour the college campus and to discuss small businesses in rural communities.

Rep. Paul Gosar has closed his Washington, D.C. office and is isolated at home out of an “abundance of caution.”

Congressman Paul Gosar and his staff invited area business and government leaders to a roundtable discussion last week. It was designed to give participants a chance to talk about what is working that helps economic development and alert the congressman to some of the obstacles.

Gosar’s chief of staff Thomas Van Flein acted as a moderator of sorts, opening the discussion asking if the many regulation roll backs of the Trump administration had impacted economic development.

Two men involved with ranching talked about regulations and the impact they have on their businesses. Darrell Stubbs said the plan to limit the far-reach of the Waters of the U.S. rule would benefit efforts to make water more available to stock. As the rule exists, it limits activity on every body of water, essentially federalizing all water. The plan to scale back the rule to just navigable waters and more clearly defined waterways makes it more reasonable. Another said the rules work when it comes to grazing until it comes to fencing and then it takes tremendous effort to get through all the hoops, consequently a lot of pasture can’t be used on forest allotments.

Another issue for area ranchers is the restrictions on slaughtering beef. Ranchers in outlying areas have to transport live cattle to processing plants and the travel can add up to $2,000 to their costs.

Shawn Dugan, who has Chevron Rim Liquor, pointed out it is hard to have a full time business in Rim Country because of the impact of winter, but with the closure of the Fossil Creek Road out of Strawberry because of federal rules, it’s making it even more difficult.

That turned the discussion to tourism. One rancher, who is also in the hospitality industry, said they see winter tourism with hunters. Scott Helmer, who has Rim Country Guns, said hunting is not as big as imagined since there is only a one in seven chance a hunter will be drawn for the area.

Stubbs, who is with the Payson Rodeo Committee, said while the rodeo is the oldest and one of the area’s biggest attractions, the committee wants to help bring more people in at other times of the year. He said the committee is presenting a motorcycle ride at the end of March and has secured Wrangler as a sponsor. Additionally the group is working with local motels to provide discounts on rooms to participants.

“We are working with people who are patriotic and family oriented,” he said.

Cameron Davis, former director of Payson Parks, Recreation and Tourism, said he and his staff created special events to keep people overnight. These included the Monster Mudda, the Hometown Fourth of July celebration, the Food Truck Festival and sports tourism events. He said they brought two large softball tournaments to town and generated a half million in revenue.

The discussion moved to taxing internet sales. Helmer said movement is being made at the state level to improve that situation with a proposal to tax a business that makes between $100,000 and $300,000 in internet sales in state. “I know no one wants to initiate a new sales tax, but we need to level the playing field,” he told Gosar.

“Congress has heard it (the internet tax issue) loud and clear, but it will be a tough walk. We’re staying on top of it,” Gosar said.

District One Supervisor Tommie Martin also talked about the internet and the county’s work to try to bring broadband service to all residents. “Internet is what power was 100 years ago,” she said. It is needed for “smart” houses and all the devices residents use at home and at work. With improved, reliable service the county will see economic growth, Martin said.

Van Flein asked Farrell Hoosava with the Tonto Apache Tribe about the casino’s workforce. The casino is the largest private employer in the town, but the community’s “workforce is nil,” Hoosava said.

“The cost of living is rising and it’s driving a lot of people away. There is no place to make a good wage. We have a transient workforce,” he said.

Because of the three different layers of oversight forced on Native casinos, it takes 30 days for an employee to be cleared for work — even it’s just to clean the bathrooms, he said. In Arizona, tribal gaming operations are overseen at the federal level, the state level and by the Tribal Gaming Commission. There are hundreds of people on those staffs, especially in the state gaming office, he said. However, in New Mexico, there are only two people in the state gaming office.

“It’s hard to keep employees and the work ethic is different,” Hoosava said.

The cost of living was a concern expressed by another business owner, Deborah Rose. “We have a huge problem with affordable housing. Only about 4% (of housing) is available to the working class.”

Gosar suggested Rose take advantage of the federal listing of inventory of federal lands that could be bought or traded in the area to provide a place to build affordable housing.

Offering an example, Michael Morrison, a former county and municipal government official in California, talked about securing Fort Ord for civilian use when it closed. They were able to make use of its hospital, providing more accessible care to the area’s veterans. It also had housing and school facilities the community could use.