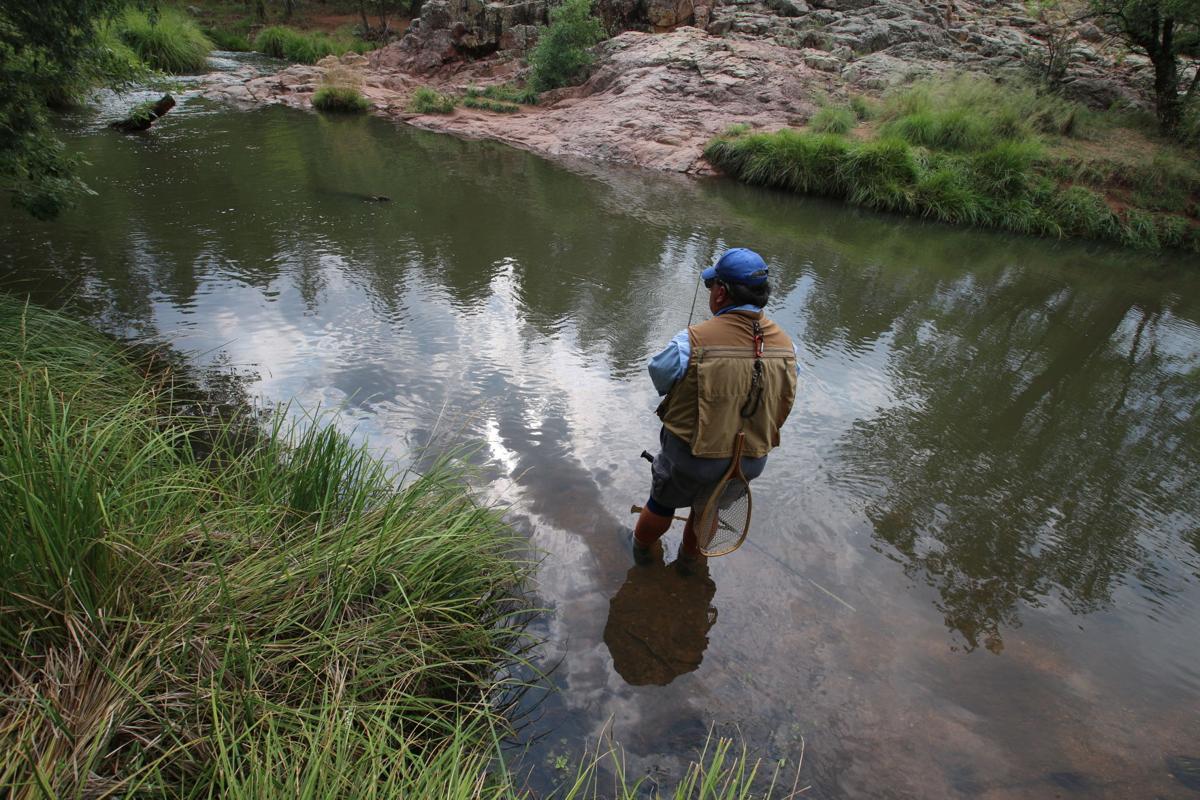 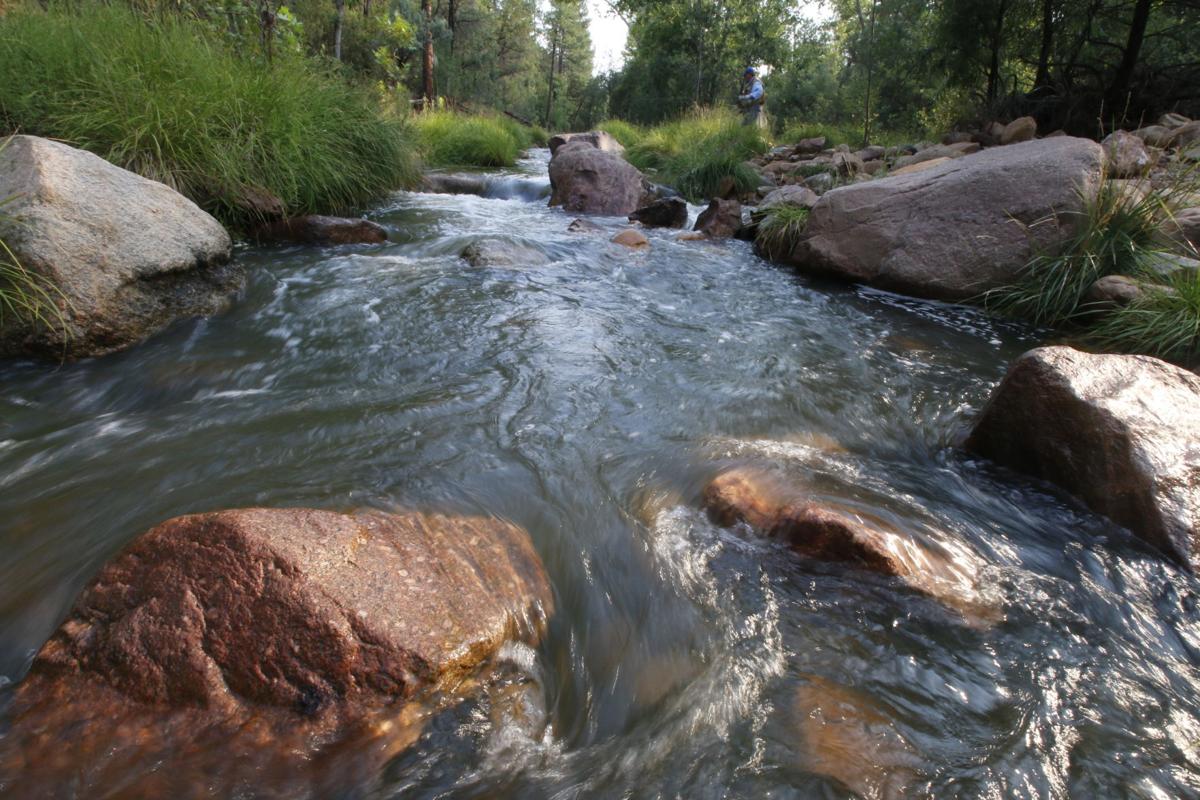 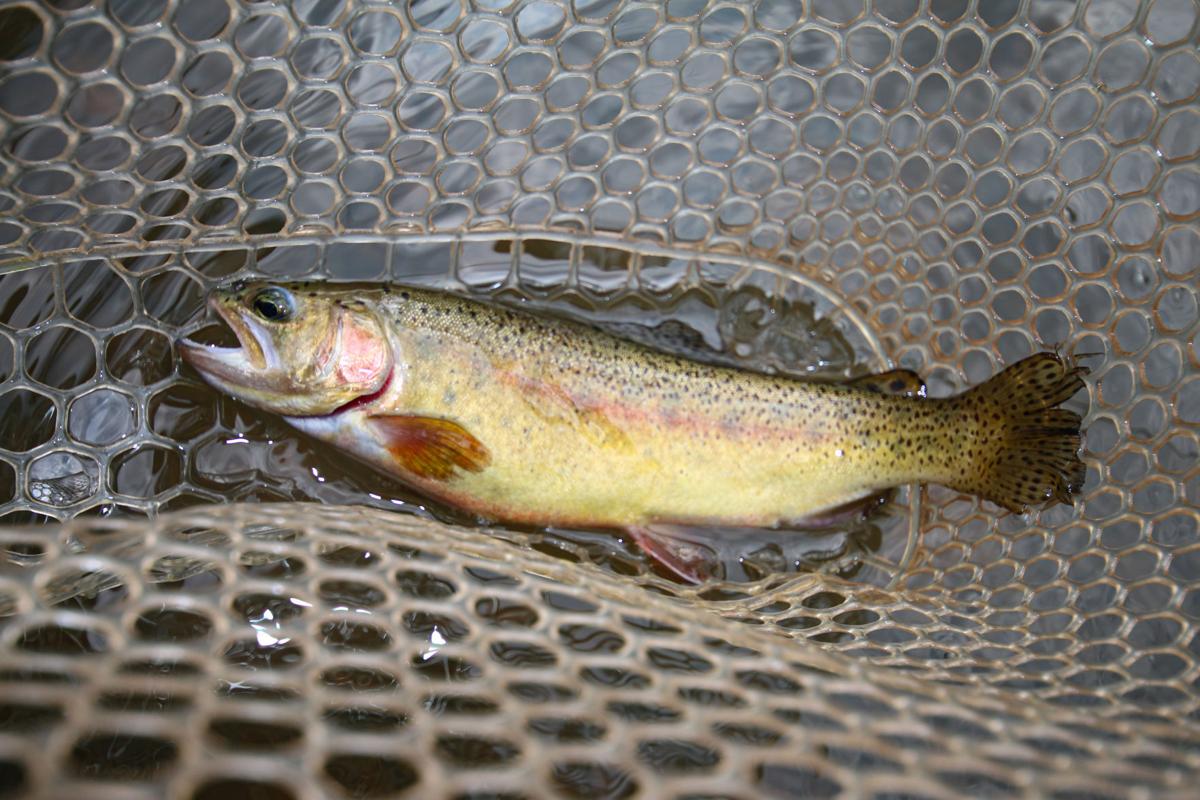 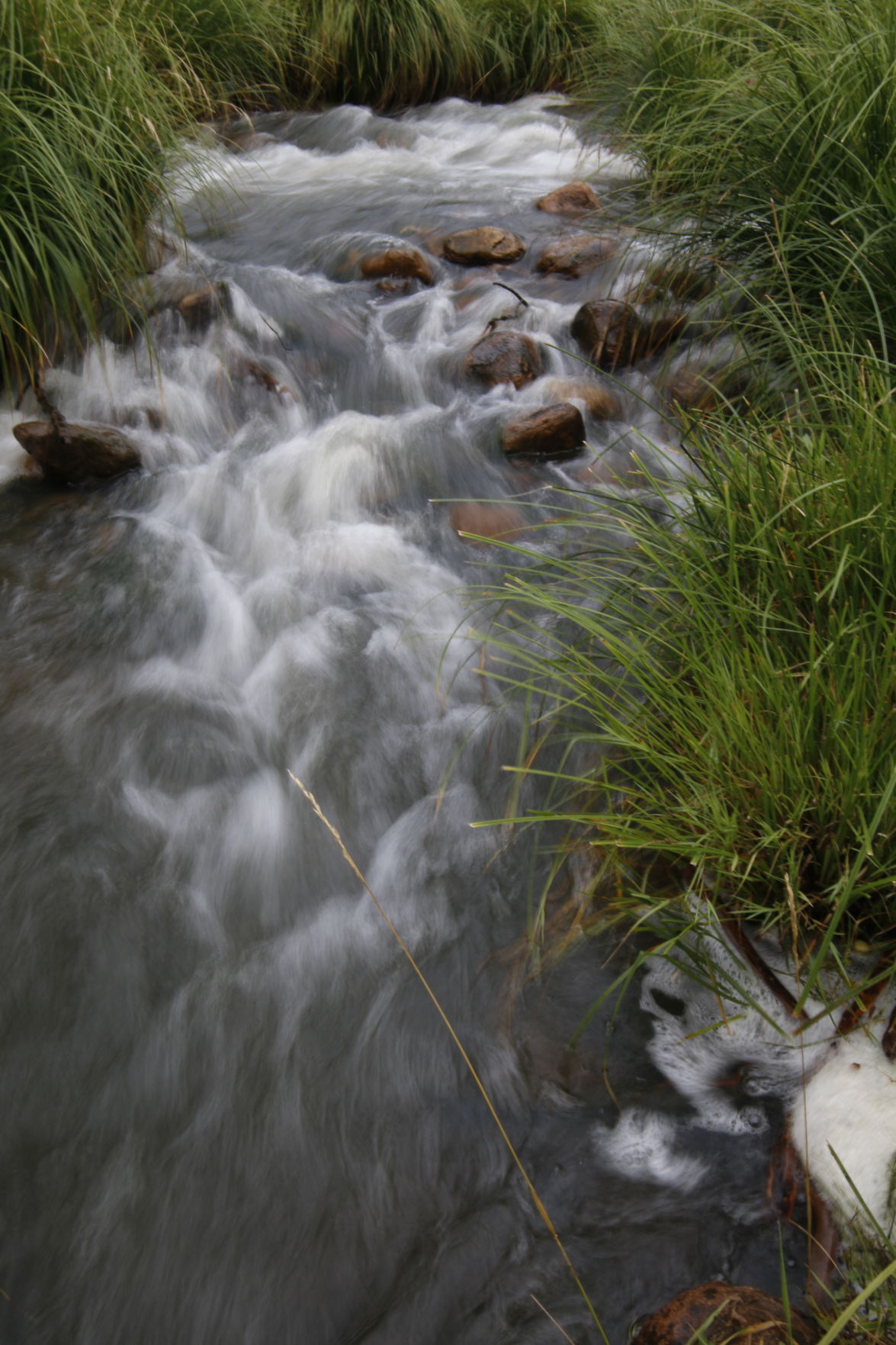 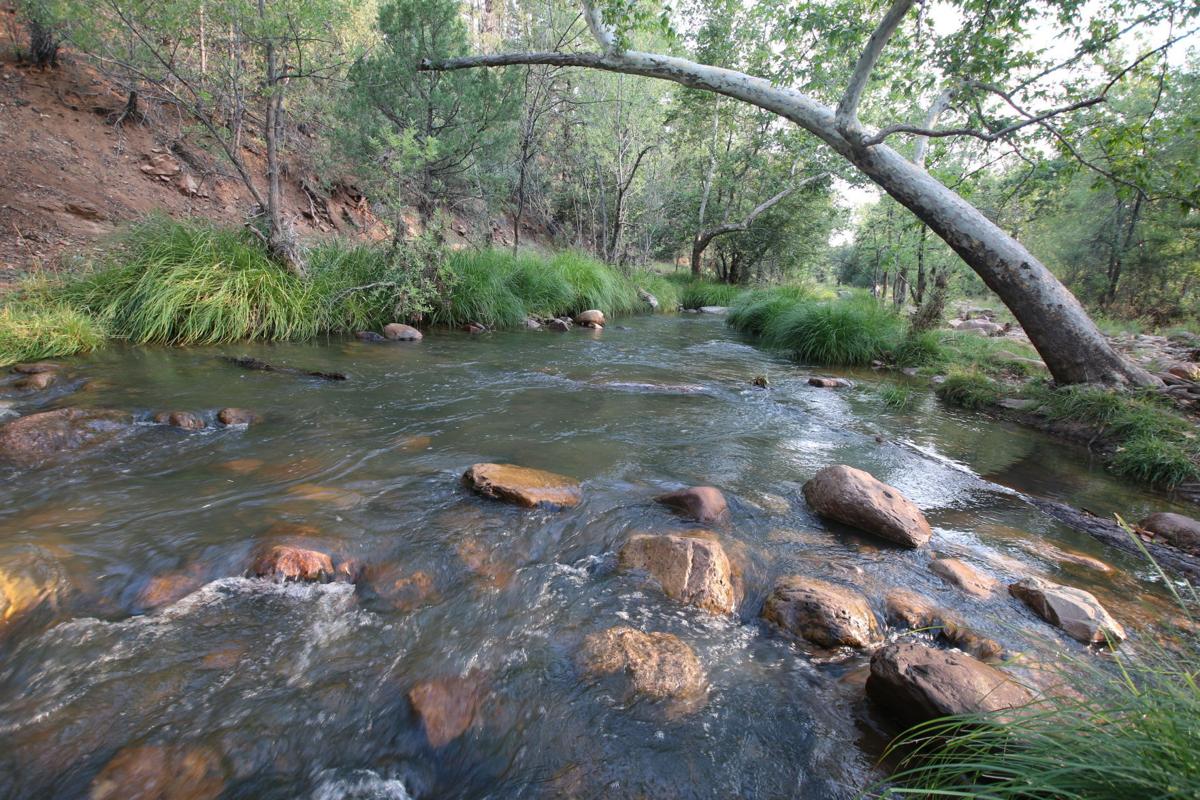 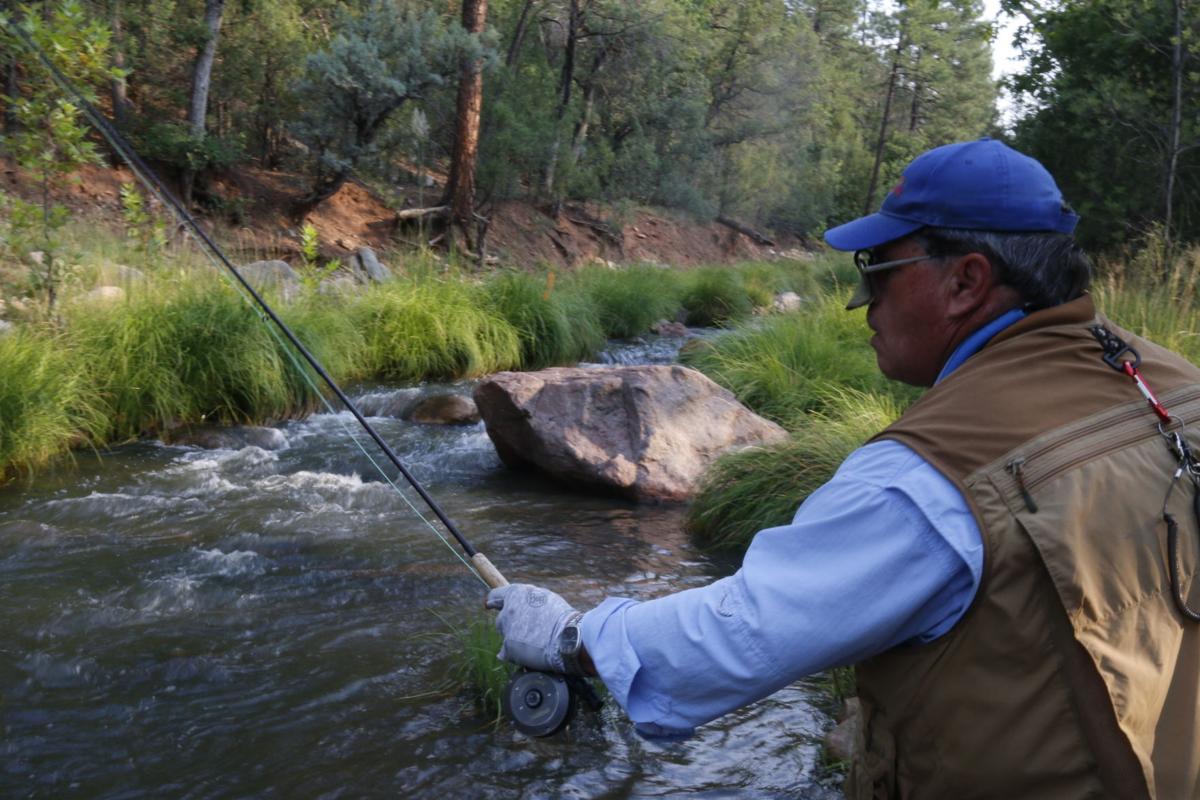 The garish orange strike indicator drifts between the undercut bank of the East Verde River and the mostly submerged rock.

This is remarkable. I mean, it’s right where I planned.

This, of course, would be more impressive if Jim Strogen hadn’t told me precisely where to cast and patiently corrected my aim for the previous four casts. A roll cast, if you must know.

But now my strike indicator floats serenely past where Jim says the comeback kid — a Gila trout — hungrily awaits. The strike indicator marks the underwater progress of two cunningly crafted nymphs, intended to invoke an emerging caddisfly or some such. Don’t ask me these details. Ask Jim.

The strike indicator abruptly disappears beneath the surface.

I set hook and holler.

The gleaming-gold, flushed-red trout fights me all the way to my net. Well, Jim’s net. Stop interrupting and just listen to the story.

A moment later, he stares at me — astonished.

“Don’t look at me like that,” I say, feeling ever so slightly guilty. “Just be glad you’re back.”

Granted, we came within a nymph’s knuckle of exterminating the Gila trout, what with our wells, dams, logging, cattle grazing and reckless planting of brown and rainbow trout. But, hey, we’ve also begun to return this gleaming, hard-fighting, wary native Arizona trout to the wild.

I work loose the barbless hook. The Gila trout continues to regard me with lidless surprise.

“Jeeze. A little gratitude,” I say, releasing the little fellow back to the gurgle of the stream as gently as possible.

Jim looks on, resisting the temptation to shake his head. He understands fish better than I do my children, but I have yet to see him talk to them.

But this is a big deal — bonding with a Gila trout. You can do this in only a couple of other places on the planet.

Our two species traveled a long and twisted path to this moment.

The beautiful, nearly extinct Gila trout dates from a long, proud line. One recent research paper reconstructed the history of the rainbow trout in the 100 million years since a rare “genome doubling event” — which means some ancient ancestor accidentally ended up with twice the normal set of genes. The geneticists were all excited about this rare discovery. Tracking the long, slow editing of the doubled genes taught them all kinds of interesting stuff about evolution, most of it well over my head. The rainbow and Gila trout are kissing cousins, close enough to interbreed. They’re both salmonids, which includes salmon, char and trout. That line goes back several hundred million years — and actually includes another DNA doubling event.

Trout have proved masters of adaptation. They started as ocean-going fish. Salmon and steelhead trout still spend a chunk of their lives in the open ocean. Their ancestors discovered the advantages of swimming up rivers and streams to reproduce, rather than trusting their eggs and fry to the tender mercies of a long list of ocean-going predators. So trout spread all over the world and wriggled up river systems — evolving many different populations. Most species have lost their taste for salt water — through another amazing set of adaptations.

The Gila and Apache trout millions of years ago colonized Arizona rivers and streams, forsaking the ocean forever. Early American settlers reported finding streams teeming with both native trout species in the 1800s.

Alas, we nearly wiped them out. In the past century, we’ve degraded or dried up more than 90% of Arizona’s riparian areas. We drowned them beneath reservoirs, unleashed cattle to trample the banks, drained water tables, entrenched streams, and as a final blow released brown and rainbow trout into most of the surviving streams. The fish-eating brown trout gobbled up any small Gila trout they could find. The heavily stocked rainbows bred with the survivors, swamping their genes.

So after decades of neglect, we’ve finally atoned. Fish experts have learned to grow the skittish Gila trout in hatcheries — including the Canyon Creek Hatchery below the Rim.

This year, Arizona Game and Fish started stocking the East Verde with catchable Gila trout. Fish managers had teamed up with the local chapter of Trout Unlimited to make a series of stream improvements to make the East Verde more homey for the Gilas. Unlike stocked rainbows, the Gilas aren’t sterilized. So they can hopefully establish a reproducing population in the East Verde, with help from cold, clear water released from the C.C. Cragin Reservoir.

Now, as the stocking season winds down, I spend the morning sloshing around after Jim, the fish whisperer. He’s a former elementary school principal and science teacher, I’m a journalist with a short attention span, so his discourse on fish psychology, hunting strategies and the astonishing life cycles of caddisflies, stoneflies and dragonflies mostly washes right over me.

The indicator vanishes again and I pull in another hapless Gila.

Jim unhooks him. I lean over the net.

I address the Gila trout sternly. “Really. I’m on your side. I just want you to be more careful about what you snap at.”