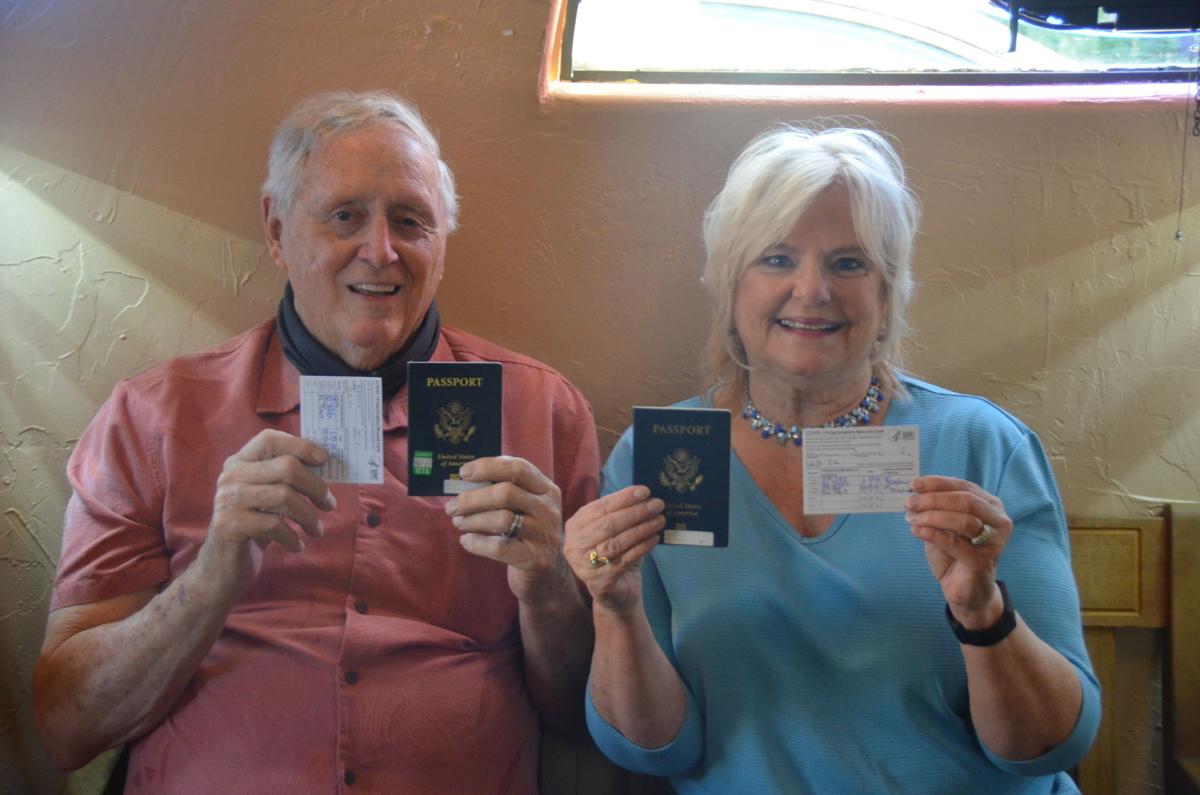 Larry and J.J. Hannum with their COVID-19 vaccination I.D. cards and passports as they are planning a road trip. 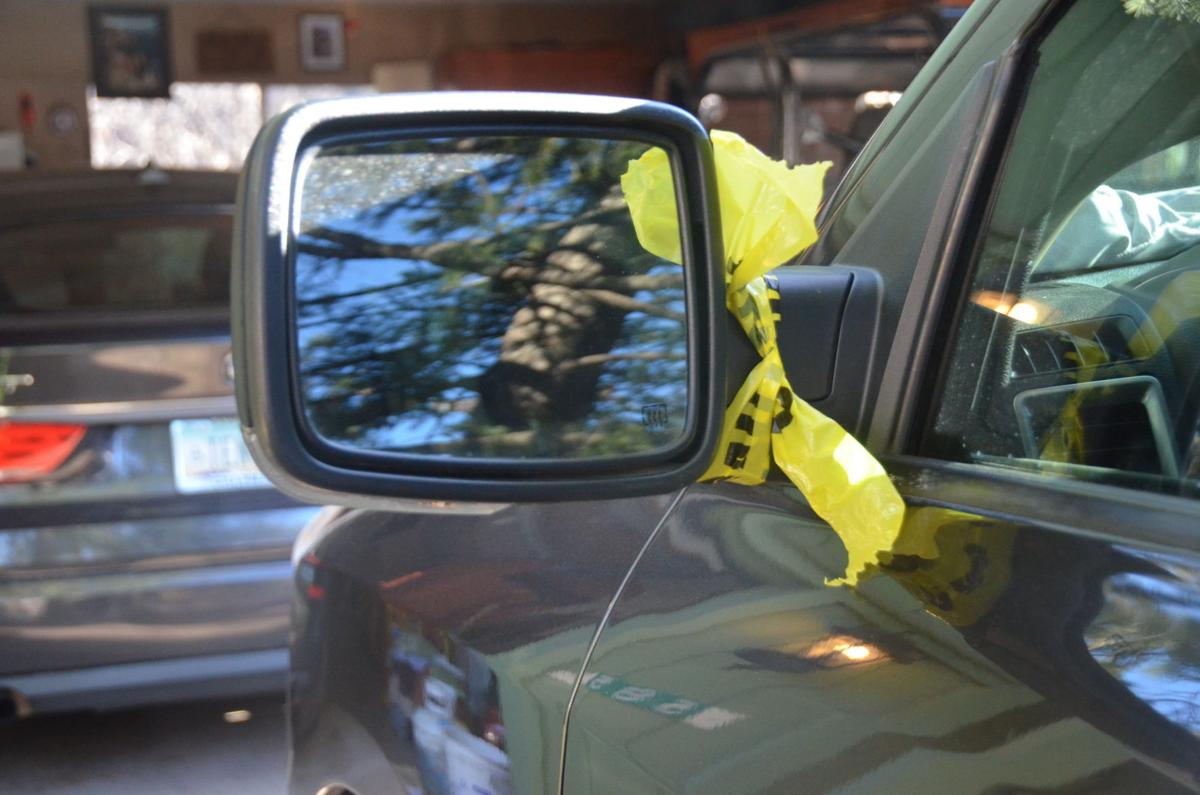 "Crime Scene" tape was tied to the rearview mirror of the Hannum truck indicating the vaccination recipient was in the high-risk category.

Larry and J.J. Hannum with their COVID-19 vaccination I.D. cards and passports as they are planning a road trip.

"Crime Scene" tape was tied to the rearview mirror of the Hannum truck indicating the vaccination recipient was in the high-risk category.

Among all the trials and tribulations that everyone has been going through during this last year, we have great reason to be proud to be Arizonans.

Our health care workers have joined with many organizations within our state to set up a preeminent COVID-19 vaccination site at the State Farm Stadium in Glendale. It has been so successful that President Biden has targeted our site as a model for other NFL stadiums across the country.

This is the story of our vaccination experience at State Farm Stadium.

On Jan. 11, the State Farm Stadium opened for vaccines for groups 1A and 1B. My husband, Larry, is 78 years old and thus qualified for the shot as he was in group 1B. He immediately got on the computer at podvaccine@azdhs.gov and signed up to get an appointment. He had no qualms about being vaccinated, as he always got the flu shot each year and was a firm believer in vaccinations. He is, however, in the high-risk category, and so I consider him to be a very brave man. I am not brave at all and was on the fence about getting the shot.

A week later, on Jan. 19, we headed from Christopher Creek down to the Cardinals’ stadium for his appointment, which was for 8:42 p.m. We followed signs, taking us into the parking lot. Also, you could tune in to radio station 1650 AM for traffic updates. We were very excited when we didn’t see very many cars, as we previously thought that the process would probably take several hours. But we were soon to find out that this testing site was a well-oiled machine. It was very organized.

After following the line, which snaked through the parking lot, we came to the first checkpoint. One of many volunteers checked to see that you had the paperwork for your appointment. By the way, this site is open 24/7 and there are over 300 volunteers running it and each one is offered the vaccination in return for one eight-hour shift. The volunteer then wrote the appointment ID on the windshield. Now it was off to the next checkpoint.

At the second checkpoint, our volunteer entered the number on our windshield into his computer and checked over Larry’s medical history, which he had filled out on the computer when he signed up. My husband is a high-risk patient, as he has had a heart valve replacement. Our volunteer noted that and sent us to the next checkpoint. Mind you, we were moving along very quickly as there were few cars in line.

At this third area, after the number on windshield was entered into yet another computer, Larry’s history was checked again and the kind gentleman put a piece of yellow crime scene tape around the rear-view mirror. This is how they identify high-risk patients. We had a chuckle about that, and you can imagine the comments that were thrown around.

Checkpoint four. This is where the magic happened: finally, the shot. I was driving and told the three nurses as we pulled up that my husband was to receive the vaccination. Great, they said as they prepared the syringe. One nurse then asked me if I wanted the vaccine. What? I thought he was joking. He told me he was not joking and said that I could get the shot if I wanted. Oh, my gosh! Needless to say, I was not prepared for this development. As I stated previously, I had not yet decided if I was going to get the vaccine. I had never had a flu shot, and although I knew these vaccinations were probably the answer to getting the COVID-19 virus under control, I was still not convinced. I told him I had not signed up. No problem, he said. I said I did not have my medical ID on me. No problem. What?

Do you believe in signs? In omens? In fate? That there are no coincidences? I do. So guess what? I agreed to have the vaccination. They handed me a consent form, and I was so nervous that I filled it out completely wrong. As I handed it back to the nurse, I mentioned that it was not filled out correctly. He looked at it and told me that as long as my name, date of birth, email address and signature were on there, that is all that mattered. Wow. Was I really going to go through with this? The best part is, as he gave me the shot, I never even felt it. That was a sign!

We later found out that if there were extra dosages of the shot for any given day, it would be offered as it was to me, to anyone in your vehicle.

On to the next station, where they filled out the COVID-19 vaccination card with your name, the date of this first shot and the type of vaccination given. They also put the date for your second shot, which for us was exactly three weeks later on Feb. 9. We were told we would be emailed with the appointment time and to be sure to bring our vaccination card.

We were then instructed to drive into one of the lanes ahead, where people were waiting for 15 minutes to make sure there were no sudden reactions from the shot. Because we had the yellow tag on our mirror, we were led into a lane which indicated a 30-minute wait for those patients who were high risk. The time we arrived into the lane was written on the windshield. There were volunteers walking around checking times to make sure everyone stayed their 15, or in our case, 30 minutes before leaving. The time to get through the entire process took about an hour, including the 30-minute wait.

We returned for our second vaccination and found that experience to be just as efficient as the first. Although I wish we could have gotten our second shot the very next day because I spent the three weeks in between shots talking myself out of getting the second one. But I am happy that I put on my big girl pants and followed through with it. My husband and I now have our COVID-19 vaccination cards in hand and are looking forward to reuniting with our grandkids.

We love to travel and so we are busy planning our first road trip in well over a year.

A final thought — If you are on the fence, my suggestion is: Don’t think twice, it’s all right.