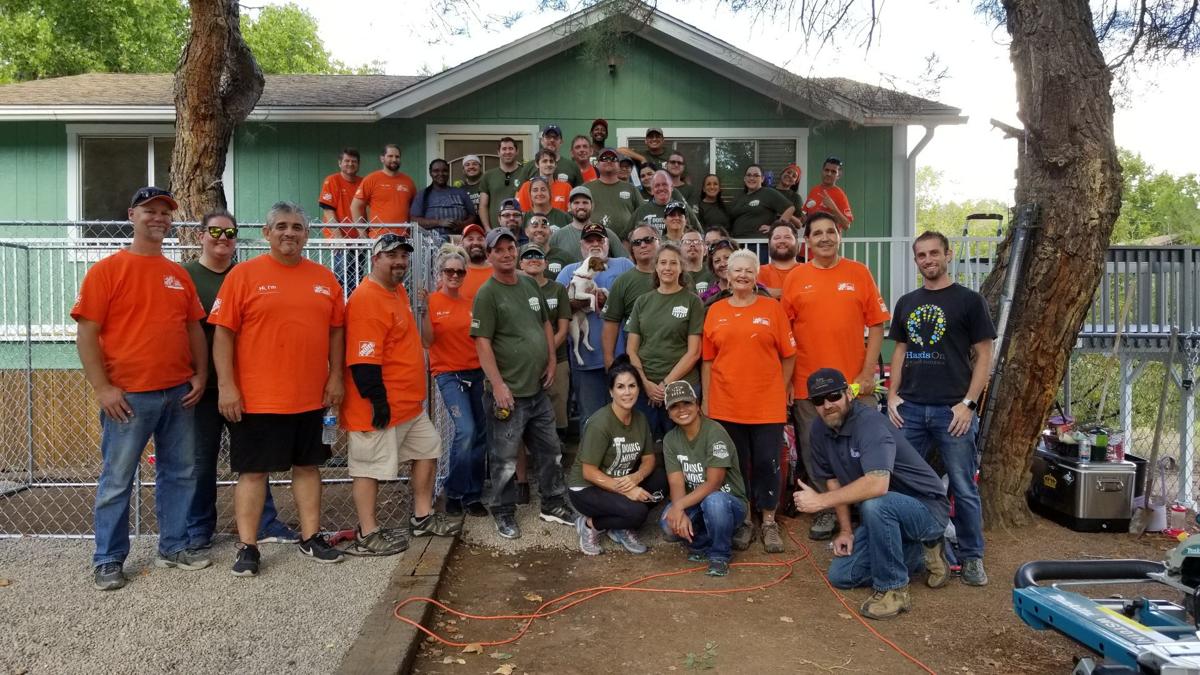 Home Depot volunteers from Payson, Show Low and Valley stores came together to fix and remodel the Star Valley home of a disabled veteran. 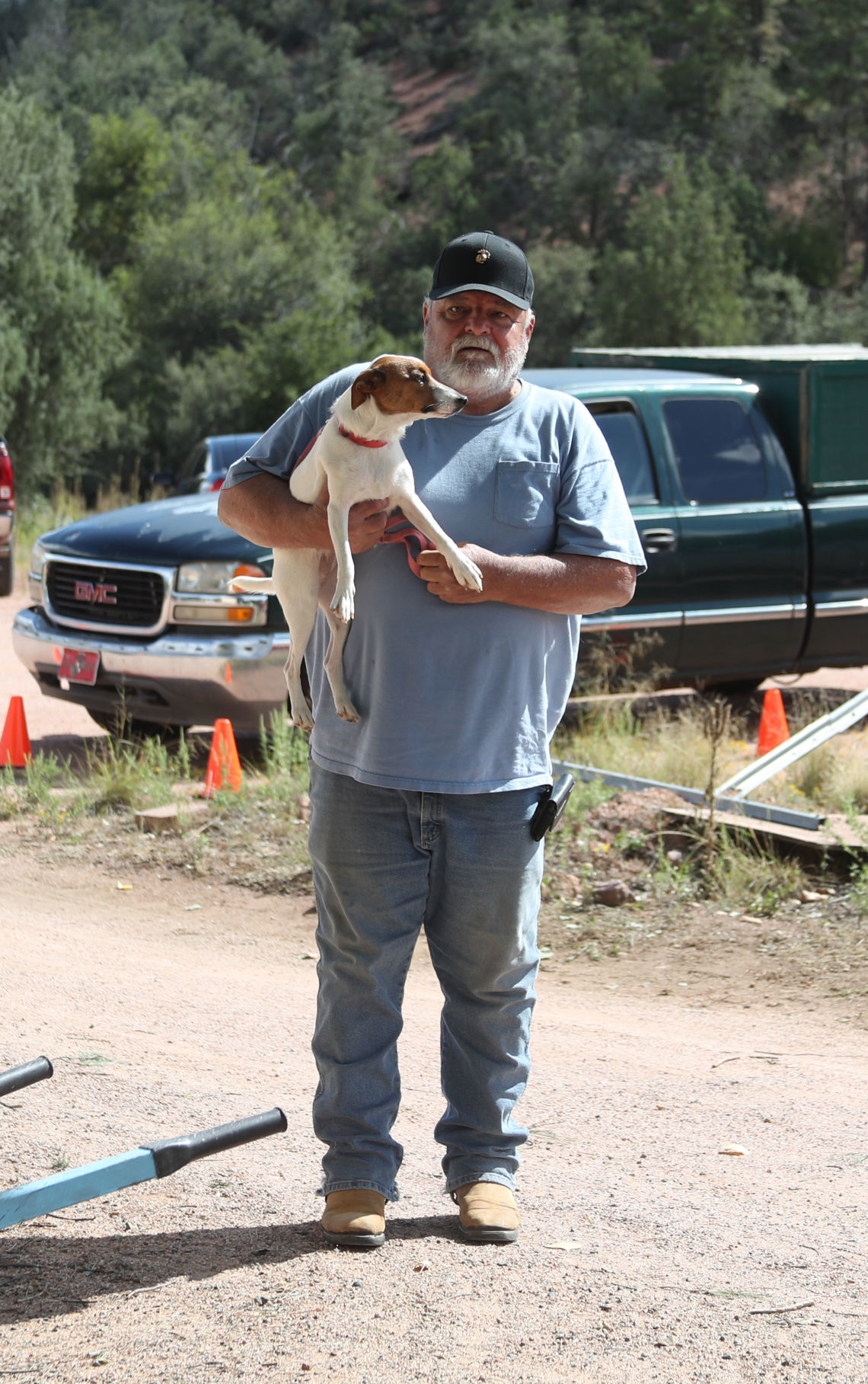 Jerry Gordon of Star Valley with his dog, Gracie. 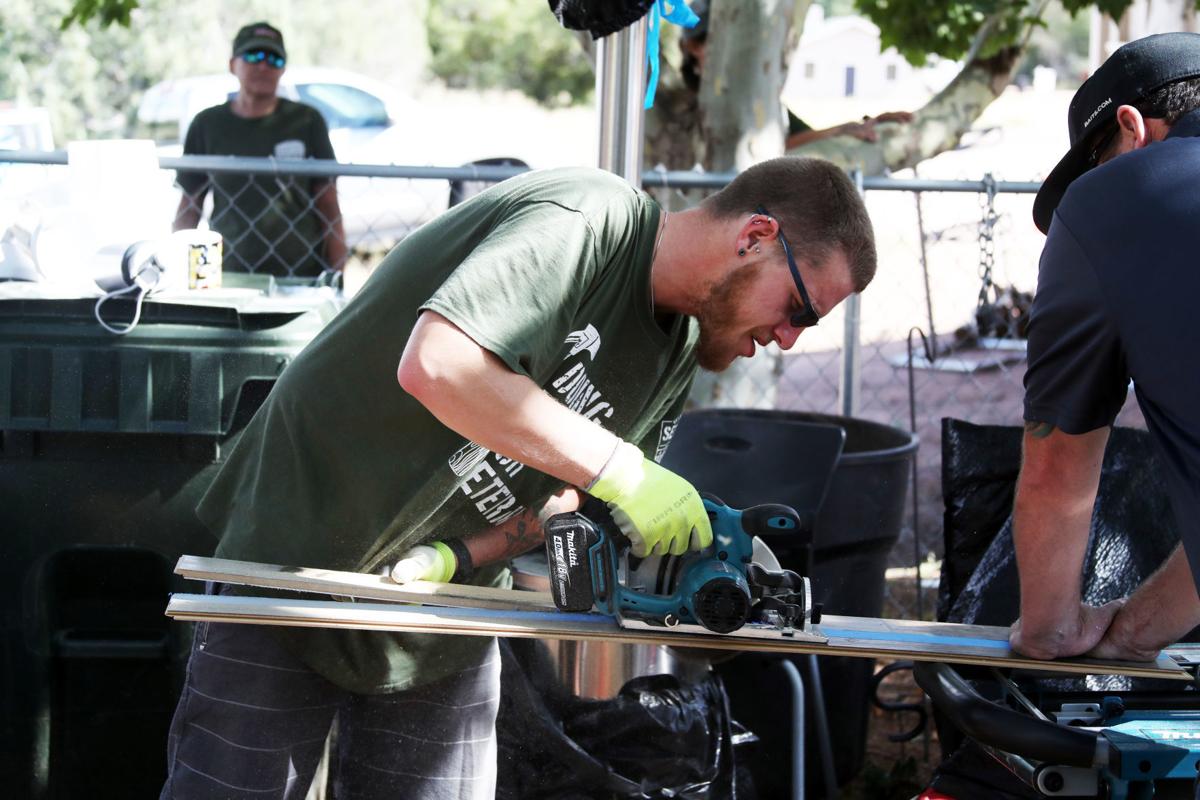 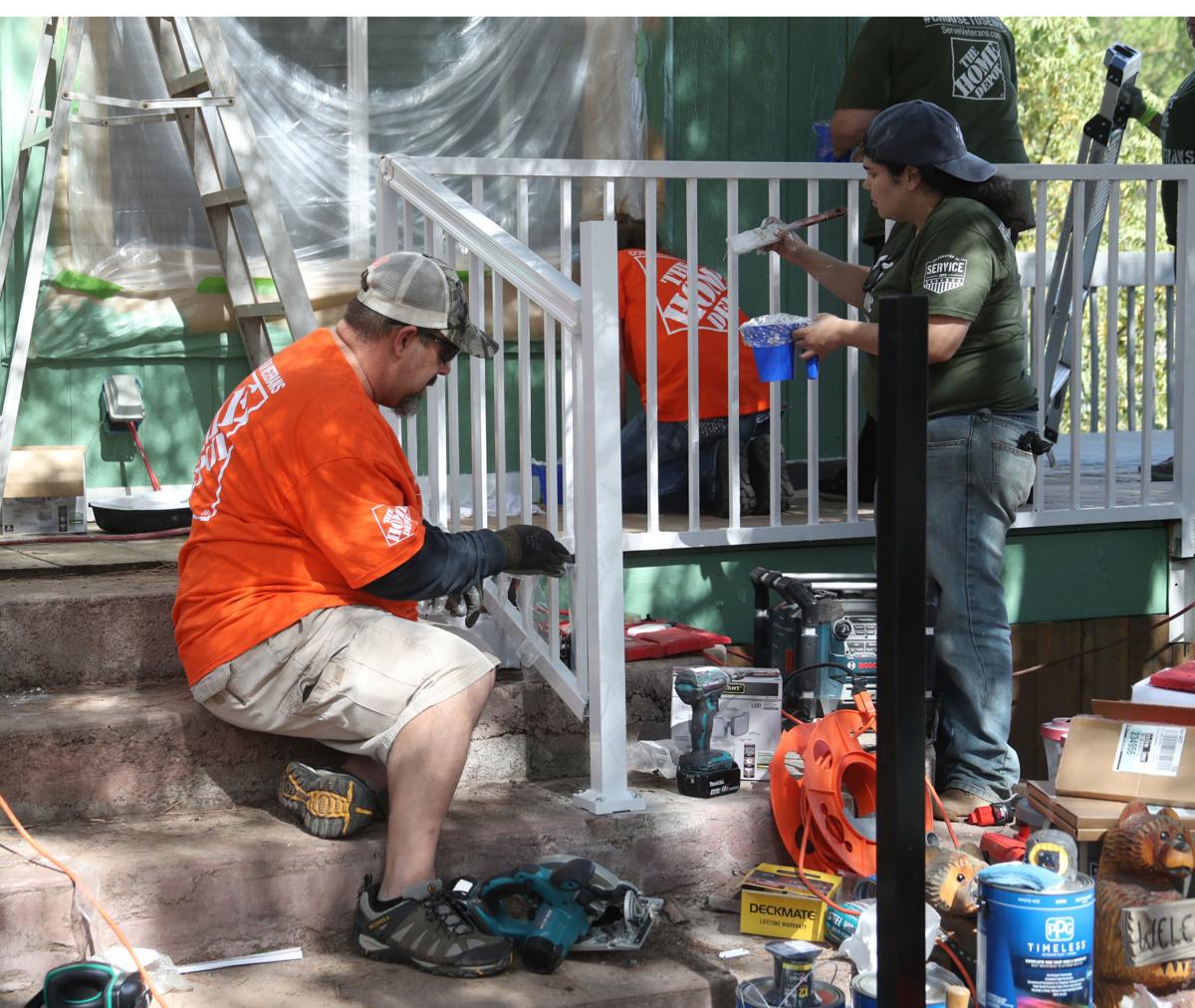 Home Depot volunteers from Payson, Show Low and Valley stores came together to fix and remodel the Star Valley home of a disabled veteran.

Jerry Gordon of Star Valley with his dog, Gracie.

Jerry Gordon gazed at the place where his home once stood.

And he couldn’t be happier.

A fire didn’t destroy his house in Star Valley. And it wasn’t a tornado, although the many volunteers who showed up on Sept. 26 made his head spin with the amount of work they managed to do in one day to transform his fixer upper into a finished home.

Between 55 to 75 Home Depot employees volunteered to transform Gordon’s house as part of The Home Depot Foundation’s Eighth Annual Celebration of Service season. From Sept. 20-Nov. 11 Home Depot associates throughout the country team up to help military veterans take care of home repairs and remodel projects.

The volunteers came from 10 different Home Depot stores in District 328, which stretches from Payson and Show Low to Tempe, Chandler, Laveen and other areas in the Valley.

Gordon is a disabled U.S. Marine veteran. He served in the Marines from 1971-74 and suffered injuries that have gotten worse over the decades. He suffers from back and shoulder pain and has undergone two knee replacements.

“My back’s all screwed up and I’ve had two knee replacements and my shoulder (bothers me). So there’s a lot of stuff I can’t do no more.”

He said his house wasn’t falling down, but needed work.

“It was livable and I had no trouble living there, but it was a fixer upper,” he said. “They’ve done an outstanding job. It’s gonna be a whole lot different.”

He loves the new exterior color of the house.

“It was a faded white and they’re putting this beautiful green paint on it,” he said. “It’s gonna look a whole lot different.

Gordon said other veterans need this kind of help more than he does.

“I’m still trying to fathom receiving all this because there’s so many disabled veterans out there that are in a whole lot worse shape than I am,” he said.

He put his name and phone number on the sign up sheet at the American Legion and was surprised when he received a phone call informing him it was his lucky day.

“They asked for any veterans wanting work done on their house,” Gordon said. “I didn’t even think nothing about it then about six months later I get a call.”

He was overwhelmed by the scope of the project.

“They told me just make your Christmas wish list and we’ll take care of it,” he said.

“Hey, this is great. Some of these people drove all the way from the Valley to come up here and volunteer. I’m kind of at a loss for words.”

It’s not easy for him to sit and watch so many people working together for his benefit.

“I’ve always been a giver, not a taker,” he said. “I have a hard time watching all these people come in here and help me out. But they’re great. I tell you what, you ain’t ever gonna find a better bunch of people than these Home Depot volunteers.”

The volunteers showed up at 8 a.m. and spent the entire day painting the entire house, repairing and painting decking, remodeled the bathroom, replaced rotted flooring in the kitchen, put a dog run in for Gordon’s dog, Gracie, cleaned up around the house, installed ceiling fans and new electrical fixtures and hung new doors.

“It’s just pay back for what he’s already done for our country,” Minkner said.

Many of the Home Depot volunteers will take part in more of these projects. Another is planned to help a veteran in Tonto Basin in early November.

The Celebration of Service goes through Veterans Day.

“Every district will be picking two or three different projects they can do and they can rally up to 10 stores together to have volunteers come out to do that,” Minkner said.

Originally from Iowa, Gordon spent 30 years in the Valley before moving into his house in Star Valley four years ago.

“This is one of the things that the Home Depot does, not only for our veterans, but we get the community involved and help the veterans that aren’t able to help themselves,” he said. “We’re trying to get to half a billion dollars by 2025 as a corporation the Home Depot Funding and helping this out.”

“Home Depot cares about us and our families and about our values, so we associates can turn around and help The Home Depot help our veterans.”

Cook said the smiles he sees on the faces of the veterans is enough to keep him signing up for these projects again and again.

“They have a smile on their face, or even sometimes shed tears in certain circumstances after watching us completely transform their house by doing things they unfortunately aren’t able to do,” Cook said. “It’s a chance of a lifetime thing. So the best thing for me is seeing the smile on their face seeing that we care about them for what they’ve done for our country.”

Scott Steuart is the manager for Home Depot Store 49 in Tempe. He’s the District 326 captain.

“In 2008, we started the foundation to award the majority of dollars to active retired military,” Steuart said. “By 2020 the company will have dedicated over half a billion dollars to nothing but projects like this to be in communities, to help out active and retired military, whether it’s a personal residence or a VFW or anything of that nature, this is where Home Depot has chosen to do their donation dollars is through the military fund.”

He said this aspect is one of the things he’s most proud of about working for Home Depot.

“It’s one of the coolest parts of our jobs,” Steuart said. “Every single person out here has volunteered. We have sign-up sheets at every store. If you have a special trade like electrical, plumbing, that’s fantastic, but anybody can pick up a broom, anybody can grab a paintbrush, so you’re definitely an asset to come out and help anytime. That goes for associates, but we get plenty of people from the community that come out as well to do different projects.”

He said he may go home tired after a day volunteering for the project, but he’s gratified.

“It’s so rewarding,” Steuart said. “You know, you go home and your bones are tired, but your heart’s full. You know you helped out.”

“Once you go to one, you’re hooked,” Steuart said.

“As soon as you sign up for one, you’re going to go to every single one. It’s the camaraderie we have out here.”

The Home Depot Foundation partners with the nonprofit Hands On Greater Phoenix, which recommends veterans for them to help.

“We have great partners like Hands On Greater Phoenix that helps us with providing tools, helping us work with Wounded Warriors to help find veterans to work with and it’s hands down the most rewarding part of our jobs,” Steuart said.

Gordon couldn’t be happier that he wrote his name on that sign-up sheet at the American Legion.

“It’s going to be like moving into a new house,” he said before the project ended.