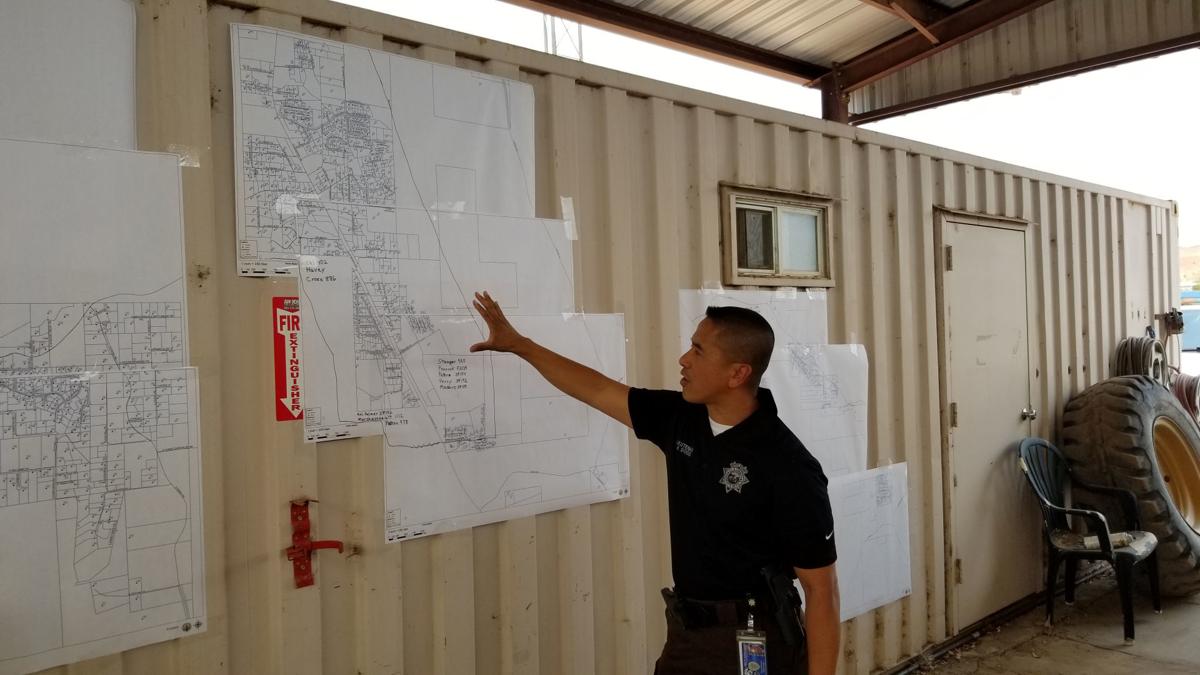 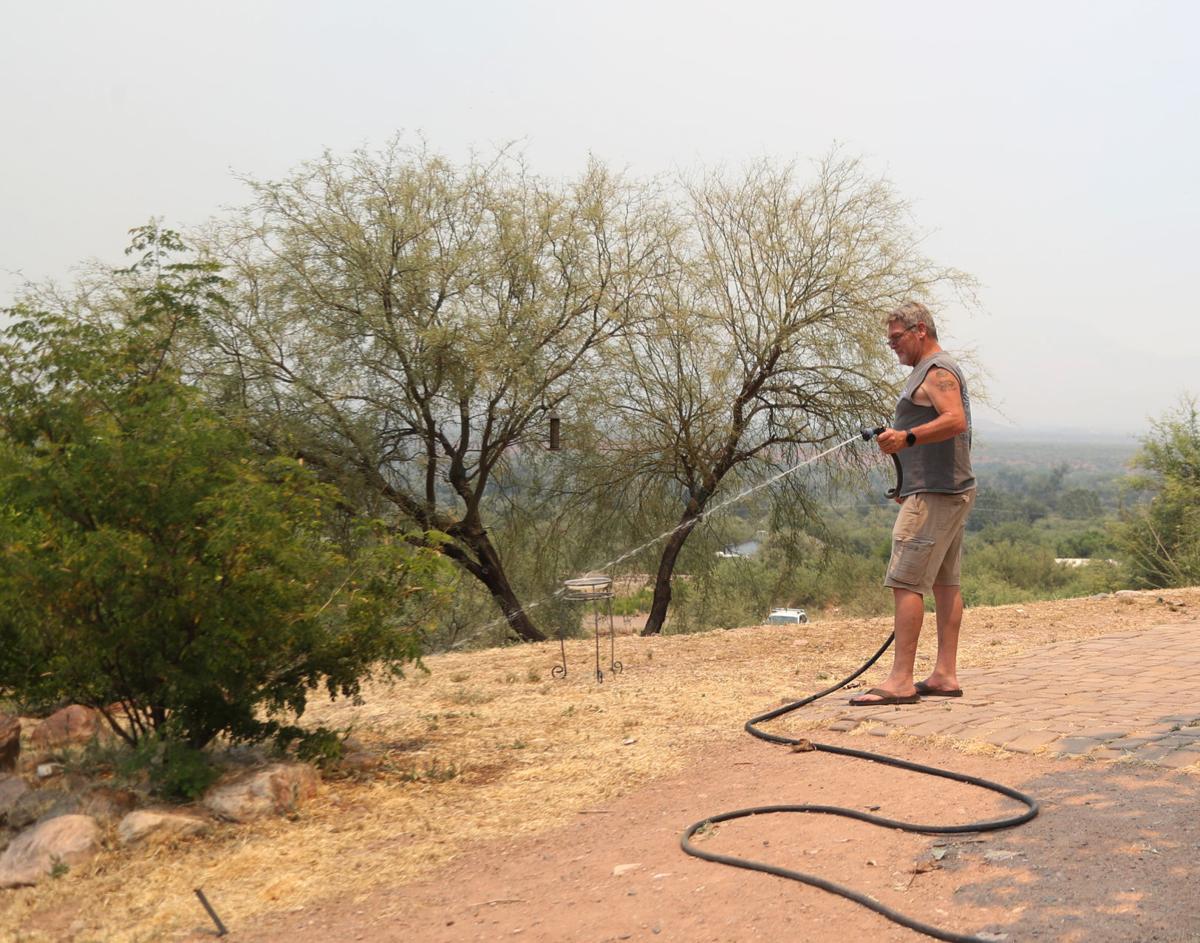 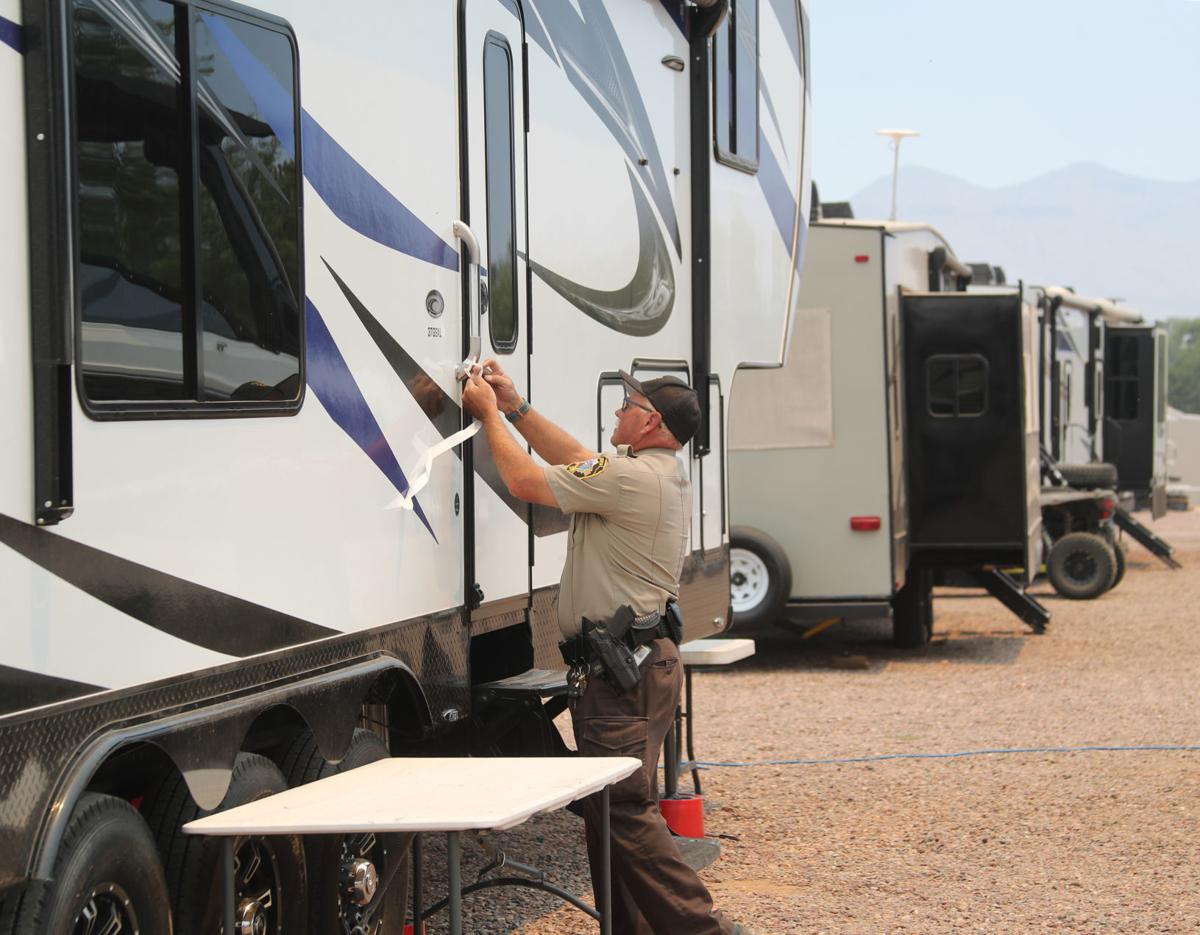 Residents fill their fuel tanks at the Tonto Basin IGA as they head out of town under evacuation because of the Bush Fire on Monday, June 15.

Smoke from the Bush Fire fills the sky near Tonto Basin on Monday. 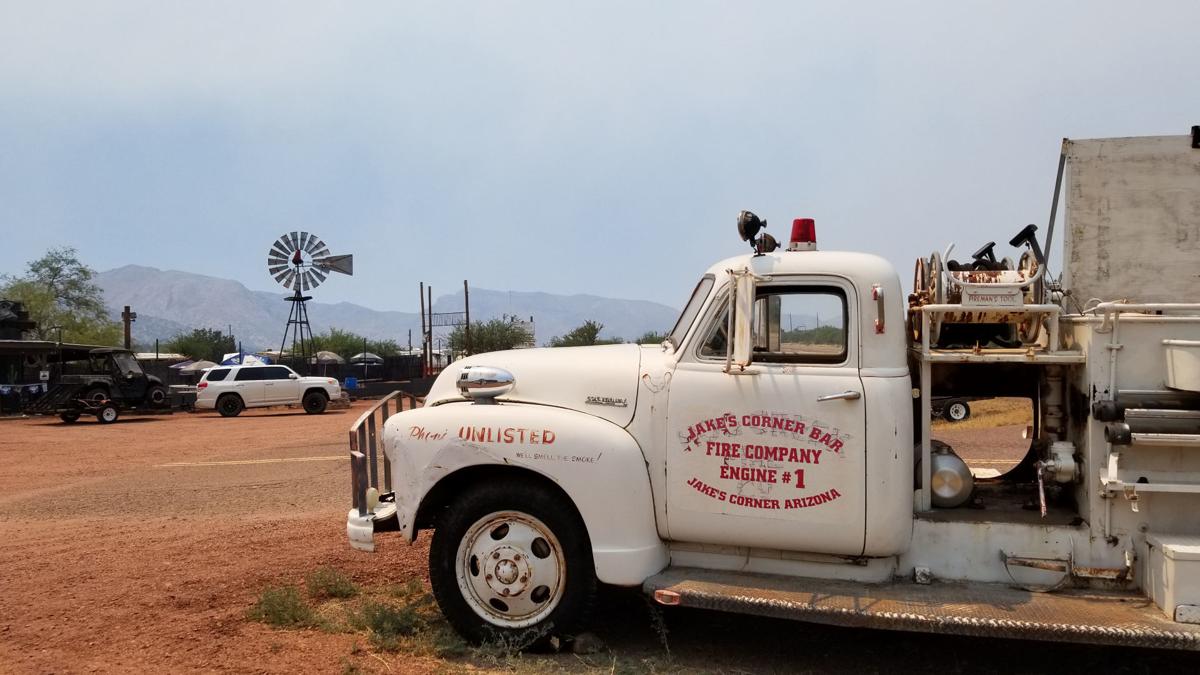 Smoke fills the air in the distance at Jake's Corner on Monday.

Residents fill their fuel tanks at the Tonto Basin IGA as they head out of town under evacuation because of the Bush Fire on Monday, June 15.

Smoke from the Bush Fire fills the sky near Tonto Basin on Monday.

Smoke fills the air in the distance at Jake's Corner on Monday.

Thick white smoke hung in the sky over Carl Hacker’s shoulder as he turned on the water hose and began spraying bushes in front of his Tonto Basin property.

Several feet away, his recreational vehicle sat waiting in the driveway, packed and ready to go as ashes floated down intermittently.

“I’ve never seen it like this, not this close, not this bad,” he said.

As the Bush Fire crept closer on Monday, the nine-year Tonto Basin resident was one of the last remaining in his neighborhood following evacuation recommendations earlier in the day.

His dogs, Rex and Rosie, came outside briefly but quickly lined up back at the front door to escape the smoke and the mid-90s temperatures. The air conditioning in the house works better than in the RV, said the “semi-retired” contractor.

Hacker planned to head north with his dogs to visit friends in Payson and monitor the situation. He lived in Payson for 20 years before moving to Tonto Basin. He’s a maintenance worker and backup bus driver for Tonto Basin School.

“It’s hard to leave your house,” he said. “But I just talked to the (Gila County) sheriff, and he said we’re in imminent danger. I don’t know why I’m watering these (plants). I probably should water my house.”

He hopes he’s got a house on his acre of property to return to. And plants to water.

Since Saturday, when the human-caused fire started on the east side of State Route 87 in the Sugarloaf Recreation Area it has grown to nearly 115,000 acres, making it the largest active wildfire in the U.S. With winds pushing it north at a rapid rate, county officials had Tonto Basin and Punkin Center evacuated followed by Sunflower on Tuesday. Jakes Corner is on a pre-evacuation notice.

“I don’t know what I’m going to come back to,” he said. “I’m just kind of hanging out and protecting my investment.”

Gila County Sheriff’s Office Lt. Virgil Dodd was among those working in the evacuation area on Monday.

“Our No. 1 goal today is to protect lives of both people and animals and property,” he said. “We want to give them enough time to prepare to evacuate the area.

“It’s not mandatory to leave (now). They have to sign a waiver if they’re not going to leave. We follow the ‘Ready, Set, Go!’ protocol and right now we’re in the Go protocol. We just want to make sure people get out of here safely and give law enforcement and firefighting personnel (the ability) to come out here and do their job.”

Gila County Sheriff’s deputies were going door-to-door informing residents of the danger and the evacuation recommendation.

Gila County Sheriff’s Office Reserve Posse Commander Guy Peterson and Lt. Denny Mason knocked on doors in the Lazy Ranch RV Park in Tonto Basin to see if anyone was home at each of the trailers parked there. They’d place white tape on the door if it was vacant and blue if it was occupied. They’d place white and blue if the resident told them they were planning to leave.

Peterson had just placed a white strip of tape on the door handle of one trailer when Michael Ploof drove up and backed his truck up in front of a boat in front of the trailer and went inside. Peterson talked to him and added a blue strip of tape to the door.

Ploof lives on the east side of Tonto Creek near Punkin Center, just north of Tonto Basin. He and his family get trapped a couple of times a year when the creek rises.

But he said this fire represents a new concern.

“This is really scary,” he said. “I mean, this is our little paradise. So, just thinking that it could all be gone is just terrifying.”

Most of his friends had already left. Ploof said his family was ready to leave at a moment’s notice, but planned to stay for now.

“We have all of our stuff packed, so if it does come down to it, to where we have to get out, all I have to do is hook my truck to our toy hauler and we’re out of here,” he said.

Ploof was at the Lazy Ranch RV Park to do what he could for some of his friends from the Valley and Tucson, who were unable to get to the area. He planned to move a friend’s trailer and boat farther away from the fire, as well as another friend’s boat.

“There’s a big group of friends of ours who rent spaces up here,” he said. “Todd and Debbie Eden are from the Valley and I’m trying to get their boat and trailer out of the path of the fire, then hopefully (my friend) Dana’s (Cron) boat, too.”

But he said he was only doing it because time permitted it on Monday.

“All these machines and stuff can be replaced, we’re just trying to get them in a safe spot so we don’t have to deal with that,” he said. “Hopefully everyone’s going to be safe and get themselves out of harm’s way, as opposed to worrying about machines and things like that.”

But some didn’t go far.

That makes it easier to be there for her neighbors in their time of need.

The fire on top of the COVID-19 virus is like a double-whammy to Aragon, who bought the bar in March of 2019. But that isn’t stopping Aragon and boyfriend Matt Roberson from handing out all the food they can to first responders free of charge whenever they need it.