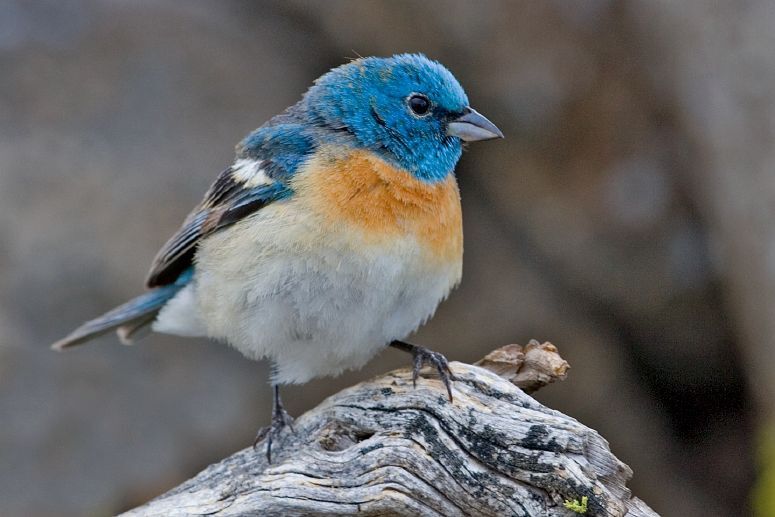 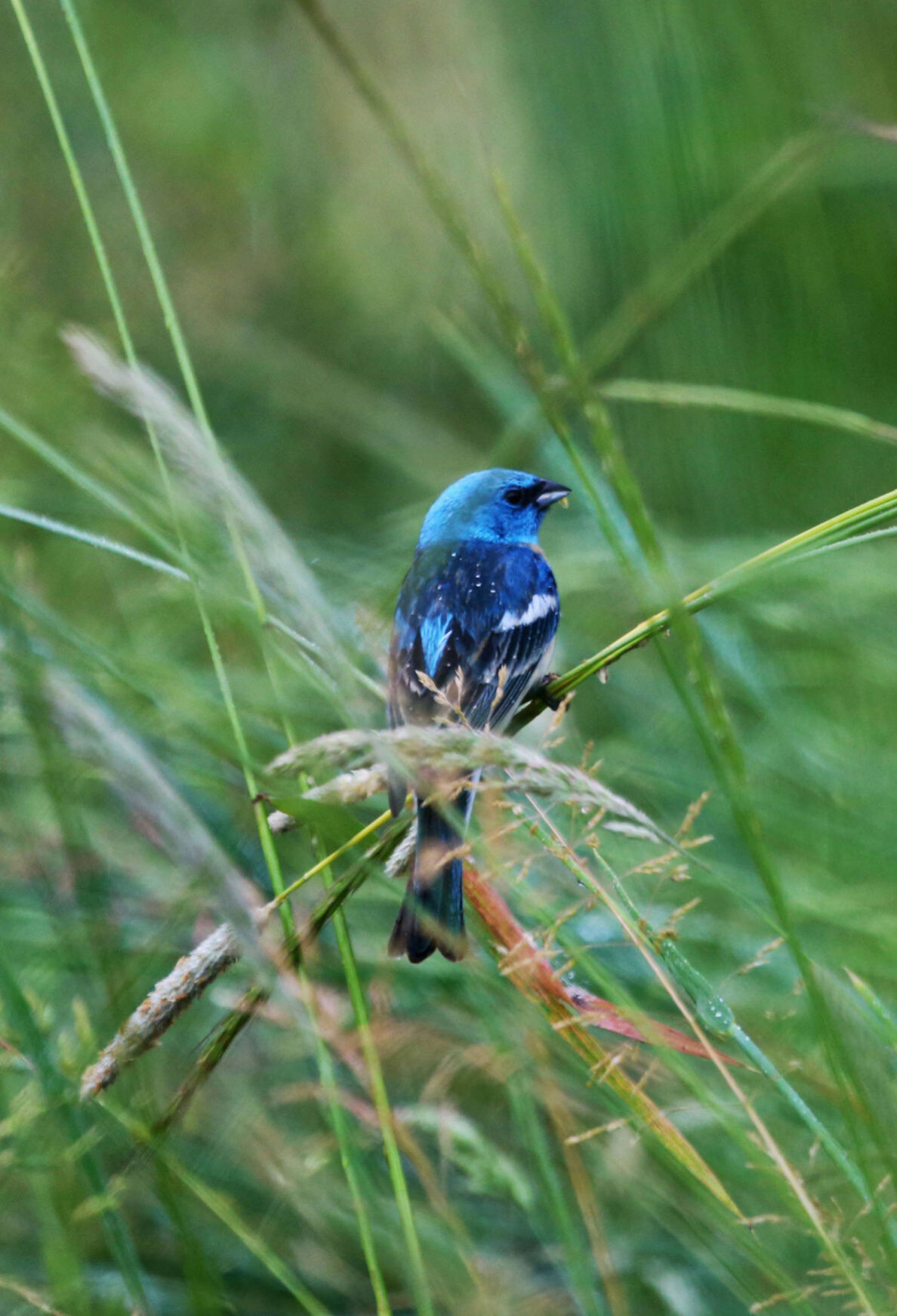 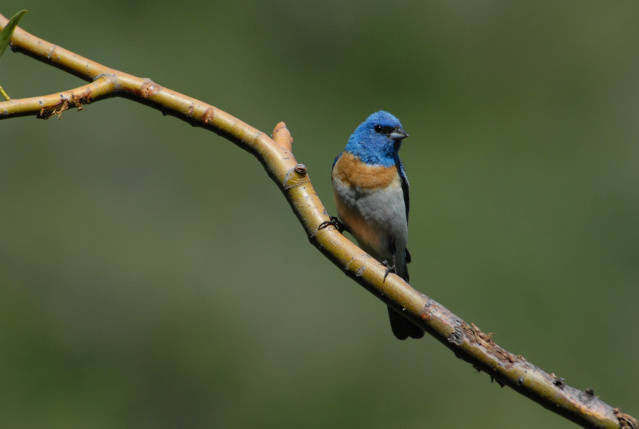 The lazuli buntings give me hope.

Not just because of their epic journey to happen upon my bird feeder.

Not just because they’re the color of gemstones and the brightest blue sky.

Not just because they remind me of my father.

No. Lazuli buntings give me hope because they prove that even geeks can get the girl if they keep their wits about them — and their ego in check.

I know, that’s a lot of hope to extract from a bright blue and rusty orange, sparrow-sized bird that weighs about the same as three quarters in a stack. But three or four lazuli buntings have turned my bird feeder into a migratory rest area and I can’t get enough of them.

The lazuli buntings winter along the coast of Mexico and down into the tropics. Come spring, they cover as much as 4,000 miles to reach breeding grounds in northwestern U.S. and Canada.

Their scientific name means “beautiful sparrow,” for their heart-stopping blue, orange and white coloring as they flit through the foliage. They were a treat for me this year, in the midst of the drought and the grim news about bird migrations.

I have not seen them before at my feeder, although I remember them vividly from my birding trip to southeast Arizona 20 years ago with my father. We had both all our lives defined ourselves by our work. So we never made much time for one another, hacking our way through the thickets of our respective careers. But after he retired and on the brink of the cancer that would end his long, brave story, he asked me to go on a birding trip in the depths of December near Sonoita. In a thicket near a little spring, we found both a lazuli bunting and an indigo bunting. My father’s transparent joy in the sighting astonished me. In that moment, I understood that I had misunderstood him for my entire life. I shall forever love buntings for revealing him to me at the end, with just enough time left to finally see him clearly.

But I have not seen the lazuli here on the East Verde River, dried now to a trickle by a drought the likes of which likely brought 1,000-year-old civilizations to their knees here in the 1300s.

The migration has been tough on the buntings and their legions of friends in recent years. One study suggested that some 3 billion birds have gone missing in North America in the past few decades. Birds have so far survived us by taking wing — harvesting the bounty of spring and summer and fleeing the rigors of winter. Flying thousands of miles twice year has always taken a toll, but the tradeoffs nurtured great flocks of birds that once darkened the skies.

Some migrating birds fly hundreds of miles a day, most appear to fly from one sanctuary to the next, spending 10 days fueling up at a place like the East Verde for each three days they spend on the wing. They can sense the Earth’s magnetic field and navigate by the stars at night. They routinely perform metabolic feats of endurance that would kill a human being, with our heavy bones and our inefficient lungs.

But we’ve bulldozed and dewatered their refuges. The leafy highways of riparian areas in Arizona are flyways for migrants, but we’ve drastically altered or destroyed 90% of those riparian areas.

Moreover, the brilliant night lighting of our cities has proven another hazard, according to research — overwhelming the faint light of the stars and disorienting the migrating birds. One study in Chicago counted 40,000 dead birds that flew into the lighted windows of a single skyscraper at night. Another study estimated that lights beamed into the sky for a week as a memorial to the victims of 911 prompted roughly 1 million migrating birds to circle aimlessly over New York, according to radar images.

Worse yet, the weather has grown even more unreliable — with spring hitting harder and faster. Last year in the migration, wildfires, weird storm systems and other poorly understood factors led to mass deaths among migrating birds in Arizona and New Mexico.

This alone would make me yearn toward those lazuli buntings.

Buntings also prove that geeks and Jeep owners can get the girl, if they’re humble and persistent.

Male buntings defend prime mating territories, then preen and strut and sing to attract females. Every male comes up with his own, unique song, based on fragments and snatches of other songs he’s heard.

But in truth, the females are shallow. They’re suckers for bright blue. The brilliant blue of the males remains the equivalent of a guy jangling his Ferrari keys in the bar at closing time.

Alas, male buntings come in many shades — bright blue, “intermediate,” and just plain drab. So some researchers from the University of California, Riverside writing in the journal Nature wondered whether the flashy, bright blue males did better in the sack, or the nest, or whatever.

So they undertook one of those arduous studies that make me love hopelessly curious human beings. They used cameras, hundreds of hours in the field, mist nets and DNA analysis to examine the link between color and breeding success among a passel of buntings in Montana.

But then came a surprise. The drab males did better than the “intermediate-colored” males.

Turns out, the swaggering, bright blue males will chase away the “intermediate” males. But they tolerate the drab-looking males. Maybe they feel the drab males just make them look extra sexy.

As a result, the drab males benefit from all of the females lining up at the bar trying to catch the eye of the bright blue males. Come closing time, one lucky female gets the guy with the Ferrari keys, but others must settle for the drably amiable loser down at the end of the bar.

Of course, the drab males did have to overlook the occasional infidelity — waking up to the sound of the Ferrari drag racing down the block. But hey, everything costs something.

I must admit — I find this research obscurely comforting. I’m a geek. I drive a Jeep. My wife’s way out of my league. But it turns out that good things sometimes really do come to the humble and patient.

So I shall pour my coffee and go sit on the deck and learn all I can from my lazuli buntings.