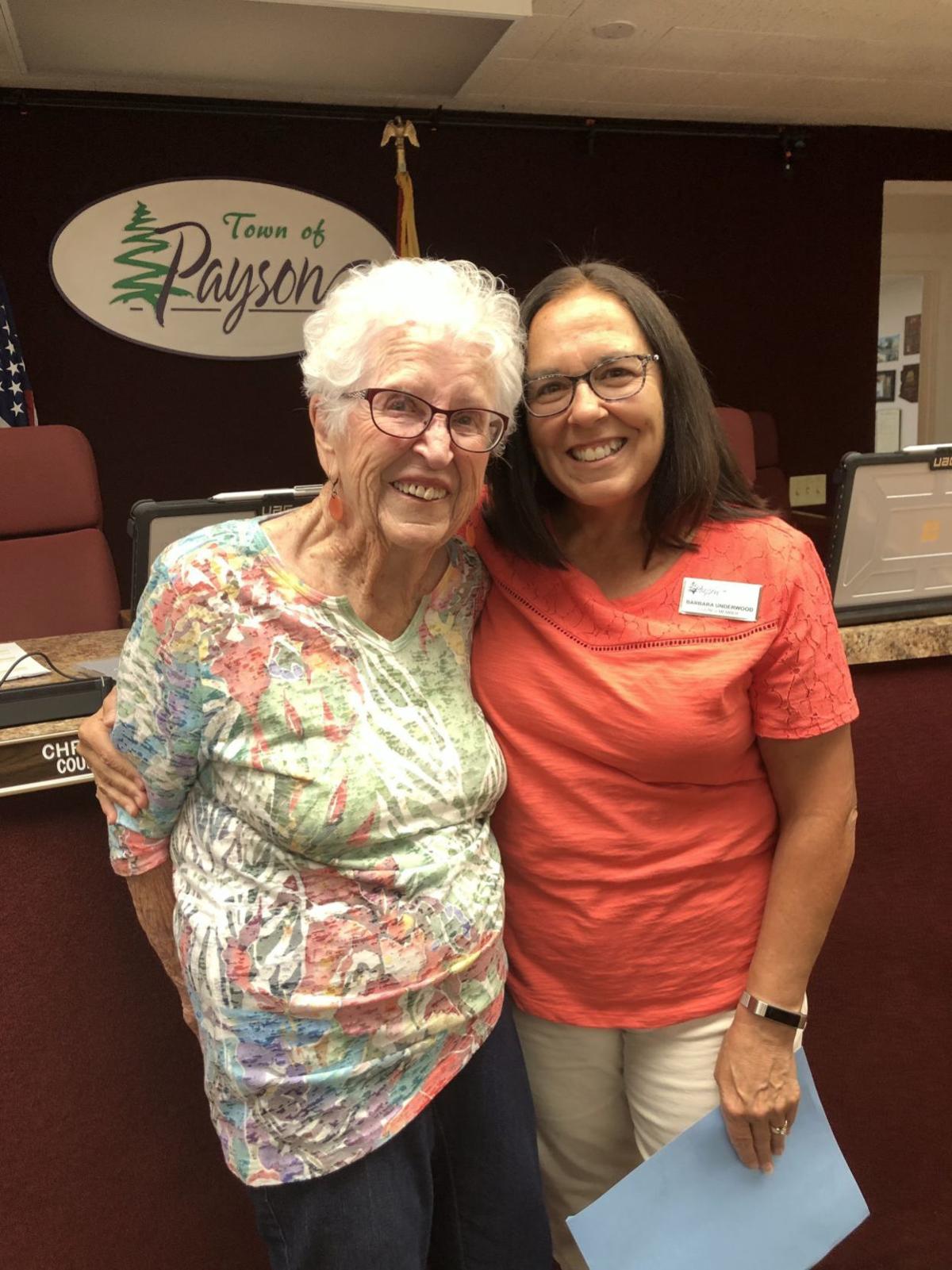 Wanda Ruth Yocum and Barbara Underwood share a birthday on June 30. This year to celebrate Yocum’s 100th birthday, Underwood launched a proclamation to celebrate all centurions in Payson. 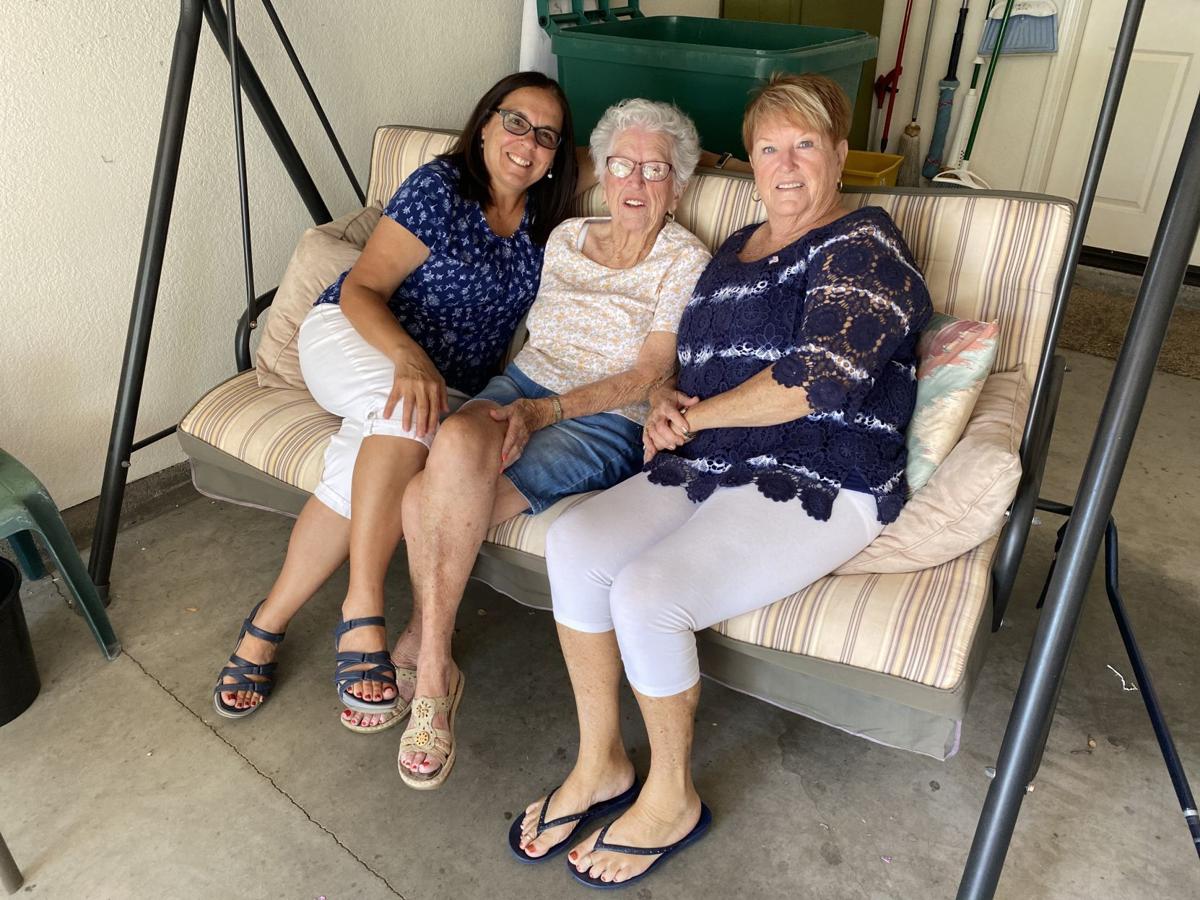 Wanda Ruth Yocum and Barbara Underwood share a birthday on June 30. This year to celebrate Yocum’s 100th birthday, Underwood launched a proclamation to celebrate all centurions in Payson.

Wanda Ruth Yocum has turned her Payson garage into her front porch, where she can chat with the neighbors, watch the world amble past and sort through a century of memories.

She turned 100 on the last day of June, which earned a proclamation from the Town of Payson.

But on this day before her birthday, it was just another day in the swing, relishing the love of her daughter, the gossip with the neighbors and shaking her head at all the people on cellphones while remembering dear friends and lost loves.

She was born in the shadow of the 1918 flu pandemic, which infected a third of the world’s population and killed an estimated 50 million. Now, she shudders in the face of another pandemic — which makes people afraid to sit alongside her on the chairs reserved for guests.

In between, she recalls the Great Depression, the day the government sent her dear friend to an internment camp, a terrible world war, the thrilling moment the first human walked on the moon, the assassination of a president, the crowds of kids who showed up for dinner, the beloved husband who whistled the first time he laid eyes on her — a life of love and loss and triumph and struggle.

But mostly now she likes to sit and chat — and wave off her daughter’s worries that she shouldn’t be living alone, climbing atop step stools.

She’s still the heart of the neighborhood, relaxing on the piles of cushions on her porch swing, set up in the garage with its open door so she doesn’t miss a thing.

“She has a patio in the back, but she prefers to be here,” said Wanda’s daughter Linda Idoine, sitting in one chair Yocum keeps on hand for visitors — including passing neighbors and visiting reporters.

As the wind blew into the garage, Yocum shook her head.

She misses the freedom to wander the town she’s called home for 22 years. But those garage porch seats don’t remain empty for long. Her daughter or granddaughter or the cleaning lady happily sit, gossip and prod Yocum for a story.

She has lots of those during this birthday week. The momentous occasion inspired the Town of Payson to present her with a proclamation — and to announce it would do so for other Payson centurions into the future.

Council member Barbara Underwood hopes the town will continue to honor all Payson residents who celebrate a 100th birthday.

“Wanda is my role model. I’m going to live to be 100,” said Underwood, who shares her birthday with Yocum.

For 20 years, Underwood and Yocum have celebrated their birthdays together with lunch or small gatherings, but this year Underwood presented her with the proclamation.

“She’s quite a gal,” Yocum said of Underwood.

Yocum can tick off many of the 20th century milestones.

She remembers the Great Depression.

Her dad lost all the family’s money in the banking collapse.

“We never did get the money back,” she said.

She met her husband shortly before WWII broke out.

“You were visiting your brother and sister-in-law in central California,” said Idoine. “He was there working at a Chevron, right?”

Watching her walk down the street, her future husband whistled, turned to his friend and declared, “I’m going to marry that gal,” said Yocum.

“I didn’t know him very long,” she said dropping her eyes, “It was six months.”

Might have been a short time to get married, but the marriage lasted until 1997 when her husband passed away and she moved to Rim Country to be with family.

While in California when the ’60s rolled around, Yocum found a career in education.

“I was in the high school office,” she said. “We were lucky enough to get a television.”

She served as attendance secretary, even for her daughter.

“We couldn’t get away with much,” said Idoine.

Yocum remembers the first man on the moon.

“It was amazing,” she said.

And when President John F. Kennedy was assassinated, “first thing we knew, we had nobody in the office” as everyone rushed to turn on the television to get the news.

Now, she gets impatient at how many people stay glued to their cellphones.

“I prefer conversation,” she said.

Yocum credits her joy and long life to her relationship with family and friends.

One of the more poignant started in a Huntington Beach elementary school in the 1920s.

Yocum’s parents had moved there chasing the oil boom. Prior to that, Yocum’s father worked in the coalmines of Illinois.

In elementary school, Yocum met Yuki, of Japanese descent. Yuki will turn 100 in a couple of months.

So Yuki, who knew her friend’s locker combination, often tucked a little basket of strawberries into the locker as a gift.

Then came Pearl Harbor on Dec. 7, 1941 and the internment camps, where the U.S. held 120,000 people for three years — many of them American citizens. Yocum wept as she watched her friend climb onto the bus for the trip to the Santa Anita racetrack, which the government converted into a makeshift prison. Yuki’s family ended up living in a hastily converted horse stall.

“They had on lettermen’s sweaters and carried their Oiler jackets as they climbed on that bus — we were all Huntington Beach Oilers ... I cried,” said Yocum.

“He spent a year in Guam,” said Yocum.

The two friends lost contact for the next 40 years.

She didn’t find Yuki again until her son sent out a digital search for anyone with Yuki’s last name.

“My parents were visiting us in the ’80s,” said Idoine. “By the time they got home, they had on their telephone a message from Yuki’s brother.”

The childhood friends reconnected and visited up until last year, when Yuki moved into an assisted living center in California.

Yocum’s children adore her and finish her stories, but she insists on living alone — cooking and cleaning and maintaining her independence with a sweet smile.

Idoine frets. “She is doing things she should not be doing,” she said, like climbing atop a step stool to reach the high cupboards.

Yocum just smiles, looking not a day over 80.

How does she do it?

Love and neighbors, friends and family and that connection to the community.

“My home was always open to friends,” said Idoine. “At dinnertime my mom would say, ‘I don’t know how many we’re having for dinner.’ She didn’t care who was there.”

Life also showed Yocum hard work and independence keeps a person spry, something she lived out while visiting her husband’s family farm.

The mother and daughter fondly remembered the yearly family trips to Missouri.

Idoine’s grandfather tried to teach her how to milk a cow, but “I wouldn’t get near a cow,” she said.

The farm had a garden with fresh vegetables. Milk from the dairy cows made homemade ice cream. But it wasn’t all bucolic.

“They had outdoor bathrooms (i.e., outhouses) and a water well right by the back door,” said Idoine.

The experience toughened both the California residents up.

Another piece of advice Yocum believes keeps her young, “Live. You can’t go back. Enjoy your memories,” she said.

Which reminded Idoine of a story from her high school days. Her mom wasn’t easy on her, but Idoine doesn’t hold it against her mother that her last day as a senior in high school was stressful.

Idoine and her friends had ditched school for a day at Newport Beach.

She had to confess in advance, since her mom was the attendance secretary.

“She said, ‘If you get in trouble, it is your business,’” said Idoine. “You know we didn’t have a good time — they had truant officers at the beach.”

But Idoine respected her mother had limits.

Now that story is just another chapter in a rich history shared with her mother that a town proclamation or not, makes Yocum’s 100th birthday special for all those who call Payson home.

“My home was always open to friends. At dinnertime my mom would say, ‘I don’t know how many we’re having for dinner.’ She didn’t care who was there.” Linda Idoine

“Wanda is my role model, I’m going to live to be 100.” Barbara Underwood