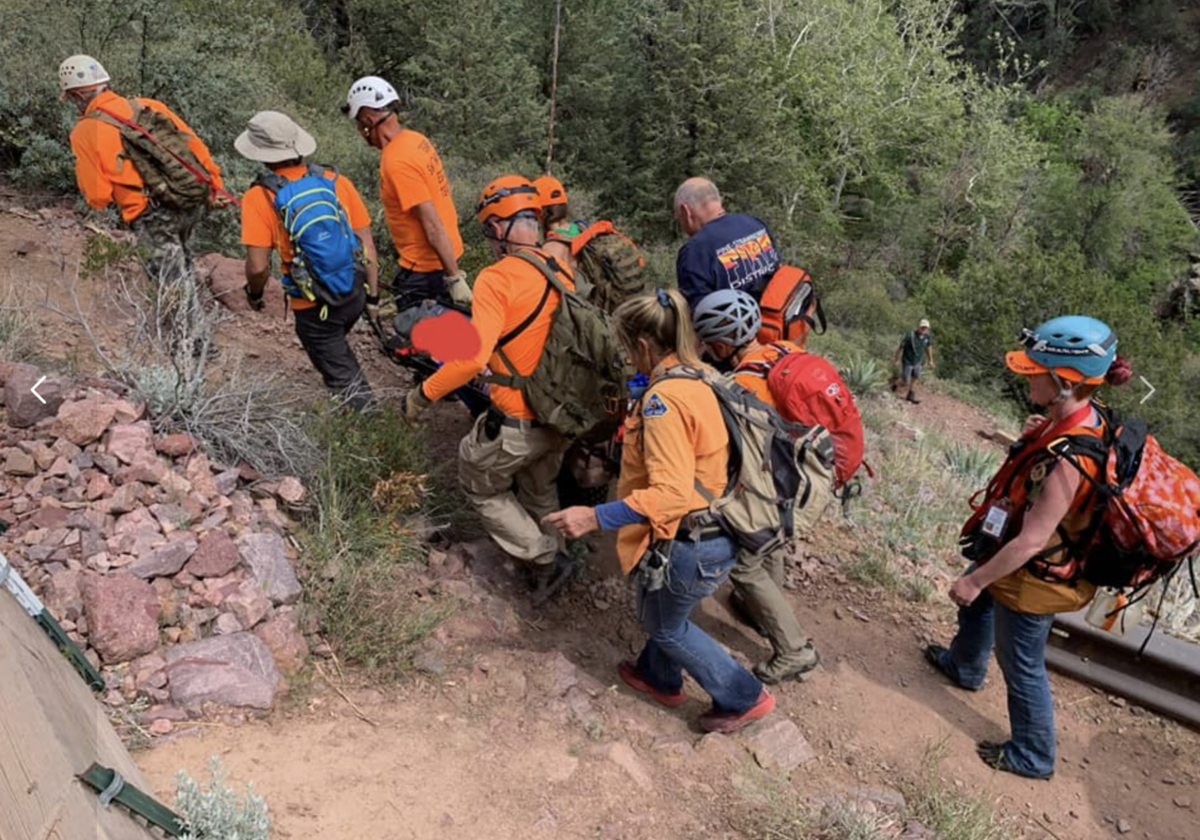 May 1, 2021 the Tonto Rim Search and Rescue crew ventured down to Tonto Natural Bridge to bring up a hiker with an injured ankle. So far TRSAR has performed more rescues this year than in any year past. 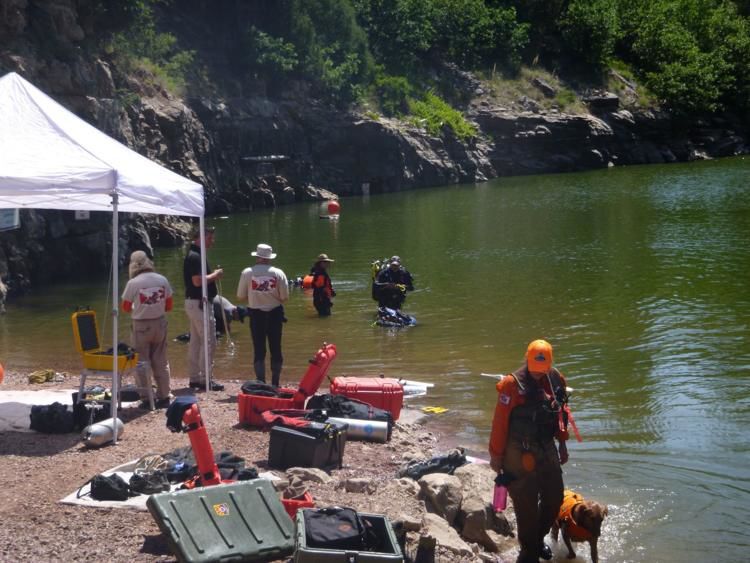 TRSAR helped with a drowning at the C.C. Cragin Reservoir last summer, working with the Coconino County Sheriff's Office. 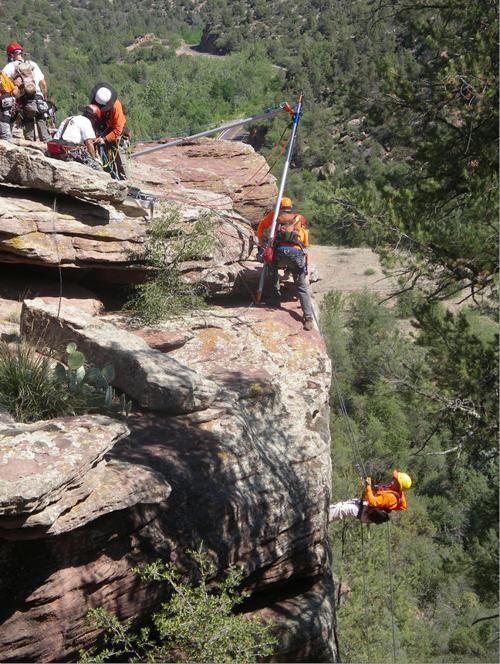 The TRSAR squad has several members trained in rope rescues. 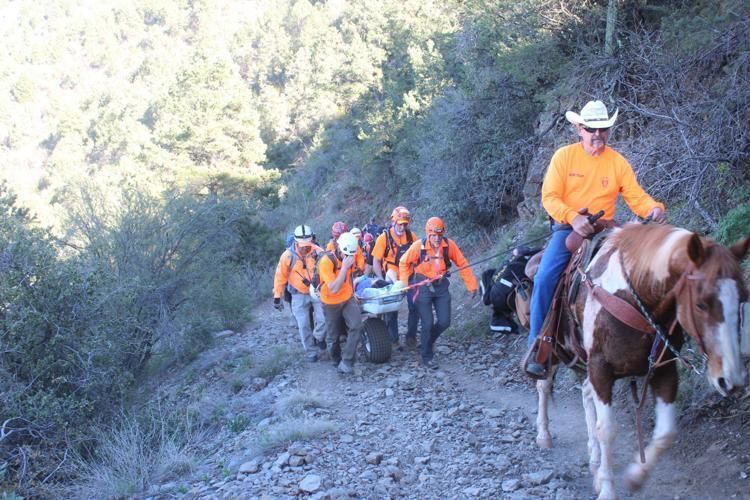 Volunteers, horses and mules are all part of the TRSAR operation. 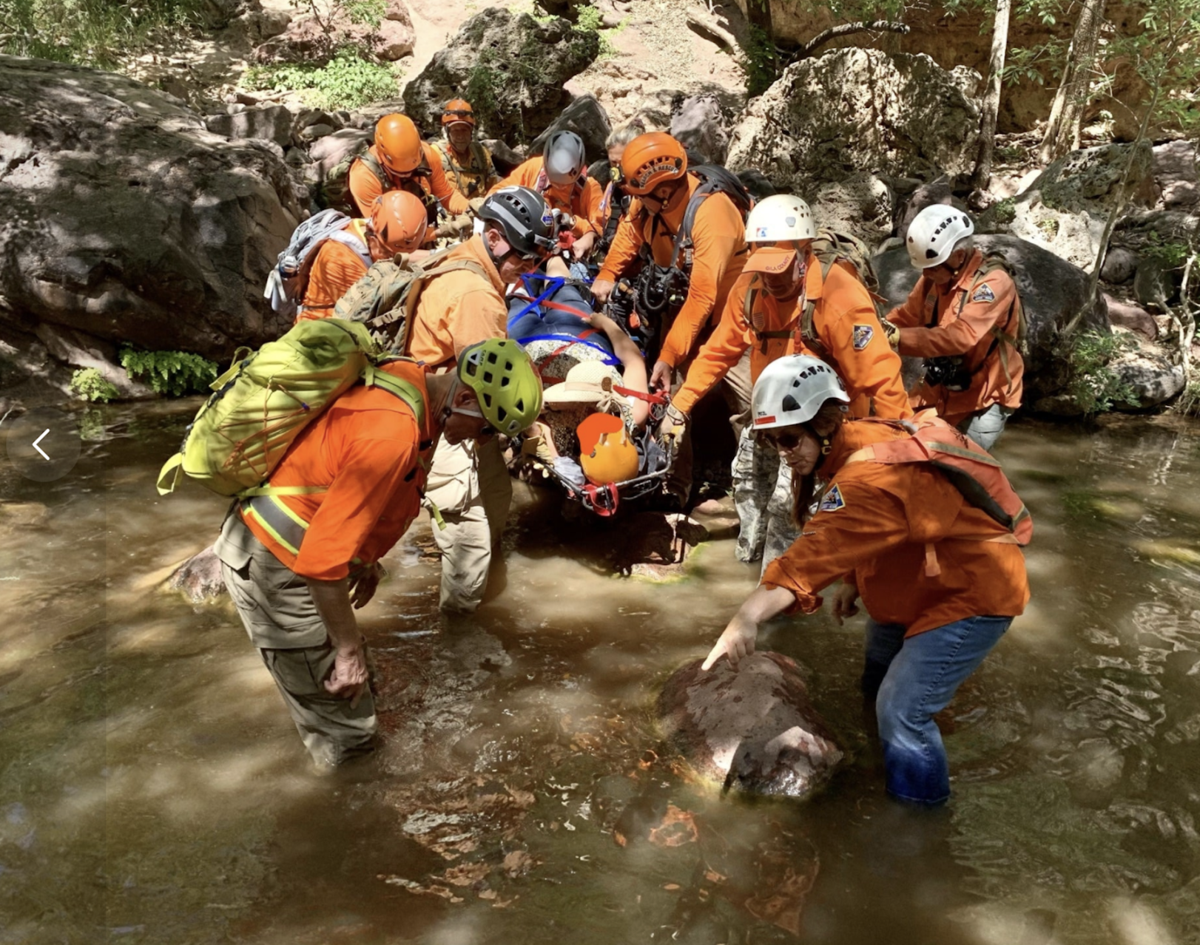 The Tonto Rim Search And Rescue team rescued a woman from the Anna Mae Trail near Tonto Natural Bridge on May 29.

May 1, 2021 the Tonto Rim Search and Rescue crew ventured down to Tonto Natural Bridge to bring up a hiker with an injured ankle. So far TRSAR has performed more rescues this year than in any year past.

TRSAR helped with a drowning at the C.C. Cragin Reservoir last summer, working with the Coconino County Sheriff's Office.

The TRSAR squad has several members trained in rope rescues.

Volunteers, horses and mules are all part of the TRSAR operation.

The members of Tonto Rim Search and Rescue have completed more missions so far this year than in any year, and that’s without a central location for their equipment.

“At the end of Memorial Day weekend, we are at 45 missions so far this year, which is 10 missions ahead of our record year in 2019 when we had 84 missions for the year,” said Bill Pitterle, the head of the organization.

For 57 years, TRSAR has found lost hikers and children, relieved those with heat stress, warmed those with hypothermia and carried out those with injured from some of the roughest terrain in Arizona.

“Our rescues typically run about 30% technical, and this year is not different,” said Pitterle. “We live in a ‘vertical’ county with many deep canyons and cliffs, and we often need to deploy technical rescue gear — ropes, swift water, dive, helicopter — in order to perform the mission.”

Each time TRSAR gets called out however, they have to scramble to gather up the ropes, tackle, all-terrain vehicles, litters and other rescue equipment to complete a mission.

He has hoped for a central location for years — not only to hold equipment, but meetings.

“We are all unpaid volunteers and raise money for equipment,” said Pitterle.

Gila County does partner with TRSAR, working hand-in-hand with sheriff’s officers as there are some tasks and equipment law enforcement must handle.

Recently, the county decided TRSAR needs better communications equipment, for “that critical last mile of communications where all cellphones and even radios often fail us,” said Pitterle. He hopes to have the system online by the summer.

Fossil Creek sees most of TRSAR’s rescues. Since the federal government restored Fossil Creek from a power source for Phoenix into a wild and scenic river visitation as soared — and so have the rescues. Hikers tend to suffer from dehydration in the summer and swimmers drown or break bones jumping from waterfalls. So far this year, TRSAR has performed 16 missions at the creek.

“It is ... an extremely difficult effort to extract someone by big wheel and litter up the Bob Bear Trail and we have had a few of those this year,” said Pitterle.

The climb out of the Bob Bear Trail requires a 1,600-foot elevation gain. The southwest exposure and lack of shade creates the perfect situation for heat stroke.

“Rescue is at least two hours away,” said Pitterle, so many find what shade they can, rest, recover and make it to the top of the trail by the time TRSAR volunteers arrive.

“We absolutely encourage that,” said Pitterle, but it still takes effort to collect all the gear and people.

For other rescues, TRSAR uses horses and mules “usually at night, and again, it is a very steep and rocky trail for this,” said Pitterle.

TRSAR is the only organization in Rim Country trained and ready to perform rescues. They welcome volunteers and support to build or find a central location for equipment.

For more information or to get involved, please call 928-978-9105, email info@trsar.org, see their Facebook page or visit their website at https://trsar.org/