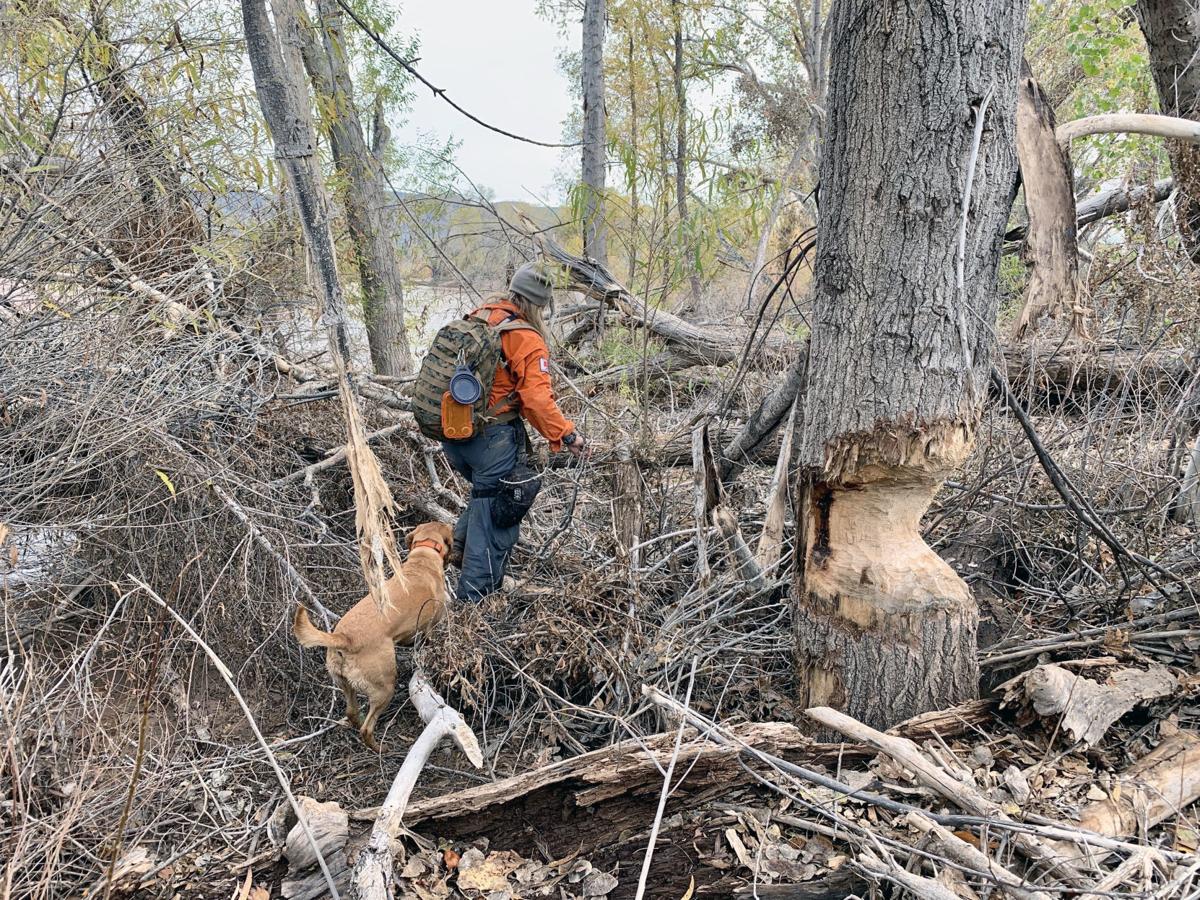 Loki and Debee Henschen, with Coconino County Search and Rescue, search the shores of Tonto Creek in December. The team is considered one of the best human remains detection teams in the state. 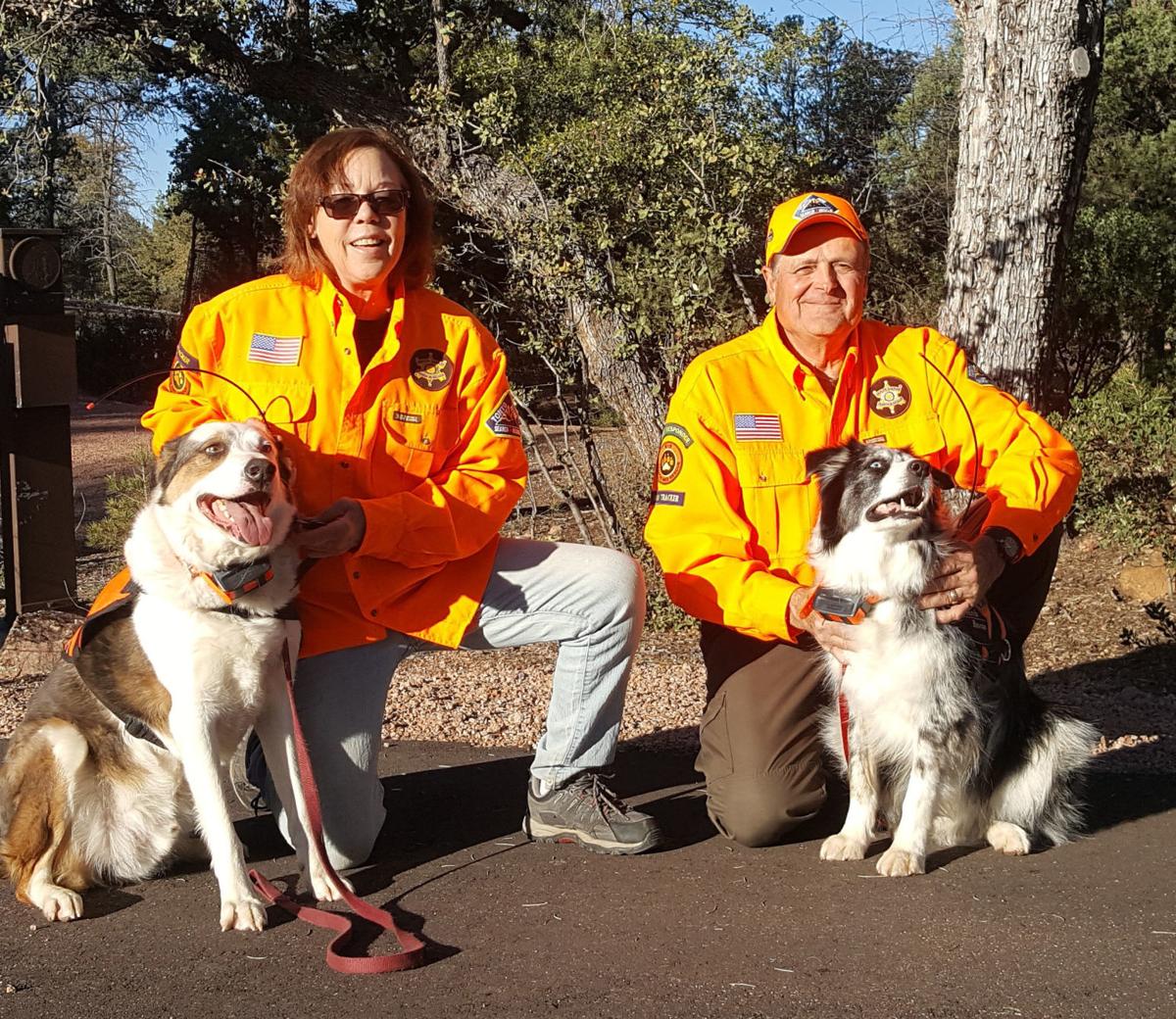 Susan Starr and Greg Reed with Ringo (left) and Chill, two of the dogs that work with the Tonto Rim Search and Rescue Dog Team.

Loki and Debee Henschen, with Coconino County Search and Rescue, search the shores of Tonto Creek in December. The team is considered one of the best human remains detection teams in the state.

Susan Starr and Greg Reed with Ringo (left) and Chill, two of the dogs that work with the Tonto Rim Search and Rescue Dog Team.

Tonto Rim Search and Rescue had a challenging and busy 2019 with a record 84 missions.

We used all of our technical gear and training on missions. We had volunteers rappelling out of helicopters and off cliffs, trudging through the snow, wading through flooded streams, diving in lakes, kayaking across Roosevelt Lake, searching by horseback and using plain old-fashioned tracking. One area of unsung heroes on our squad is the dog teams.

TRSAR is lucky to have dedicated volunteer dog trainers who train in two disciplines.

It is sad when we have to deploy the HRD team, but part of our job is to bring someone home and this team has helped families find closure.

For two weeks in Tonto Basin, TRSAR volunteers, along with volunteer rescue teams from several counties and hundreds of civilian volunteers, searched the shores and in the water. Twice passing storms added to the flow levels making searching Tonto Creek difficult and dangerous.

We deployed HRD dogs from several counties including Gila County along the banks of the river and in Roosevelt Lake to narrow the search area. Finally, on day 12, search dog Lucy, handled by Margaret Johnson of Tonto Rim Search and Rescue, had a significant hit near the Tonto Creek entrance to Roosevelt Lake. It was late in the day, so they didn’t have time to narrow down locations.

The next day, one of the best HRD dogs in the state, Loki, handled by Debee Henschen of Coconino County Search and Rescue, went out on a kayak. Loki alerted many times in the same location, and we spent several hours trying to narrow down the location — made difficult by shifting winds and currents. They brought divers in, but it was a large area to search in the extremely murky water.

Willa Rawlings, 6, was found the next day, 100 yards upstream of where we were working.

The second discipline is scent tracking and trailing. This team trains several times a month. The training is for the dogs and for the handlers to learn how to read their dogs. This team has had several “finds” over the years, but one of the best examples of this was Dec. 14, when a man went missing on the east side of Payson. This mission was the day after the 14-day Tonto Creek search had ended. They dispatched searchers as is typical for the initial hasty search to find clues.

A scent trailing dog and handler arrived and were used to help narrow down a direction of travel. With a more reasonable search to focus on, teams were assigned to look. Greg Reed’s dog Chill went to work after smelling an article of clothing from the man. He crossed a road, went into the woods and within a few minutes, located the man. For us — after a heartbreaking 14-day mission in Tonto Basin — this was a blessedly quick solution to a missing subject.

The training and certifications that go into creating search dogs are rigid and arduous, time consuming and expensive.

Susan Starr leads the scent/trailing team, and the team trains several times each month. It is a skill you have to stay on top of, for both the dogs and the handlers. Starr maintains the skill level of her team at or above the National Association for Search and Rescue certification level. Multiple successful searches over the years have proven the success of her diligence.

Watching these dogs in action is fascinating, and often if they can just provide a direction of travel, our searchers and trackers can do the rest. We consider this a “find” for the search dog and handler.

Margaret Johnson leads the HRD and area scent team. This team often travels far for training locations, sometimes out of state. A further refinement for this team is to scent in lakes and rivers. Debee Henschen from Coconino County SAR helps certify this discipline and travels often throughout the Southwest.

It is a pleasure to watch these dogs in action, from “working” to “alerting,” sometimes getting so excited that they jump off the boat to get there faster.

It is special to have such talent so close for some of our most challenging and demanding search and rescue operations.