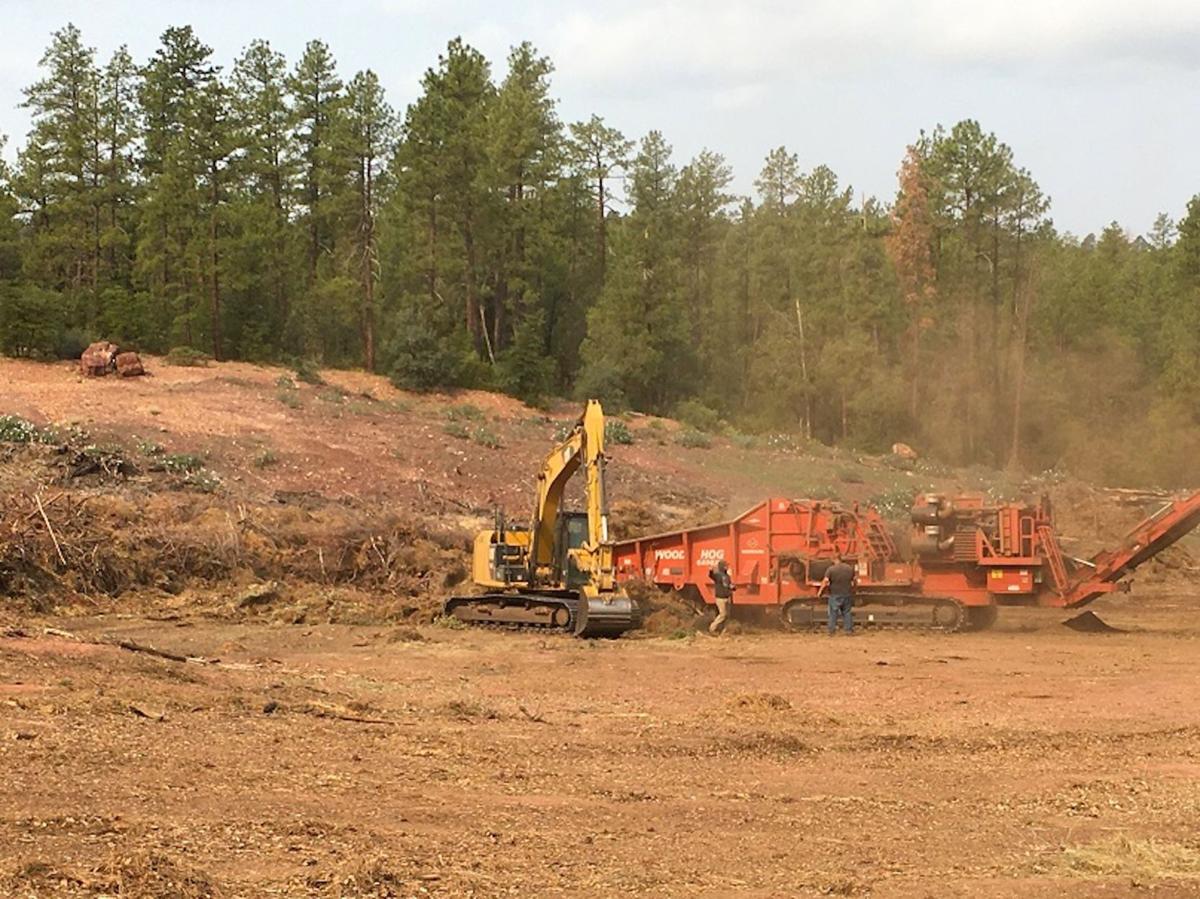 A mobile chipper unit from the West Coast nicknamed “The Beast” works on a pile at one of the brush pits. The brush provided more than 400 tons of biomass to Novopower, a biomass plant in Snowflake. The chipper also solved a capacity problem for Payson. The brush pits had started to fill with ash. 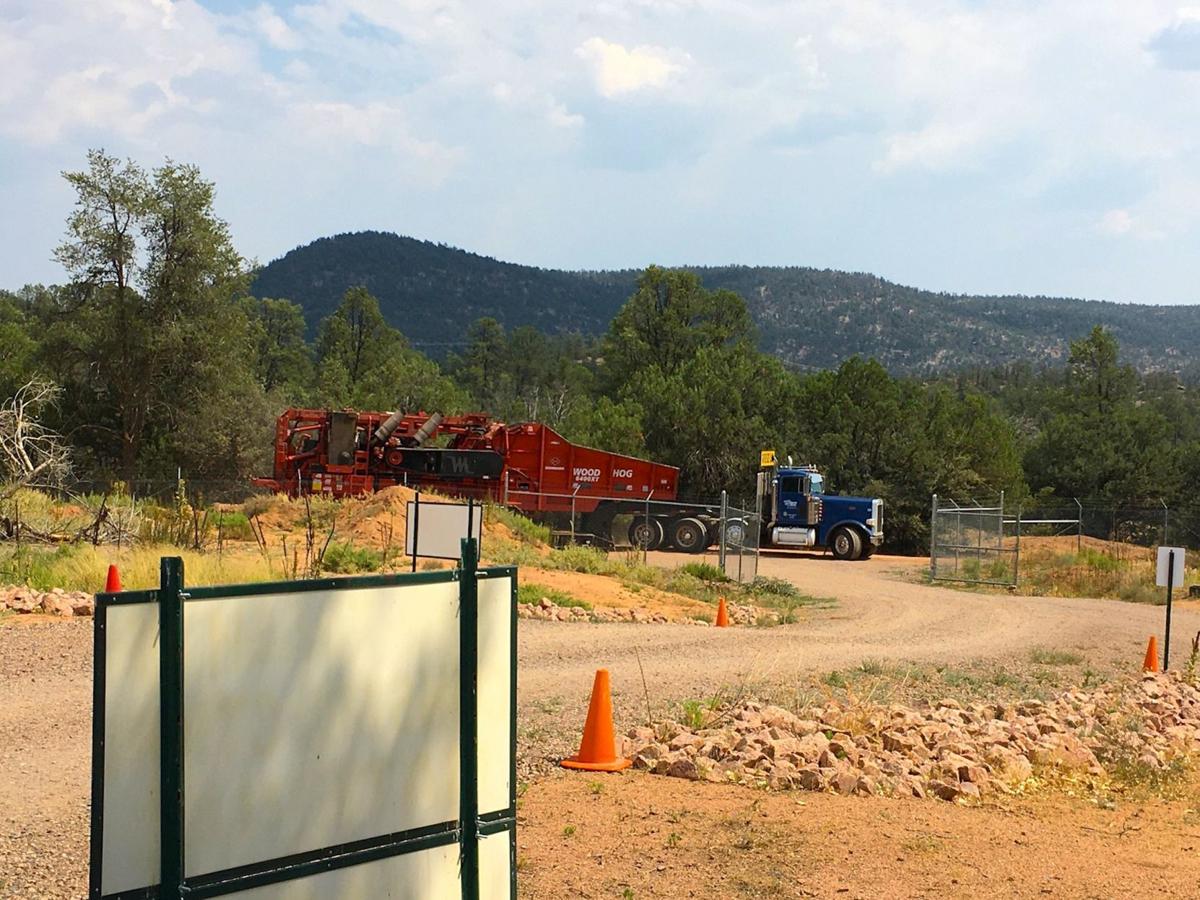 The chipper arrived hooked to a semi. It can move quickly to whatever location needed. 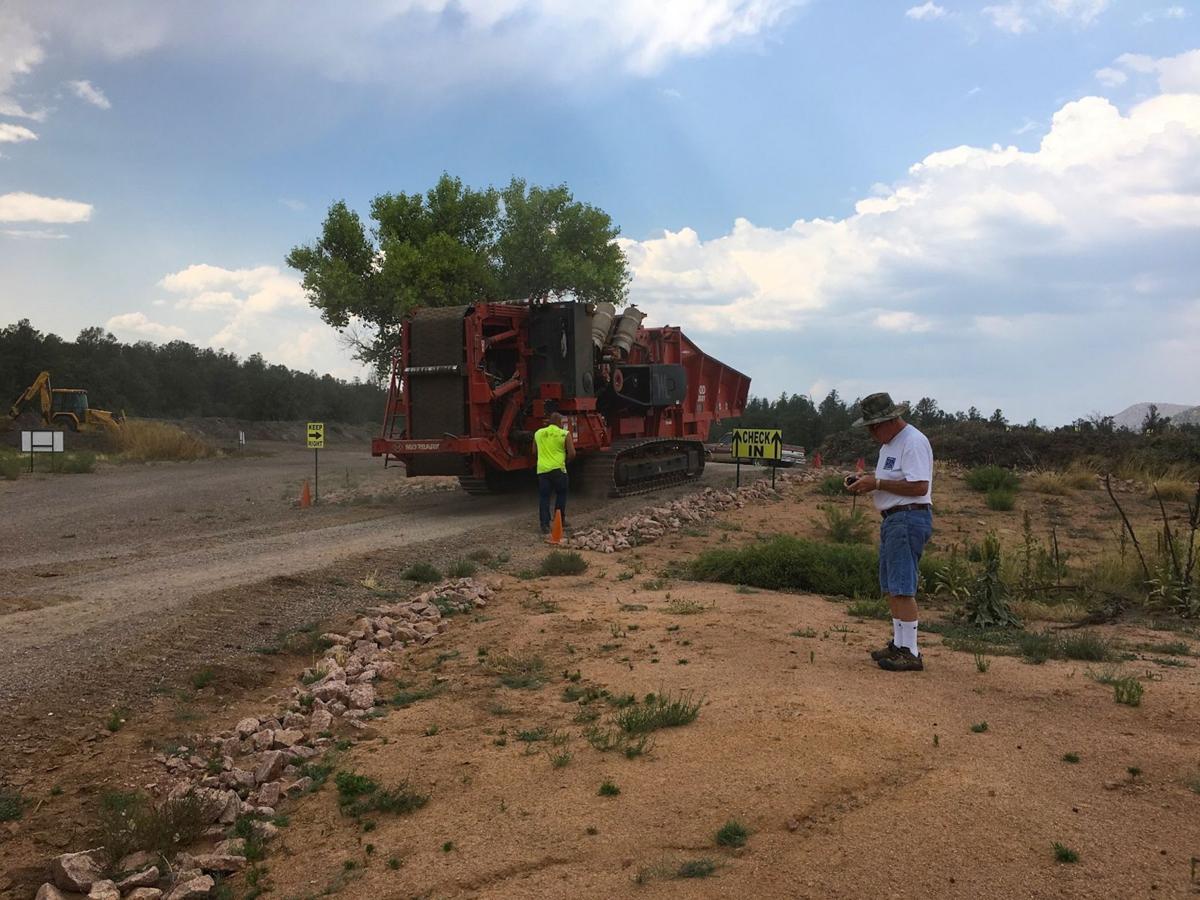 A chipper fan pauses to check if he got the photo he wanted of "the beast".

The pile of brush the chipper reduced to bio mass appropriate to Novo Power's needs.

"The Beast" quickly reduced the pile. 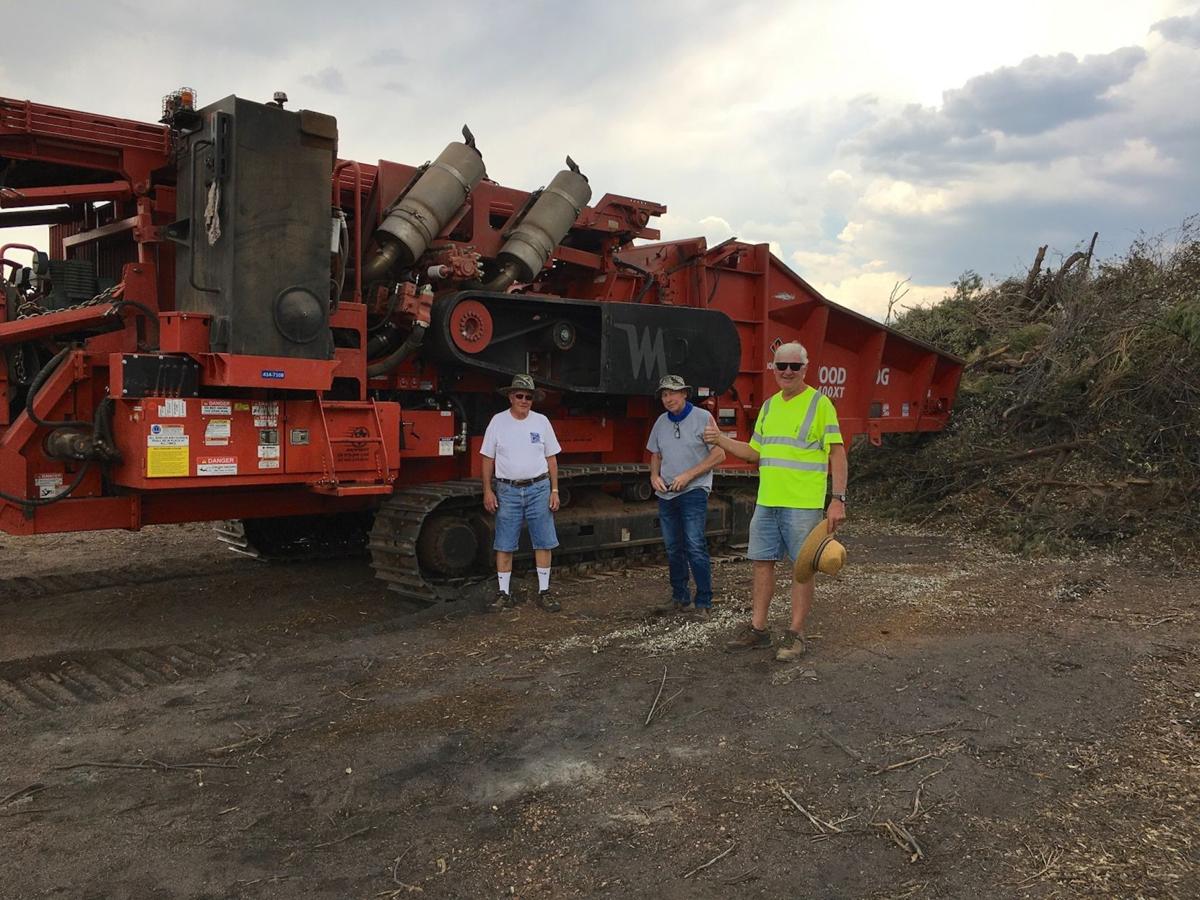 Some of the brush pit volunteers enjoy an up close and personal moment with "the beast" a chipper that help solve a capacity problem at the brush pits.

The Town of Payson decided to take a page of out Winston Churchill’s book and “never let a good crisis go to waste” when it found a solution to brush pit capacity while opening the door to a new industry for the town.

“One of the first things Toby Waugh (his predecessor) showed me was the brush pits. They are filling up with ash,” McCully told the Payson Town Council on Sept. 10.

Not only that, but Rim Country just suffered its hottest summer on record with the most days of fire restrictions ever seen before. The pits literally could not burn or they risked setting the forest on fire.

If the pits could no longer burn the brush, how would they get rid of it?

“Grind up the material and get it to the Novopower plant,” outside Snowflake, McCully told the council.

Novopower is the only biomass burning plant in Arizona. It produces about 28 megawatts of electricity annually from wood scraps. That’s enough to support thinning of about 15,000 acres annually.

Once the decision was made, everything fell in place, said McCully.

Novopower loved the idea; they always need raw material. Novopower put Payson in touch with a chipper company from the West Coast who drove the equipment out to chip at the brush pits.

McCully showed the council pictures of “The Beast” that could chip up whole tree trunks.

“They did excellent work (there was) 432 green tons of biomass waste,” he said.

Brad Worsley, who runs Novopower, lauded the contract with Payson at a recent stakeholders meeting for the Four Forest Restoration Initiative — the most ambitious forest thinning effort in U.S. history.

“Payson got hold of us and everything went smoothly,” Worsley said. “It opens up another possible market,” with forest service thinning projects going slowly overall.

The Payson contract opens intriguing possibilities to support the kinds of Firewise in-town brush clearing and fire-buffering thinning projects like those credited with saving Springerville and Alpine from the Wallow Fire.

Payson recently adopted a Firewise ordinance intended to encourage property owners to clear brush thickets and overhanging tree limbs. It was an out-of-control fire fueled by duff and overgrown brush that destroyed Paradise, Calif., killing 85 people as they fled or huddled in their homes.

Payson’s Firewise ordinance will rely on hazard assessments and mostly voluntary efforts to protect homes and neighborhoods. The Firewise ordinance could generate semi-annual brush pickups, like the efforts in places like East Verde Estates. The chipper and a contract with Novopower could absorb that mass of new material. Better yet, Novopower has pollution controls that capture most of the harmful soot and potentially heat-trapping greenhouse gases — especially compared to either burning the material in the brush pit of the effects of a high-intensity wildfire, which generate miles-high columns of smoke.

Novopower struggles to survive, however, thanks to a decade-long delay between ramping up 4FRI and the Arizona Corporation Commission’s refusal to require electric utilities to generate an additional 60 to 90 megawatts of energy from biomass annually. The mandate would have supported the thinning of about 50,000 acres of overgrown, fire-prone forest annually.

The original goal for 4FRI was to thin 50,000 acres annually, but in the past decade has managed perhaps 15,000 acres to date.

The Forest Service has been struggling to get that immense amount of thinning done without a taxpayer subsidy, but the effort has been stymied by the lack of a market for small trees and wood scraps that comprise half of the material removed.

Forest restoration advocates hope the upcoming Arizona Corporation Commission election will produce a new majority on the commission that would reverse last year’s 4-3 rejection of the biomass mandate — salvaging 4FRI and other thinning efforts.

For now, Novopower will continue to operate in limbo, unsure whether Arizona Public Service and the Salt River Project will extend long-term contracts to buy electricity from the company. Generating electricity from biomass costs a little more than generating the same power from solar or natural gas, however biomass also generates spinoff benefits by preventing wildfires and protecting watersheds.

But, in the absence of a corporation commission mandate, the power companies will stop buying power from the biomass plant.

“I can’t make a $300,000 commitment to buying a portable chipper without knowing I have those contracts,” said Worsley, president and CEO of Novopower at the 4FRI stakeholders group. “So we’re in this weird conundrum of operating as well as we’ve ever operated and burning as much wood as we’ve ever burned. A failure now (to secure long-term contracts) would be vindication of everything I’ve been warning everyone about — but it seems my warnings are going unheard. Any type of hiccup and we’d be in a lot of trouble.”

So for now, the continued operations of Novopower offer a potential support both for Payson’s bold new Firewise plans and the ongoing efforts of the Forest Service to protect Payson and other Rim Country communities by clearing buffer zones. The Payson Ranger District in the past decade has thinned roughly 50,000 acres around the boundaries of Pine, Payson and other communities, relying mostly on increasingly scarce, year-end Forest Service money. Most of those projects rely on piling up and eventually burning the biomass.

The author is promoting the election of ACC candidates who are willing to force the power companies to spend money on biomass power generation plants that they don't want or need. That will raise their cost of power generation, which will in turn increase our already expensive electric rates from APS. And, besides, how is it fair or democratic to force companies to do something against their will just because other groups want them to do so, whatever their motivation? There should be a vote of the taxpayers on whether to float a bond to pay for it, along with the resultant tax increases to pay for the bond.