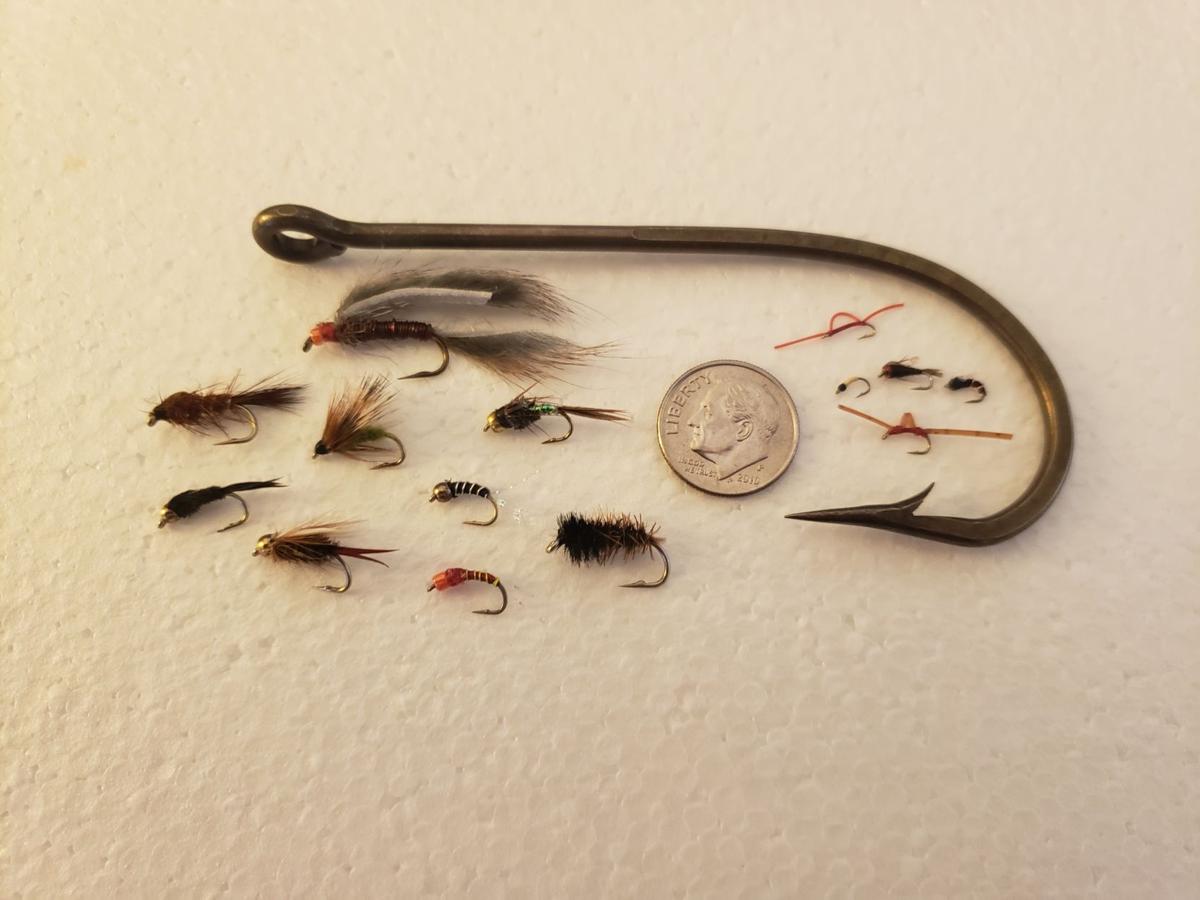 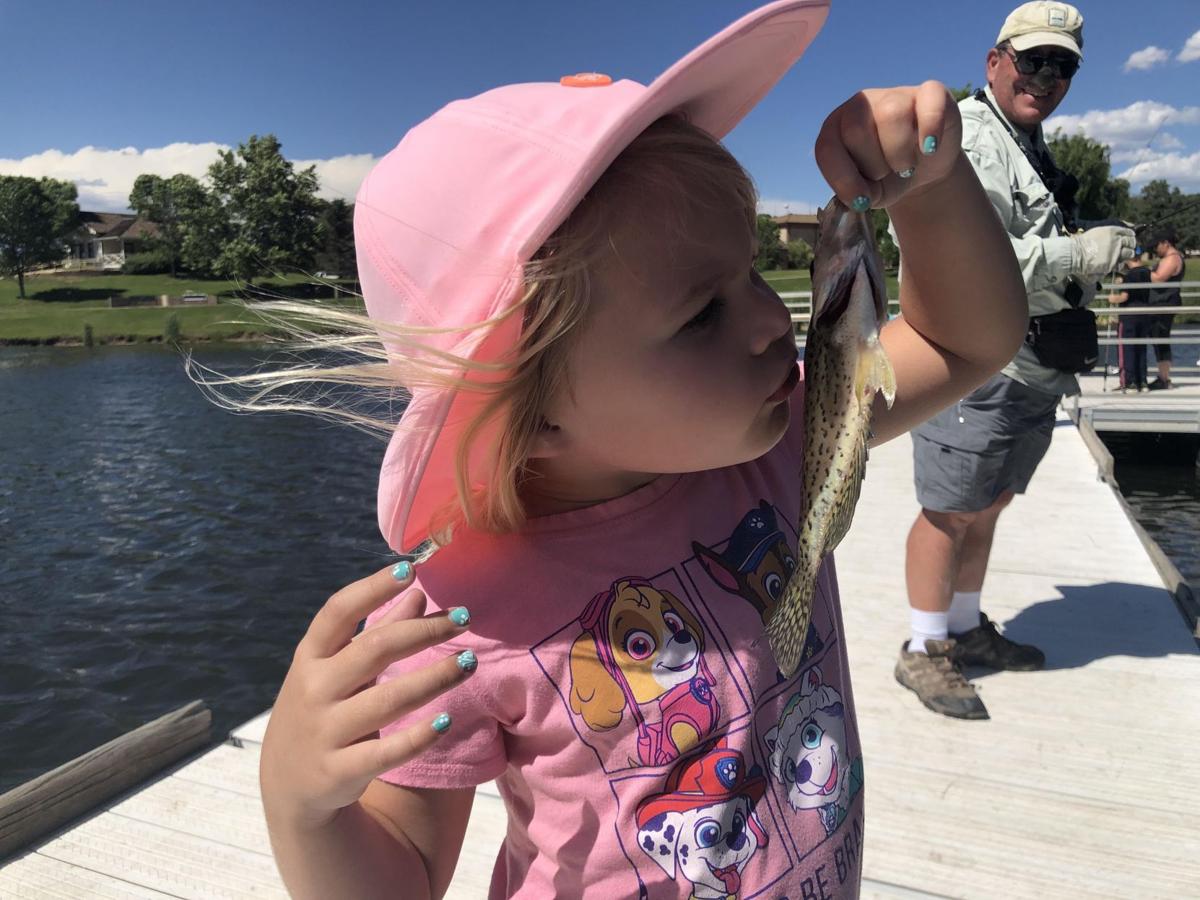 She calls crappies “Lippers” because she can hold them by their lip and they don’t poke her.

She calls crappies “Lippers” because she can hold them by their lip and they don’t poke her.

When I talk about hooks and hook size with new fly fishers, I show them a large hook my uncle used for sharks. It impresses the kids, and it is helpful to identify the parts of the hook. It also shows that the hooks we use in fly fishing are tiny.

The first thing that most fly tyers do is pinch down the barb of the hook. We do this for angler safety and quick fish release.

Otherwise, if you get a hook in your skin, the barb makes it very difficult to remove. When a fish is hooked, if we have pinched the barb down, it is important to maintain pressure on the fish as any relaxation in tension will allow the fish to release itself from the hook.

Fish caught with flies are almost always caught in the corner of the mouth and are easy to unhook, especially with a de-barbed hook. As the fish flops in the net in the water, it will often unhook itself and I can release the fish without even touching it.

Hooks come in all shapes and sizes for a variety of purposes. Wide gap, circle, offset-shank, weedless, and treble are some typical styles for bait fishers and for anglers targeting bass and catfish.

Fly fishing hooks have some variety too, and are smaller than other anglers use. If it is a dry fly hook, it is made with lighter wire to help the fly float. If it is a streamer fly, it is heavier and has a longer shank to represent the body of the minnow it is hoped to imitate.

Hooks are numbered to denote size, and it is a bit confusing. The larger hooks are designated 1/0, 2/0, etc. So a 4/0 hook is larger than a 1/0 hook. At the other end of the spectrum, with the hooks I use, the size gets smaller as the numbers increase, and the numbers jump by twos. I most often use flies with hook sizes ranging from 10 to 18.

Flies in this range work great for trout, crappies, and bluegills. I have even caught my share of bass from Green Vally lakes (GVL) in the one- to two-pound range with some tiny size 16-18 flies.

The San Juan River in New Mexico is known for huge trout particular about their fly selection. The bugs in that river are incredibly small, so fly fishers have learned that if they want to catch large San Juan River trout, they might fish with flies in the 22-28 range. That size hook is hard enough to see, and tying it on becomes an even greater challenge. What boggles the mind, though, is that not only do the fish grab these flies, but a 26-inch fish can be landed with a size 26 fly.

When I fish GVL with my younger grandkids, one rod is a fly rod set up to match the bugs in the lake, while the other rod is baited with a mealworm. Two rods keep the action moving for my new fishers.

The mealworm rod has a very small bobber with a small split shot about a foot below the bobber. The hook is generally another foot or more below the split shot. That allows the young angler to watch for any movement of the bobber as the mealworm sinks gradually after it reaches that one foot depth of the split shot.

Reacting to any movement rather than waiting for the bobber to go down completely is important to avoid the fish swallowing the hook. When we fish for crappies and bluegills, I usually use hooks in the 10-12 range. This is quite a bit smaller than most anglers I see fishing with bait. I want my hook to get into the mouth of the fish, rather than the fish simply biting the worm off of a hook that is too large to catch them.

Occasionally this results in a swallowed hook. If that happens, I do not remove the hook. Instead, while holding the fish lightly, I cut the line just outside the mouth. As long as the fish isn’t bleeding and I have handled it gently, it will recover just fine. I have caught several fish with a hook in them that has rusted. When I have kept fish like this and examined their stomach contents, the hook did not interfere with their ability to eat.

Picking the right hook size for the fish you are targeting will help you catch more fish. Especially if you are fishing with kids. It would also be a good idea to pinch down the barbs on those hooks.