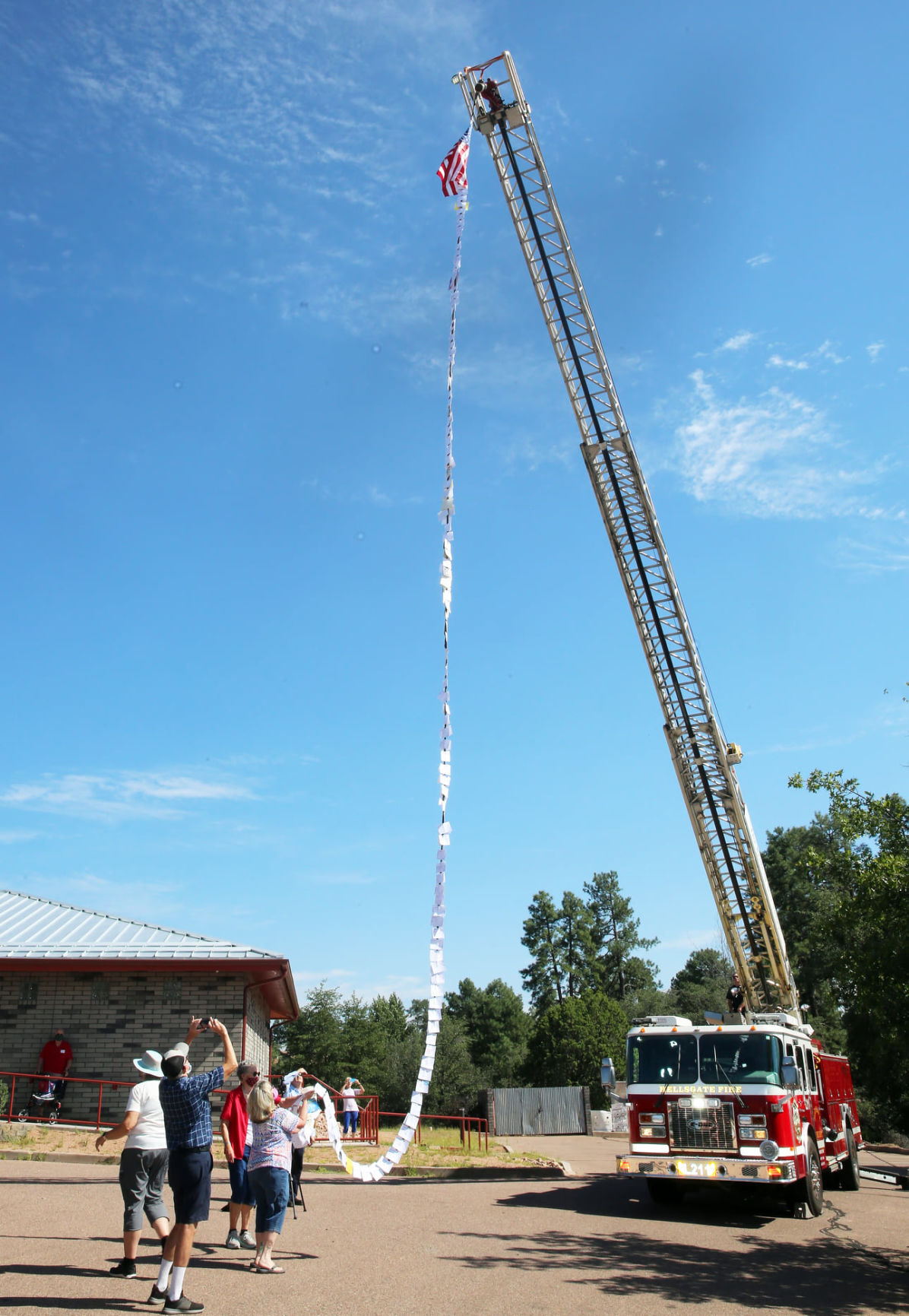 400 postcards were lifted by a Payson ladder truck Saturday to mark the 20th anniversary of 9/11. The cards thanked first responders for their bravery and sacrifice. 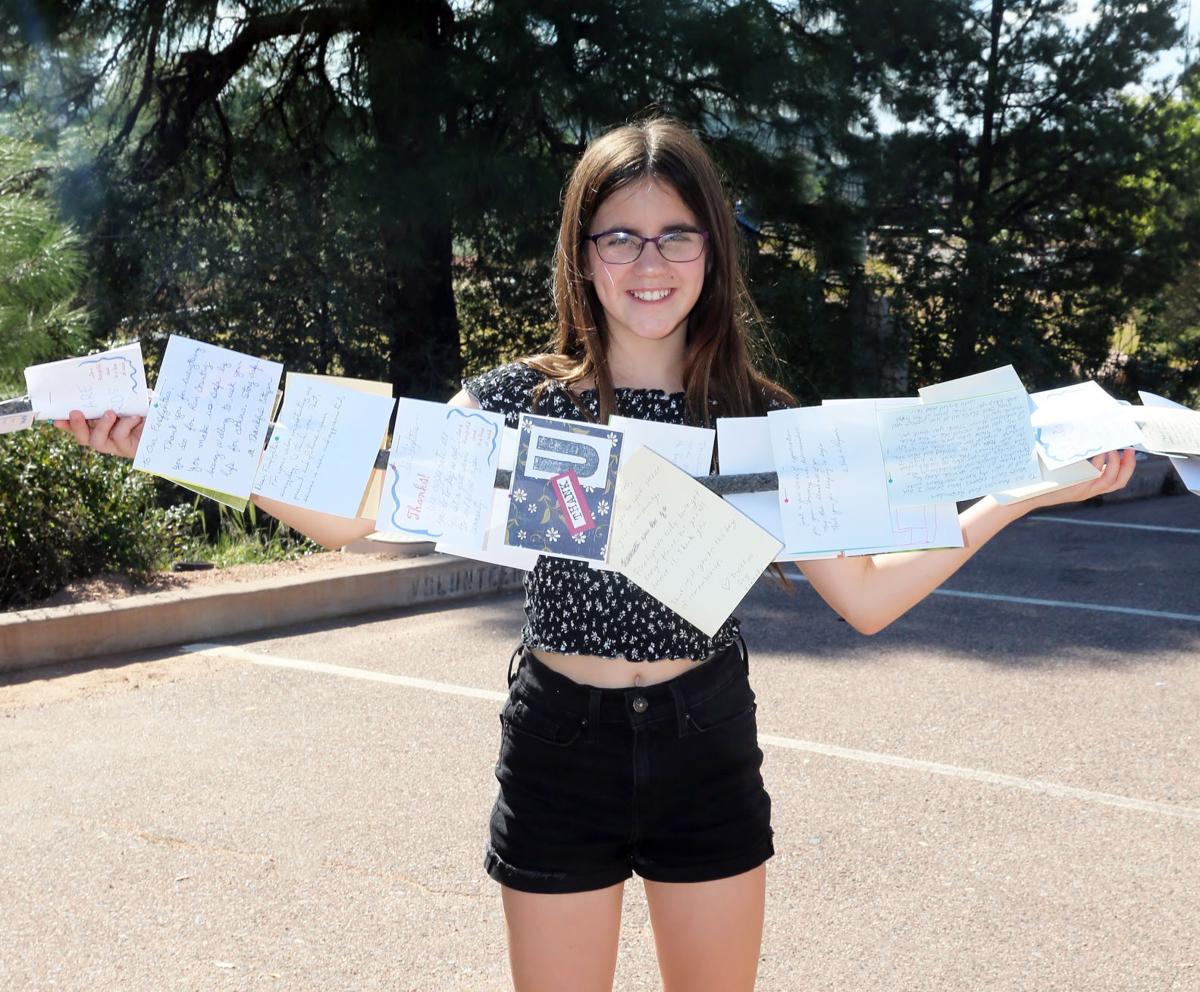 Postcards were strung together and hoisted up a ladder truck at the Payson library Saturday. 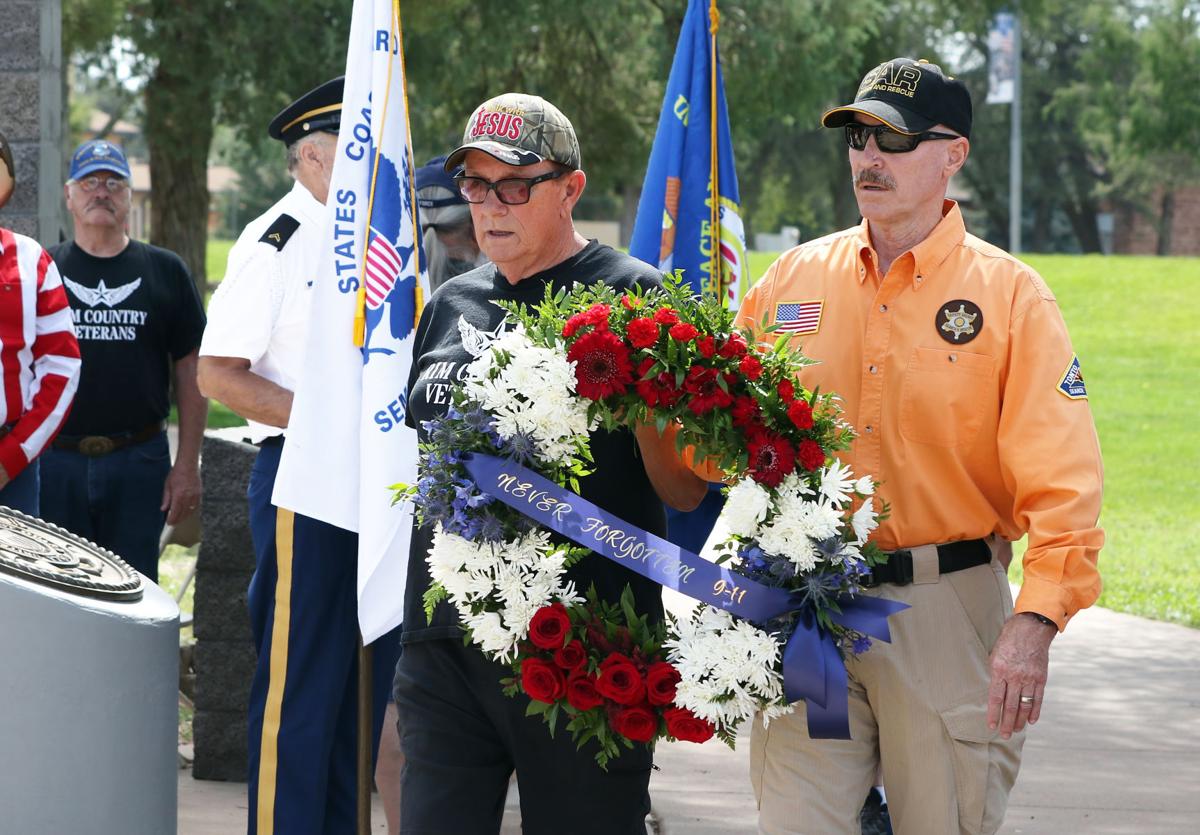 A wreath was laid at Green Valley Park Saturday to honor those who died on 9/11 20 years ago. 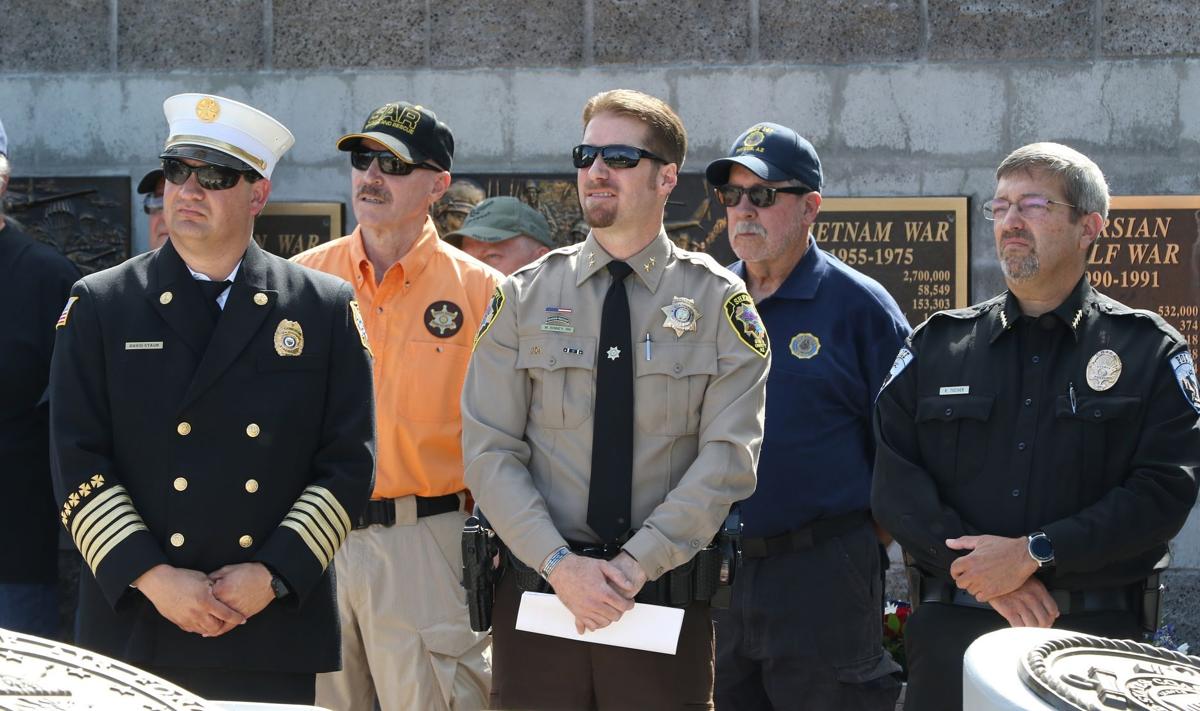 400 postcards were lifted by a Payson ladder truck Saturday to mark the 20th anniversary of 9/11. The cards thanked first responders for their bravery and sacrifice.

Postcards were strung together and hoisted up a ladder truck at the Payson library Saturday.

A wreath was laid at Green Valley Park Saturday to honor those who died on 9/11 20 years ago.

The postcards fluttered in the wind, high from the ladder truck at the Payson Public Library Saturday.

To honor the thousands who died during the Sept. 11 terrorist attacks, some 400 postcards were collected, tied to a rope and hoisted high atop a Hellsgate Fire Department ladder truck.

The Payson National Day of Service Committee had hoped to collect at least 210 hand-written postcards, symbolizing the number of floors that fell at the World Trade Center 20 years ago, but collected 400 thanks to an outpouring of support.

After the cards were lifted, a moment of silence was observed.

Many of the cards thanked local firefighters for keeping the community safe.

Across town, there was a 9/11 service at Green Valley Park Saturday morning.

Mayor Tom Morrissey was among the speakers.

“There are no words that can express the horror that we all witnessed on that day, but there is a prayer in our hearts that the Lord God will prevent it from ever happening again,” he said. “I watched those towers being built, and I watched them come down and I lost a brother-in-law as a result. The bravery exhibited by first responders as they rushed into the burning buildings in New York and Washington, D.C., the bravery of those on the plane that crashed in an open field, was extraordinary. The people who did not go home that day went on to be with God, and that is the only good thing that came out of the barbaric actions of 19 terrorists.”

DJ Craig, who photographed the event, said “it was a somber — yet beautiful tribute, marking the 20th anniversary of the attack on the New York twin towers.”

There was a procession of police, fire and ambulance trucks and Fire Chief David Staub presided over the striking of the bells, a tradition that dates back to the mid-1800s when announcements were sent from headquarters to firehouses by a system of bell commands and telegraph. When a firefighter died in the line of duty, headquarters would transmit five bell strikes, repeated in four series. This custom has continued through the years.

“To firefighters we remember clearly the number 343, the number of FDNY firefighters who gave their lives that day,” Staub said. “When we think about how to honor the nearly 3,000 citizens we lost that day and the service members we have lost since, I think the best way to honor them is to treat every day as if yesterday was 9/11. Do you recall what it was like September 12th, or the days after? When we treated each other with respect and dignity. We were kind to one another. We can disagree just do it respectfully, and remember the other person is not the enemy. In my opinion if you want to honor the people who died that day, do it two ways. First, make sure that all those too young know what happened, and two, treat every day as if yesterday was 9/11.”

The Marine Corps League presented the colors and Judge advocate Will Parz presided over the laying of a memorial wreath on behalf of the American Legion Payson Post 147.