Town of Payson CFO Deborah Barber has filed two complaints against Councilor Jim Ferris for creating a hostile workplace and defamation. In one of the complaints she also names Mayor Tom Morrissey. 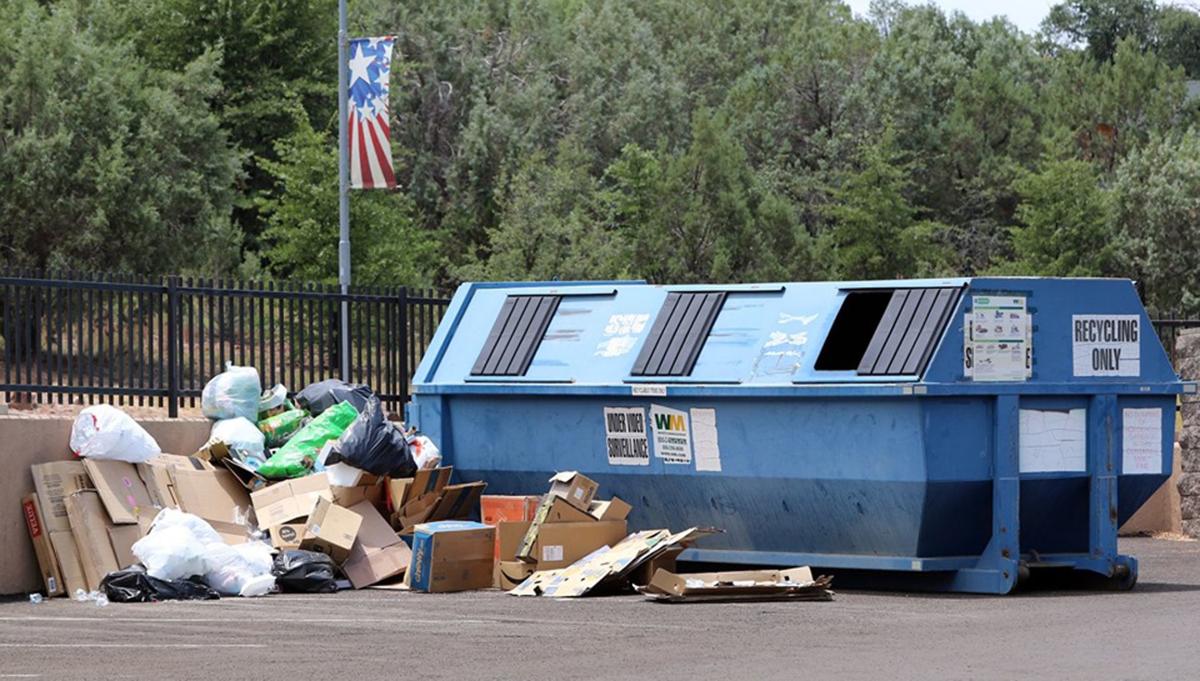 Town of Payson CFO Deborah Barber has filed two complaints against Councilor Jim Ferris for creating a hostile workplace and defamation. In one of the complaints she also names Mayor Tom Morrissey.

After years in recycling hospice, Payson pulled the plug on its long-suffering recycling program — at least for now.

The council on July 25 suspended “town-sponsored recycling bins” pending a better option from Gila County, Waste Management or another partner.

So far, efforts to recycle have mostly just made trash service for the town more expensive.

Assistant Town Manager Sheila DeSchaaf said, “The cost for regular trash collection at all municipal facilities, including off-site facilities and the parks, is $17,308 per year — excluding special events and other miscellaneous needs.”

In comparison, “The cost for the two 30-yard recycling bins that are currently being emptied twice a week is $19,200.”

And it really is trash service.

Piles of trash left next to recycling bins at Green Valley Park have spurred resident complaints for months.

Worse yet — the recycling materials inside the bins often ends up in the landfill because they get “contaminated,” and crews bring everything to the dump instead, said DeSchaaf.

“If you’re recycling pizza boxes with other boxes, they are contaminating everything. The sauce or cheese gets in the bin and it (the recycling) is contaminated. Then it all ends up in the landfill,” she said.

DeSchaaf is looking for solutions.

“The county has a new sanitation director along with a new director for the Buckhead landfill,” she said. “They are willing partners (in recycling).”

Just before the meeting, DeSchaaf had a call from “a company out of Utah” who told her “Payson is their ideal market” for curbside recycling service.

DeSchaaf said in Pinetop employees man a recycle drop-off location so trash is not thrown in as well.

Besides residents throwing garbage in recycling bins, another problem with the recycling program is that recycling products no longer have much value — to either a public or private entity because China has stopped buying our trash.

Why? Because curbside recycle programs didn’t require people to sort their recyclables. This throw-everything-in-one-recycle-bin philosophy contributed to contamination.

So just like communities across the nation, Payson is shutting down its recycling program.

“We don’t have a recycling problem, we have a trash problem,” said Councilor Suzy Tubbs-Avakian.

The average American produces about 1,600 pounds of trash every year. Even at the height of recycling, only about a third of recyclable waste actually ended up recycled — mostly at the end of that around-the-world ride on a ship.

The town has been paying for two recycling drop-off locations. One bin is at Green Valley Park and the other was in the Sawmill Theatres parking lot. The bin at Sawmill was relocated to Fire State 12, off Rancho Road, to better serve residents on the north side of Payson. The cost for the two 30-yard recycling bins that Waste Management is currently empting twice a week is $19,200 per year.

“Both locations of the town-sponsored bins have proven to be challenging,” said Assistant Town Manager Sheila DeSchaaf. “The bin at Parks and Recreation office is continually full beyond capacity utilizing only two service trips per week. When bins are at capacity, recyclables are being left in the area around the bin and/or put into the trash receptacle. This increases the cost of the town's trash service and manpower to routinely remove items from the vicinity of the bins… Unauthorized use of trash bins has also increased at the fire station in conjunction with the relocation of the recycling bin to E. Rancho Rd. Previously, when the recycling bin was located on undeveloped land at Sawmill Crossing the service provider consistently battled illegal dumping of items in and around the recycling bin.”