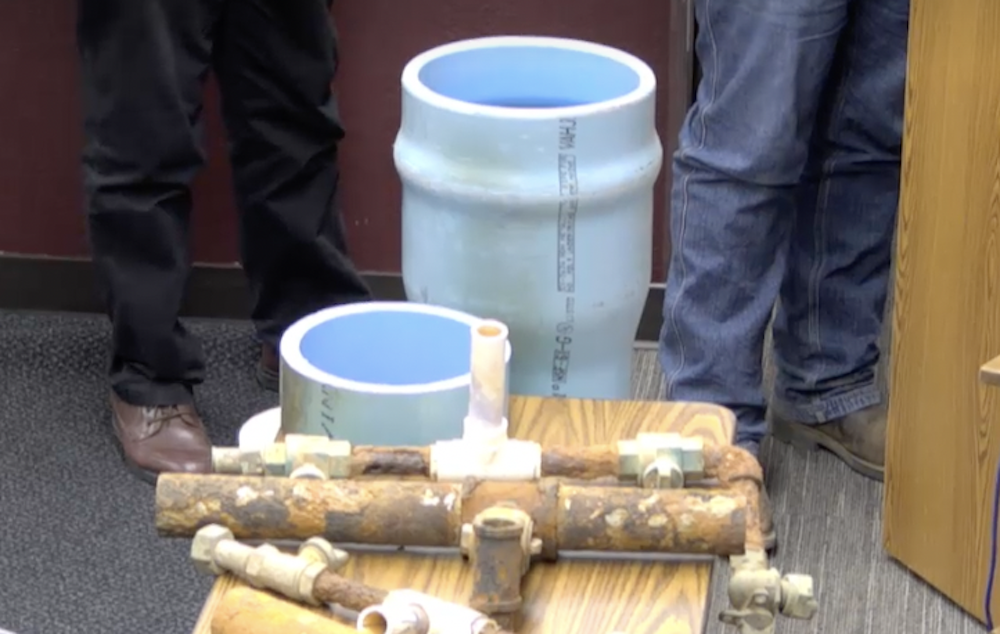 Examples of the old pipes currently delivering water to Payson residents and the new pipes the Payson Water Department would like to replace them with.

Vice Mayor Chris Higgins tells the council the base rate increase "is a more reliable income stream. It is a more fair and equitable rate increase. You would have everybody in the community, a low or higher user, contributing to a rate increase.” 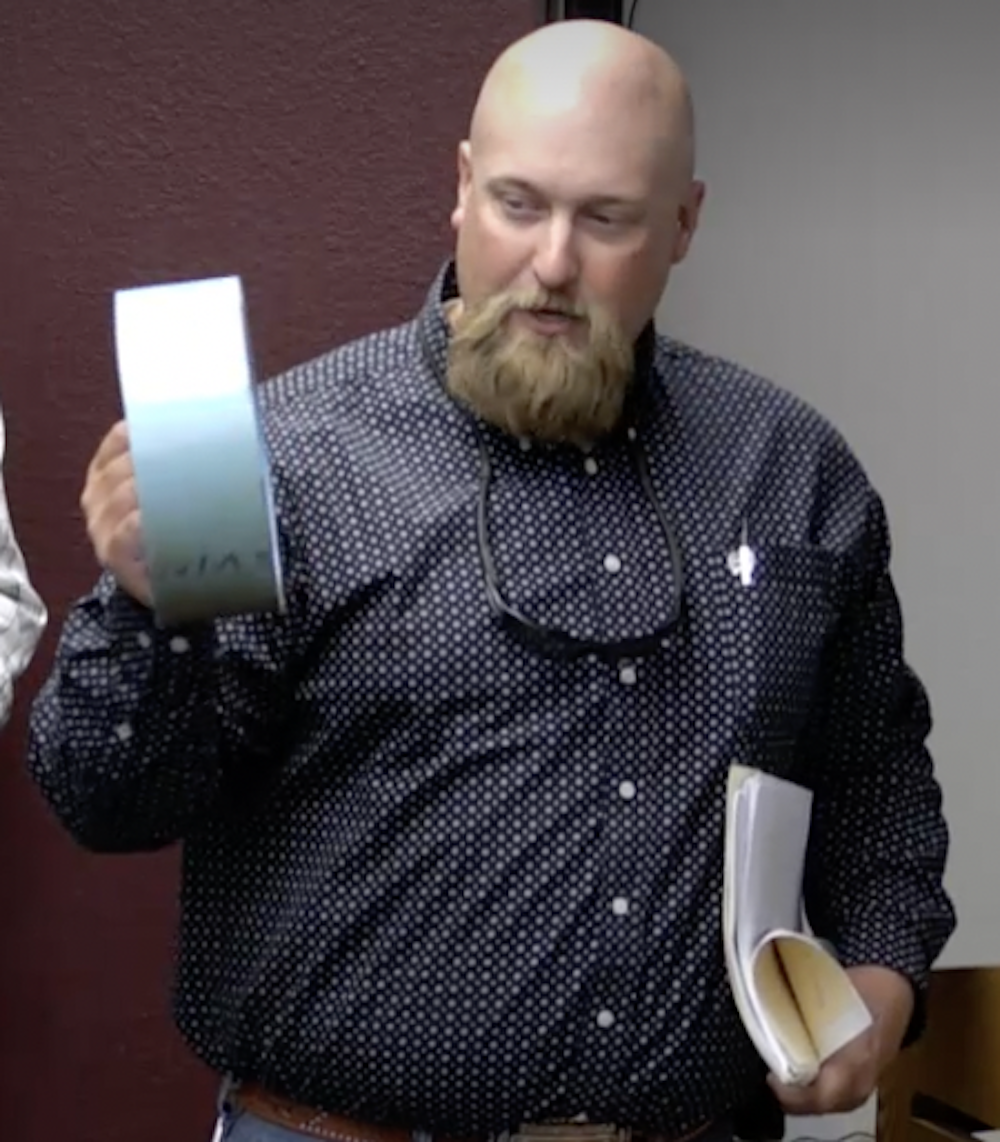 Examples of the old pipes currently delivering water to Payson residents and the new pipes the Payson Water Department would like to replace them with.

Vice Mayor Chris Higgins tells the council the base rate increase "is a more reliable income stream. It is a more fair and equitable rate increase. You would have everybody in the community, a low or higher user, contributing to a rate increase.”

The Payson Town Council last week approved a roughly 24% water rate increase phased in over the next four years that will hit second-homeowners and low-income residents especially hard.

The council knew it needed more money to upgrade the town’s aging water system, but debated how to spread out the pain at its June 10 meeting.

In March, Tanner Henry, the director of the Payson Water Department, briefed the council on the sorry state of the water mains in town. At this June meeting, he presented the council with a piece of 30-year-old pipe.

“If you notice, the walls are typically thin,” he said as he picked up a piece of newer pipe, “The kind we put in now has a thicker wall.”

He reminded the council the water department has had a few water main breaks in the last few years, which will get worse unless the town updates the system.

The water department plans to increase spending on capital improvements from $1 million up to $3 million per year to catch up on repairs set aside while they built the C.C. Cragin pipeline.

The six council members present (Scott Nossek did not attend), considered two alternative rate structures — one with a higher base rate and one with higher rates the more water you use. They opted for the higher monthly base rate.

That works out to a roughly 6% increase each year, starting in October.

Vice Mayor Chris Higgins strongly favored the high base rate, rather than emphasizing water use. “I really like the alternative one,” he said, “It is a more reliable income stream. It is a more fair and equitable rate increase. You would have everybody in the community, a low or higher user, contributing to a rate increase.”

The council rejected the alternative plan — which would have kept the base rate consistent but charged almost $10 per 1,000 gallons.

At one time, the town had some of the strictest water conservation statutes in the state. However, completion of the $54 million C.C. Cragin pipeline project boosted the town’s long-term water supply from about 1,800 acre-feet to 4,800 acre-feet — more than enough water to support about three times the present population. The project shifted the emphasis from conserving water to putting that water to use.

Payson must put the pipeline water to “beneficial use” to maintain its rights to the reservoir.

Higgins did recognize a higher monthly charge would be a challenge to lower-income residents because the flat fee will take a proportionately higher percentage of their income than a wealthier resident. Moreover, residents can’t avoid the higher base fee by reducing their water use.

Payson’s poverty rate is about 11% — and half of the families in the Payson school district qualify for free-and-reduced federal lunches based on family income. Those families also have to cope with Payson’s relatively high housing costs.

On the other hand, boosting the base rate means that second-homeowners will face a substantial bill every month — even if they don’t use a drop of water.

Mayor Tom Morrissey asked town staff whether the community has assistance for those struggling to pay.

Henry told him there are a lot of nonprofits in town that offer utility bill assistance.

“Is your experience that this solves the problem?” asked Morrissey.

Henry said yes, and if the bill is outrageous because of a leak, the water department will work with the customer on payments. The department also refers them to the Gila Community Action Program.

However, those community groups typically have limited funds to help people through a crisis rather than offering ongoing assistance.

First a couple of questions: Is the "display" piece of old pipe consistent with the overall quality of pipe and age in the system?? One can always find an outlier or give a misleading partial story for purposes of making a dire crisis presentation. PUSD and the Town has been doing that for many many years now.

The last home we had in Phoenix, the water pipe was about 70 years old and while there were breaks, they were rare and limited, so even medium quality pipe should be generally functional. Even new pipe can burst depending a myriad of outside forces including other construction in the area, faulty installation, earth shifts, settling or aid pockets, etc. That should not require a tripling of expenses.

To be honest, I have not seen or read ANY presentation by a representative of the Town staff reliable. The bias is always towards more taxes (fees), more staff, bigger government programs, excused or ignored mismanagement. The combination of these seemingly separate but compounding impacts on the limited incomes for those who have the least ability to absorb them creates horrible options that create long term damage..

It is well past time for the Town of Payson to tighten ITS belt instead of increasing the bloated bureaucracy while residents receive very limited benefits compared to other cities and towns. The researched facts are that the town is already more than 50% over staffed compared to other Arizona towns and cities.

Putting individuals and families on the social welfare rolls or lose the lifestyle they moved to Payson to enjoy while the town wallows in excess is not acceptable.

So are Chaparrel Pines and The Rim Club also on the hook for water rate hikes, or are the town's citizens the only ones affected here. That 50 year sweetheart contract the town entered into a decade ago for CC Cragin water at pennies on the dollar, sure looks questionable now! are the golf courses locked in at low rates?

We buy it from Payson water. I use my water sparingly, and it is still about $75/month.

How about using part of the over $10 million in the town slush fund to fix the water pipes? Payson is already among the highest in water rates in the state and our "servants" want to charge more. Every Payson resident has had to tighten their belts and forced to make adjustments to their household budget with the huge increases in food and fuel lately with Biden's inflation increased affecting everything else.. How about the town tightening their budget or just maintain current personnel costs in order to help the vulnerable seniors and strapped young families??

Come on, there are enough smart people on staff and on the Town Council to figure out a way to also spread the gain in revenues.