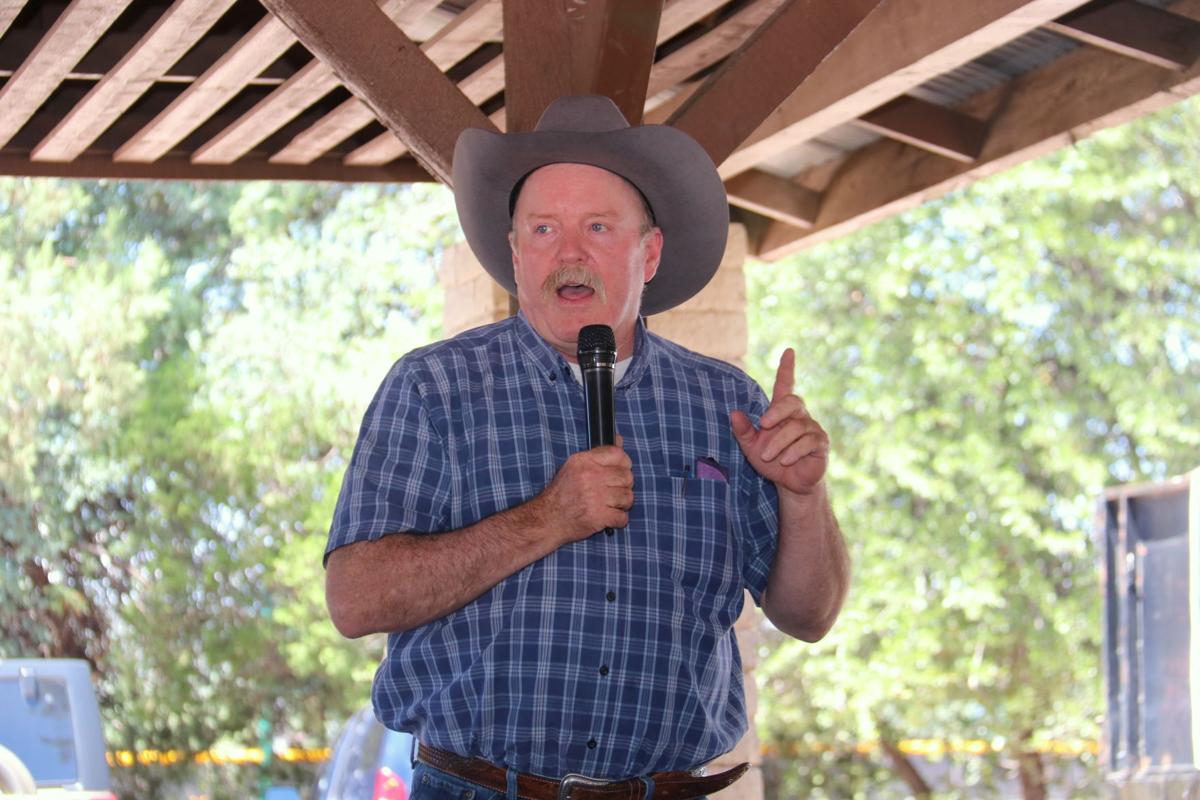 Supervisor Woody Cline speaks at the Gila County Republican Party meeting on July 27. He answered many questions about the delayed county audits. 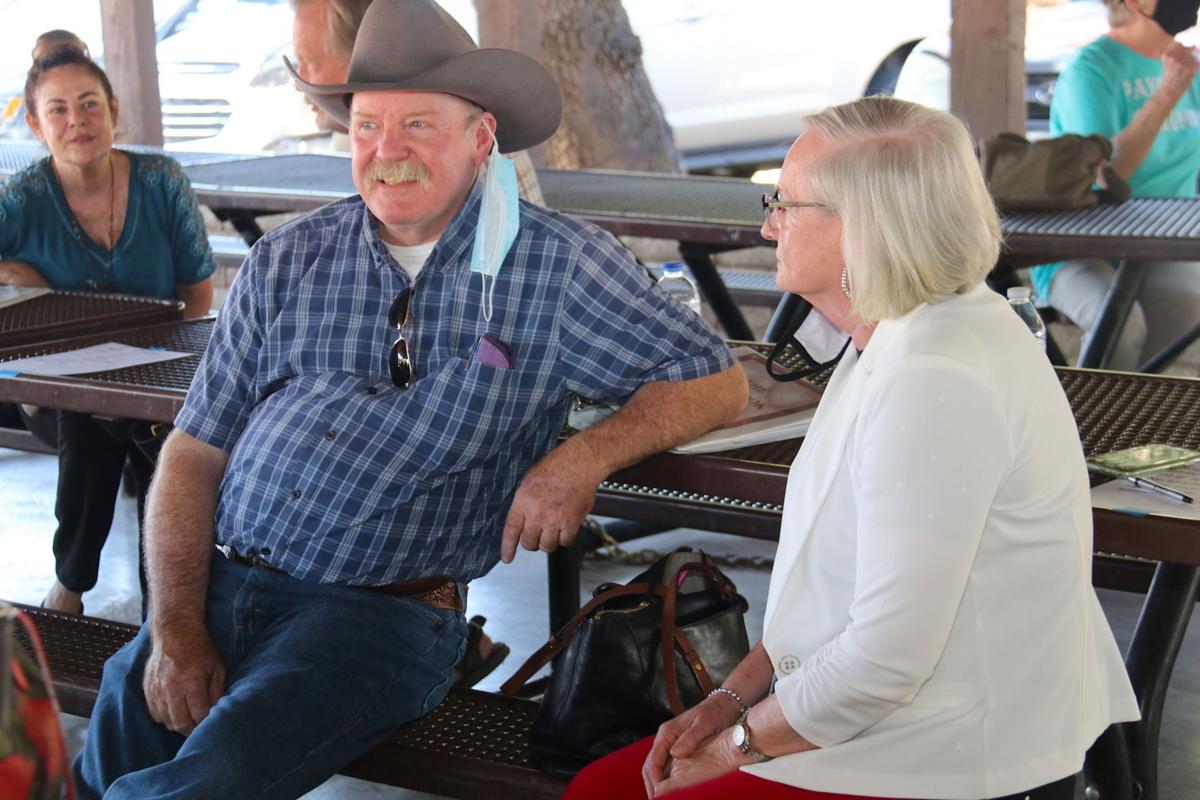 Woody Cline relaxes with a constituent at the Gila County Republican's July 27 meeting. 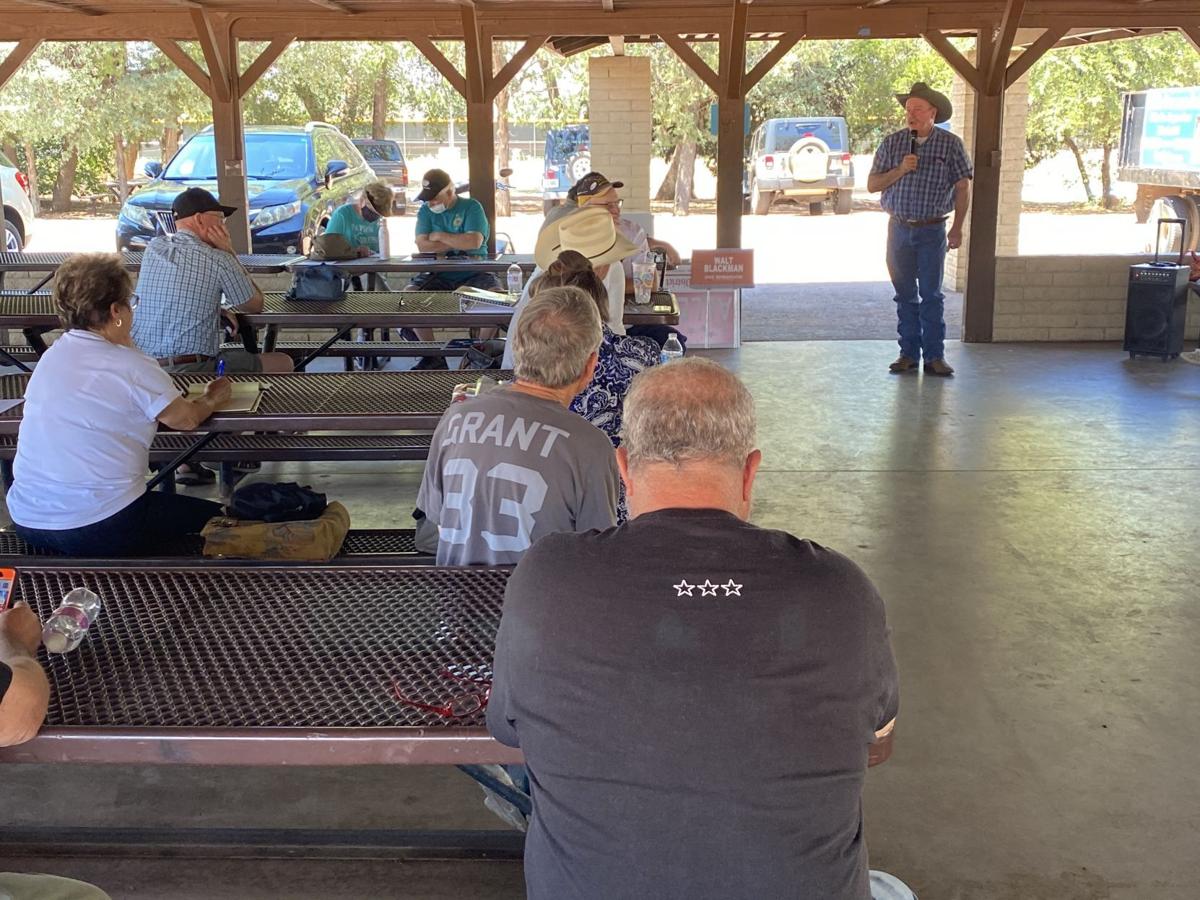 Gila County will complete a years-long backlog of state-required audits in December, instead of later in 2021, according to county officials.

The issue has become a hot topic in the race for county supervisor. Last week county officials also confirmed that the county has lost an unspecified number of state and federal grants because of long delays in completing required audits.

District 3 Supervisor Woody Cline, running for his second term, fielded tough questions about the missing audits at the July 27 Gila County Republican Party meeting. He faces no challenger in the Republican primary, but will have to contend with Bernadette Kniffin in the general election.

Armed with an article from the Payson Roundup, Rim Country resident Dave Owens peppered Cline with questions ranging from why the county did not at one point have an inventory of its equipment to why it’s taking so long to complete audits dating back for years.

Cline also revealed that the county’s computer system got hacked and the cyber thieves tried to extract a ransom to restore the system. The state auditor had warned the county about its computer vulnerability. The county is also now working through that problem, said Cline.

Last week, Cline announced to the assembled Republicans under the ramada at Rumsey Park, the county would get caught up by December 2021. But in the week after his presentation, the county finance department announced it would finish the 2019 audit by this December.

Cline said he first heard about the delayed audits when he arrived on the job, January 2017.

He blamed the understaffing of the county’s finance department for a lot of the problems.

“We’ve since staffed that finance department where it needs to be,” he said.

When Owens asked if the delayed audit snafu was the supervisors’ responsibility, Cline said the county manager runs the day-to-day operations of the county.

District 1 Supervisor Tommie Cline Martin, the only supervisor on the board long enough to have served during the years of the delayed audits, explained in a prior interview the former county manager had lost control of the finance department and hired the wrong people for the job. Both she and Cline said they must rely on the county manager to report on what the staff accomplishes.

Hallie Overman-Jackman has made the delay in the audits a key campaign issue in her effort to unseat Martin in the Republican primary.

Cline admitted letting the audit filings slip through the cracks has had “an effect on grants and our credit rating.”

“Two years ago, we lost our AA credit rating, but we’ve got it back,” he said.

Owens then asked why the county hasn’t inventoried its equipment.

Cline explained the county has purchased software to speed up the inventory process.

“This program is designed to track your fleet,” he said.

Now there is “a GPS system” installed in all vehicles to track use, said Cline.