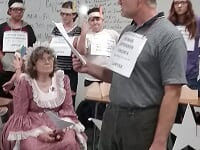 Arnold Stonebrink (as Thomas Jefferson) reads the Declaration of Independence during the Payson Daughter’s of the American Revolution reenactment of the Boston Tea Party. 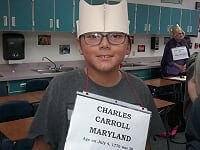 An RCMS student playing Charles Carroll from Maryland. Many do not understand the sacrifices the signers of the Declaration of Independence experienced.

Arnold Stonebrink (as Thomas Jefferson) reads the Declaration of Independence during the Payson Daughter’s of the American Revolution reenactment of the Boston Tea Party.

An RCMS student playing Charles Carroll from Maryland. Many do not understand the sacrifices the signers of the Declaration of Independence experienced.

There’s nothing like role-play to learn history, the Payson Daughters of the American Revolution learned.

“Our local chapter of the Daughters of the American Revolution were out to help us all remember where we got our basic freedoms and at what price,” said Lois Grumbo, a DAR member.

As students entered their classrooms, they were given the name and statistics on one of the signers as their identity for the hour.

“They received a tricorn hat and a sack of colonial shillings and pounds,” said Grumbo.

The DAR ladies then directed each student to their colony and gave them instructions to buy supplies, food, muskets and tea.

Then the students heard what King George had to say about them. It didn’t make them happy.

“As the students finished at the store, the King began to demand that his soldiers take away their food, muskets and their tea,” said Grumbo.

The DAR ladies asked if that upset the students. It did.

So the DAR ladies suggested they show their displeasure by throwing British tea in the Boston Harbor.

“The students seemed to really get into their roles,” said Grumbo. “They (threw tea) with great enthusiasm after donning their paper feathered headbands.”

Adding insult to injury, the DAR ladies had King George interrupt the tea party by demanding the closure of the harbor and his soldiers to take everything else the colonists had.

Then the RCMS historical actors had to figure out what to do with their anger. Thomas Jefferson offered a radical solution.

“Thomas Jefferson (teacher Arnold Stonebrink) read an abridged Declaration of Independence and each of the 150 students got the opportunity to sign a parchment copy of the Declaration with a feather pen,” said Grumbo.

Then DAR ladies added some emotion to the lesson.

“As fife and drum played softly in the background, the students read out loud the bios of their signer as to what they sacrificed for the act of signing,” said Grumbo. “There was a quiet in the room as they seemed to understand the significance of their sacrifices.”

Grumbo and her fellow DAR members had a lot of fun and believe the lesson successful — for a first time historical immersion lesson.

“I do believe that we all not only had fun, but we got our point across,” said Grumbo.

She said the Payson DAR hopes to put on another historical immersion lesson, “and maybe even work up another scenario from history to play out,” said Grumbo. “We all would do this again.”

Carol Blann and Jill Hesser ran the music and guided the signing.