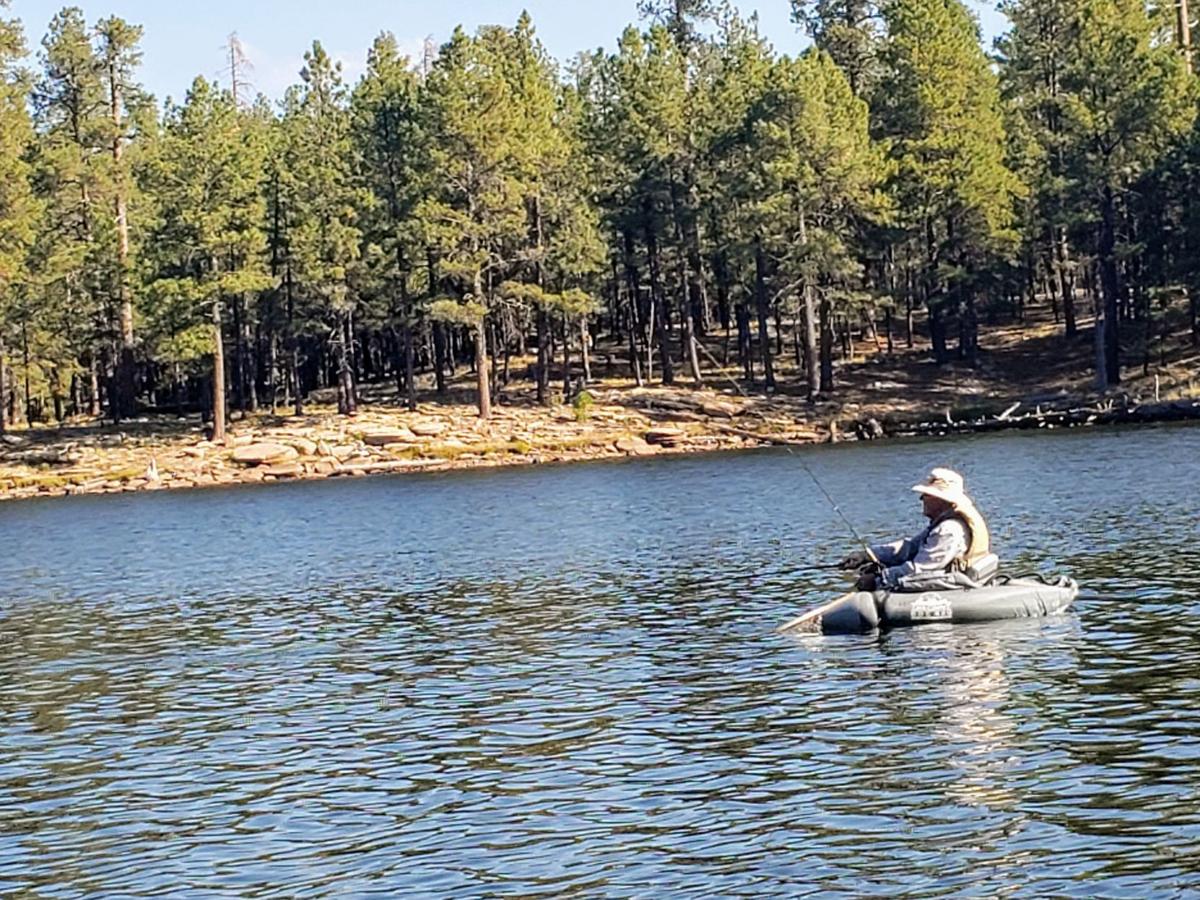 While you can fish from shore at both Willow Springs and Woods Canyon lakes, a float tube is popular with many anglers. Here Tom Herman, Payson Flycasters Club co-president, fishes in early fall. 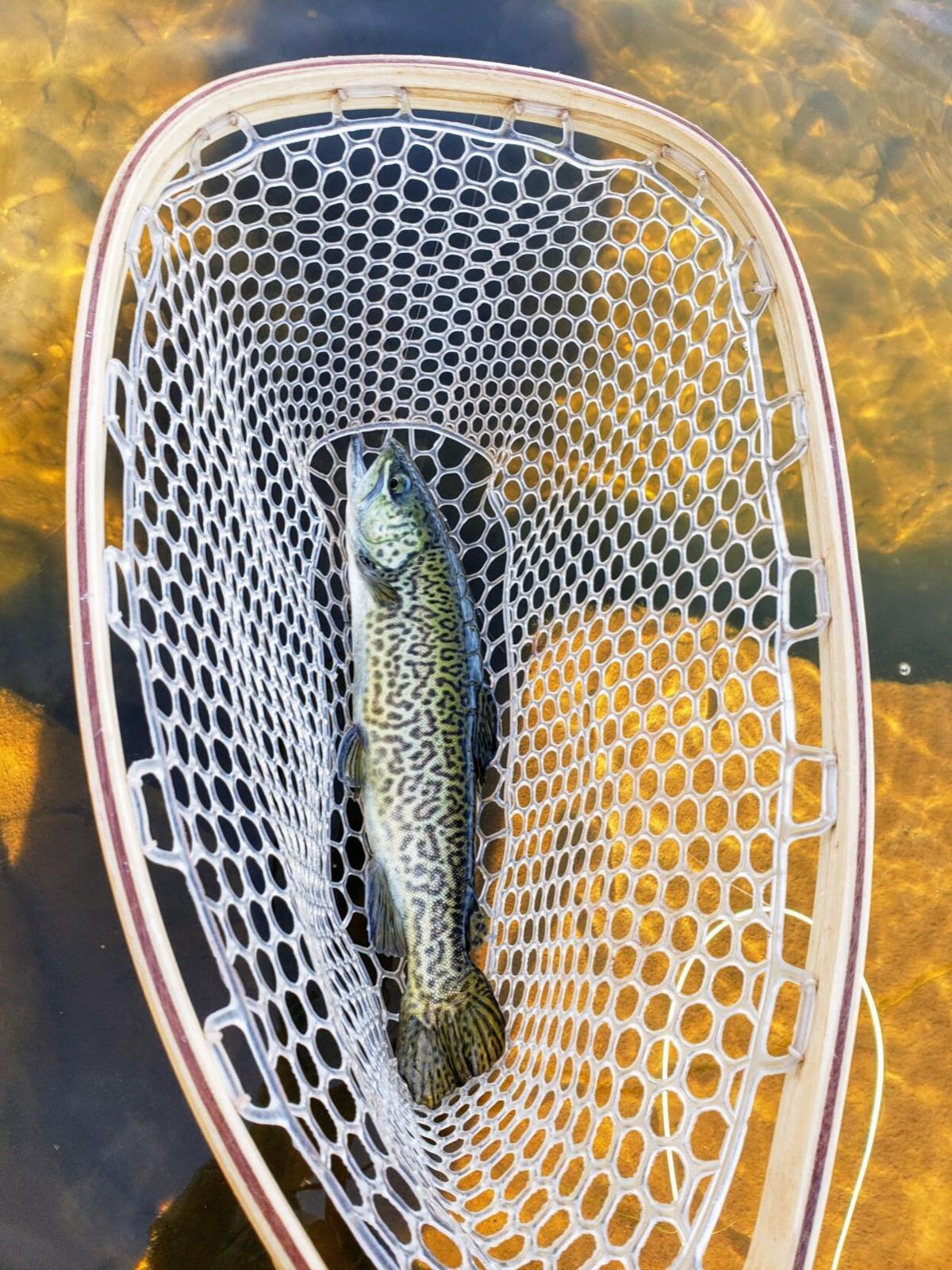 While you can fish from shore at both Willow Springs and Woods Canyon lakes, a float tube is popular with many anglers. Here Tom Herman, Payson Flycasters Club co-president, fishes in early fall.

I fish all year. One requirement for the cars I buy is that my 9-foot fly rod will fit; ready to fish. I even added some straps so it could travel quite happily for the several fishing trips I take each week to Green Valley lake, Rim Country creeks, and occasionally to the lakes on top of the Rim.

While I enjoy fishing Woods Canyon and Willow Springs lakes, I probably only fish them during the summer when my older grandsons come to visit.

If they want to catch the two troublesome invasive species in those lakes, crayfish, and green sunfish, we will take a summer trip. They like to eat crayfish, and there isn’t an easier fish to catch on a fly rod than a green sunfish. The reason that both species are so tough on waters where they have been introduced is that they are always eating, and outcompete other native species.

Green sunfish have a unique way of feeding that is fun to watch and exploit. They are often hidden under cover, like a rock or log near shore, but always on the lookout for an easy meal. As the fly comes in sight, whether it is a dry fly or a wet fly, they bolt out and grab it, then immediately head back to their lair. They have larger mouths than most other sunfish and I have not caught a green sunfish yet that did not have an extended belly. That can’t be good for other fish in the lake.

In 2016, Arizona Game and Fish Department began stocking tiger trout along with the rainbow trout that have been stocked for years in both Woods Canyon and Willow Springs lakes. Tiger trout are a hybrid cross between a female brown trout and a male brook trout. As a hybrid, they cannot reproduce. That doesn’t stop them from displaying beautiful spawning colors in the fall. In other states that have stocked them for years, tiger trout have gotten very large. While I haven’t caught one over 17 inches yet in Woods Canyon or Willow Springs, I am optimistic that each year we will see larger tiger trout in both lakes. Hopefully as these fish grow, they will put a dent in the crayfish and green sunfish populations.

While the last stocking of rainbow and tiger trout was during the week of Sept. 21, I head up to both lakes starting about mid-October after the water has cooled a bit more. During the warmer water conditions of summer, the trout are generally deeper in the lake than I can target with my floating fly line from shore.

About mid-October, until the shoreline ices up in mid to late November, the rainbows and tigers patrol the shoreline. They often are very aggressive in their strikes. I don’t know if the cold water temperatures have given them a bit more spunk, or if they are fattening up for the winter. In any case, I make several trips to both lakes in this fall window because fishing can be great.

I am always prepared to change flies frequently when fishing for fall rainbows and tigers. I usually start with a woolly bugger that I let sink five or six feet before stripping it in with short spurts and a brief pause between each strip. The trout will often smack the fly right after the pause.

Another technique is to drift a bead-head fly size (12-18) about five feet under an indicator. They can grab it while the fly is slowly sinking, or after you give the fly a little movement, imitating a real bug.

The most fun is when they will take a dry fly. Some favorite dry flies that work for me are Stimulators (10-12), Adams, Royal Coachman, Humpies, and Elk Hair Caddis (14-18).

If the wind is blowing, which happens a lot in the fall, I try to find the lee side of a point or cove to make casting easier and still have the possibility for dry fly-fishing. The fish are generally 40 feet or less from shore, and sometimes within six feet from the bank, so don’t over cast.

Remember, any fish you return to the water may grow to a very large trout for you to catch in the future. Get out and enjoy Rim Country fishing in the fall.