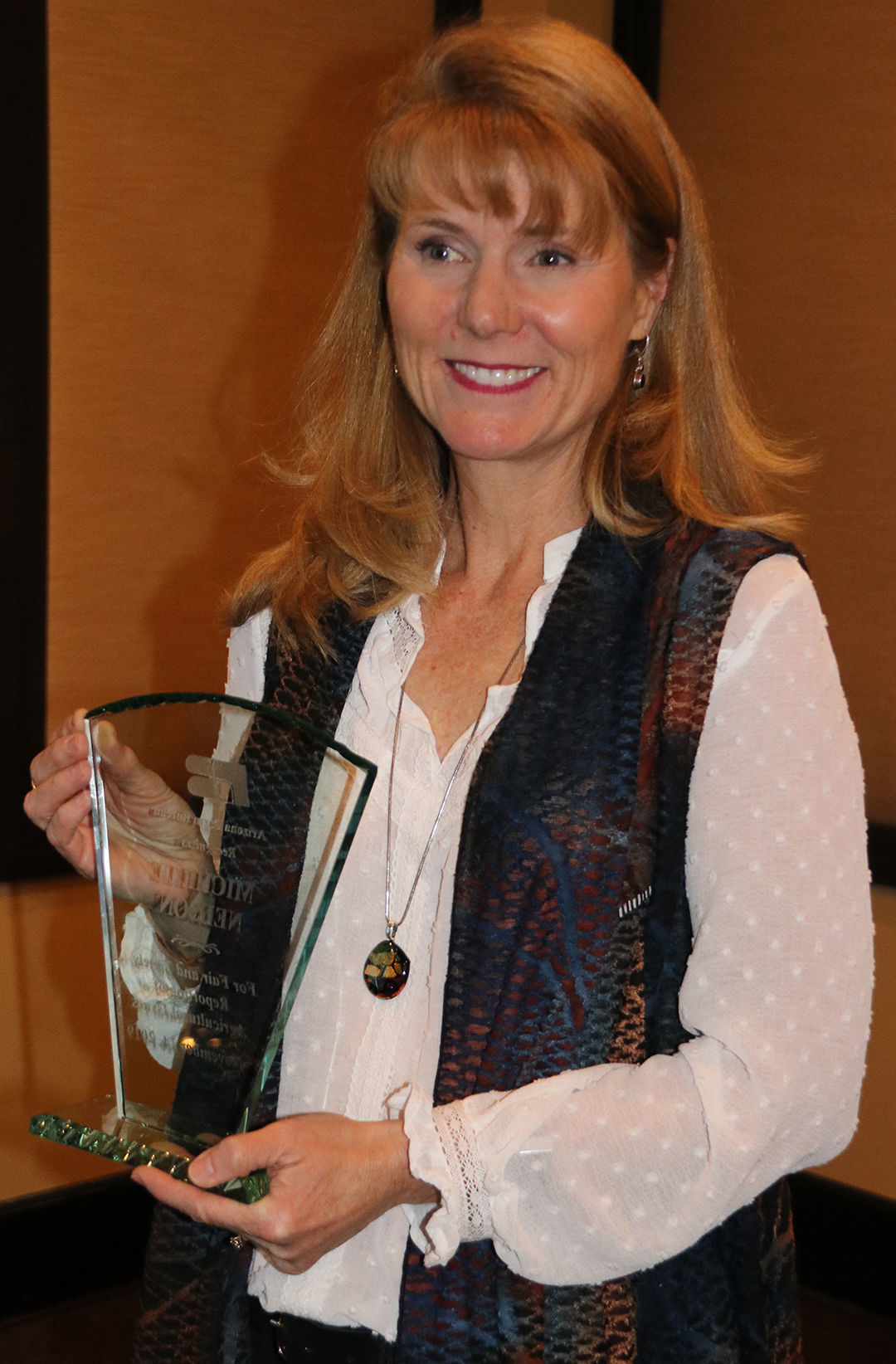 Michele Nelson received an award from the Arizona Farm Bureau for a story she wrote about ranch life in Tonto Basin and Gisela. 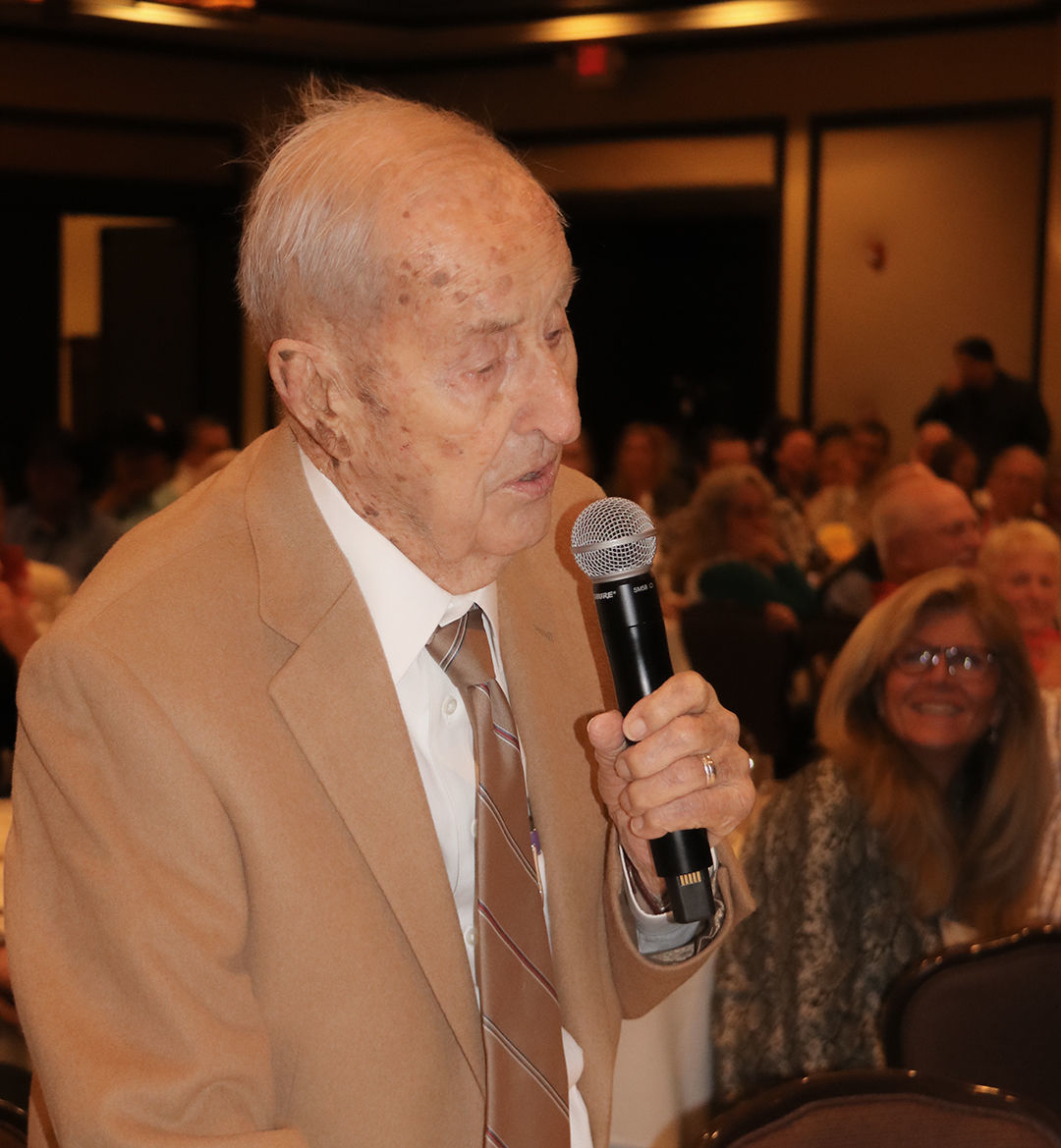 Michele Nelson received an award from the Arizona Farm Bureau for a story she wrote about ranch life in Tonto Basin and Gisela.

Nelson attended the annual convention of the Farm Bureau, which is Arizona’s chief lobbying organization for agriculture. The award recognized a series of articles including a profile of ranch life in Tonto Basin and Gisela. The Gila County Farm Bureau initially picked the story.

“Her coverage is accurate and insightful and has heart and helps people understand the joy and the complexity of ranch life — and where your food comes from,” said Arizona Farm Bureau President Stefanie Smallhouse at the Valley convention. “We really appreciate it when the media covers these issues.”

Nelson’s story captured a day on the cattle ranch of Cassie Lyman, including the family’s work with the University of Arizona to develop measurements of the condition of the rangeland — using transects and laborious tallies of every tuft of grass, bush and invasive species. The story also captured the challenges of modern ranch life, with home schooling, preparation for the county fair, kids brought up to chores and the mingling of modern technology with this deeply rooted lifestyle.

The convention brought together leading farmers and ranchers from across the state and focused heavily on regulatory and policy issues that unite farmers, in an era of water shortages, trade wars, technology changes and environmental challenges.

Several hundred ranchers and farmers debated policy issues for the coming year. In the past year, the group played a role in securing $29 million in state funding for wells in central Arizona to make it possible to ration water from the drought-plagued Central Arizona Project without devastating farming operations.

The group also won a $14 million sales tax exemption for pesticides and fertilizers critical to maintaining high yields. The group supports programs like Future Farmers of America and other education programs that reach 110,000 students annually.One survey found that most Americans are now three or four generations from the farm and no longer have a clear understanding how their food is produced. One 2017 survey found 7 percent of Americans believe chocolate milk comes from brown cows.

The convention honored an all-star list of Arizona farmers and ranchers for their contributions to agriculture — some in the past year, some in the course of a lifetime.

A Heritage Award went to Carl Stevenson, who in his 102 years has made profound contributions to the cattle industry. As the developer and builder and decades-long operator of feed lots, he invented ways of treating oats and grains that increase the growth and health of cattle. His methods have become the industry standard.

The World War II veteran rose shakily to his feet to accept the award and offer a wickedly funny, rambling summary of his long and eventful career. “I’ll tell you, for the first 100 years you’re great — you can do anything. It gets a little rough after that,” he deadpanned.

He said he went to veterinary school in the Army during World War II which set him on his path into ranching. He spent most of the war attached to the Moroccan Army, which relied on horses and mules. He was ultimately dispatched with 10 soldiers to Germany to set up a veterinary school.

After the war, “I married a girl — believe it or not — and we moved to Kingman.” His little speech capturing the humor, common sense and family values that defined so many of the people in the room. “We got into the cattle feeding business and now my kids do all the hard work. When they were little, I paid them 25 cents to clean the water troughs — and they’re still complaining about it.

Rancher of the Year

Pinal County rancher Chuck Backus was named the Rancher of the Year. A nuclear engineer who taught engineering at Arizona State University, Backus also founded the first farm in America that relied entirely on solar power. He has spent the past 40 years developing and implementing technological innovations to support sustainable agriculture. He still does seminars for ranchers on using technology “and improving your bull selection, which is what it’s all about,” he added.

His remote ranch in the Superstition Mountains relies heavily on work done from horseback. “I tell people, if I can make a go in the rocks and canyons and cactus, you can do it on good ground.”

Smallhouse noted that the elderly engineer-farmer had a serious accident recently in which “the horse went one way and Chuck went another. We’re just glad to have him with us.”

Roughly 1 in 12 American jobs are connected to agriculture, linked to the nation’s 2 million farms and ranches. The number of farms in the U.S. peaked in 1935 at 6.8 million and has declined ever since. Farmers still cultivate a billion acres, but big corporate farms have replaced many of the family operations.

Modern farming remains entangled with government policies, including fresh challenges to the nation’s food safety system. In January, the federal Centers for Disease Control reported 62 cases in which a toxic strain of E. coli sickened people in 16 states — including 25 people who were hospitalized. The crisis followed a larger scare in 2018. Some 90 percent of the winter lettuce comes from Yuma, which daily ships hundreds of thousands of heads of lettuce every day all winter.

Farmer of the Year

Yuma lettuce grower John Boelts was named Farmer of the Year for his role in coping with the crisis, which involved hundreds of media interviews including appearances on national television. Boelts operates a “small,” 2,000-acre vegetable operation and has amassed an encyclopedic knowledge of E. coli, federal investigative techniques and ways to minimize contamination. He represented the industry throughout several recent crisis, which had the potential to wipe out many growers.

“I appreciate the honor and the support of my wife and kids, since I’m the guy who comes home after a long absence and says, ‘I just got asked to go on ‘The Dr. Oz Show.’”

The use of chemicals, manipulation of crop genetics, massive investments in equipment and a relentless focus on efficiency, farm subsidies and corporate profits have doubled farm output between 1948 and 2015. However, the number of people living and working on farms and ranches has plummeted — hollowing out many communities in farm country. Gross farm income is almost $500 billion, a leading export sector. The average farm income is $75,000, but many small farmers live on incomes of $10,000 and scramble to hold onto their lifestyle.

Corn and soybeans account for 40 percent of the $197 billion in U.S. crop receipts, but trade wars have had a big impact on that sector — with debt on the rise.

Animal products account for another $178 billion, with cattle and calves totaling $67 billion in sales nationally.