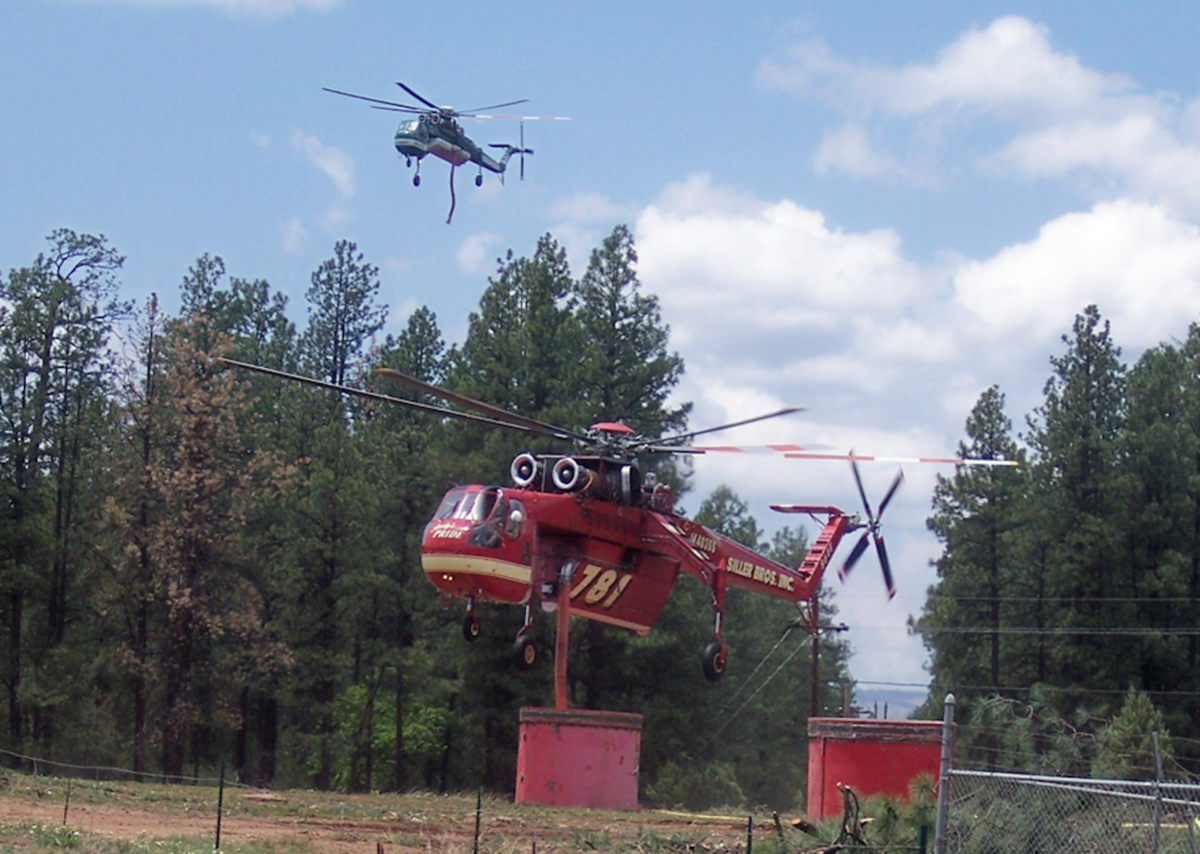 A helicopter fills up with water at a Gila County 20,000-gallon bladder supported by a tank. This system has worked for more than a decade, but now faces the threat of shutting down for lack of replacement bladders. 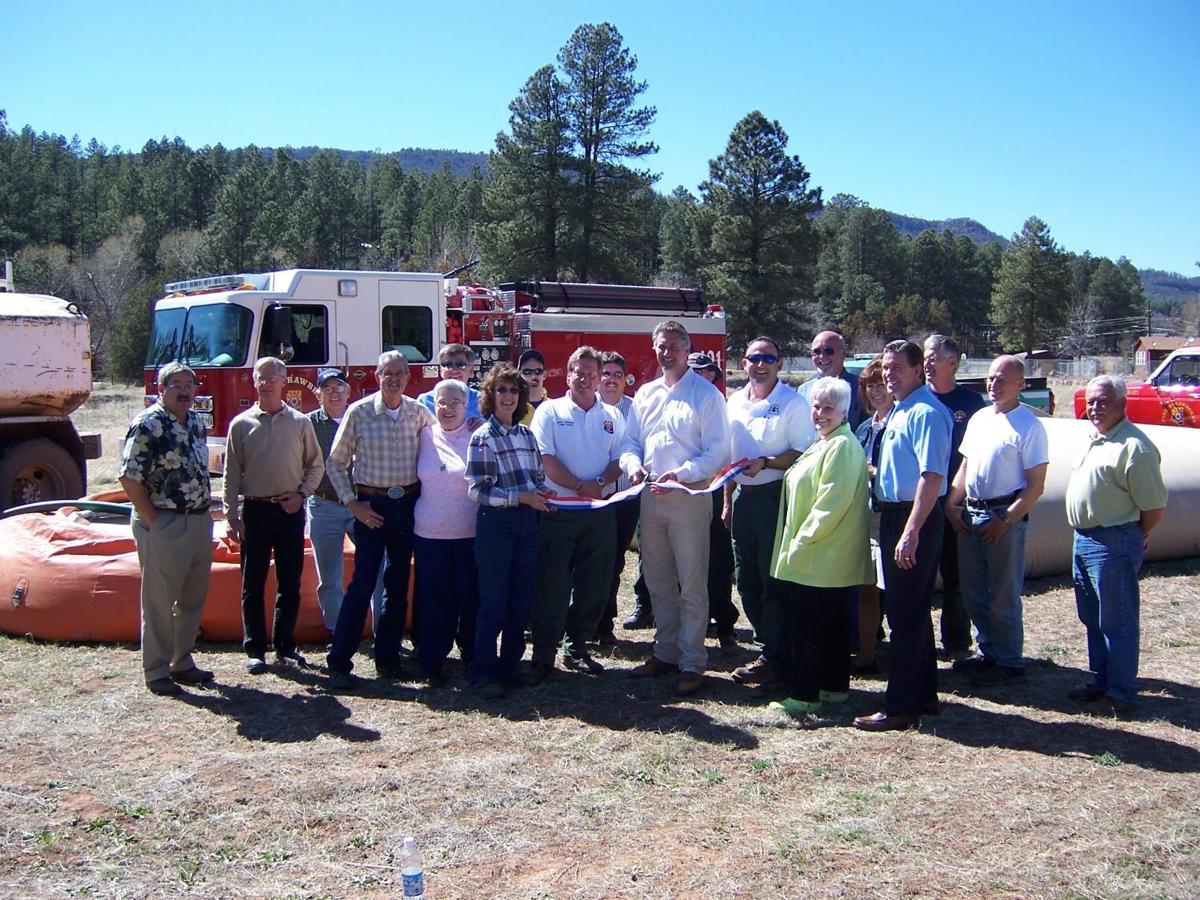 Tommie Martin and other dignitaries in 2006, placing the original Round Valley bladder. Vandals slashed this bladder and have put the whole county solution to finding water sources in remote areas at risk. 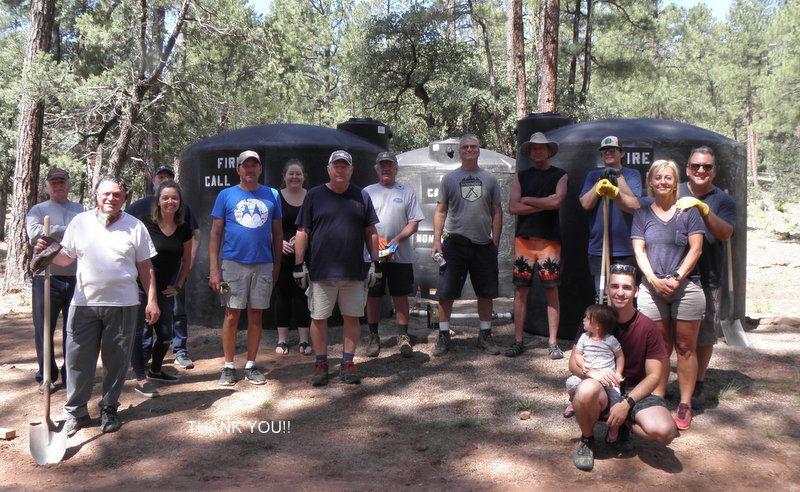 When the bladder tank near the Thompson Draw I subdivision failed, residents came together through their HOA and purchased three 2,500 gallon plastic water tanks to replace the bladder. They plumed them all together to make one large water supply that should last for decades.

The Thompson Draw II community had never had a bladder tank at their community, so they pioneered the plastic tank method. It was their design that the community of Thompson Draw I used as a template.

"As surplus bladder tanks are becoming harder to find, efforts like the one at Thompson Draw I may be the model for rural subdivisions," said John Wisner, fire chief for the Hellsgate Fire Department.

Vandals slashed two water bladders in Round Valley at the end of September, potentially slowing the response to fires in one of the longest fire seasons ever.

The Army surplus bladders give fire trucks and helicopters a source of water in remote areas, making it possible to douse a fire when it’s small.

For more than a decade, Gila County District 1 Supervisor Tommie Martin has overseen development of the network of 20,000-gallon bladders. Geronimo Estates, Round Valley and other communities rely on these bladders to douse a fire quickly.

Now, the county’s struggling to maintain the network.

“We have had the two bladders at Round Valley sliced — after all these years of nobody bothering any of them,” said Martin. “When we replace them, we will be out of bladders and then I don’t know what we do next.”

Gila County has used the military surplus bladder system since 2006. But those bladders came from the early 1990 Desert Storm era. The military stopped making these bladders and no longer has any for sale. The county and its partners in wildfire management have known of the bladder crisis for years, but the Round Valley vandalism pushed up the timetable to find a solution.

Jeremy Plain, acting deputy fire staff for the Tonto National Forest, has relied on these bladders to get through many fire seasons. In his experience, this is a unique program.

“I do not know of any other counties doing anything like this, which makes our program very cool, and kudos to Tommie for pushing this and making this happen years ago,” he said.

“This system has proven very useful in shortening the time a helicopter with firefighting bucket has to travel to find water,” said John Wisner, fire chief for the Hellsgate Fire Department.

“Similarly, water tenders can and have used close-by bladder tanks to refill and return to structure fires and thus shorten turnaround times,” he said.

Otherwise, said Gary Morris, fire chief for the Pine-Strawberry Fire District, firefighters would have to drive to a community, find a fire hydrant, fill up and return to the fire.

“It takes 10 minutes or so to fill up a tanker and get back on the road,” precious minutes that make or break a fire.

“The bladders are very important, particularly on the front end,” said Morris. “That initial front-end attack is critical, you either make it or break it.”

In fact, “the bladders in Round Valley were essential in our efforts to control the Oxbow Fire earlier this year,” said Payson’s Fire Chief David Staub.

Plain said the red flag conditions made every minute of fighting the Oxbow Fire count.

“We were able to suppress that fire at 6 acres with the use of our local Type 3 helicopter and a Severity Type 2 helicopter that was staged at the Payson airport,” he said. “Turnaround times were about 1 1/2 minutes between drops. Those helicopter drops helped our firefighters on the ground catch that fire before it threatened those communities.”

Which just proves “they are absolutely necessary to protecting the communities within the Tonto National Forest,” said Staub.

All the fire officials have concerns over the threats to the program. Martin shares their concern.

“Each year since (2006), Gila County has had over 100 fire starts per fire season. With the exception of the 2009 Waterwheel Fire that burned 800 acres and the 2012 Poco Fire that burned 12,000 acres, all fires have been held to 15 acres or less, unlike neighboring counties,” said Martin.

Wisner said Thompson Draw, a community in the Hellsgate service area, took the matter into their own hands by purchasing three 2,500-gallon plastic water tanks, then plumbing them together to make a 7,500-gallon water supply.

“As surplus bladder tanks are becoming harder to find, efforts like the one at Thompson Draw may be the model for rural subdivisions,” he said.

A helicopter refilling from a bladder and tank sytem

Two Gila County water trucks fill the bladder while a helicopter re-fills its water tanks from the system designed to provide water to remote areas.