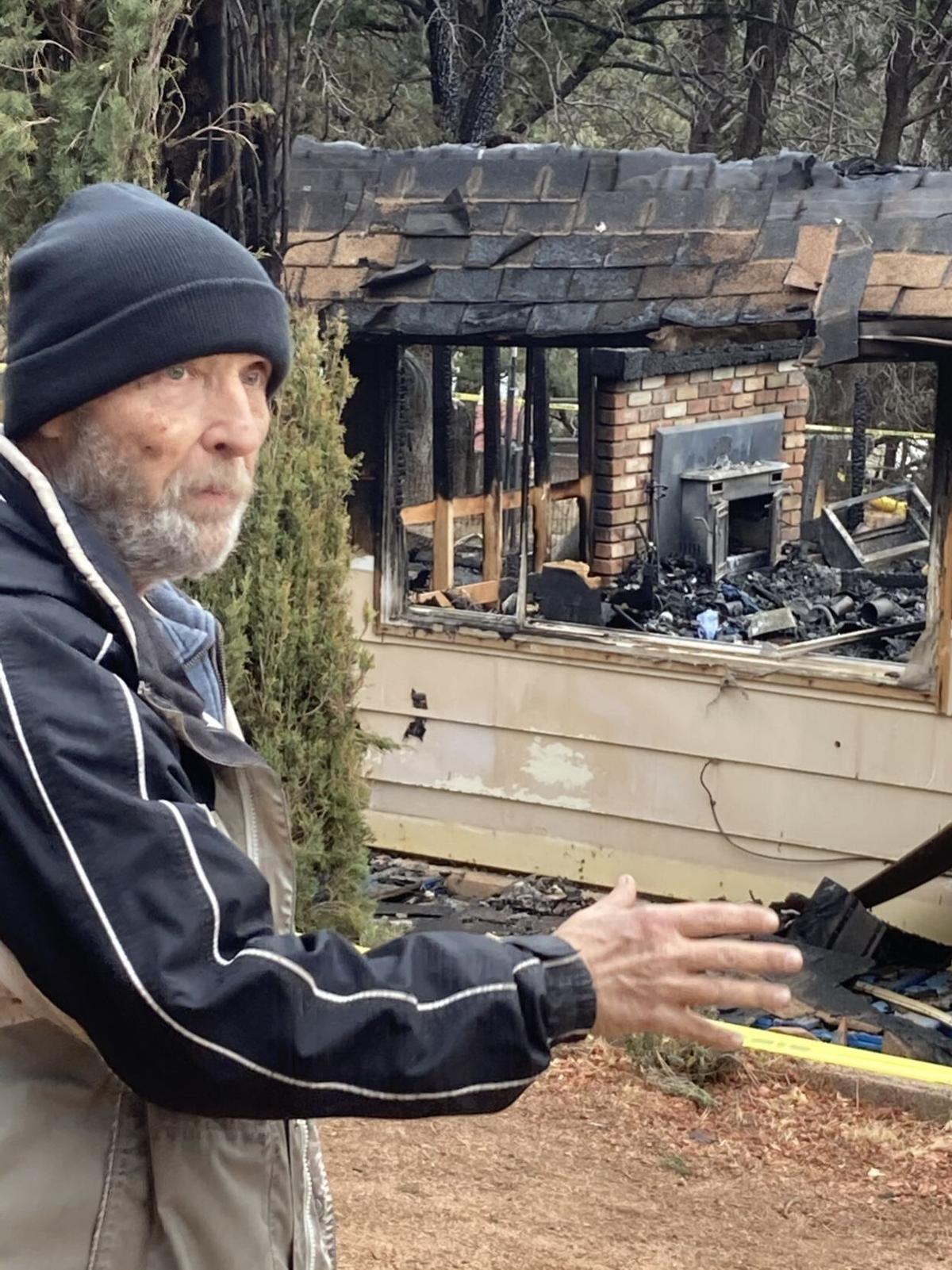 Sam Scott describes escaping the fire, thanks to his son, Andy. The fireplace, the doors in the open position as found by firefighters, looms in the background. 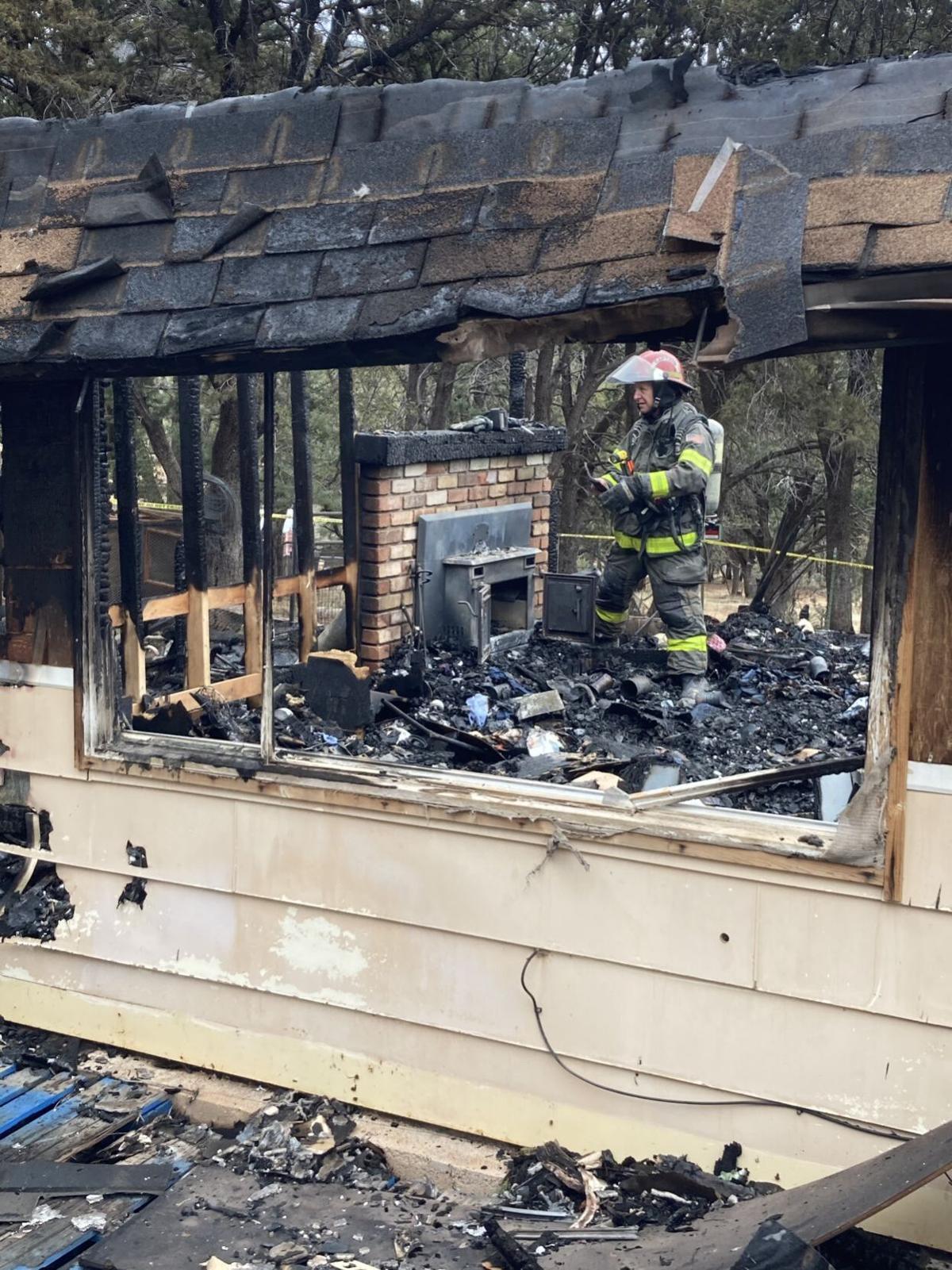 Pine-Strawberry Fire Capt. Paul Voakes takes pictures of the fireplace at the site of the fire in Pine Wednesday.

Sam Scott describes escaping the fire, thanks to his son, Andy. The fireplace, the doors in the open position as found by firefighters, looms in the background.

Pine-Strawberry Fire Capt. Paul Voakes takes pictures of the fireplace at the site of the fire in Pine Wednesday.

As 2020 ended, a tragedy befell the Scott family in Pine. Their home, on Pine Creek Canyon Road, burned to ashes Wednesday morning.

Sam Scott said he awoke to his son Andy yelling that smoke was filling the house. Sam recounted the experience while surveying the wreckage on Thursday. His wife, Tracy, was out-of-town visiting their children and grandchildren. On Christmas Eve Sam and Andy had met a couple, Jimmy and Monica, who needed a place to stay. They invited them to stay at their home, Sam said.

In the early morning hours, Sam said that his guest built a much too large fire in the fireplace, the home’s primary source of heat. The fireplace doors were left open, according to Pine-Strawberry Fire Department (PSFD) investigators.

Sam, Andy and their guests fled the burning home as Andy reported to his dad that the roof was already on fire on the north end of the home.

“I had already called it a working fire, seeing what I had when I got there I saw this could be extra hazardous for us,” said Voakes. “Not risking firefighter lives to get inside this house.”

Dispatch let firefighters know that all residents were out.

Firefighters attacked the flames showing on the outside, working to keep it from spreading to other structures both on and off the property.

“There was ground fire and smoldering trees. We knocked that out pretty quick,” Voakes said. This kept the fire within the original structure, and away from neighboring properties. With dryer than normal conditions and located inside the confines of Pine Creek Canyon, everyone was concerned about the fire spreading, he added.

About 20 minutes into fighting the fire, Payson Fire Department arrived to provide mutual aid and take over incident command.

“That allowed us to get to work, there were a lot of moving parts,” said Voakes.

As well as eight PSFD personnel, two water tenders and two engines, Payson brought two engines and a water tender. Hellsgate brought an engine and Whispering Pines brought a water tender, as well as more personnel allowing a team approach and an ability for firefighters to rotate during the hours of duty.

About 10 a.m., crews had the fire under control and completed overhaul around 1:20 p.m.

PSFD Fire Marshal Mike Reichling then began his investigation as to the cause.

Based on the homeowner’s account, the visibly destroyed chimney and the area of origin, Reichling determined sparks had escaped through the open doors of the fireplace.

Reichling said it is very likely that the fireplace was installed after that, and was not up to today’s code, but likely installed before those codes existed.

“We have a lot of that up here,” Reichling said.

Hoping this serves as a cautionary tale, Reichling said homeowners that live in an older home are encouraged to have a contractor inspect their fireplace for safety reasons.

Having your fireplace inspected for safety, cleaning your chimney before fall, burning fires properly and disposing of ashes in metal containers are just a part of fireplace safety, said Reichling.

The guests, Monica and Jimmy, no last names available, left the area, Sam said. They took the family dog, Marie, a white lab. He is hopeful they will return the dog.

The Scott family did not have homeowner’s insurance. The Red Cross offered them immediate assistance, but they will need help to rebuild. If you would like to help, find Tracy Scott on Facebook.