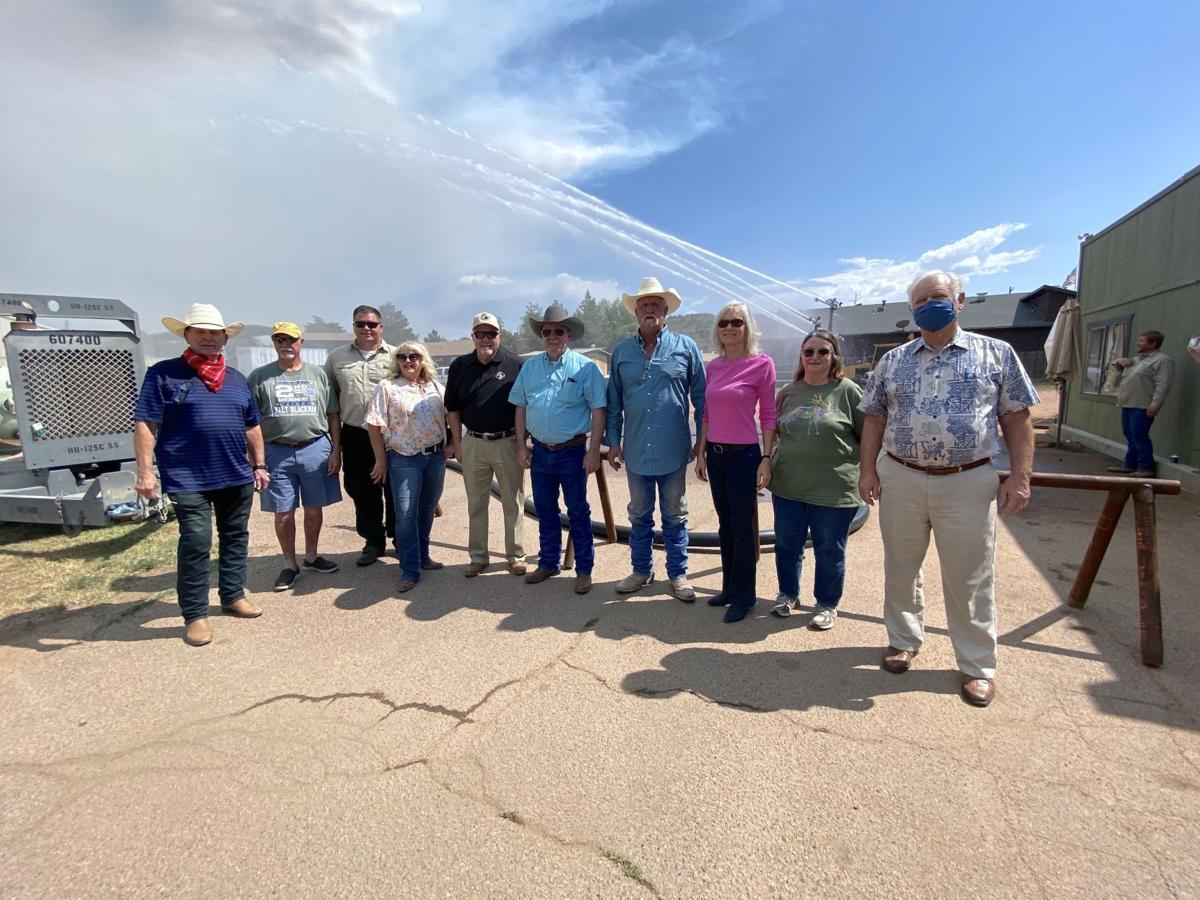 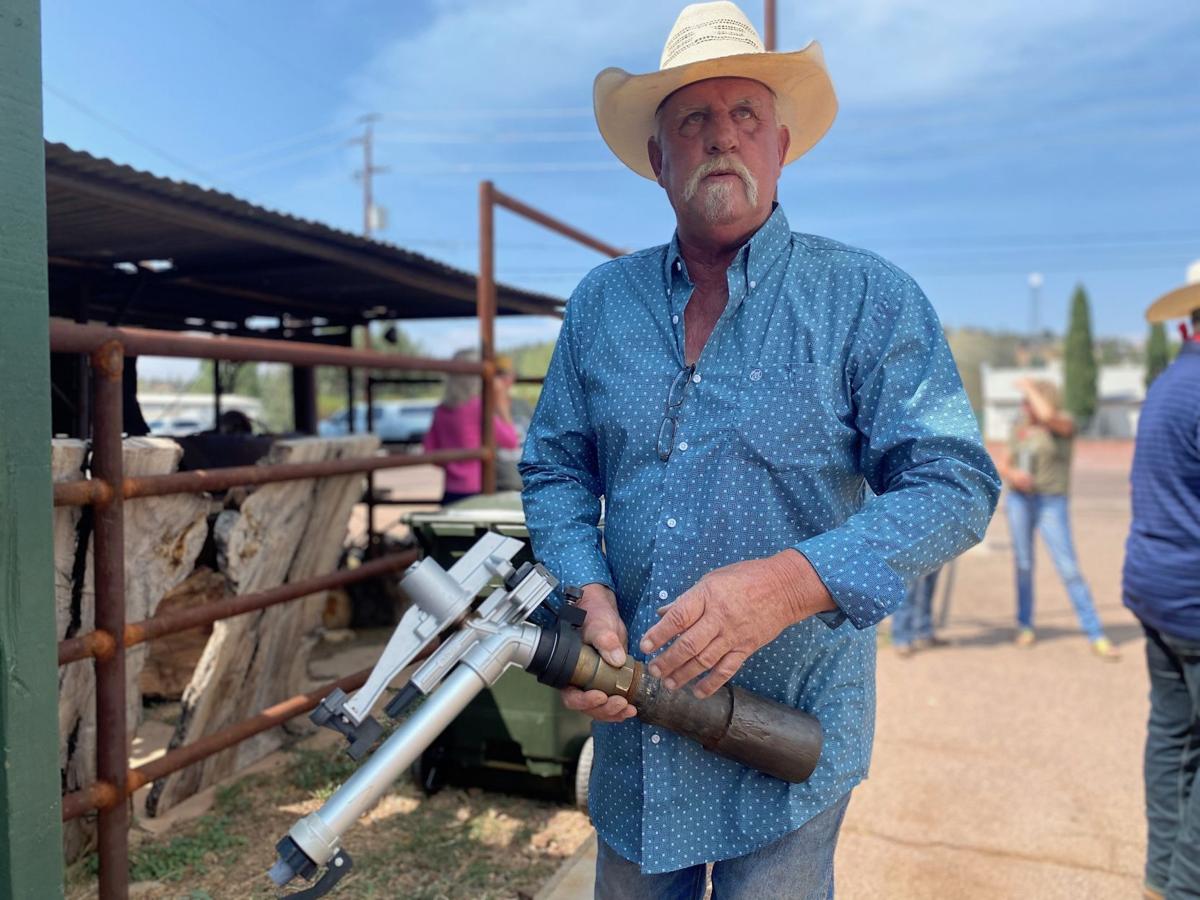 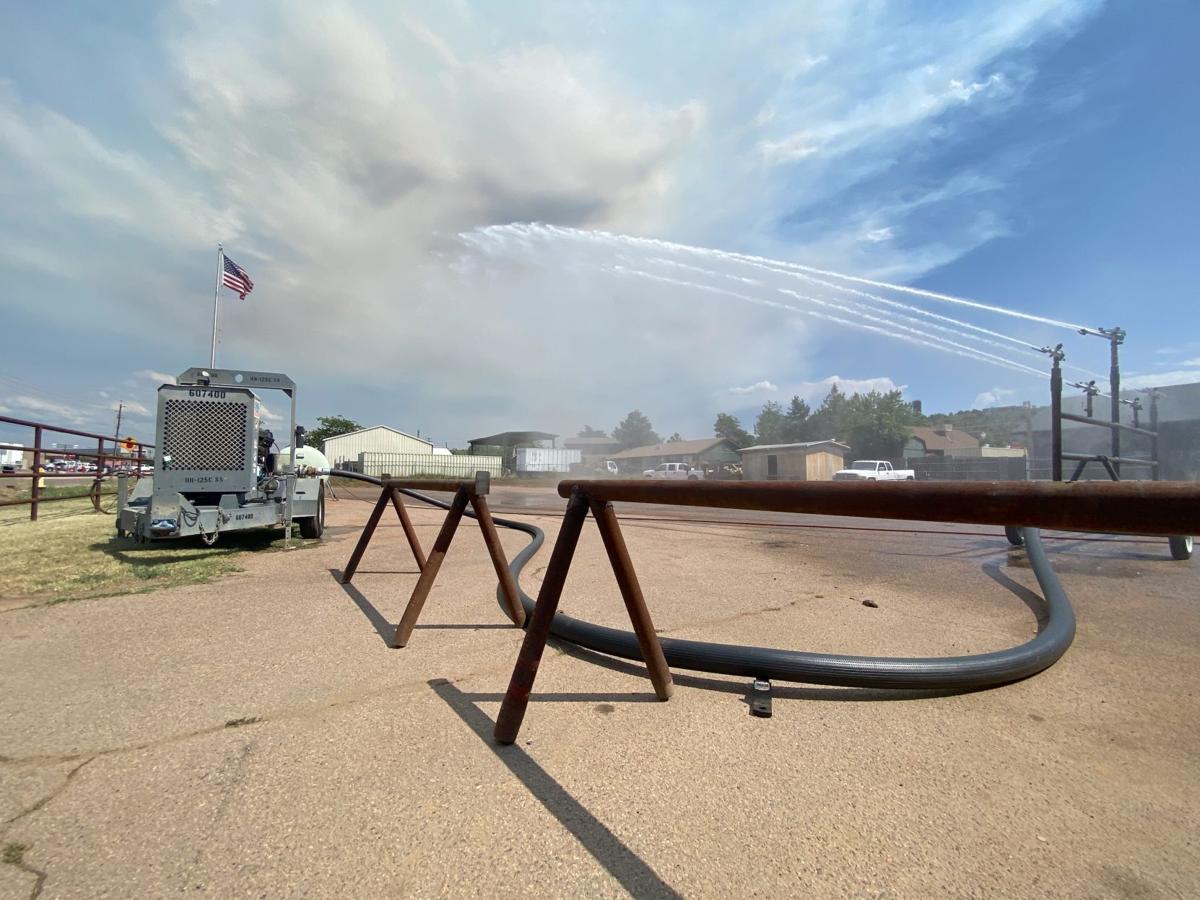 The pump and generator for this demonstration produced a water stream that covered the parking lot.

Assuming Payson doesn’t drive him out of town.

For years, Humm watched wildfires consume homes on TV — sometimes despite homeowners’ futile attempts to water down their roofs with a garden hose.

“The whole west was burning up — no one was building anything to protect your home or livestock or property,” said Humm. A welder by trade, he created an automatic water and/or foam system so powerful it could save a home even after the owner evacuated.

Humm’s system has already caught the attention of the Forest Service, Congressman Paul Gosar, other states, Gila County and the Town of Payson.

“You know a lot of people are concerned with the thought of being burned out these days,” said Woody Cline, District 3 Gila County supervisor.

“At this critical time, a viable fire suppression system exists in the heart of Arizona,” said Payson’s Mayor Tom Morrissey. “It is powerful, effective, a new way of fighting fires and I saw it with my own eyes. It’s called Pipeworks!”

Once the system was turned on, water coursed from a 2,000-gallon tank through the pipes and up through the sprinklers, drenching the empty lot. Paciorek noted Humm’s system is more robust than the portable sprinkler systems Forest Service firefighters use to protect communities currently.

“As a supervisor, I like the idea of manufacturing and using a product locally that could benefit a lot of people. The more chances we have to save life and property, the better off we are,” said Cline.

Except Humm might have to pack up and move soon to another state, after a frustrating effort to satisfy Payson building code requirements more than three years after he set up operations — and invested $100,000.

“The governor of South Dakota wants to meet with me,” he said of one of his options. The government there would like to protect the Black Hills by building Humm’s system around the park, a national treasure, he said. The state has offered to help him set up shop.

The problem stems from the months of back and forth between Humm and the Town of Payson on zoning. The battle has delayed his ability to launch his business.

Humm’s rented property lies between Highway 87 and McLane on Aero Drive. His fire suppression system runs along the edge of the large dirt lot, a demonstration system he uses as a marketing tool. The property also has a building with utilities.

“It was just a cute little lot with a good yard to build stuff,” he said of his choice to rent the space.

Yet no one warned him before he rented the property that it lies within the town’s redevelopment zone. Although surrounded by grandfathered-in manufacturing businesses, Payson hopes to eventually upgrade the area. That means hiding the equipment and supplies from the street view with block walls.

The owner hasn’t put up a block wall — and as the renter, Humm says he can’t afford it. Moreover, town staff have also asked Humm to submit engineered plans to build a warehouse to hide the supplies he uses to build his patented fire suppression systems. Humm’s unique fire protection system uses feet and up to miles of pipe and the equipment to put it altogether, not stuff the town codes would like seen from the street.

The systems, however, could solve a problem, protect homes and wildland firefighter lives in wildfire country.

“My fire suppression system withstands extremely high pressures and the durable fittings do not break due to weather fluctuations,” said Humm.

Town staff say Humm must follow the zoning ordinance, which added many new requirements not a part of the original development of the property.

“One thing the Town and/or town staff cannot do is not follow adopted zoning provisions,” she said in an email.

But DeSchaaf said Humm has some options. He could apply for a code amendment to change zoning standards by “initiating a zoning application if there are requirements that they feel should be changed.”

He could also seek a variance. That would require a hearing “so that other affected parties (neighboring property owners, community organizations, residents and businesses) have the opportunity to weigh in on the proposed changes or exceptions,” said DeSchaaf.

Finally, the property owner could seek a zone change.

Right now, Humm’s stuck with a “chicken and egg” quandary posing the question: Which comes first, new businesses or the redevelopment upgrade?