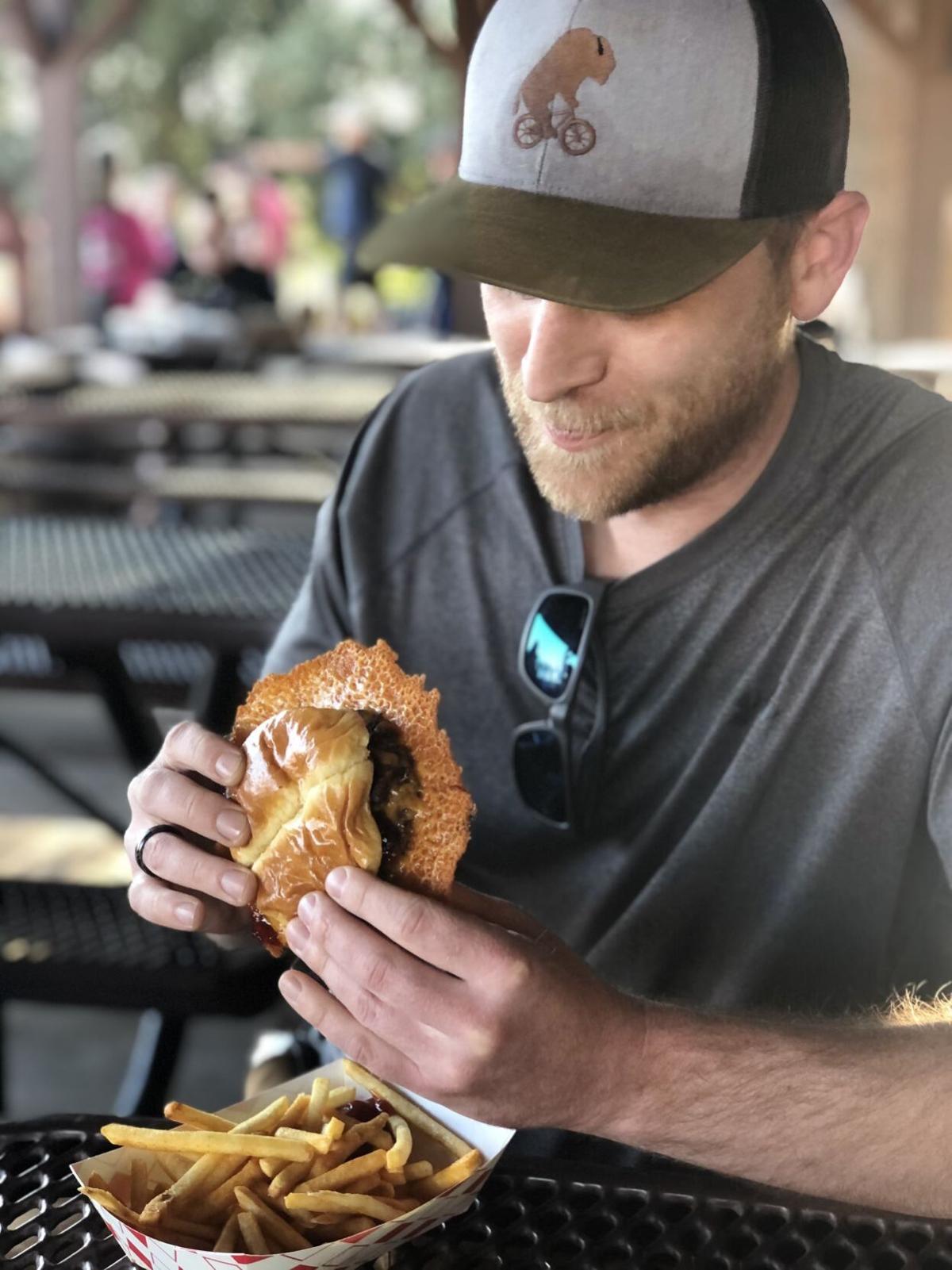 A diner enjoys a peanut butter and jail-ly hamburger from the Patty Wagon. 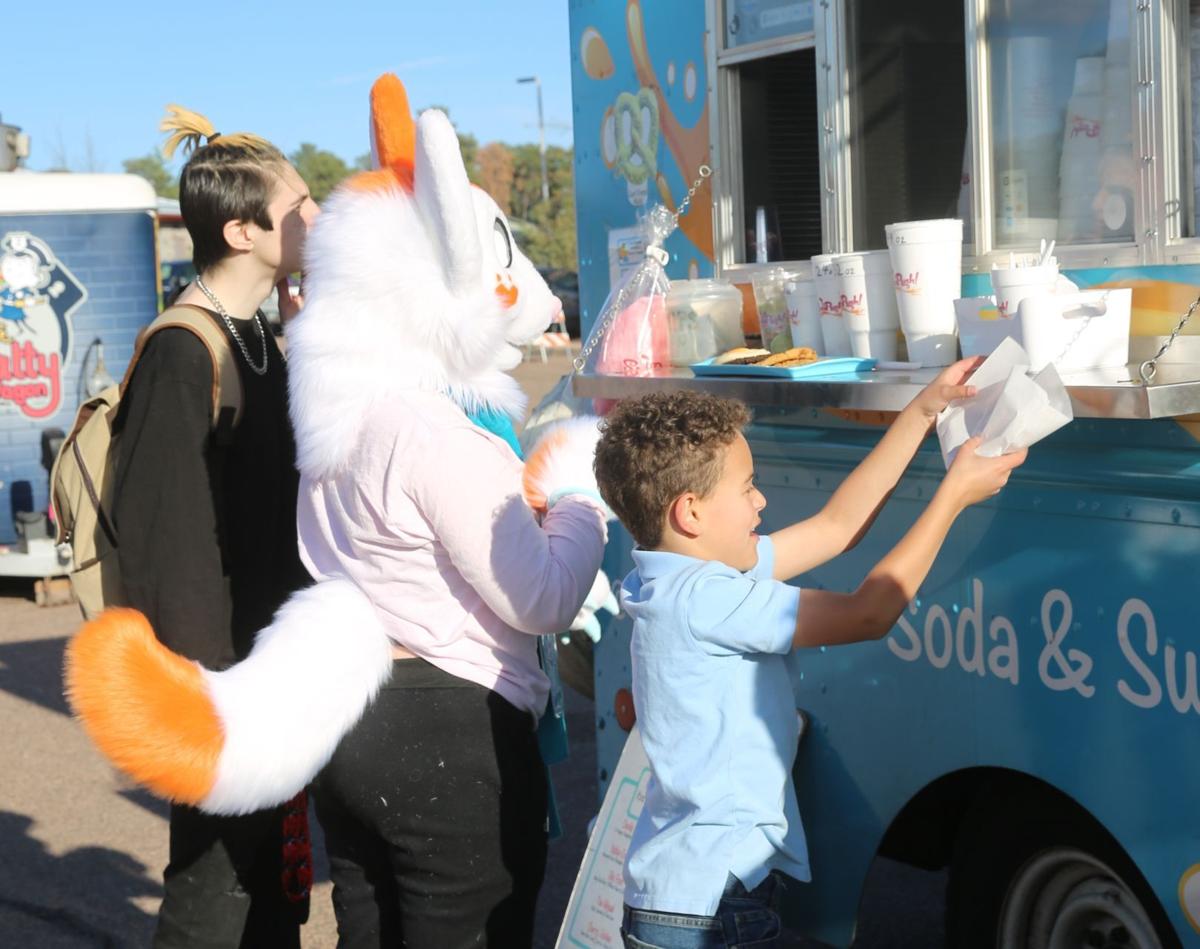 Some dressed up for the Pop-Up Food Truck Court at Rumsey Park Friday night. 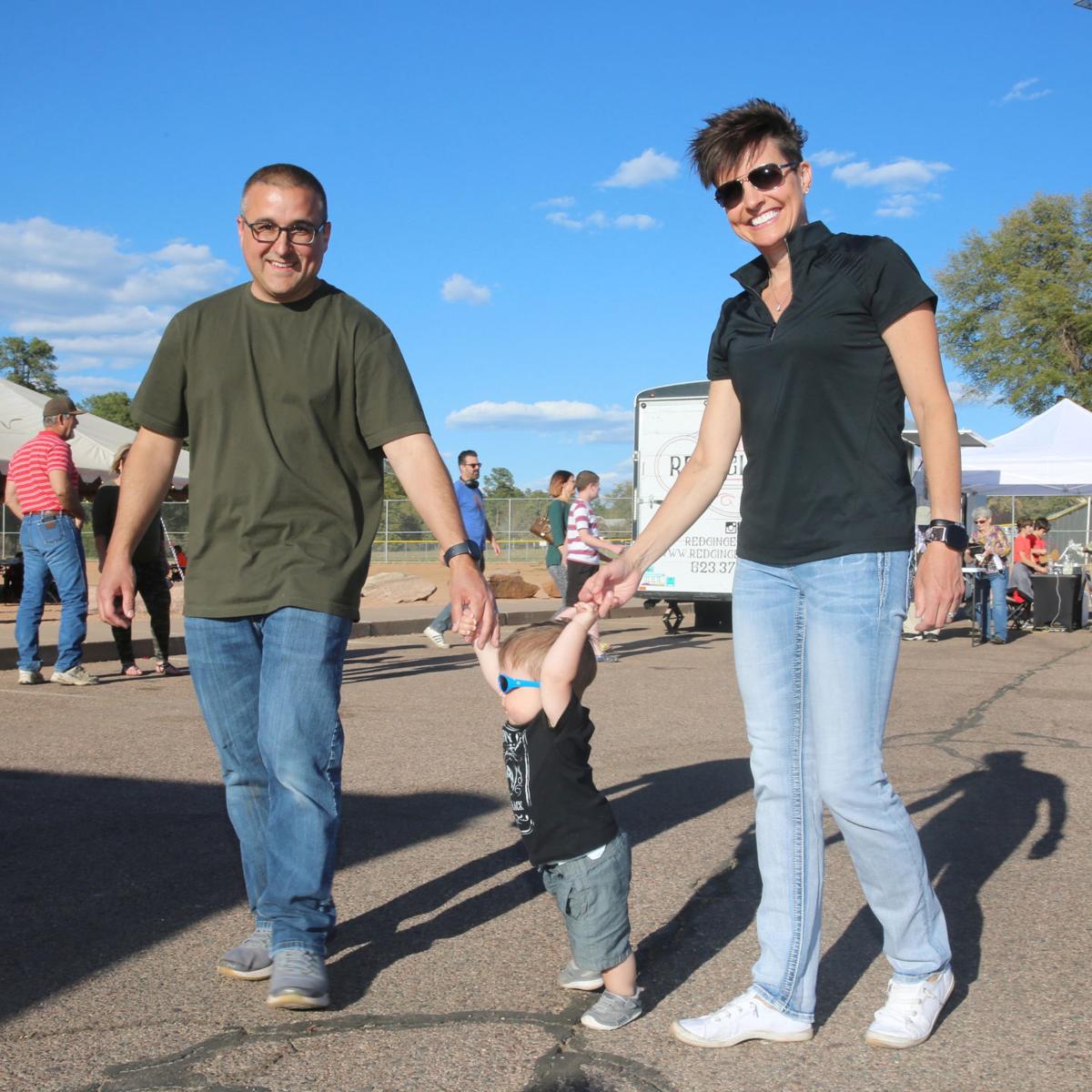 Mair Crespin and her husband Matt brought their son to the food truck event.

A diner enjoys a peanut butter and jail-ly hamburger from the Patty Wagon.

Some dressed up for the Pop-Up Food Truck Court at Rumsey Park Friday night.

Mair Crespin and her husband Matt brought their son to the food truck event.

It may have been much smaller than prior food truck festivals, but last weekend’s Pop-Up Food Truck Court at Rumsey Park was no less tasty.

Eight food trucks took part in the event, spaced out in the parking lot west of the library, giving diners plenty of room to mill around and eat.

It was the first time the town has used Rumsey to host the event. They held prior events at Green Valley Park.

Diners said they appreciated the new location since it offered more seating with several ramadas nearby. Seating has always been limited at the Green Valley events, and most people had to bring their own seats or stand and eat.

Dozens of people were seen milling about the event Friday night when it kicked off at 4 p.m. The crowds only grew in size Saturday as the event ran from 11 a.m. to 7 p.m.

Among the food trucks was the Patty Wagon, which offered a variety of hamburger creations. Among them were the peanut butter and jail-ly, which had fried cheese, bacon, caramelized onions, peanut butter and strawberry jelly all on a burger patty.

The Soda Rush! truck had soda pop drinks, cookies and Dole Whip pineapple soft serve, just like that you can find at Disney. There was also a barbecue truck; Red Ginger, which served Asian dishes, like Filipino noodles; a cheesesteak truck and an ice cream stand.

“I got to the event late and didn’t think there would be much food left. The brisket and ribs filled the to-go container so full I couldn’t shut it. It was delicious,” said Jacob Chamberlin.

Stan Garner said a friend went to the event for lunch and told him the barbecue truck was good.

“Rim Country BBQ has me hooked, so I opted for the Philly cheesesteak,” he said. “The Philly sounded good, and it was. I was hoping the lobster truck would be there, but it wasn’t, bummer.”

The town hosted its first food truck event in 2017. That initial event had 15 trucks, a beer garden and bounce houses.

Courtney Spawn-Kort, the town’s Parks, Recreation and Tourism director, and Kaprice Bachtell, the town’s special events coordinator, came up with a plan to scale down the August event last year to assure it could take place. But that was just part of the plan. They then added the Pop-Up Food Truck Food Court at Rumsey Park.

“During 2020, we did not have the ability to host one large food truck festival due to the pandemic,” said Spawn-Kort. “Instead of canceling and not offering this type of event that people look forward to on a yearly basis, we broke up the one large festival into two smaller events. This pop-up food court type of event will also provide for a new venue in Rumsey Park.”