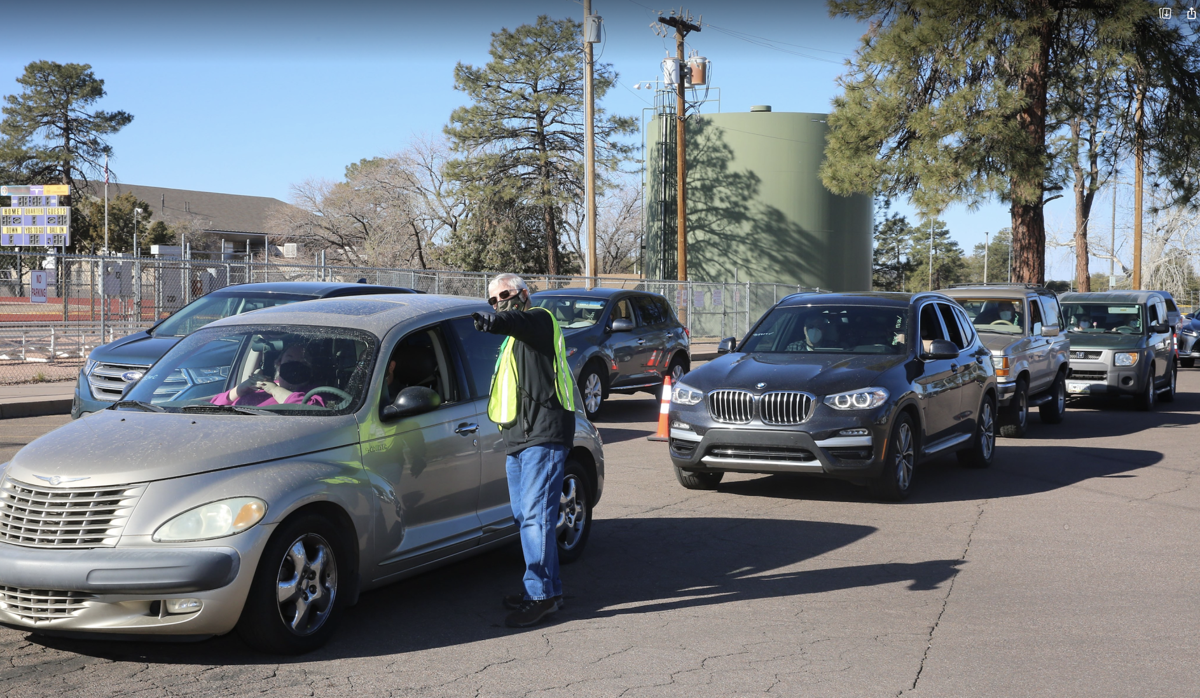 Almost 2,000 patients received vaccines during the Payson Feb. 27-28 clinic at the Payson High School parking lot. The rollout in Gila County is one of the first in the nation to provide vaccines to the general public. Although the county has no more mass clinics scheduled for first shots, they will continue drive-thru clinics for second shots. 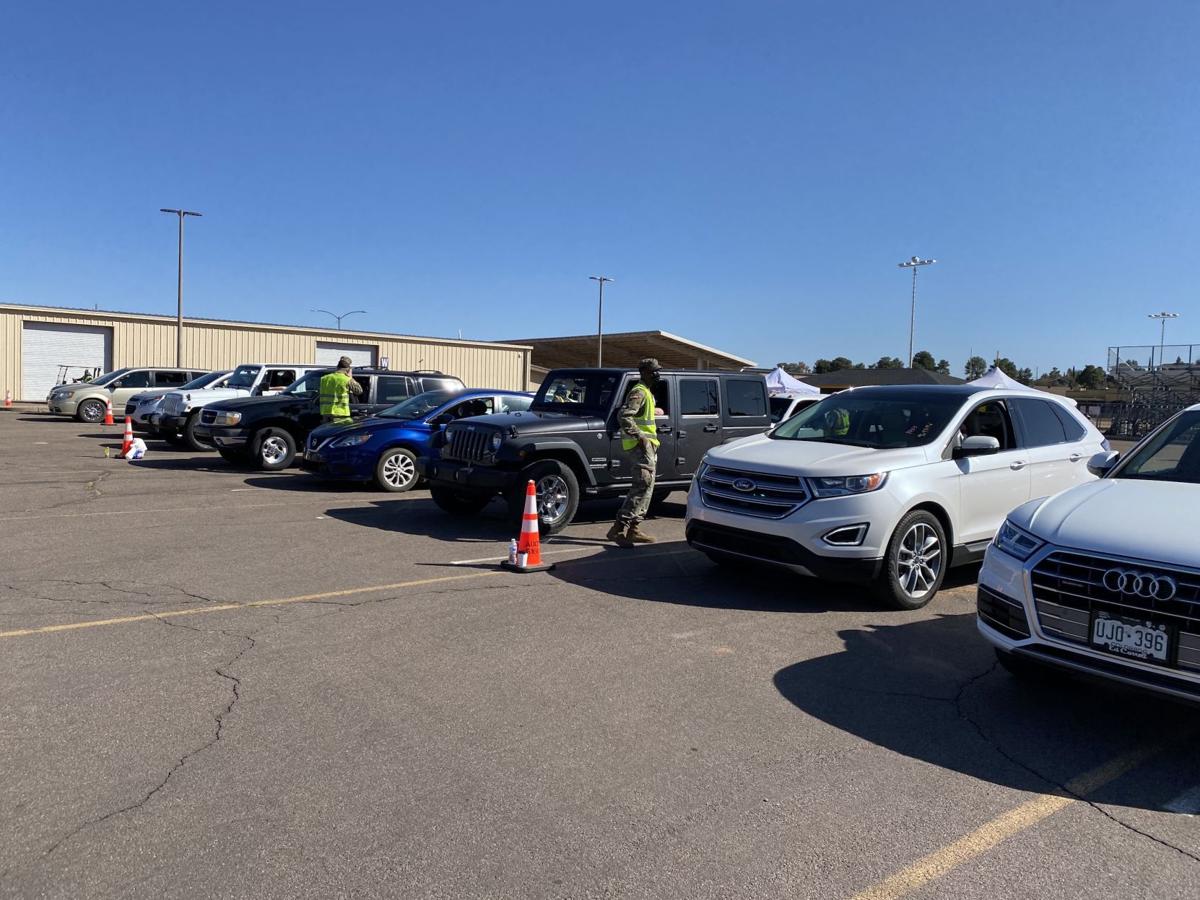 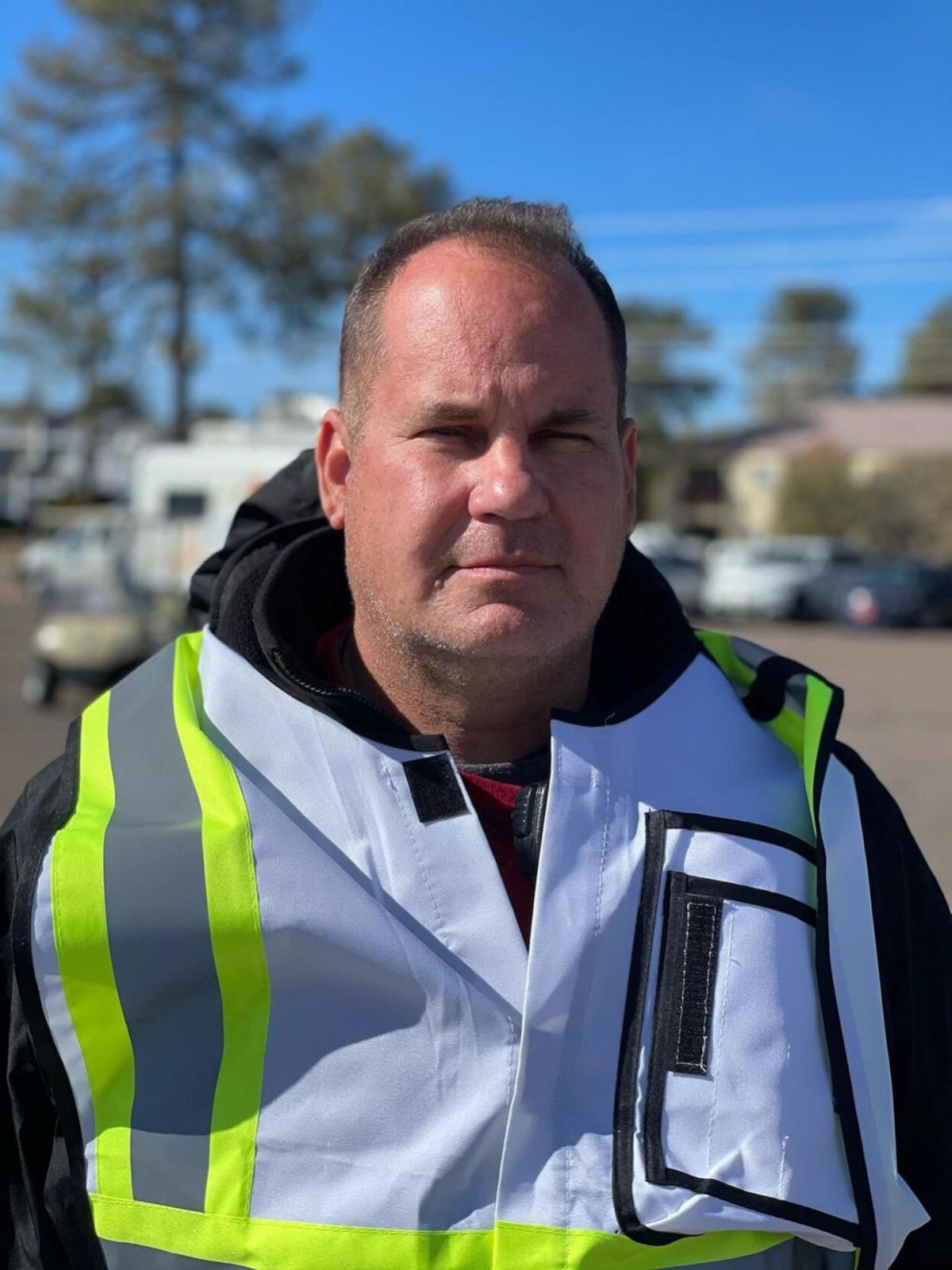 Todd Whitney of Command Solutions 4. His company has eased the flow of vaccines and appointments to help Gila County offer vaccines to the general public before any other county in Arizona. 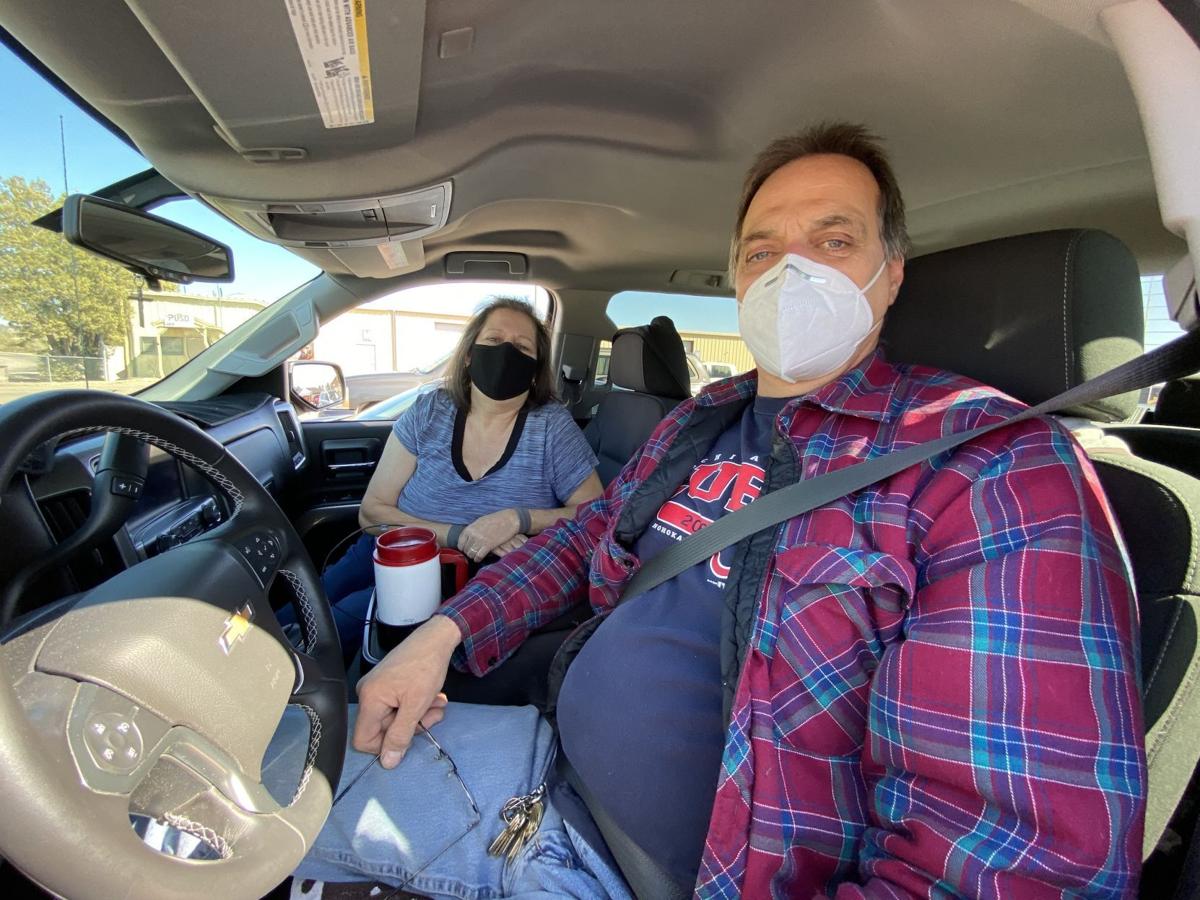 Mary Jean and Rich Horna wait after Mary Jean received her first shot Saturday. Rich works with first responders, so he already has both shots. 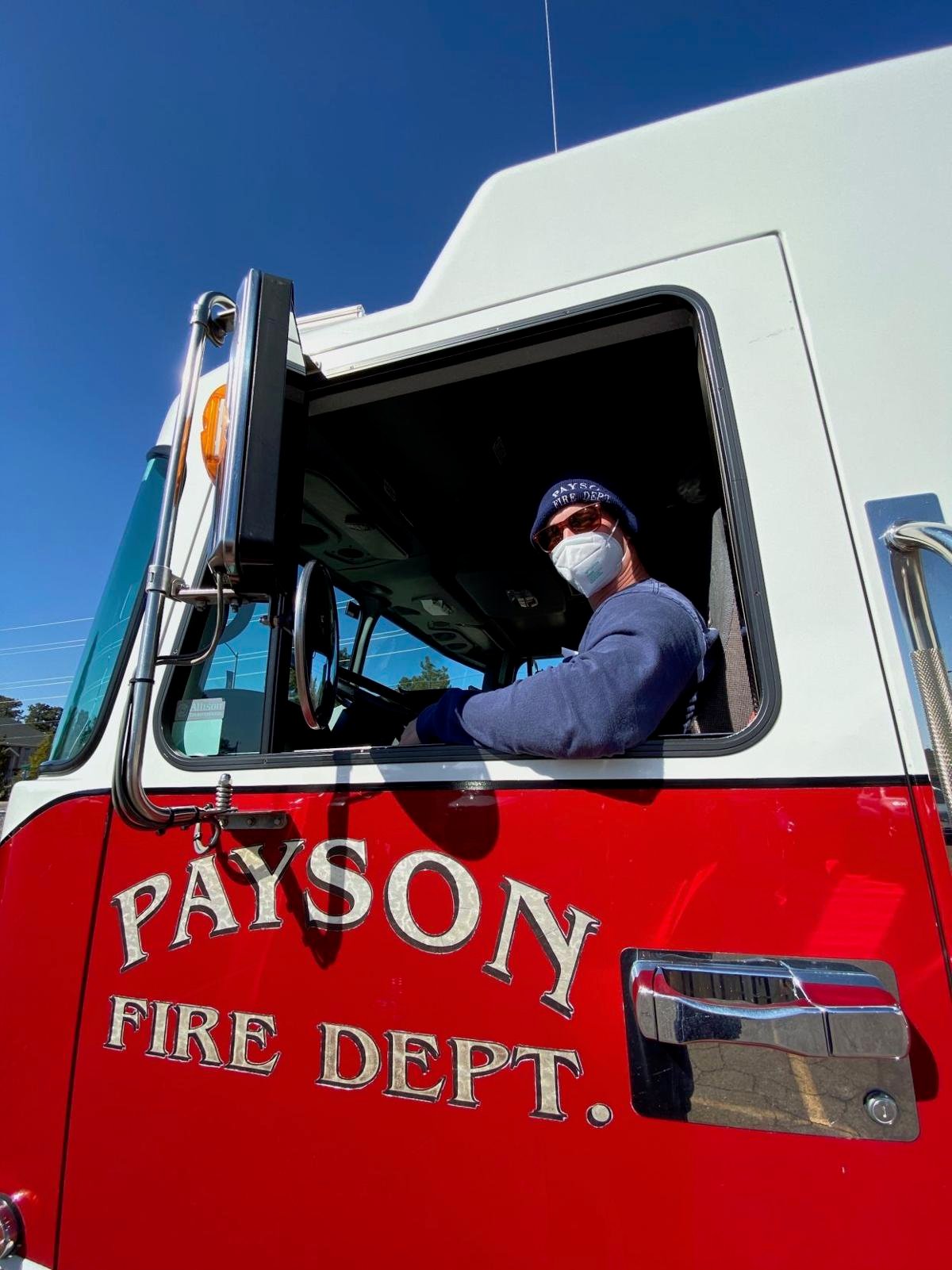 A Payson Fire Department paramedic waits to help those who might need help after receiving their shot at the Feb. 27 - 28 vaccination clinic in Payson. Gila County still has first shots available through local providers. 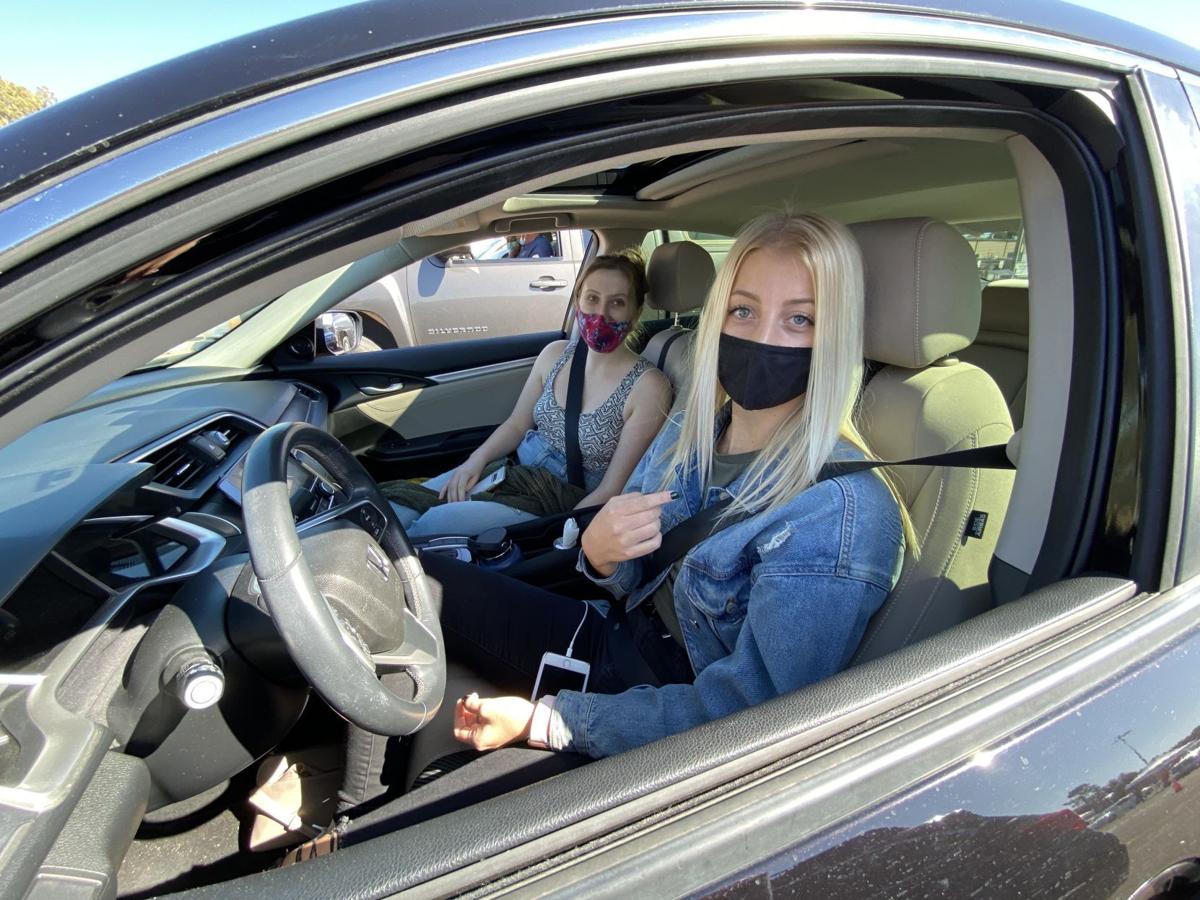 Lindsey Wala (left) a Payson High School graduate and her best friend Maddie Beier have not seen each other for two years because of the pandemic. Wala’s family flew her out from Czechoslovakia to receive the shot.

Almost 2,000 patients received vaccines during the Payson Feb. 27-28 clinic at the Payson High School parking lot. The rollout in Gila County is one of the first in the nation to provide vaccines to the general public. Although the county has no more mass clinics scheduled for first shots, they will continue drive-thru clinics for second shots.

Rich Horna watched over his wife Mary Jean as they waited to see if she would have a reaction to the Moderna vaccine during the Feb. 27 vaccine clinic in Payson.

Waiting in their pickup truck, the 50-something couple were more than happy to talk about why they did what they could to get a shot.

The couple live and work in Phoenix but have owned a cabin in Pine for decades.

Rich already has both his shots because he works with first responders in the Valley, but the couple faced nothing but frustration in trying to get a shot for his wife, who has been caring for sick family members despite the risk and anxiety.

Again, and again, Maricopa County told her, “We’ll let you know” when she could make an appointment as part of the general population risk group.

So, they were overjoyed when they discovered through Everbridge and the Payson Roundup that Mary Jean qualified for a shot here, with Gila County first in the state and possibly the country to open appointments to the general population. The county still has shots available through local providers.

But Gila County has set a blistering pace for vaccinations, thanks to broad public support, the work of volunteers and the efforts of health partners like Banner, the MHA Foundation, Cobre Valley Medical and others. The health department team has garnered national attention for its work and will now help other counties in the state with their appointment and vaccination processes.

This good news brought out young and old for the weekend of Feb. 27-28 to open up a new front against the virus that has besieged the nation for a year. Each person who received a shot contributed to the ultimate victory — herd immunity. That comes when about 80% of the population either has a shot or has recovered from an infection. Only then can the world return to near normal, without the risk of suffering yet another deadly pandemic spike.

As of early this week, at least 24% of Arizona residents have gotten at least one shot and another 11% have recovered from an infection — which means nearly a third of residents have at least partial protection.

Most counties are still trying to work through the high-risk groups, like those over 65 and front-line, essential workers. But Gila County has moved on to the general public through partnerships and help from contractors.

As a result, the Saturday event in the Payson High School football field parking lot had a festive air, with laughter floating across the parking lot from 9 a.m. until 6 p.m.

“I have my 90-year-old parents in Scottsdale I care for,” she said of her urgency to get protection. “In April I have to travel to take care (of an elderly relative) after surgery.”

She figured she’d just wait. But Gila County made it so easy for her to sign up — and a Roundup article provided a phone number and advice.

“The article gave me perfect directions,” she said. “If I reached a message that this phone has been disconnected, hang up and try again. The last time I called, someone picked up. She was an exceptionally sweet girl.”

The Hornas praised the event for the ease with which the check-in, vaccination and wait period flowed.

“Everyone was so friendly,” said Mary Jean.

Gila County hired Whitney and his company Command Solutions 4 as a consultant to ensure a smooth rollout of the vaccine. He honed a system of traffic flow through the two Payson High School parking lots. The planning ensured the average person got through the line in 23 minutes, which included a 15-minute wait at the end to guarantee a 3 in 1 million inflammatory response didn’t kick in before people headed home.

“That’s a good number to report,” said Whitney of the flow.

The Moderna vaccine prevents the development of symptoms in 95% of those exposed to the virus. About one-third of people who receive the shot report short-term reactions like a sore arm, headache, fatigue or fever. Hardly any report more serious symptoms and no deaths or long-term side effects have been documented in some 45 million doses nationwide.

The staff from Gila County joined forces with the National Guard, Payson Fire Department paramedics, and local volunteers with the Citizens Emergency Response Team to guide with military precision 1,900 patients in their cars through the vaccination and monitoring period over two days.

The good news about an open vaccination clinic even reached a Gila County resident studying abroad.

Lindsey Wala graduated from PHS in 2017. She’s been enrolled at a Czechoslovakia university since graduation from Payson High School. The pandemic has kept her from traveling home for two years, but the chance to get a shot got her on a plane.

The European Union has suffered a poor rollout of the vaccine. After Wala’s mother, Laurel, read about vaccine manufacturing delays in Czechoslovakia, she convinced her daughter to make a trip home.

“The Czech government has been asking other countries to send them any vaccine doses for which they do not have immediate use,” said Laurel. “Lindsey and Vikram (her boyfriend) are very pessimistic about being able to get vaccinated in the Czech Republic before fall or even later.”

The U.S. struggled with the pandemic, accounting for about 40% of the confirmed cases worldwide, with just 5% of the world’s population. But when it comes to getting vaccinated, the U.S. has excelled. That’s partly because the federal government invested billions in vaccine development, in return for a call on the first vaccines manufactured.

When Laurel heard Lindsey could get a shot, she bought a ticket, despite concerns.

“We had not really thought about bringing Lindsey home during the pandemic because she is in her final year of university and we were concerned that if she left the Czech Republic, she might not be allowed to return,” said Laurel.

She said the extra week it took for Gila County to get all its vaccines due to a big winter storm gave the family enough time to bring home Lindsey — and to surprise her best friend Maddie Beier.

The two young women have been best friends throughout the years they grew up in Payson. However, Beier didn’t even initially recognize the heavily masked Lindsey.

They drove together to get their shots, eager to escape from the anxiety-producing front lines of the global war with an insidious virus.

They look forward to the day masks no longer block their smiles. But masks didn’t muffle their laughter as they chatted during the 15-minute wait after Lindsey’s shot. Beier looked forward to getting her shot the next day.

Both beamed with hope — along with Mary Jean, knowing she could tend to her friends and family without fear of passing along the deadly virus.

At this time, Gila County has no further mass vaccination clinics scheduled for first shots.

For those in Gila County seeking their first shot please go to the follow providers.

Currently, their clinic is booked out until the end of February and more appointments will become available soon for the first week of March.

We welcome our newest provider in the Payson region who has agreed to assist the residents who are 65 and older searching for vaccine registration.

For any other questions regarding the COVID-19 vaccine please call one of the following call center numbers: