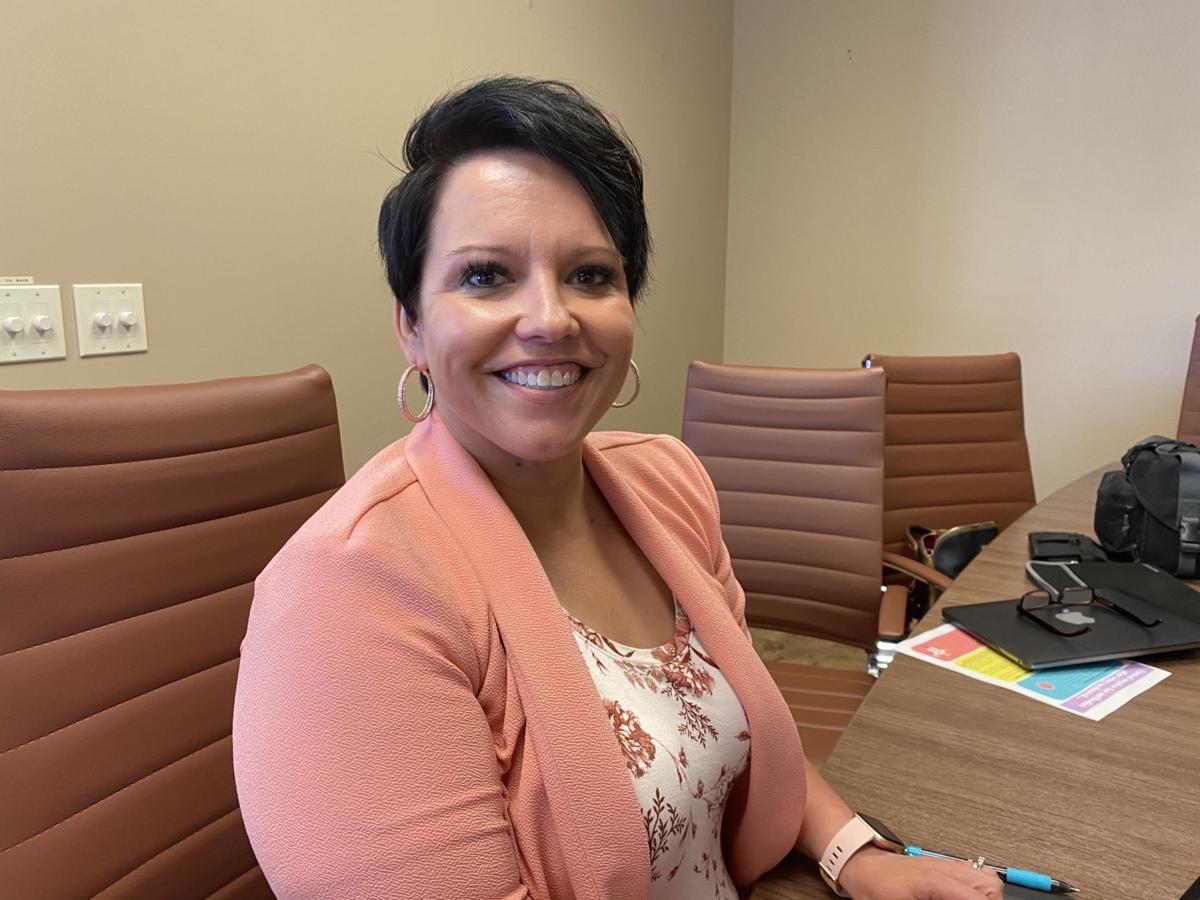 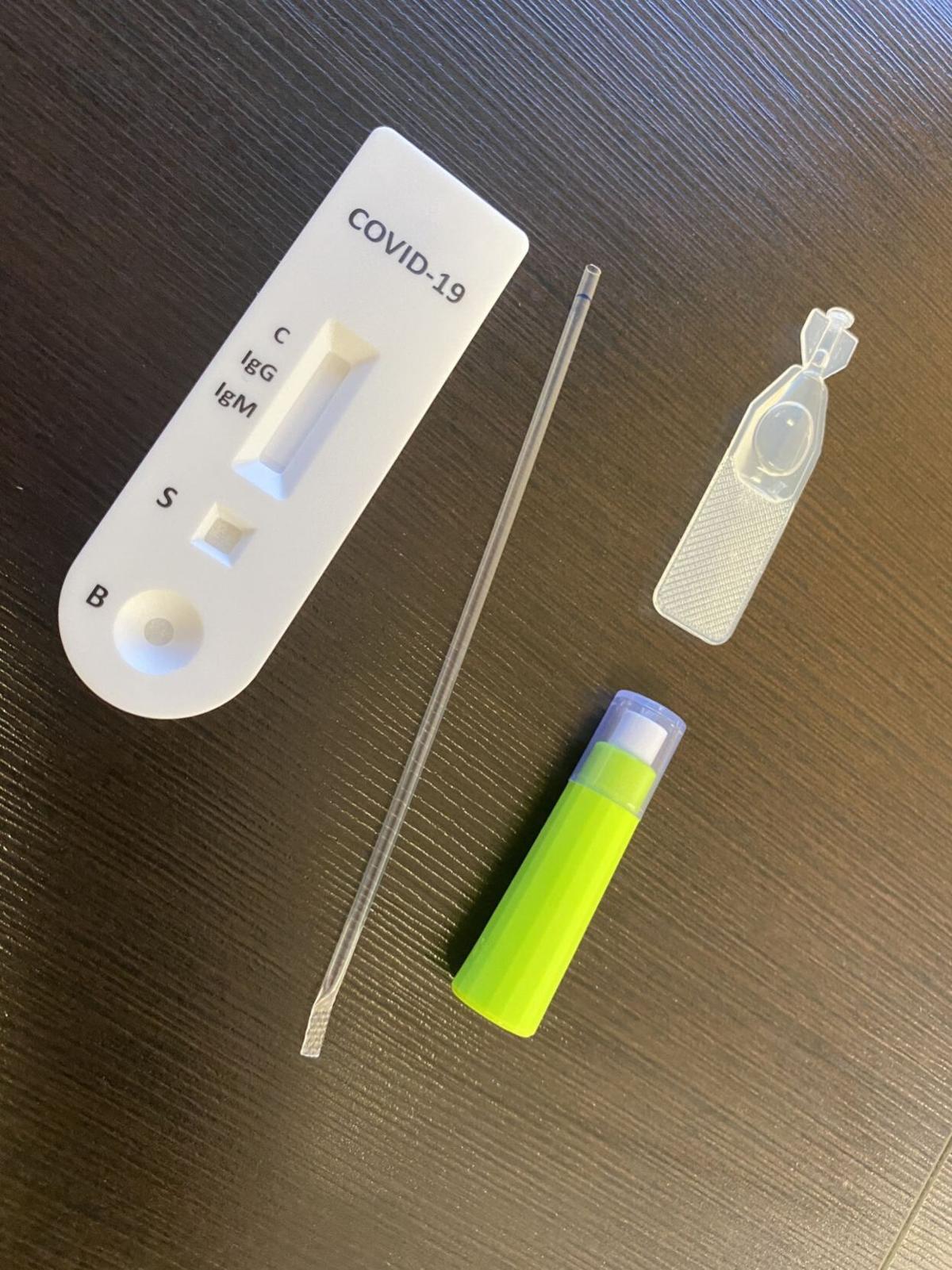 The testing supplies for the antibody test. The green tube pricks the finger. The slender pipette collects the sample. The flat test indicator uses a solution in the flatter plastic container to indicate whether or not the patient has antibodies. This rapid test takes from 10 to 15 minutes to reach an answer. 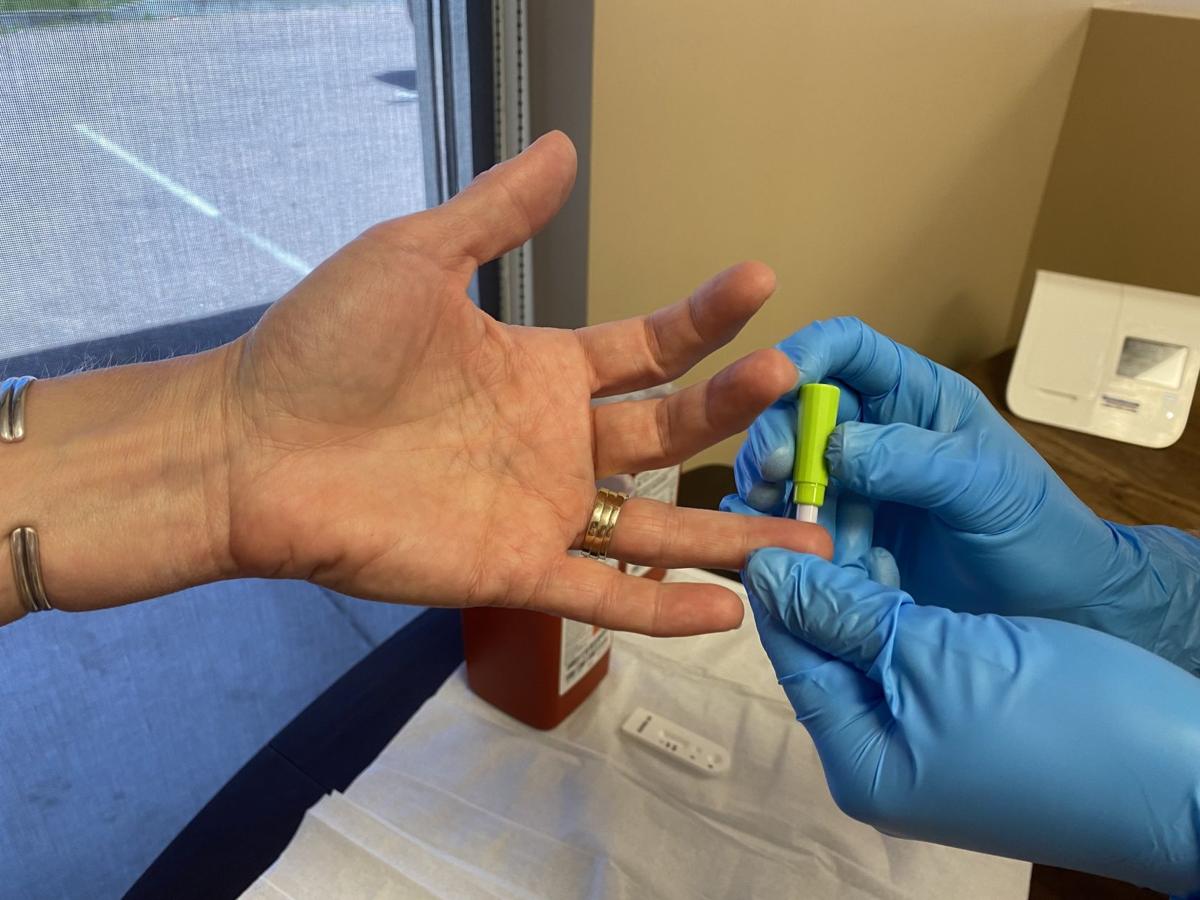 The finger prick does not feel more than a tiny jab. 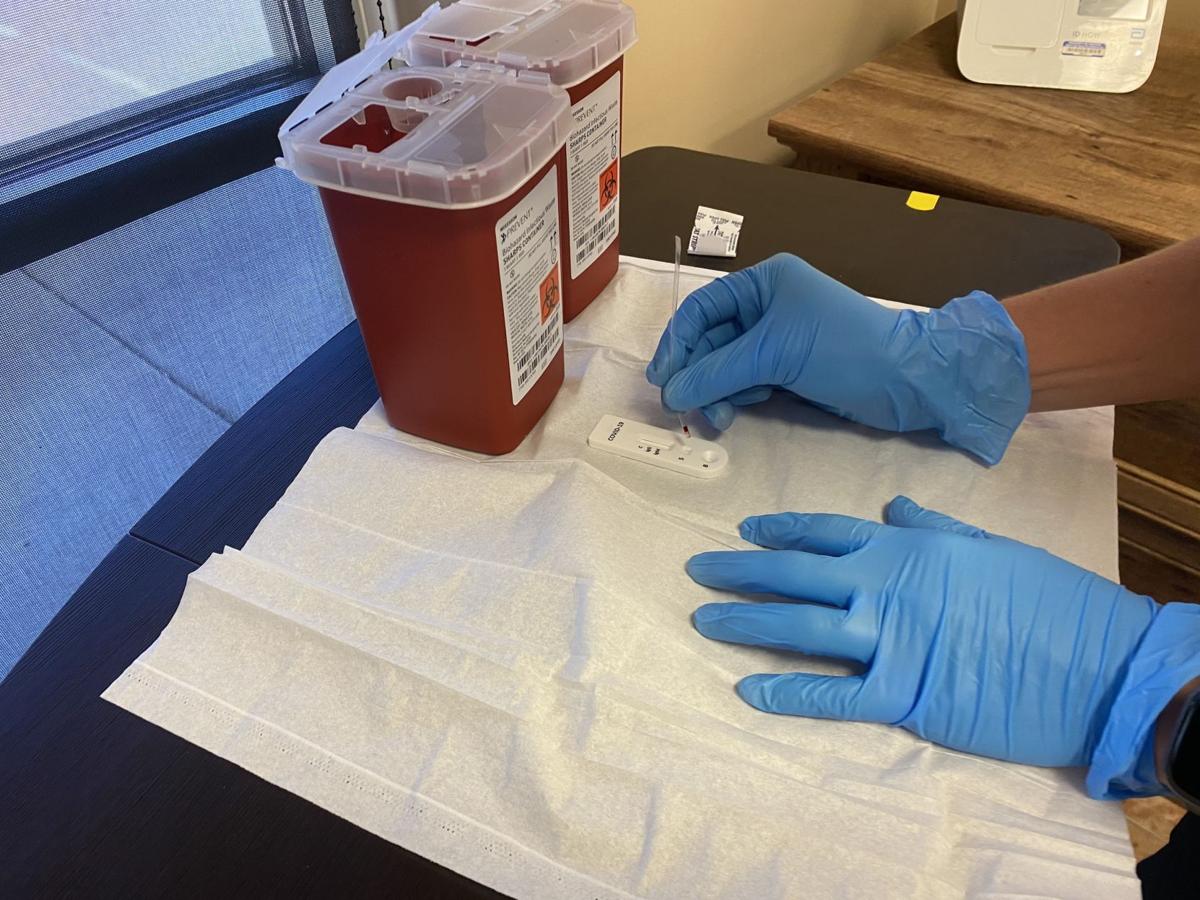 Placing blood in the antibody test. A solution is then added that indicates whether antibodies are in the blood or not. The county test requires a significant amount of antibodies to show a result. If a patient does not have a result, further blood tests could show other antibody protections. 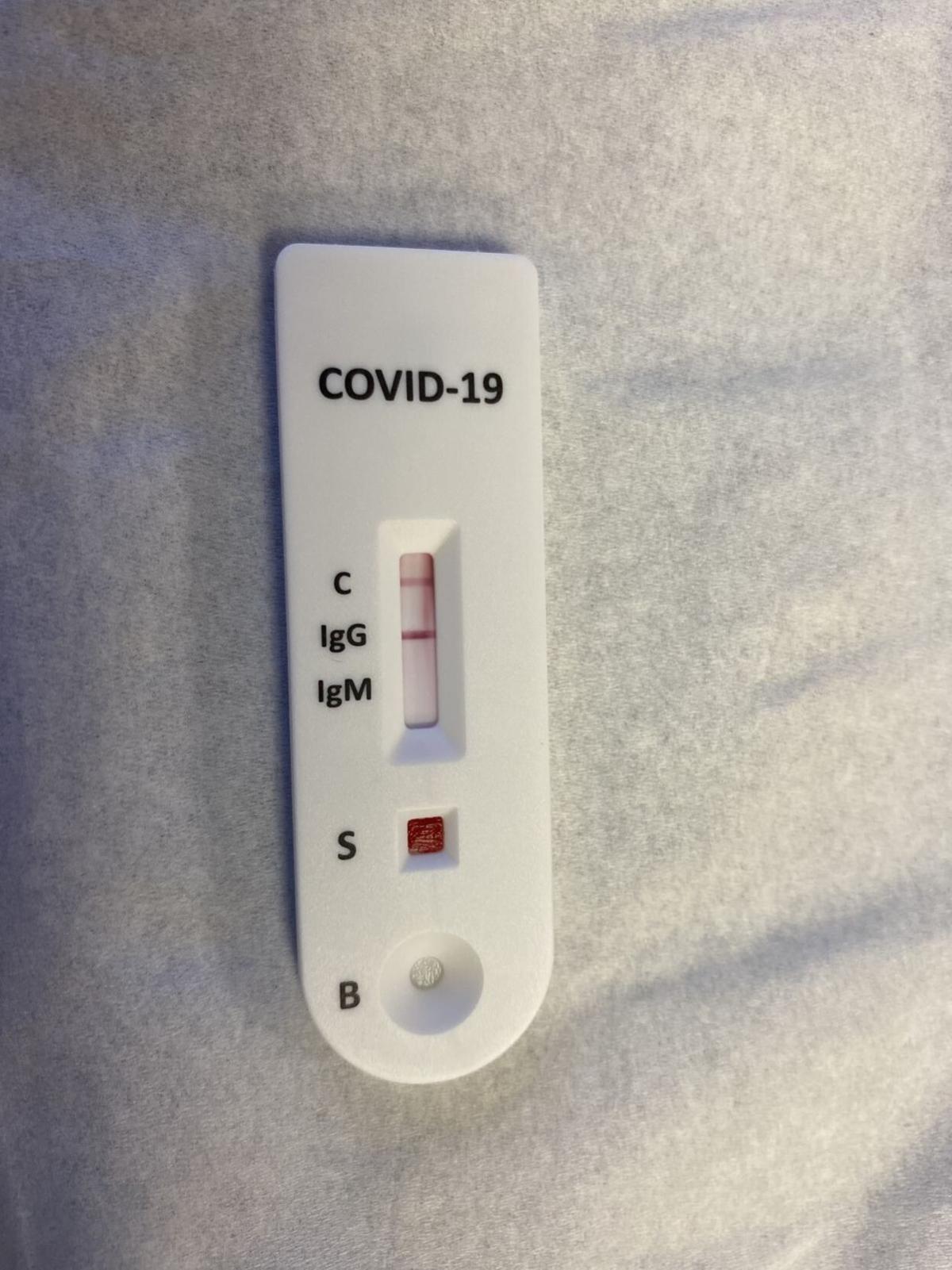 The lines indicate a large amount of antibodies.

Experts can only guess at how the pandemic will develop, as dwindling vaccination rates make it more unlikely the nation will reach the safety of herd immunity.

Many questions remain unanswered — due to a lack of data.

Will the vaccine remain effective in a year?

How long do antibodies produced by the immune system remain present after infection or vaccination?

Do low antibody levels after the shot leave someone more vulnerable to infection?

Why do 5% of the people who get vaccinated remain vulnerable to infection?

Have the virus variants arrived in the area?

To find answers, Gila County has opened testing centers in both northern and southern Gila County.

County staff can now process three different tests that identify either antibodies to the virus produced by the immune system or the viral protein antigens produced during an active infection.

Antibodies stem from an immune response and may show how much protection you have from an infection.

Antigens indicate whether you have an active infection.

“The more information and data we can get from the community, the more we can see how close we are to herd immunity and how long antibodies are effective after having COVID,” said Stella Gore, public health emergency preparedness manager for Gila County.

She gave a tour of the new county testing site at 600 N. Beeline Highway between the Circle K gas station and the now empty restaurant site.

By next week, signs will identify the offices, but already staff have started testing.

Staff have designed a smooth process from making an appointment to receiving results.

Patients never leave their car for the testing process.

The antibody test involves a fingertip pinprick to obtain a drop of blood, with results in 10 to 15 minutes.

The county also has machines to read the two different antigen tests. One quick test shows an active infection — but only if administered within five days of an infection. The other can find signs of an infection for up to three months.

The Abbott ID NOW test “can show active infection or infection that happened within three months,” said Gore. The test “goes pretty far up the nasal cavity,” said Gore, but it is 94.7% accurate on positive cases.

This test is 95% accurate and does not have to go as far up the nasal cavity, said Gore.

The data from these tests will help public health officials determine the big picture on a unique virus.

County health officials do need patients to test once a month to gather enough data since so much remains unknown.

Testing so far has shown that the vaccine produces more long-lasting antibodies than simply recovering from an infection. That’s why doctors recommend people get vaccinated even if they’ve recovered from a case of COVID — especially for people who had a mild case.

People with few or no symptoms seem to lose their antibodies against the virus in three months, said Gore.

Experts suspect this means people with mild symptoms are more likely to get reinfected — but they’re not sure. That’s why the data gathered by Gila County’s test site will play an important role in understanding the virus.

Testing also helps to identify those who don’t seem to have antibodies after getting vaccinated.

Yet, even if people don’t have a strong antibody response to the vaccine — they may still have strong resistance to the virus, said Gore. That’s just another question to which the experts seek an answer.

The county test doesn’t measure immunity — just antibodies. The immune system also has other tricks to protect us from the virus.

So far, it appears antibody levels decrease over time — but we don’t yet know how that relates to the risk of infection. The rapid antibody test detects only relatively high levels of antibodies. So patients with low antibody levels will be referred to a doctor for further tests to determine immunity.

“One of the things we are concerned about, people who have been vaccinated and have a breakthrough case,” said Gore.

So, if you’ve been vaccinated, but have minor COVID symptoms — the county hopes you’ll drop by for an antigen test. The county will then send the sample to the state lab for genetic sequencing. This will help determine whether a new variant has made the vaccines less effective.

Already the variant from India has arrived in the state. Doctors worry this variant can spread faster, cause more serious illness and make the vaccine less effective.

Already, the variant first detected in England has become the dominant strain in Arizona. This strain spreads about 50% more easily and probably causes more serious illness — but so far can’t outwit the vaccine.

“We definitely are still pushing, ‘Get vaccinated for yourself and your community,’” said Gore.

Picture of the sign to be placed on the Northern Gila County testing office at 600 N. Beeline Hwy. The county hopes to have signs installed by…