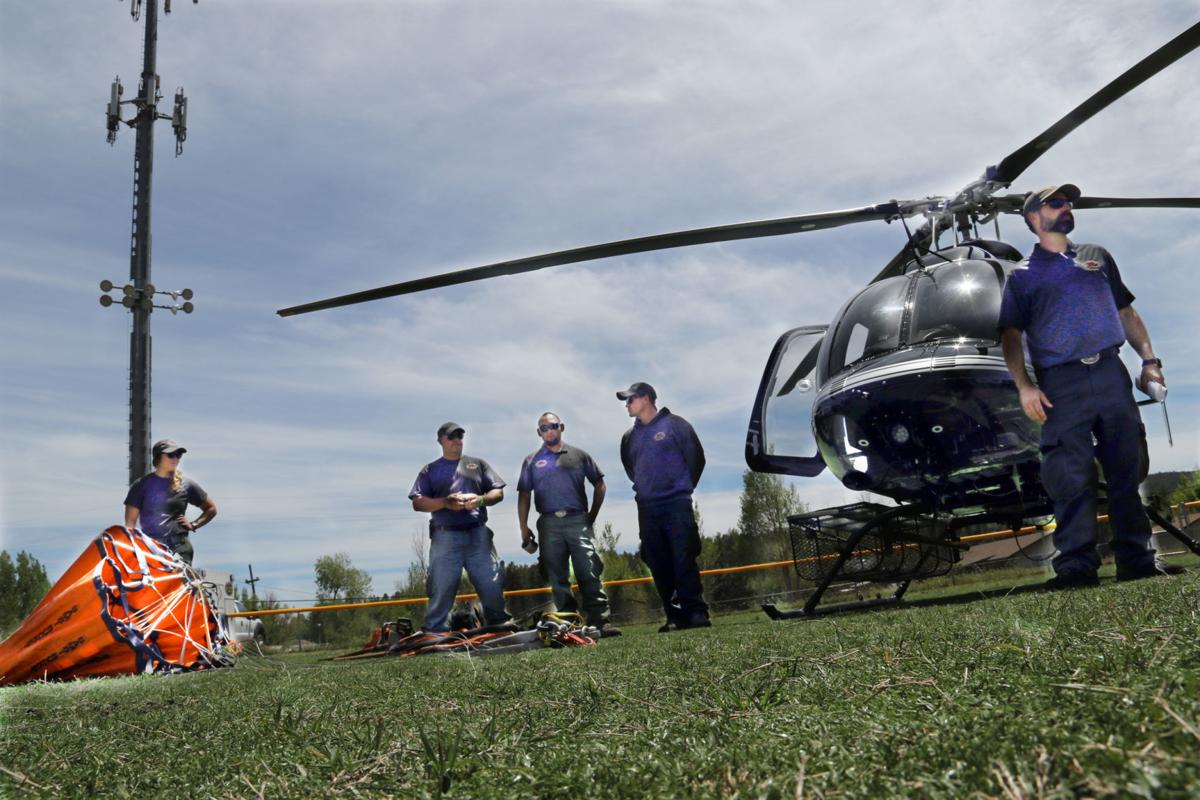 The Forest Service came to the Pine Firewise Day to explain how helicopters help during a wildfire. 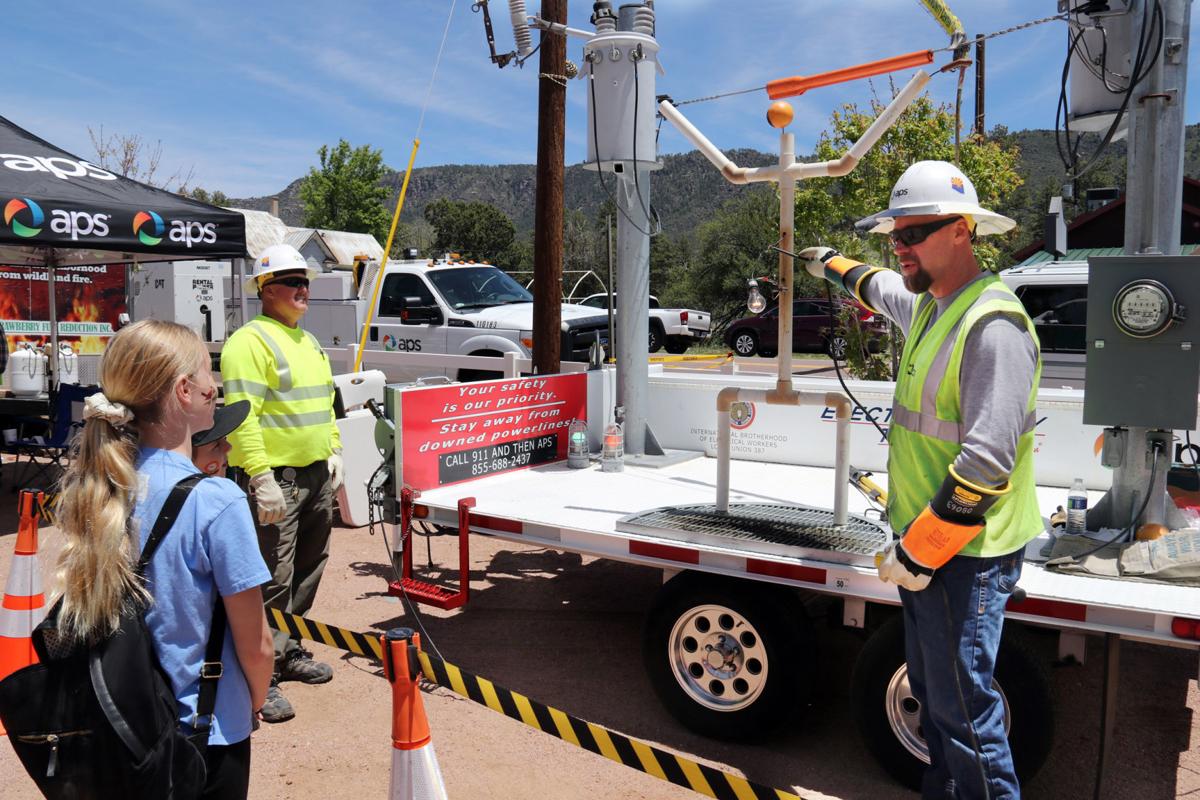 Kids watch what happens to a hot dog and grapefruit when high voltages run through them. The hot dog represents flesh, the grapefruit the veins and arteries of the human body. Blood carries electricity too well. 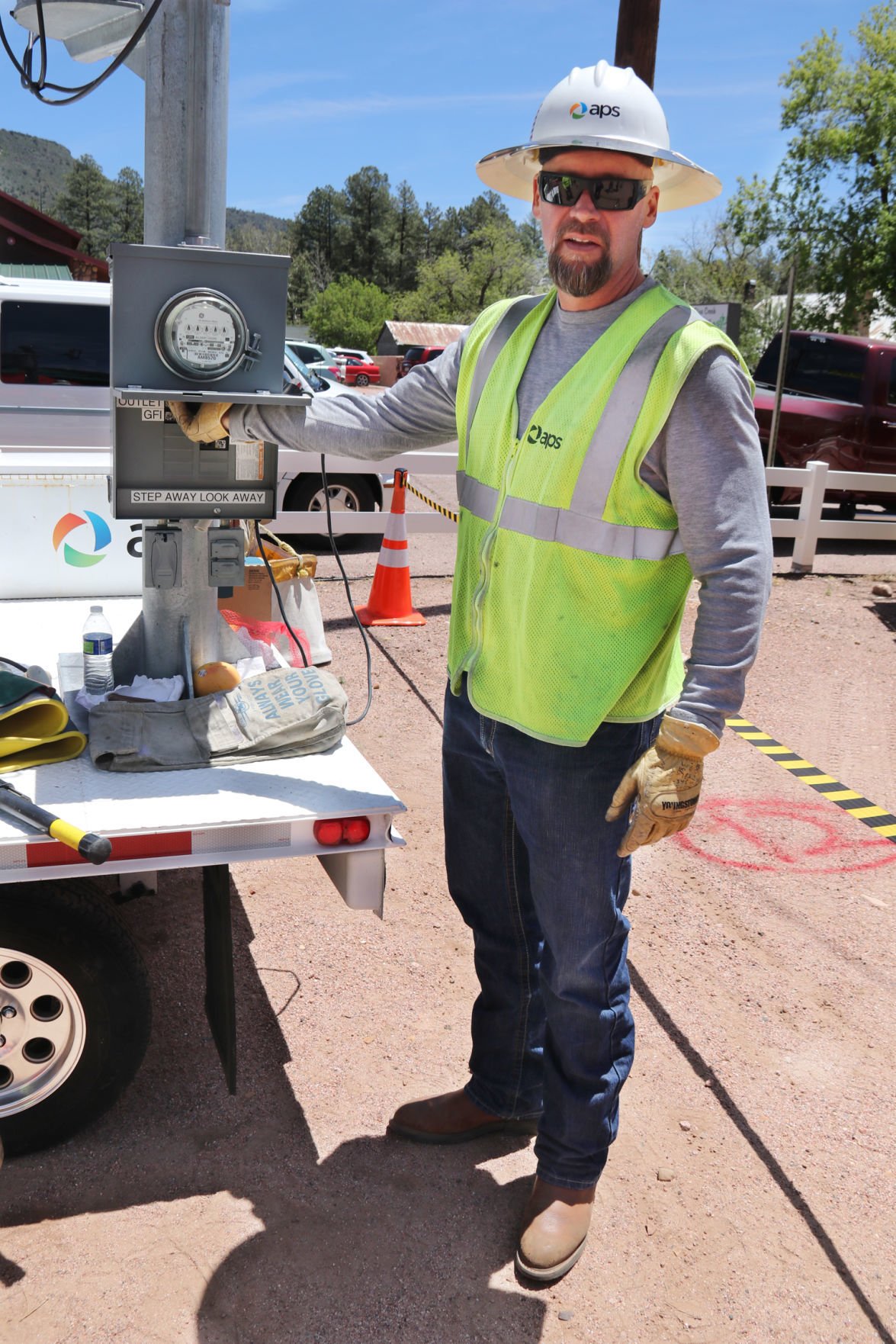 Scott Kahrs of APS shows how to properly approach a house fuse box. He warned if there is any smoke or flames, call APS immediately. 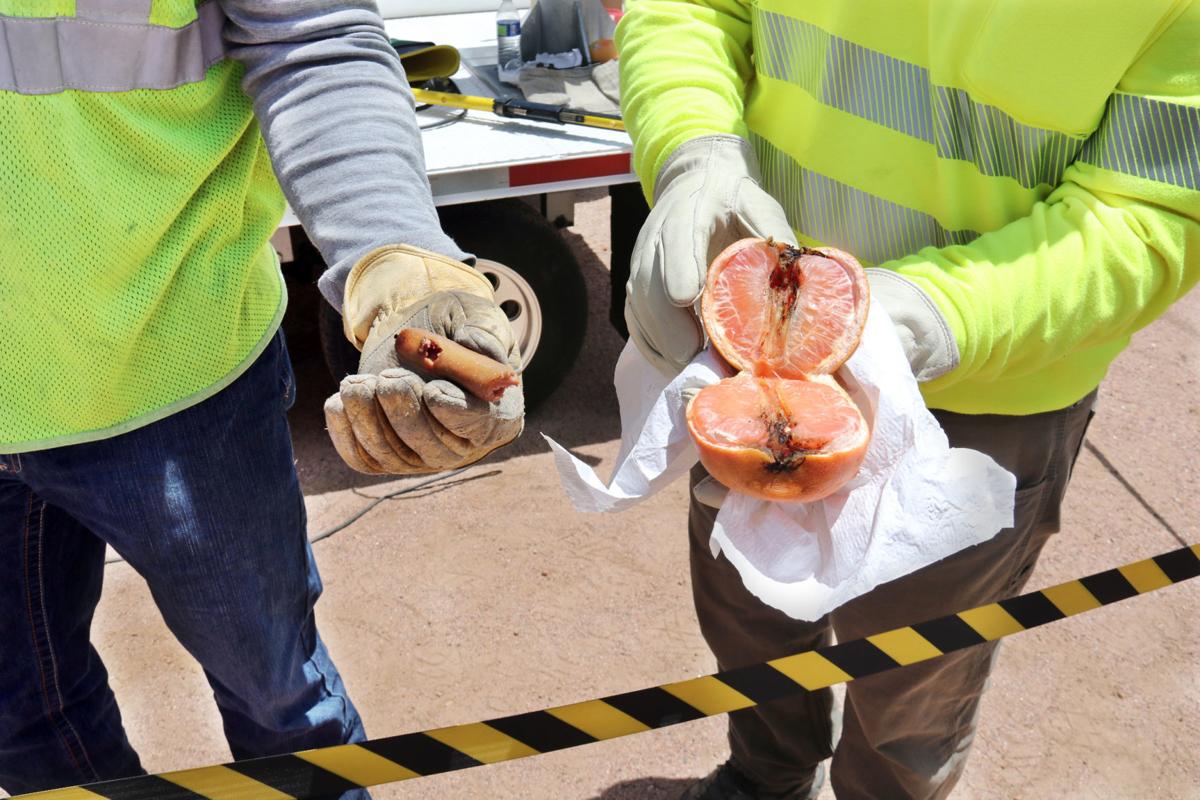 The hot dog and grapefruit post high voltage exposure. This is what you body will look like, says APS. 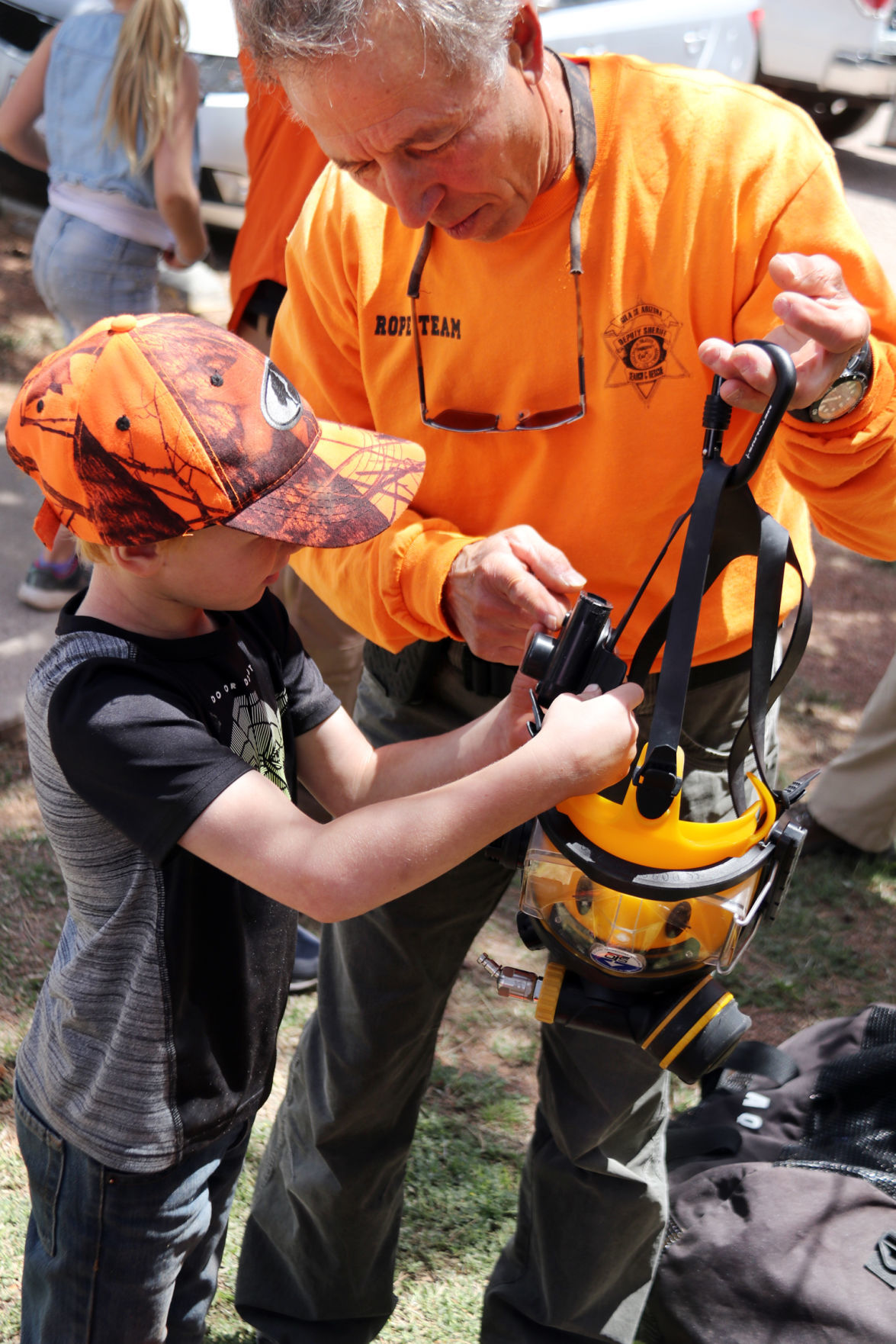 A young visitor examines a Tonto Rim Search and Rescue helmet during the Pine Firewise Day.

The Forest Service came to the Pine Firewise Day to explain how helicopters help during a wildfire.

Kids watch what happens to a hot dog and grapefruit when high voltages run through them. The hot dog represents flesh, the grapefruit the veins and arteries of the human body. Blood carries electricity too well.

Scott Kahrs of APS shows how to properly approach a house fuse box. He warned if there is any smoke or flames, call APS immediately.

Visitors to the Pine Firewise Day not only learned how to protect their homes from wildfire, they met a vulture named Voldemort and a Gila monster — and don’t forget the exploding hot dog.

Mike Brandt, with the Pine Strawberry Fuel Reduction Committee (PSFRC), said between 200 and 300 attended the May 18 Firewise Day, which he deemed “a good turn out.”

But he’d like to see more people visit the PSFRC’s Firewise trailer.

Brandt and his wife Janet have worked for years to educate Pine-Strawberry (P-S) residents on how to save their community from wildfire.

In 2004, when national research ranked P-S among the most fire-menaced communities in the country, the Brandts and fellow community members launched PSFRC. Through grants, the PSFRC has helped create a firebreak around the two communities.

Since launching, PSFRC has built trails, organized the Fire on the Rim Mountain Bike Race and put on the Firewise Day.

Events such as the Firewise Day build awareness.

Not only did visitors learn how to Firewise their property, they discovered what the Forest Service does with those helicopters up at the Payson Airport and the breadth and depth of the Tonto Rim Search and Rescue operations, as well as the dangers of holding a live electrical wire.

For fun, the Phoenix Herpetological Society brought reptiles — the Gila monster, a couple of rattlers and gopher snakes.

APS was front and center with its education wagon, complete with a PVC pipe stick human to show the lightning quick damage high voltage does to the human body.

Kids watched as Scott Kahrs and Troy Denman from APS ran electricity through a hot dog and grapefruit to mimic what happens to human skin or the vascular system when exposed to high voltages.

That much electricity running through a human for just a fraction of a second will boil the blood and fry the flesh.

To illustrate, the two opened up the grapefruit and held a hot dog that had suffered high voltage damage.

The grapefruit had burned from the inside out.

“Your blood has a lot of water that conducts electricity,” said Denman, “Since electricity runs at nearly 186,000 miles per second, it takes no time at all to cause damage.”

The hot dog represented flesh, said Kahrs as he pointed to the exploded weenie.

The kids watching promised to call APS if they saw a downed wire.

Out on the Pine Strawberry School field, Rob Wilson from the Forest Service showed off one of the helicopters used to fight a fire.

“This (bucket) can hold 180 gallons of water. We have others than can hold 250 gallons,” said Wilson.

The helicopter not only scoops up water, the crew has the equipment to create a firebreak and provide medical care.

“We have EMT’s on board,” said Wilson. “They help if someone is hurt near the fire. We call that an incident within an incident.”

On the other side of the event, Tonto Rim Search and Rescue showed off their dive equipment.

The kids got to try on a mask that completely covers the head.

“We do rappel, white water and backcountry rescues,” said Pitterle.

Kahrs and Denman said homeowners need to take care with the electrical panels on their property. It seems logical to flip breakers if they’ve been tripped, but the two APS educators said sometimes it’s not so easy to flip that switch.

“The message with the panel is, stay away if you see fizzling or smell burning,” said Kahrs.

“Call a licensed electrician to fix the box,” said Kahrs.

Scenes from the 2019 Pine Firewise Day