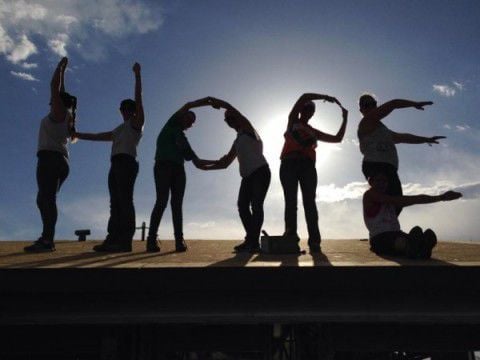 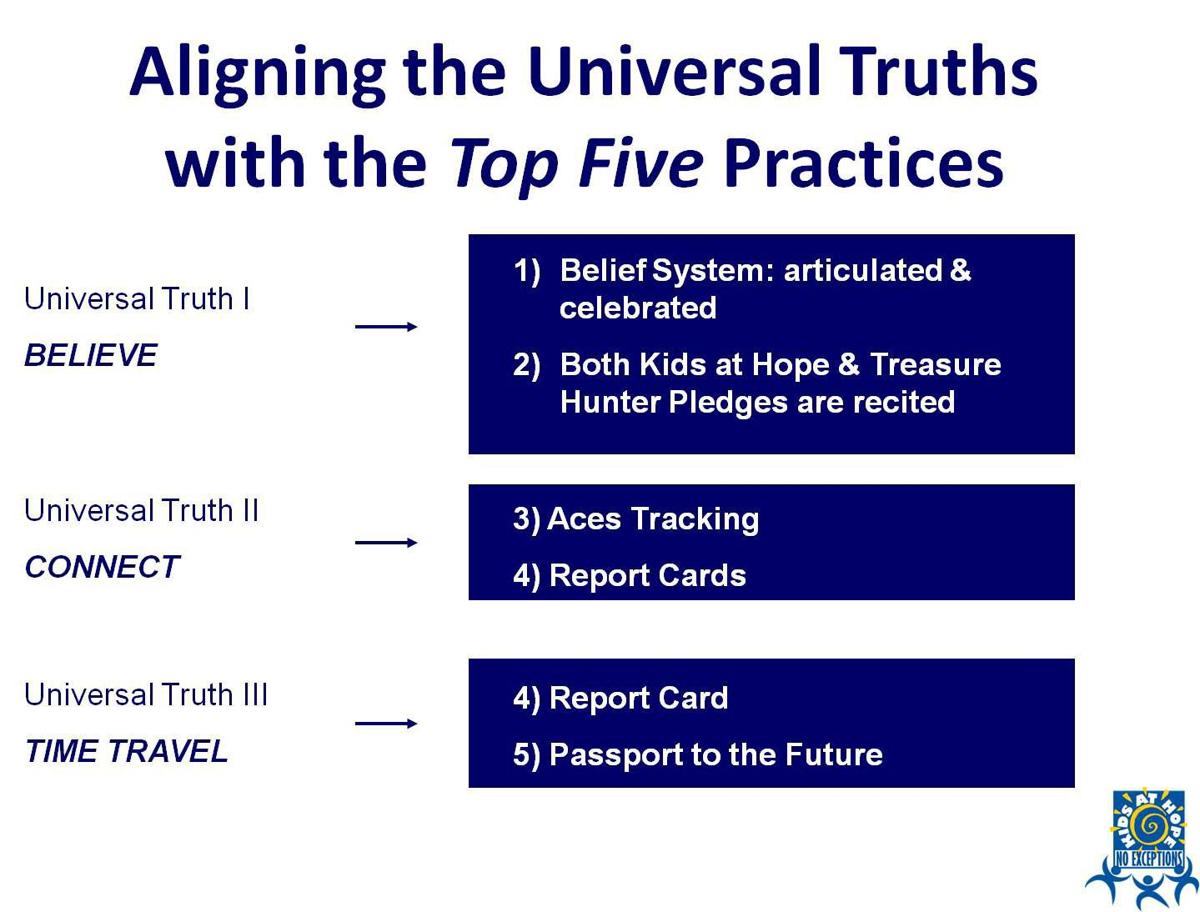 Here’s an experiment for you.

Sit down with your eldest child. Tell him he’s lazy, short and not that good looking. Tell him he’s got the genes of a thief. Tell him he’s no good with numbers and ought to shoot for a job flipping burgers. Do that every time you meet with him for a year or two.

Now, call in your second born. Tell her she’s funny, interesting and has a flair for drama. Tell her she’s so good with colors, you bet she’d make a great artist. If she says she dreams of horses, get her riding lessons. Do that every time you meet with her for a year or two.

Which kid will listen to you — trust you? Which kid’s going to take chances and work hard to accomplish something difficult?

Then how come we’ve been telling the kids who face the biggest challenges that they’re trapped by risk factors over which they have little control and therefore they’ll be lucky to stay out of prison and off drugs?

That’s what Gila County Chief of Probation Steven Lessard is trying to figure out.

“We were so focused on punishment and risk that we forgot to focus on hope. Then we want these kids to succeed. Their dad’s in prison, their mom’s using heroin. You can put that kid in the best treatment program you can find — and they still have to go back home to the heroin addict mom who takes him to visit dad in prison. How’s he going to succeed?”

The approach grew out of decades of research on motivating kids — especially kids facing big challenges. The department has aligned itself with the Center for the Advanced Study and Practice of Hope at Arizona State University. The center grew out of research launched years ago by Rick Miller, now the center’s clinical director. (https://kidsathope.org/ and https://www.youtube.com/watch?v=vIpDKHw1O_c).

The new approach faces some big challenges and opportunities. For starters, the probation department has shut down its small, expensive lockup facility for juveniles. That means they try to handle most of the 1,000 or so referrals every year without a locked facility — which means dealing with kids in the community.

Moreover, the county’s about ready to open up a teen center in Payson. The center will serve any kid who shows up, but it will offer vital alternatives for kids in the system and on probation. The center will have computers, study areas, pool tables, recreation rooms — even a place a teen can stay overnight. The facilities will give probation officers a place to meet and work with families and a safe respite for kids facing challenges at home.

The Route 87 Teen Center will open in January on Cedar Lane, near St. Vincent de Paul, with a $100,000 investment by the county. “Mostly it’s a community center — any kid can use it,” said Lessard.

All of this grows from a determination to think about children differently and to adopt the mantra that “all children can succeed — no exceptions.”

The research at ASU and elsewhere suggests decades of labeling kids according to their risk factors limits them more than it helps them. Too often, probation officers, counselors, teachers, parents and others focus on problems and deficiencies — not on the dreams and abilities, said Lessard.

“We have ‘risk’ conversations, not ‘hope’ conversations,” Lessard said in a recent interview. “We are experts at risk assessment — but we’ve had to learn how to start teaching hope. Now, we’re focusing on their strengths. So we have a kid that has a passion and a gift for art. But he’s in the system for drugs. So we talk about his art skills and do everything we can to focus on what he does best. Maybe we display that art. Maybe we sell that art. Maybe we look at schools that will take him as an art student. Before, we were mostly looking at his drug use and putting him in with other people who use drugs and then telling him not to hang out with ‘bad’ people. Now, we’ll say, ‘bring in your art since last time we met.’ We want to push him in the direction of success all the time — instead of punishing him all the time. Look at the good in the kid instead of the bad.”

Lessard said the department gets 1,000 countywide referrals annually, mostly for minor problems. About 300 of those referrals come from Payson High School. Although northern Gila County has many fewer risk factors in terms of poverty and patterns of family drug use, school officials in Payson are far more likely to call police to deal with student behavior, he said.

“The vast majority are really very minor offenses that could be dealt with at the school and parent level — like vaping tobacco, not showing up at school or truancy — things that in our day were dealt with by parents and principals. Today, they call the police.”

The vast majority of cases end up in “diversion,” with kids shifted to work with a community organization. Only about 35 of those Payson referrals each year deal with serious criminal behavior, with the teen’s behavior posing a real risk to himself or others.

“These cases involve violence, drugs, theft — mostly drugs and most of that is marijuana,” said Lessard. Those teens might still end up sent to Pinal County, with a secure, locked facility.

The Gila County Probation Department has been working on training probation officers and implementing the new approach for a year — and is already seeing results.

“Kids at Hope is a way to keep kids from getting involved in crime in the first place. We’re seeing it has unleashed their creativity. The justice system hasn’t moved the needle in 50 years with risk-based supervision. A certain number succeed. A certain number fail. That hasn’t changed. But we believe that every single kid can succeed — no exceptions.”

In a Ted Talk online, Miller laid out the approach at the heart of Kids at Hope.

He offered the example of a child born to a drug-addicted mother in prison, whose father was murdered with a shotgun blast before his birth. The child ended up in foster care, where he was physically, sexually and emotional abused for 14 years. After that, the boy went to reform school. At 18, he was released from the system, given $66 and told “have a good life.” He ended up homeless and on the streets.

“Would we have said that’s a young man ‘at risk’ or ‘at hope’?” asked Miller.

“Would you now consider him a man ‘at risk’ or a man ‘at hope’?” asked Miller.

The key lies in ensuring every child has adults who believe in him — and teach him how to envision the future. This doesn’t just involve jobs and careers, but family relationships, community relationships, hobbies and what you do for fun.

“Hope is the ability to visit your future — imagining it so you can prepare to achieve what you already saw in your mind’s eye,” said Miller. “You learn hope like you learn reading, writing and science — like you learn all the other skills and knowledge offered during our lives. But can we teach something we don’t know? If you’re not a hopeful person — how do you help a child to become hopeful? We have to create adults at hope. It’s not the programs that make a difference — it’s the adult relationships. You can’t plop a child into a six-month program and expect something remarkable to happen.”

This approach doesn’t ignore risks and mistakes — but it keeps focused on the future and on a child’s strengths.

Lessard noted that teens and adults on probation have made huge contributions to building the teen center. “That’s the hope — giving them a way to pay back the community that they victimized. We have guys who say they can’t pay their fine. All right, meet me at the teen center and work it off. So now there’s no excuse for not paying the fine, not completing the treatment programs — and they’re helping the community at the same time.”

The teen center itself will contribute to the new approach, providing teens with the tools they need to succeed in school, work out problems with their parents and develop relationships with adults who believe in them, said Lessard.

Police officers often call the probation department trying to figure out what to do with a teen who’s had a fight with their parents or acted out in a way that doesn’t rise to the level of an arrest. The teen center offers an alternative.

“The teen’s not detainable, but maybe needs a 24-hour cooling off period — someplace to sleep. Now we’ll have that,” said Lessard.

Things have changed already. “Five years ago, we were detaining every kid that had an infraction. Doesn’t matter — we put them in detention. That has changed dramatically — because you do damage to kids when you put them in that environment.”

Lessard noted that Gila County is the first to fully embrace the Kids at Hope approach. The county has been working to train the school principals throughout the county. “We’re the first in Arizona to do that,” said Lessard. “We want principals, police, firefighters all trained — this is a communitywide hope system. Whoever touches a kid in this community, we want them to understand the message of hope.”

He said it feels like a revolution in his 30 years in the system. “We’re not doing this because it feels good — research is driving our decision-making. When you instill hope and look at the strengths kids have, they succeed. When you look at risk and punish them — they fail, almost every time.

“We’re having a blast doing it and we’re safer and the kids are safer and the community is safer. We’ve been harming kids without knowing we’re harming them. When they do something wrong — we need to respond — but not in a way that makes them go backwards. Respond so they can go forward.”