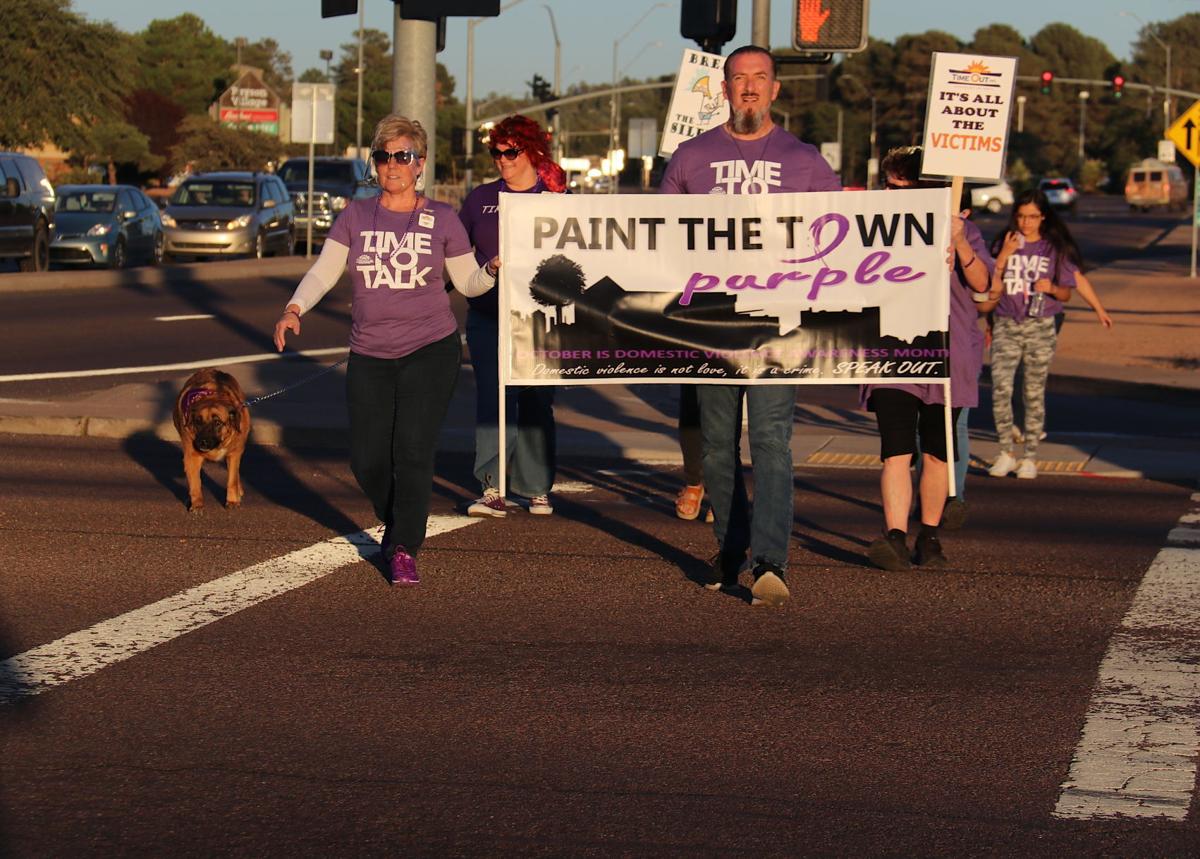 Gwen Zorn, CEO of the Time Out Shelter (far left) marches with her staff, board, and her husband, James (holding the sign) to bring the community the message, “It’s time to talk” about domestic violence. 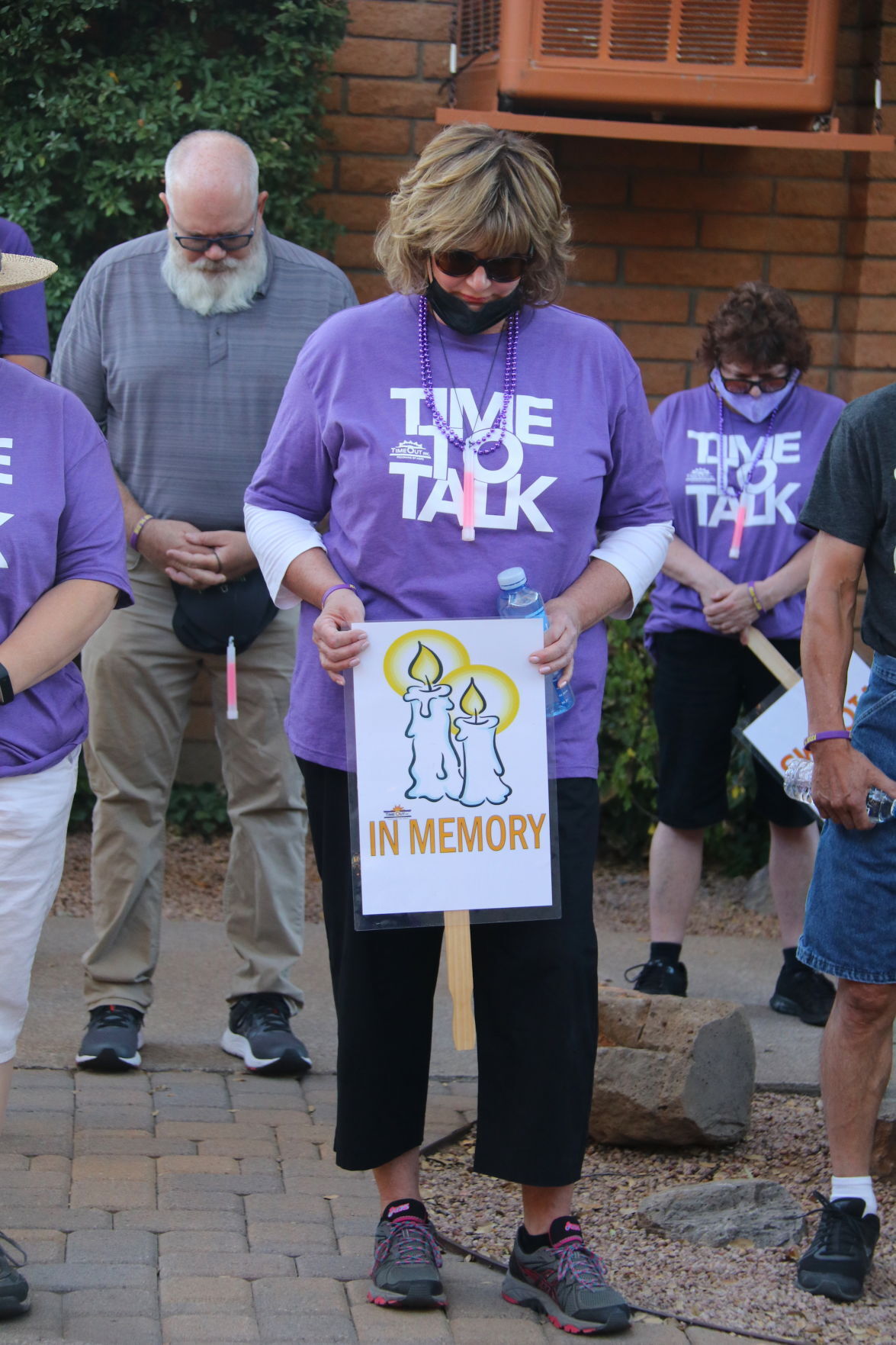 Kristin Croak, the Time Out board chair, lowers her head in prayer at the domestic violence candlelight vigil held at Expedition Church on Oct. 14. 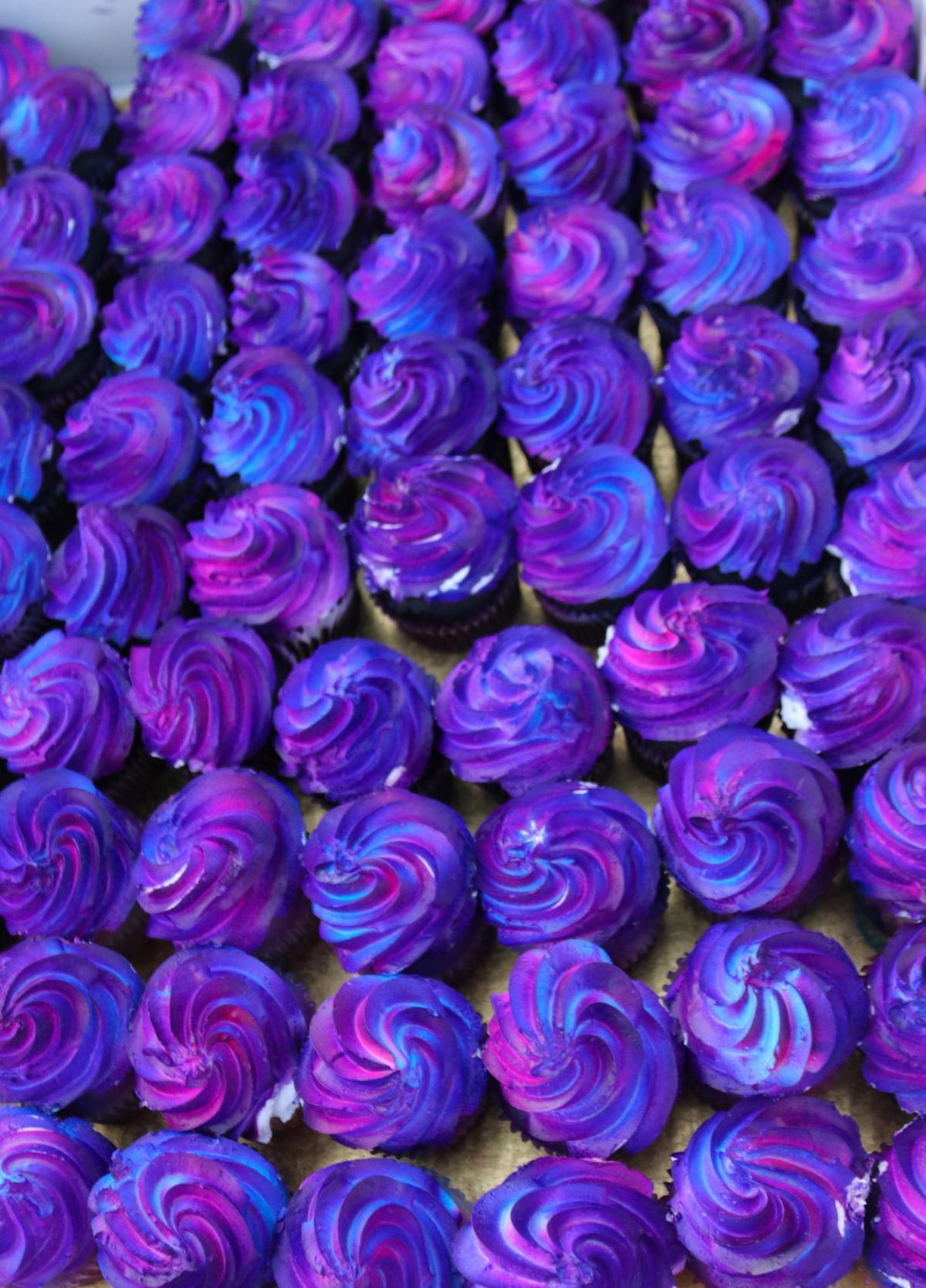 There was no question purple was the color of the event. Anyone who wanted one could have a deep purple cupcake to honor the survivors of domestic violence. 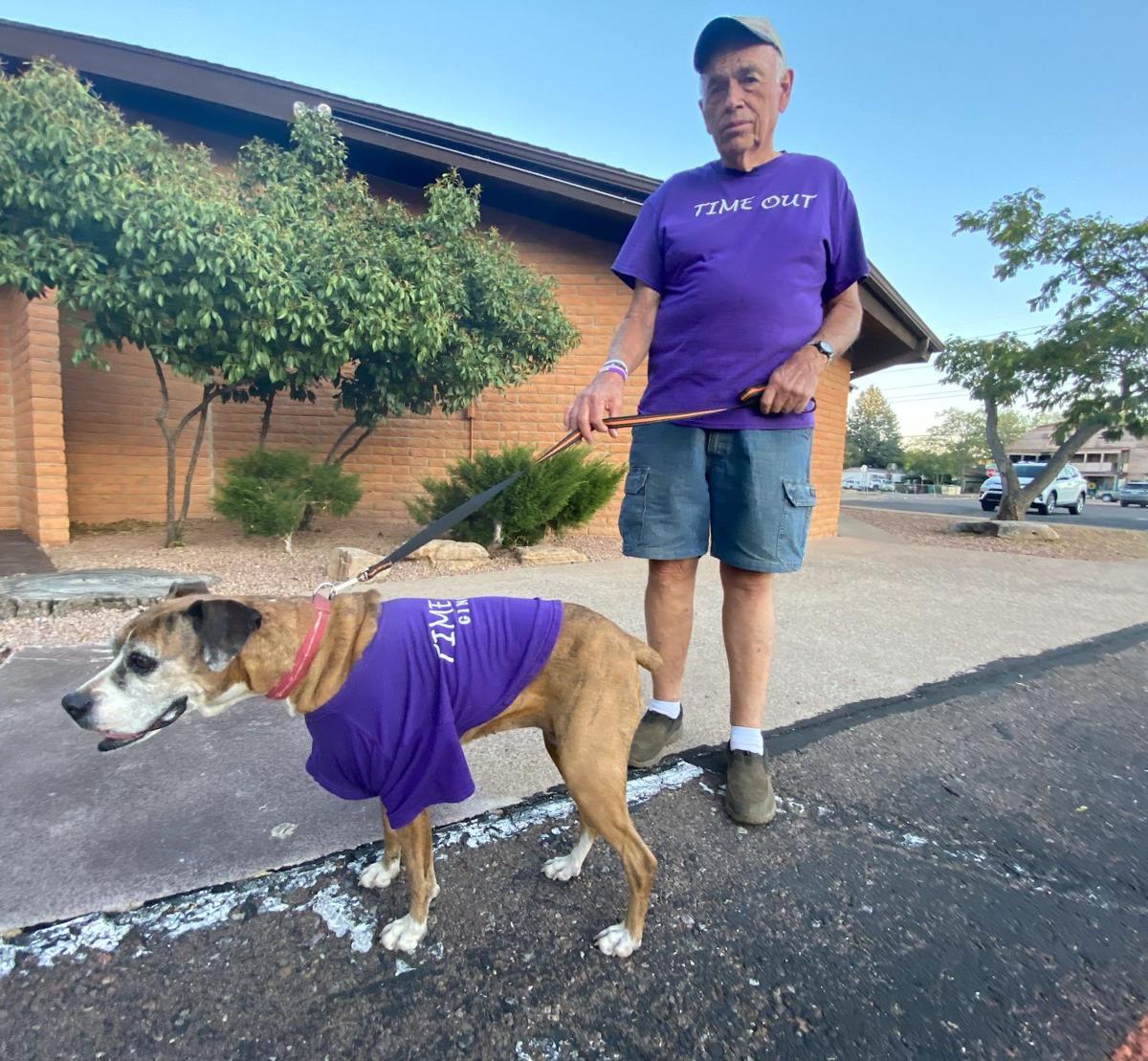 Time Out Thrift Store Volunteer Stan Wickinson and his boxer, Ginger. She’s got a fan club that buys her pawn sign photo to raise money for the Time Out Shelter.

It’s time to talk, said Time Out Domestic Violence Shelter CEO Gwen Zorn to 54 people who gathered for a candlelight vigil and march on Wednesday, Oct. 14.

It’s time to talk about the 280 sexual violence assaults in Gila County in 2019.

It’s time to talk about the 218 domestic violence reports.

It’s time to talk about the increased threat caused by the pandemic.

And just in case anyone missed the message — most of those who marched from the Expedition Church to the intersection of Highways 260/87 and back again on Wednesday evening wore purple T-shirts declaring: Time to Talk.

And walk, as it turns out.

The pandemic has added to the already terrible toll of domestic violence, prompting an increase in calls. The financial strain, stress and isolation have all contributed to a surge in cases, according to the National Domestic Violence Hotline. In the first two months of the pandemic, calls increased by 9%. Callers cited COVID-19 as a factor in their abuse.

Time Out board member Steve Smith has embraced the shelter’s new slogan.

“We owe it to our community to remind those victims who remain silent, it’s time to talk,” he said.

Smith believes the county’s only domestic violence shelter offers an essential service to the town. He would love to see “more government support” to help the shelter continue to provide services. For now, the organization relies on grants, but “every little bit” of support makes a difference, he said.

This year did not include a presentation inside Expedition Church. Instead, people remained outside for a brief program. To take advantage of the sun, the event started an hour earlier than in past years.

The residents who work in the Comfort Care program at the shelter made masks with fabric that had purple in it somewhere to hand out to participants.

As the sun set, the advocates for the victims of domestic violence walked along the highway brandishing signs and wearing their purple T-shirts. Passing motorists honked their support.

Purple tulle bows festooned the poles along the route.

Zorn’s entire board walked alongside her, spiffy in their purple shirts.

Representatives from the Mexican Consulate and the Department of Economic Security took part.

As the group walked to the junction of Highways 87 and 260, horns honked and the drivers waved in support.

The two have worked and volunteered at other DV shelters for many years because Wickinson “is drawn to women’s issues.”

He wouldn’t go into details, instead sharing how he and Ginger use her fame to raise money for the shelter.

“She has her own fan club,” he said of his boxer.

Fans love to buy her photo that she signs by dipping her paw into ink.

Another way to spread the message, it’s time to talk about domestic violence.

Throughout the event, the focus remained on the victims of domestic violence, hoping they’ll have the courage to finally speak out.

Long past time to talk.

Domestic and Sexual Violence in Arizona

Can you also write an article regarding the judges of Gila County continually releasing accused/convicted domestic violence perpetrators. Not only does this affect the victim, but it also has a devastating effect on the lives of children. Not only is this dangerous for family members, but it is also the most dangerous call for our officers. A quick look at the GCSO arrest log will showcase the 90% of those being arrested are for DV. Time to lock these people up and protect the most vulnerable!

I am not agreeing at all with the notion of the perpetrators getting released too easily. But, the judges are usually following state law (AZ Revised Statutes), so the means to fix this problem lie with the state legislature. This may be a good question to ask of the candidates running for the legislature.