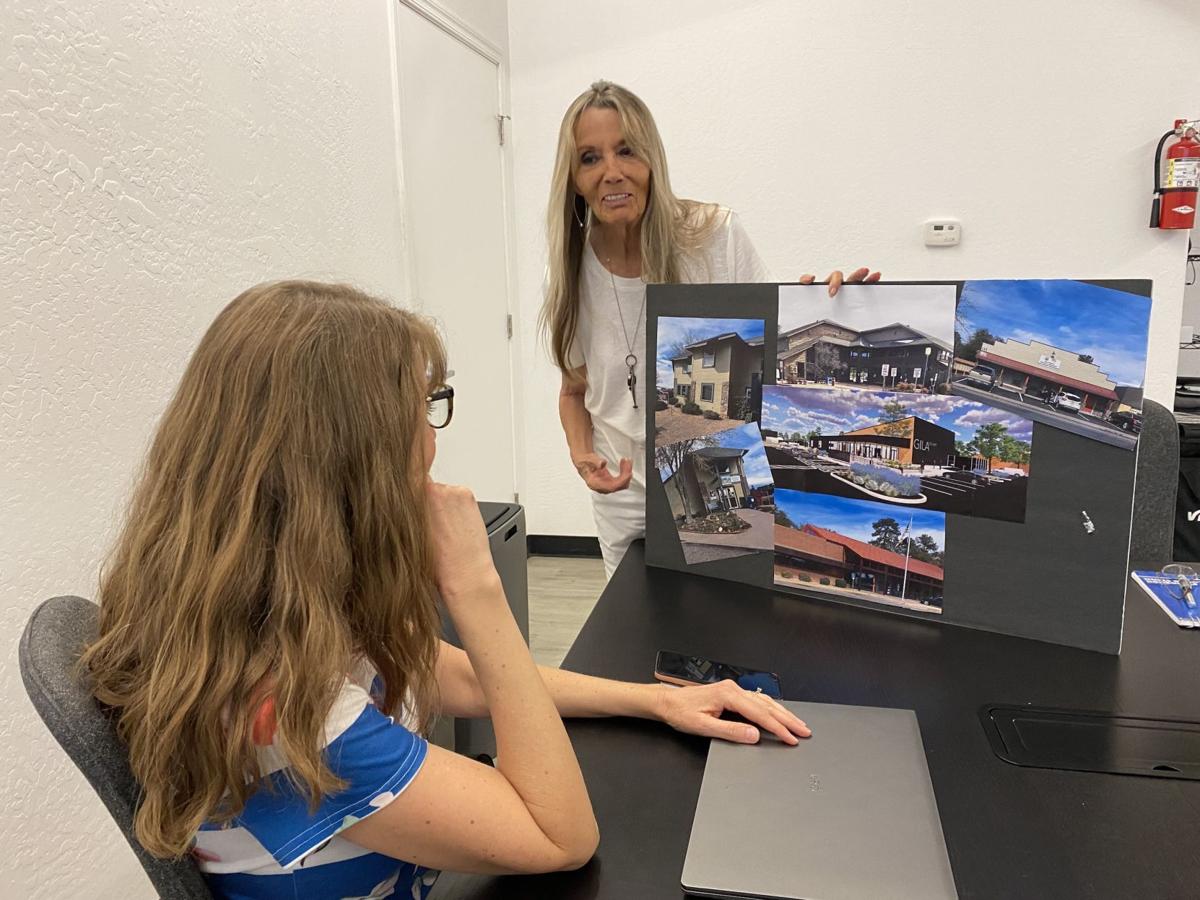 Minette Hart (standing) shows Sarah Hubbard the presentation she made to Gila County representatives on the need to blend the new county courthouse off of Highway 87 and between Main Street and Frontier Street with the other buildings in the complex. She did so because of the many complaints she received about the building. Minette Hart’s concept design for an arch over Main Street. The project has languished because of COVID.

Guild president Minette Hart discussed plans to beautify the county courthouse currently under construction during a guild meeting on July 13.

She said she has fielded many phone calls from residents complaining the new building does not fit with the area bounded by Highway 87, Frontier Street, Colcord Road and Main Street. So, she arranged for a meeting with the county architect and Homer Vela, assistant county manager, to see what they could do.

“I took the complaints I got on the street to the meeting — it was not only the lines of the building but the color,” she said.

The county has agreed to soften and brighten the paint.

Her larger hope is to put a mural on the back side of the courthouse that faces the post office off Frontier Street, “to distract from the lines and colors.”

The archway over Main Street has made little progress, however, “because of COVID,” said Hart.

Chuck Jackman reached out to Hart and suggested they use the two walls already at the entrance of Main Street as the base of the arch.

Several businesses on Main Street offered to hold fundraisers for the arch, but Hart would prefer to get a meeting together with an architect and engineer to see what “we can physically do,” she said.

The Payson Main Street Guild plans on hosting its Main Street Dayz event in the fall and a Christmas tree lighting the weekend after Thanksgiving.

For more information on the Payson Main Street Guild and its meetings, see the group’s Facebook page.

I still think a relatively low-cost Western façade on the new industrial-looking building would be a great investment for the Town.

Anything would help. It’s a very poor architectural design. Cheap looking and way too modern looking for the theme of the town.