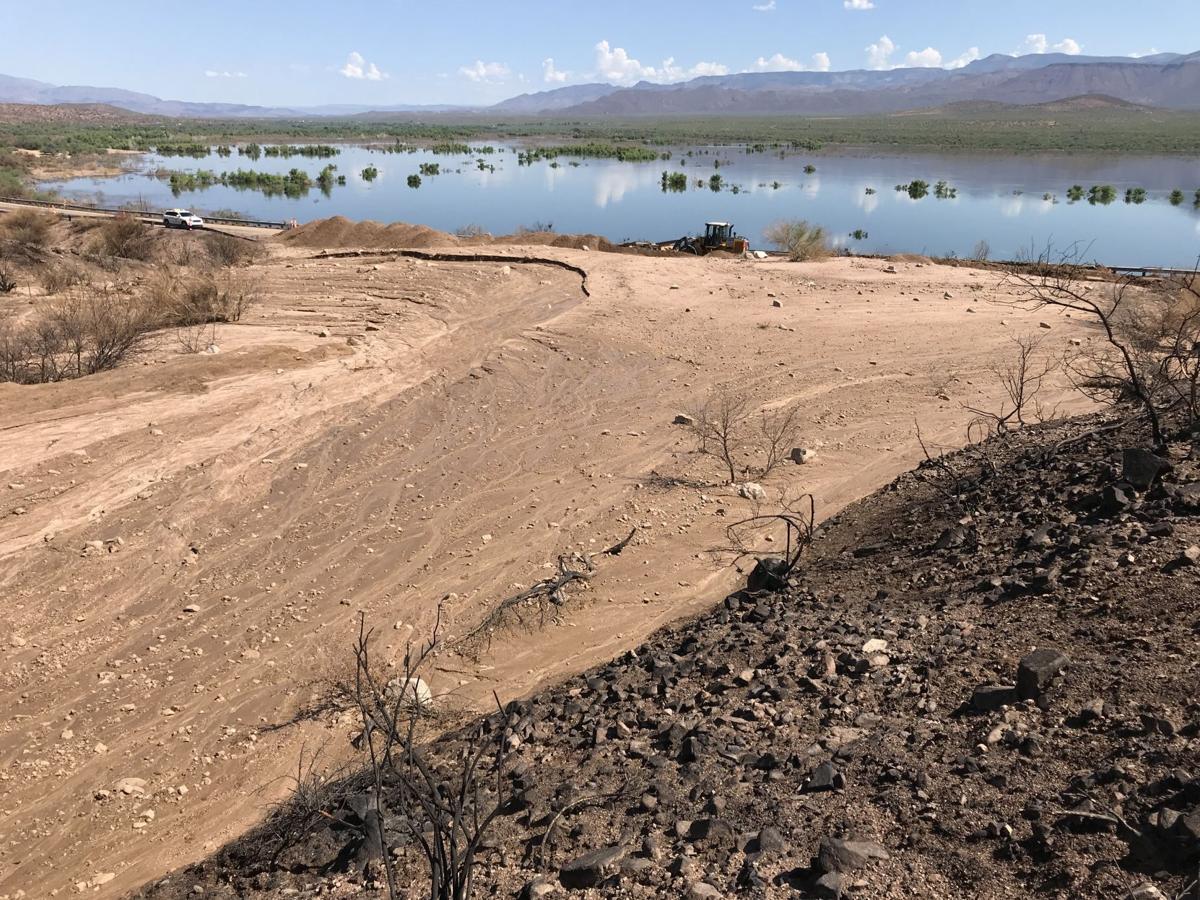 Crews worked Tuesday to remove debris as deep as eight feet from State Route 188. The roadway has since reopened. 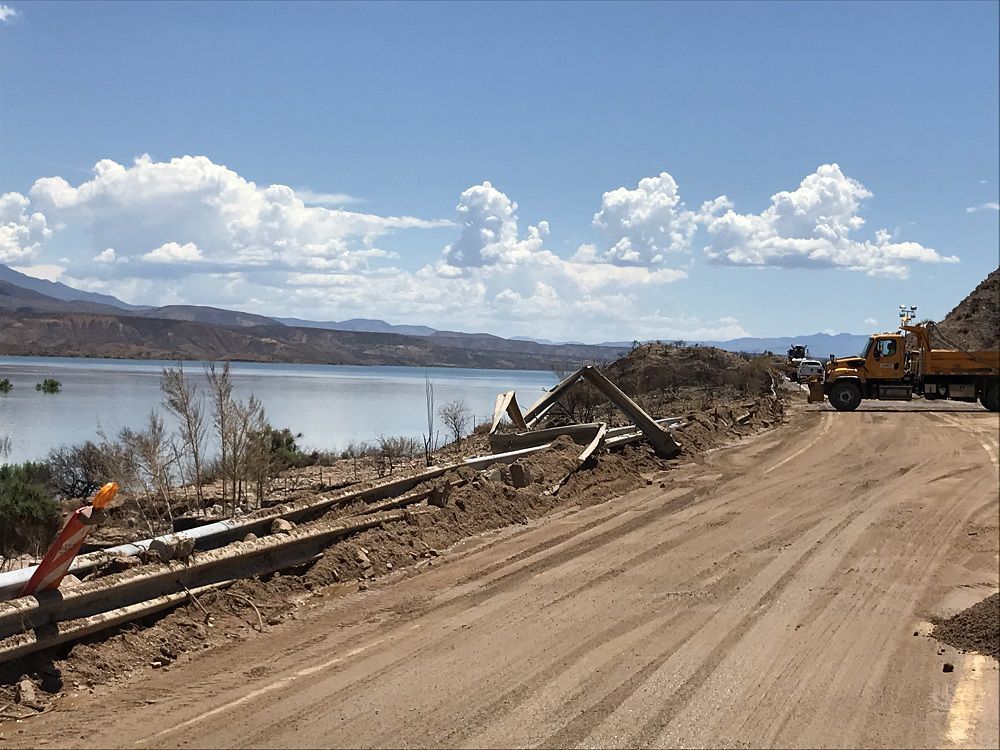 Officials said it would take at least several days to get the guardrail repaired. 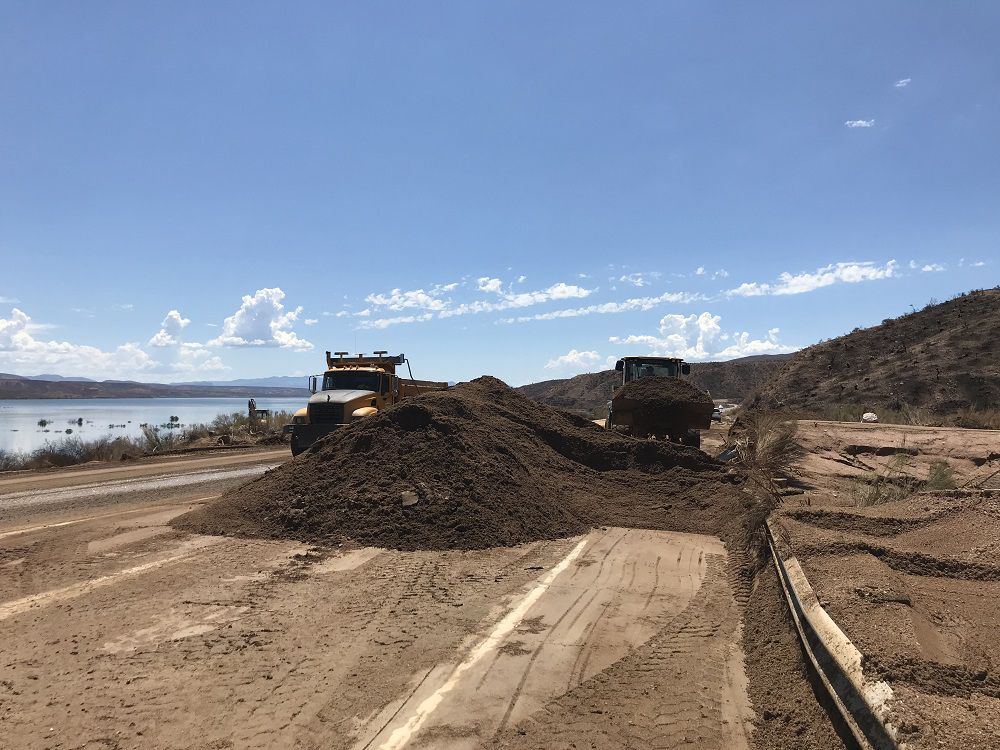 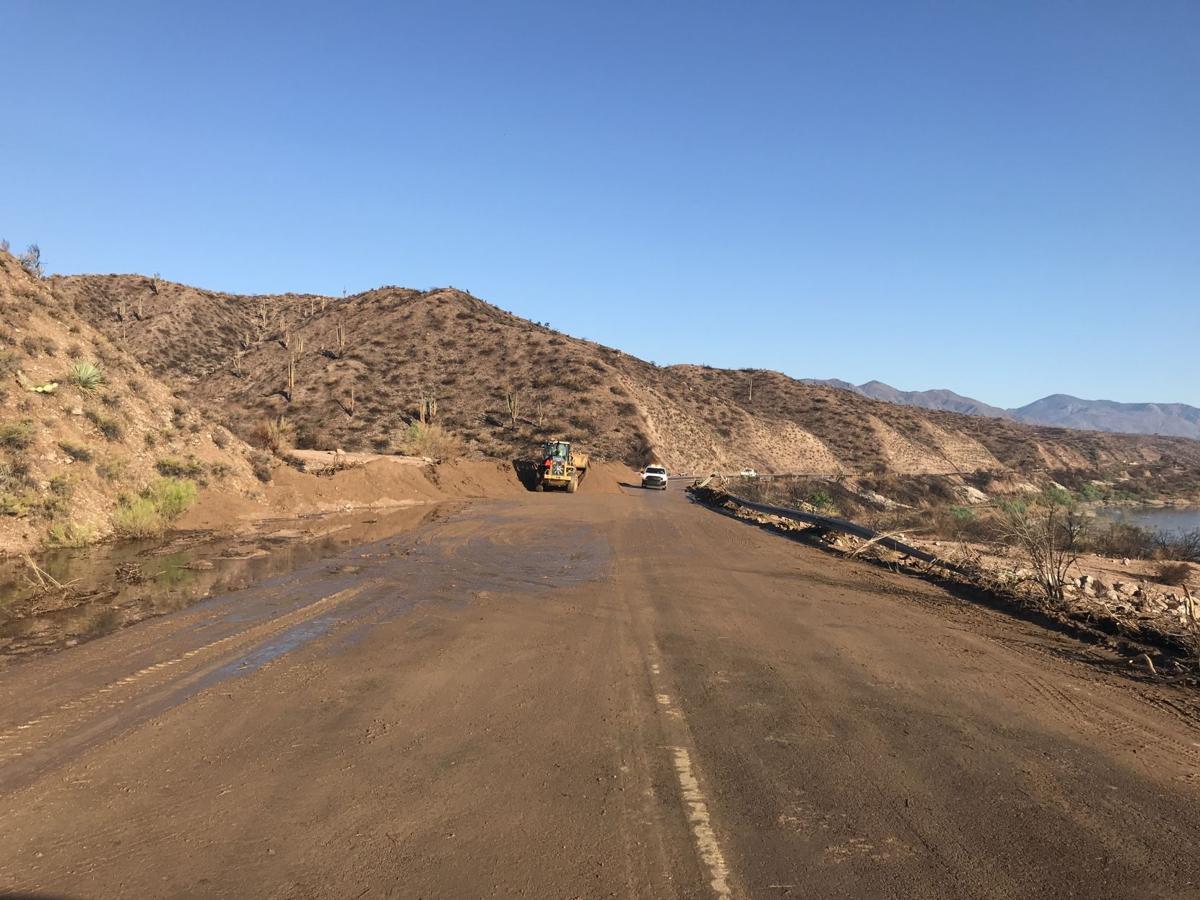 Crews worked Tuesday to remove debris as deep as eight feet from State Route 188. The roadway has since reopened.

Officials said it would take at least several days to get the guardrail repaired.

Officials said it would happen and on Monday night, when a monsoon storm rolled through, Tonto Basin saw several mudslides in the Bush Fire burn scar area.

State Route 188 was closed on Tuesday as crews removed tons of debris and mud from the roadway.

There were two major mudslides along 188, the first just north of Orange Peel and the other south of Bumblebee Creek, said Lt. Tim Scott, who drove to Tonto Basin Monday night around 9:30 p.m. to see the damage.

Scott said he passed over several smaller debris fields before reaching the one near Orange Peel. It was so wide he could not cross it.

On Tuesday, the Arizona Department of Transportation reported the debris was as high as eight feet in sections.

“In two areas where washes flowed across the road, the debris was estimated to spread at least 200 feet per location,” said Garin Groff, public information officer with ADOT.

ADOT says it is prepared to respond quickly to intense flooding, like these mudflows, which overwhelmed two culverts.

Crews removed thousands of cubic yards of earth and debris from SR 188 between mileposts 242 and 255. Other than damage to a guardrail, the highway appeared to be unharmed.

The human-caused Bush Fire burned 193,455 acres between June 13 and July 4, leaving behind a massive path of damage.

On Wednesday, the Tonto National Forest announced a new closure order because of potential flood hazards related to the Bush Fire. The restrictions start today, Friday, July 31 and remain in effect until March 31 or until rescinded.

Under those restrictions, the area burned by the Bush Fire is closed. Crews are installing gates on key roads to prevent public entry into high-risk areas, installing signage across the burn scar to warn the public of risks and treatment to protect FR 626.

“The Tonto National Forest recognizes that there are significant impacts to the public as a result of this closure. The closure order is a matter of human life and safety and it is important that the public remain out of restricted areas on the forest,” according to a release.

In a July 9 report, officials reported approximately 36,300 acres within the fire footprint are likely to experience a loss of inherent soil productivity in the next year because of erosion.

Unfortunately, there are no recommended treatments, such as mulching or seeding, to help protect the soil because of steep slopes in the area.

“Adhesion of mulch or straw to provide soil cover would likely be poor. We worked with the other resources to help identify areas where accelerated soil erosion may threaten human life and safety. Risk in these areas will be mitigated through closures and signage,” reported Robert Ballard and David Watson.

Gila County set up a sandbag station in Tonto Basin so residents could fill their own bags and protect their property.

The report notes “wildfire can significantly alter the hydrologic response of a watershed to the extent that even modest rainstorms can produce dangerous flash floods and debris flows.”

ADOT is responding to the potential for intense flooding by staging heavy equipment along SR 188 and nearby sections of SR 87 so work crews can begin clearing debris immediately after storms.

The mud and debris flow that occurred along SR 188 represents an ever-present possibility in burned areas.

Another recent example is flooding that devastated State Route 88 (Apache Trail) between Tortilla Flat and Apache Lake. A stretch of seven unpaved miles of that highway, between the Fish Creek Hill overlook and Apache Lake, remains closed indefinitely because of last year’s damage and the potential for more intense flooding out of the Woodbury Fire scar.

ADOT is exploring the potential for federal emergency funding to cover the cost of cleanup and repairs.