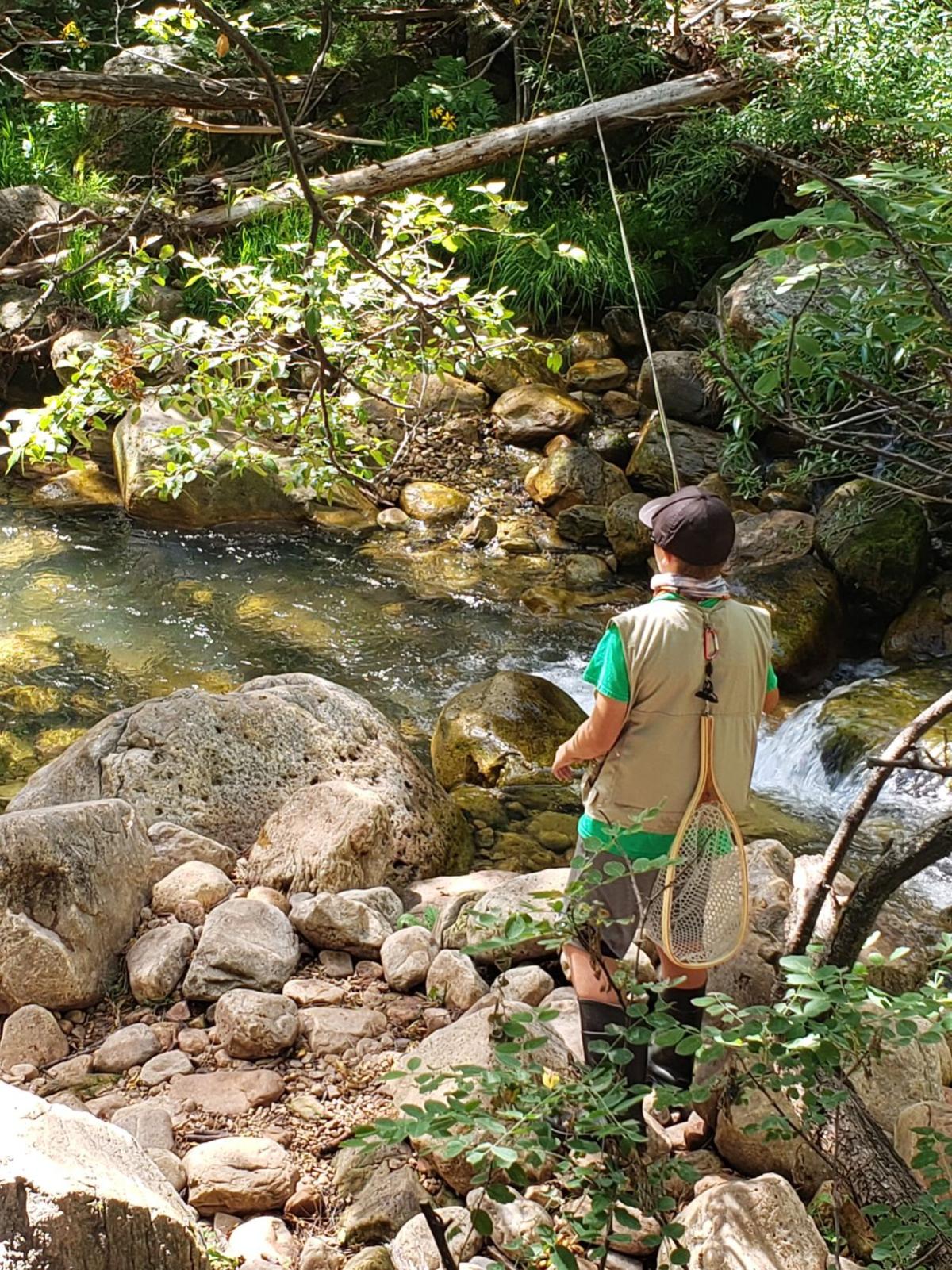 Owen Strogen uses a dry fly emerger rig on Canyon Creek. A fish grabbed the fly in the shade of the rock downstream. 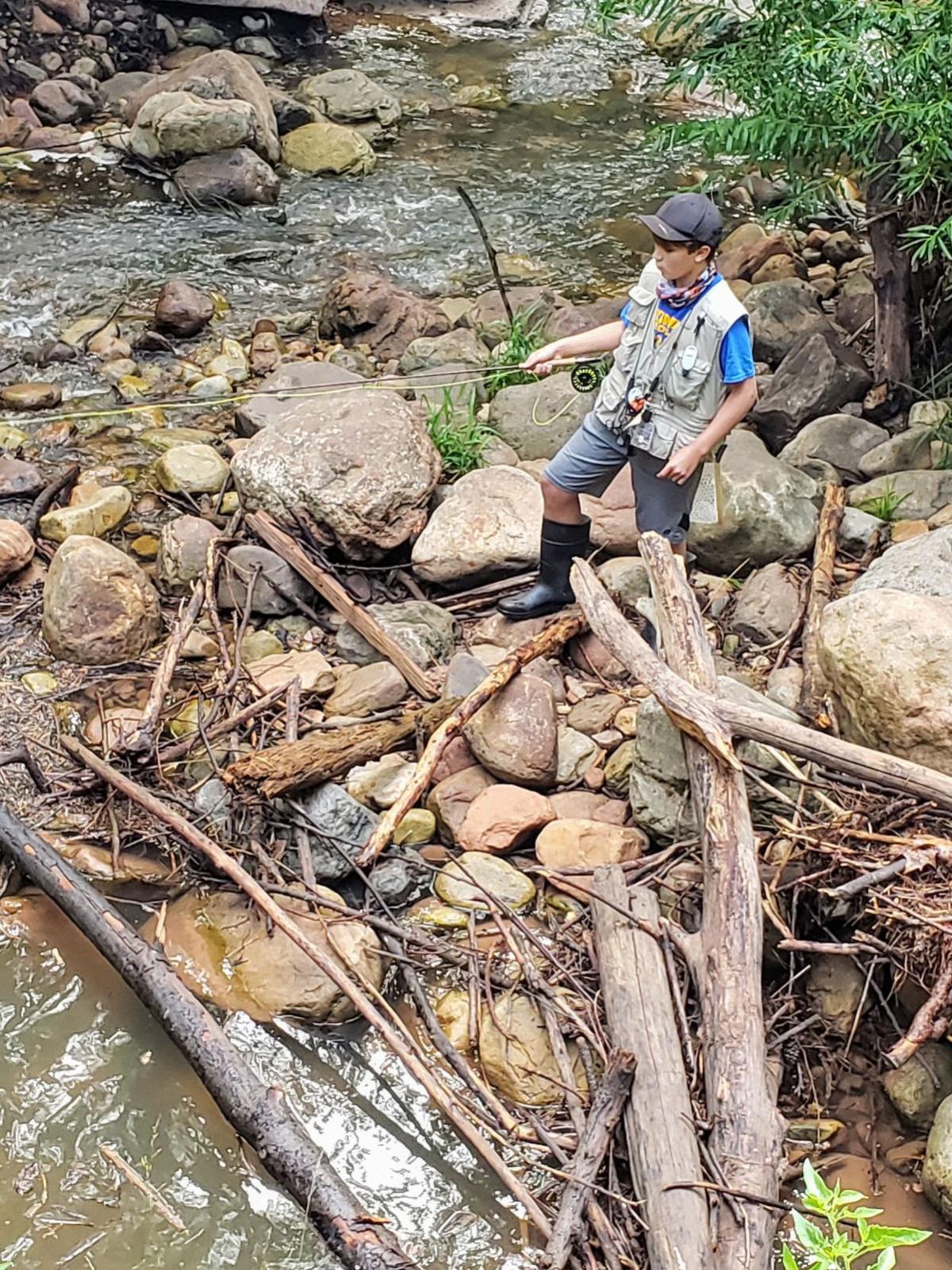 Owen is focused on his drifting fly in a favorite Tonto Creek hole. 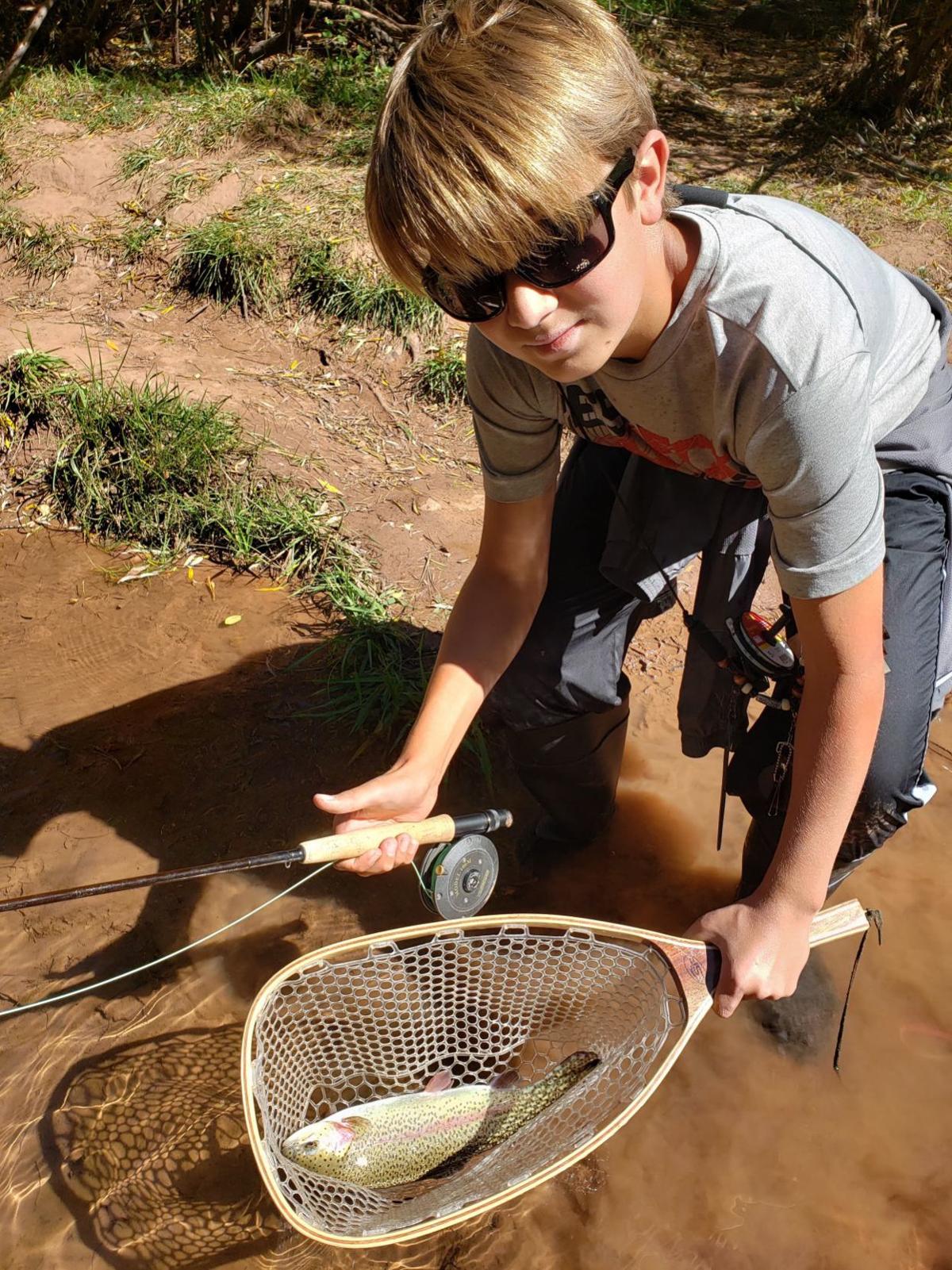 Owen Strogen getting ready to release a rainbow from Tonto Creek.

Owen Strogen uses a dry fly emerger rig on Canyon Creek. A fish grabbed the fly in the shade of the rock downstream.

Owen is focused on his drifting fly in a favorite Tonto Creek hole.

Owen Strogen getting ready to release a rainbow from Tonto Creek.

My oldest grandson, Owen, is 12 and already out-fishes me, as does his younger brother Ayden. They are both more skilled with a fly rod than I was at their age. We often fish at either Green Valley Lake or one of the Rim lakes.

Owen of late has wanted to venture into stream fishing and the challenges that presents to the angler. On our last trip to Tonto Creek, a week after the stocking of super-catchable trout in mid-October, he made a radical fly choice that really paid off.

He took off his indicator and wet fly/midge and tied on a purple woolly bugger. Then he put me in full guide mode, neatly eliminating the fly rod in my hand.

His plan was to cast upstream into the pool of fish and let the fly sink to just above their feeding level and begin to strip downstream. He was expecting a reaction strike as this big, tasty morsel was well within an easy grab of several trout.

He needed me because he had chosen an unweighted woolly bugger and the sun’s glare kept him from being able to know when the fly sank to the desired depth. Once it did, and I reported it to him, he began his line strip and pulled in fish after fish!

That kind of decision making comes from several years of success with a variety of flies. It also involves an awareness of fish behavior and a willingness to experiment when he was already doing pretty well with the set-up that he had on. I loved it.

It reminded me of my early fishing days under the tutelage of my Uncle Bud. He and I knew every pool and log jam on the creek we fished. I often thought I was fishing the creek alone, but it was uncanny how he would show up on the stream when I was there and check in to see how fishing was. I realized later that it wasn’t so much the fishing report that he wanted, but to be sure I was gaining my independence as a fly fisher.

He did a great job of covering up that primary reason for the check-in, because he always pushed my thinking on the stream, and I would concentrate on the latest fishing nugget from Uncle Bud.

On one occasion, when I wasn’t having much luck, he suggested a new technique. He said they were perfect for a skating spider.

He gave me a couple spiders and said to use a dry fly with oversized hackle and tail and drift it downstream. When the fly is in position, lift the rod so it skates across the surface in front of any trout looking for an errant bug.

As you would guess, that approach worked wonders, and I still carry a few skaters in my fly box for just the right situation.

That brings me back to Owen. He has seen me use some rather odd fishing rigs that work well, but are not your typical fly-fishing set ups.

On Canyon Creek, I showed him a dry fly dropper and unweighted emerger rig similar to Uncle Bud’s spider. Sometimes they pick up the dry, while often they grab the emerger just under the surface.

In any case, Owen out-fished me badly after a brief tutorial. And then, if that wasn’t enough, he added a catch and release wrinkle to the day that put it over the top.

Although we occasionally keep trout for dinner, on this trip to Canyon Creek and a later trip to Tonto Creek, Owen was very much in the catch and release mode.

He fully knows of the rather delicate nature of trout compared to the crappies, bass, and bluegills that he has caught at the Green Valley Lakes. His new release plan is brilliant. He decided that he would take a breath and work on the release of trout. If he needed a breath before the release was complete, he would give the fish a healthy “breath” by re-immersing the fish back into the water until his work was done.

When we fish streams, he is often working through fishing problems around the bend from me, but within shouting distance. He appreciates the opportunity for independence and especially loves catching fish I have missed.

It makes for some spirited ribbing in the car ride home and some very special fishing memories.