Madden Bollier holds the fish he grabbed with his bare hands before letting it go in a deeper pool. His parents used the experience to have an on-the-spot science lesson. 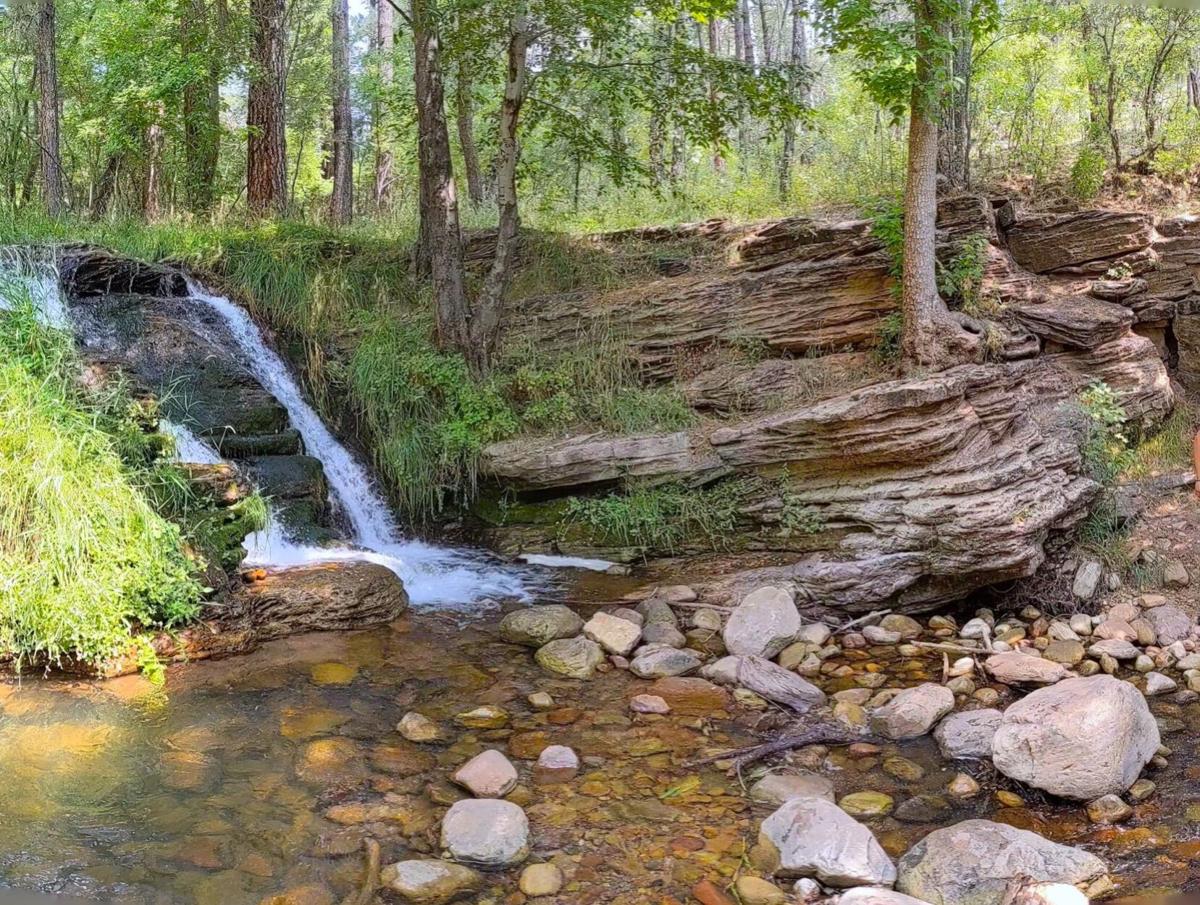 The pond where Madden saved the trout stuck between two rocks. 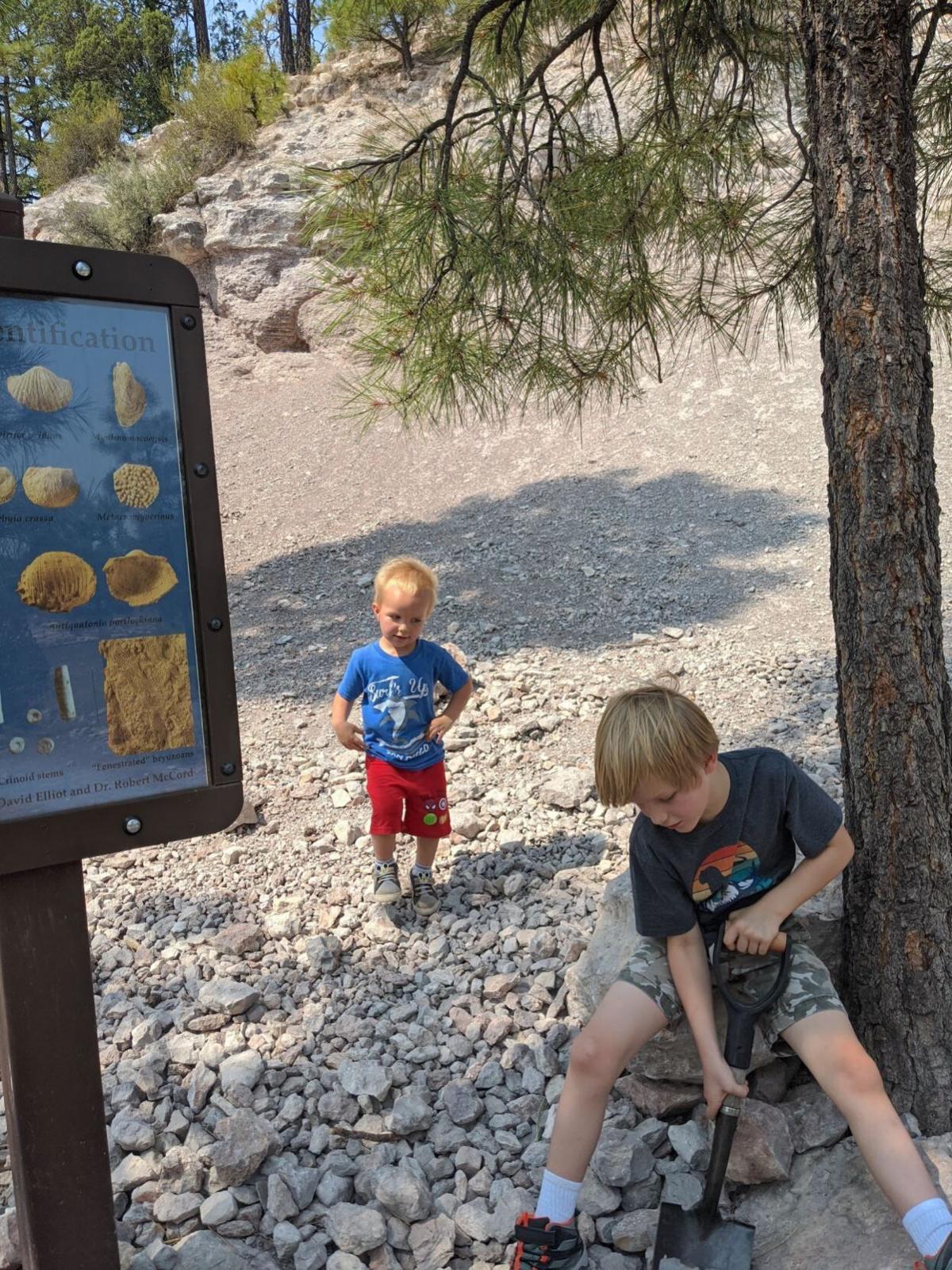 The Bolliers took a side trip to look for fossils at the Paleo site near Horton and Tonto creeks. Madden’s classmates called him the dinosaur kid while in school pre-pandemic. Madden’s little brother River looks on as Madden explores.

A family on a hike.

For Christine and BJ Bollier, a family hike offered an impromptu science lesson about fish, streams and how ecosystems work.

The pandemic convinced the family to take the plunge into home schooling for 7-year old, Madden. Prior to that, the Bolliers had flirted with the idea, but “I didn’t think we had the room,” said Christine.

In her mind, she thought it would require a room dedicated to schoolwork to put everyone in the mood to learn.

Then came the state shut down.

Weeks of distance learning demonstrated the Bolliers could do lessons on the couch, the patio or anywhere with a Wi-Fi connection.

“I learned I didn’t have to have a special room for school,” said Christine.

With that concern out of the way and facing continued concerns about the pandemic, the Bolliers decided to provide their son consistency.

So, they took him out of school. The Bolliers had Madden enrolled in Payson Christian School, but the same choice they made may account for the 10% decline in enrollment at Payson Unified School District this semester.

PUSD has decided to stick with distance learning until at least Oct. 12. The school board made the difficult decision after discovering Gila County meets only one of the three state benchmarks for returning to in-class instruction.

To prepare, the Bolliers picked the brains of friends who had done it and joined the Homeschool Families of Payson AZ Facebook page for support and social interaction.

“As a parent, I know it is so important to their development,” said Christine.

Making connections has proved difficult, though. The group has plans to do “playdates at the park every other week” but nothing consistent has evolved yet.

“It’s always uncomfortable to go into a situation when you don’t know someone,” said Christine.

More often, the Bolliers have Madden connect to peers through Facetime.

During the interview for this article, Madden video chatted with a friend who had moved to Texas. The two played a video game together. Some of the games have players build a world, others have the players accomplish a goal.

“Yeah, it’s not ideal (all the screen time), but he is getting together with his friends and building things,” she said.

The Bolliers have decided to blend several philosophies of education into their home-school experience, the unschooling, Waldorf and Charlotte Mason philosophies.

Christine said the underlying goal is “getting them to ask questions and engaging them” in exploring life, reading, writing and math.

“His math curriculum is hands on,” said Christine.

As part of the Charlotte Mason math curriculum, the family plays cards and builds things with tiles. Field trips are encouraged. When the Bolliers hit the money portion of the math curriculum, BJ’s job will provide a tour of the BVVA bank so Madden can learn “about checking accounts” and other money/math related topics.

But Christine said any family can ask for a field trip at BVVA — in fact, she hopes to organize a trip with other families.

“Learning takes place 24 hours a day,” she said. “It doesn’t have to look like a school day looks.”

During the less structured part of the day, Christine, Madden and his 2-year-old brother, River, do art, music, history, and field trips — basically anything River “can do while he’s awake.”

But Christine says it’s not all sunshine and roses. She gave no details, but acknowledged everyone has up and down days.

And that’s the philosophy the Bolliers have decided to take with home-schooling, be “open and make every opportunity” to “organically” let the learning evolve instead of “forcing.”

A hike by a stream provided just such a chance.

On one field trip to Horton and Tonto creeks, Madden found a trout stuck between two rocks. The trout would soon have expired because the falling waters had left it half out of the water. It was so weak, Madden could easily pick it up “with his bare hands,” said Christine.

After snapping a picture to prove what happened, his parents directed Madden to toss the trout into a nearby pond.

As the fish lay stunned on the bottom, Christine and BJ explained the fish might not make it because of shock. Then the fish started swimming sideways and Christine prepared to talk about death. Suddenly, it darted away refreshed and very much alive.

“That led to a conversation about how fish breathe underwater and how they have gills,” said Christine.

Madden loved the lesson. “I can’t believe this is school,” he said.

“Learning takes place 24-hours a day. It doesn’t have to look like a school day looks.” Christine Bollier

“I learned I didn’t have to have a special room for school." Christine Bollier