Mayor Tom Morrissey (center) and Councilor Jim Ferris (right) share a laugh with town contract attorney Justin Pierce during a discussion over whether or not the council should remove two codes that implement Propositions 401 and 402. 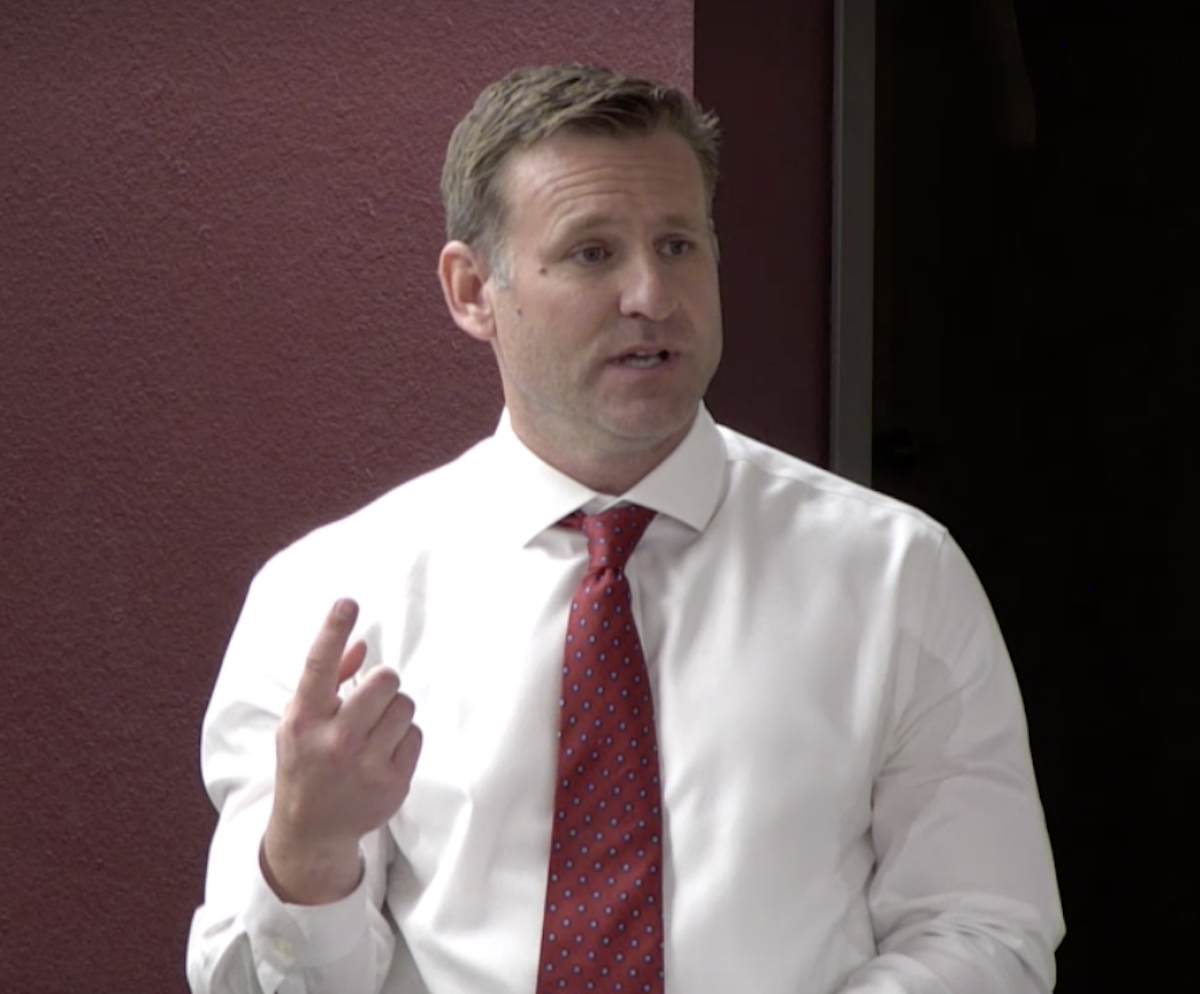 Payson's Town Contract Attorney Justin Pierce went over the various reasons for removing the code or not during the March 25 town council meeting. The council decided to leave everything as is. 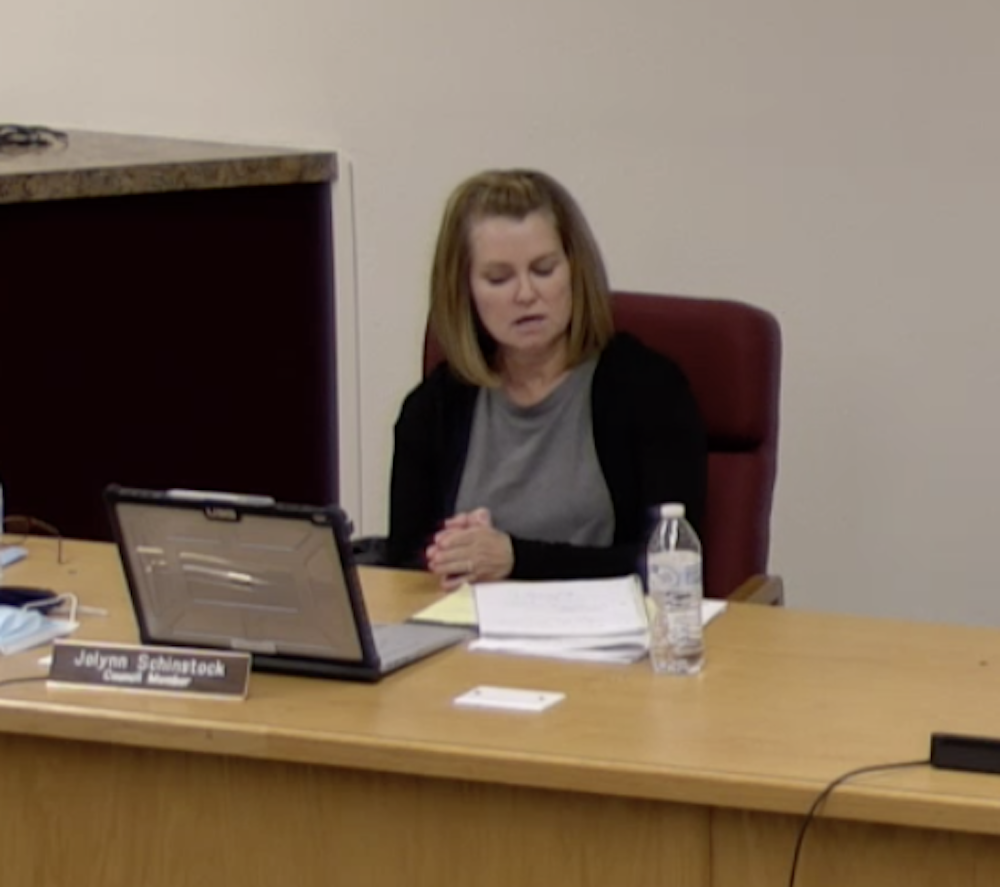 Faced with the threat of a lawsuit, during its March 25 meeting, the Payson Town Council decided to keep two town codes that seek to implement Propositions 401 and 402, passed by the voters in 2018.

The propositions require the council to put to a vote of the people any bond or contract debt that exceeds $1 million or when the town wants to sign a lease agreement of town property that lasts longer than three years. The question of whether the council can implement these laws, or if they lack the authority, has stirred a vigorous debate across two councils and several meetings.

The propositions first went to test last September when the council purchased two fire engines that totaled $1.4 million. At that time, the council decided the town code was null and void because the Arizona Constitution did not provide the legal permission to implement the laws.

Now, with a partnership looming between the Rim Country Educational Alliance and the town for a park, the council decided to clean up the town code. But this issue has split every council that has discussed it. Without a court judgment or state legislative action, it’s hard to figure out what to do when you don’t have specific direction from the state’s Constitution.

“Just because they didn’t say in the Arizona Constitution that you can do this … that doesn’t necessarily mean you couldn’t do that, and to me that is kind of confusing.”

Something no one on the council disagreed with.

Town Contract Attorney Justin Pierce negotiated between the two factions during the meeting spurred by a letter from Timothy A. DeSotto, a lawyer who claims to represent the political group Transparent Payson.

Transparent Payson championed Propositions 401 and 402 to thwart a partnership between the town and a hockey prep school that would have improved Rumsey Park.

The council quickly established Transparent Payson ceased to exist after the 2018 election, so it cannot sue the town, but someone else could, said Pierce.

“According to the lawyer’s letter to you, his position is that a council … cannot repeal something that was passed by the voters — and that’s the Voter Protection Act,” said Pierce.

Pierce then explained that the League of Arizona Cities and Towns has not found specific language in the Voter Protection Act that applies the voter suppression law to cities and towns. Rather, the law applies only to the Legislature, but “it’s an open question,” said Pierce — which means someone from the public could sue the town to clarify the issue.

On the other side of the issue, Pierce said the town would probably lose a lawsuit if the council implemented 401 and 402 by taking a $1 million purchase to a vote of the people because “that is not a power that you have been granted under the Constitution.”

He suggested approaching the Arizona Legislature to ask them to “grant specific authority for councils to” implement the codes and take purchases or contracts over $1 million to a vote of the people.

Mayor Tom Morrissey said to remove the codes “flies in the face of the principles that our country is built on, government governs by the consent of the people.”

Which spurred Councilor Jolynn Schinstock to remind the council that the purchase of the two fire engines means “the precedent has already been set” that the council cannot enforce the town code that relates to Propositions 401 and 402. She said if the council applied the 401 and 402 town code to a future contract or purchase, “I feel like that is selective enforcement and there’s no verbiage to allow for those kinds of exclusions.”

Morrissey said the fire engines were a necessary public safety expense, so it was proof “we live under common law and common law for this is common sense.”

Vice Mayor Chris Higgins said he supported the legal council’s interpretation that the council could not implement the town codes until adjudicated or a new law passes. But he followed that with, “I find it comical that the word of the people was ignored in regard to those propositions and a million dollars was spent (on fire engines.)”

Ferris made a motion to keep the town codes and the council unanimously voted to support that request.

“According to the lawyer’s letter to you, his position is that a council…cannot repeal something that was passed by the voters – and that’s the Voter Protection Act." Justin Pierce

“I feel like that is selective enforcement and there’s no verbiage to allow for those kinds of exclusions.” Jolynn Schinstock

“We live under common law and common law for this is common sense.” Tom Morrissey