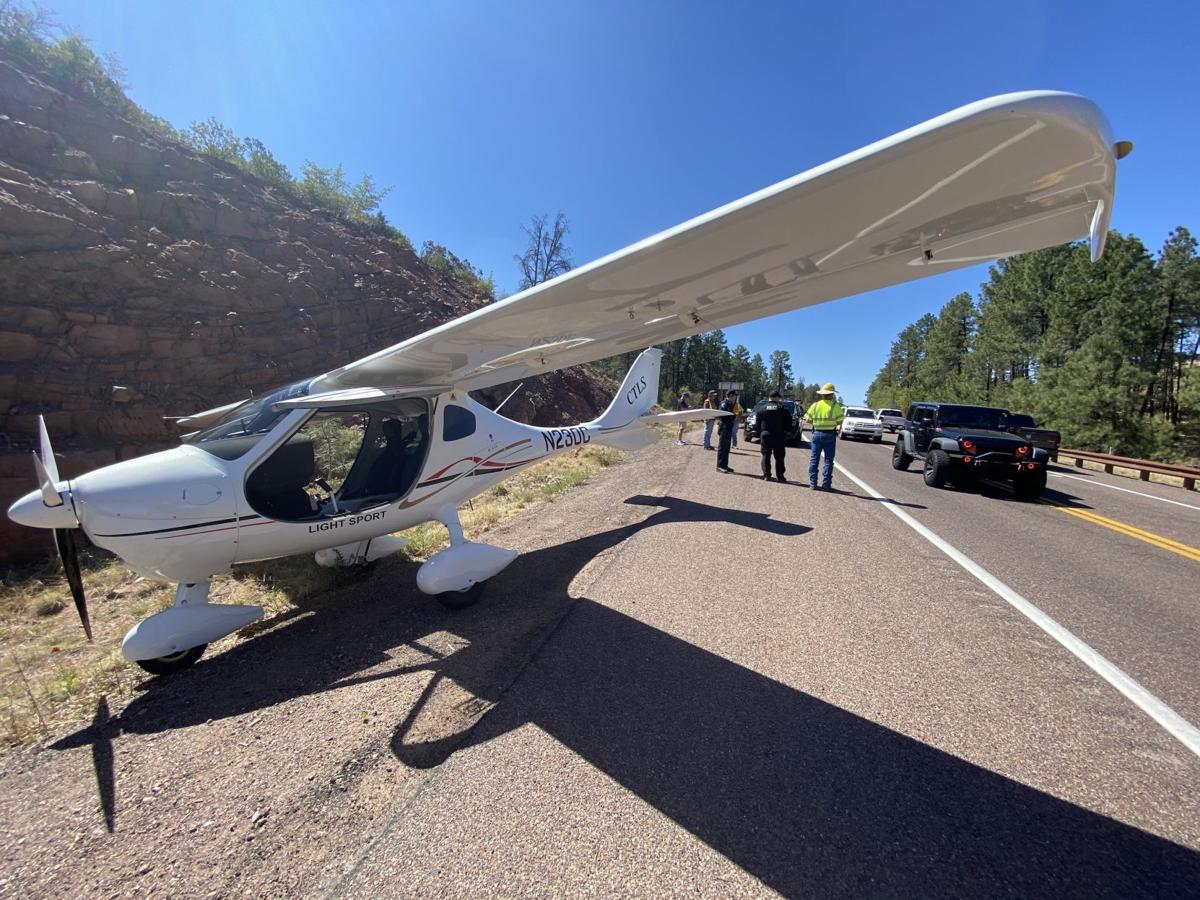 Richard Angrom landed his plane on the highway north of Home Depot on Sunday, May 30. His fuel gauge said he had another hour of flight left. 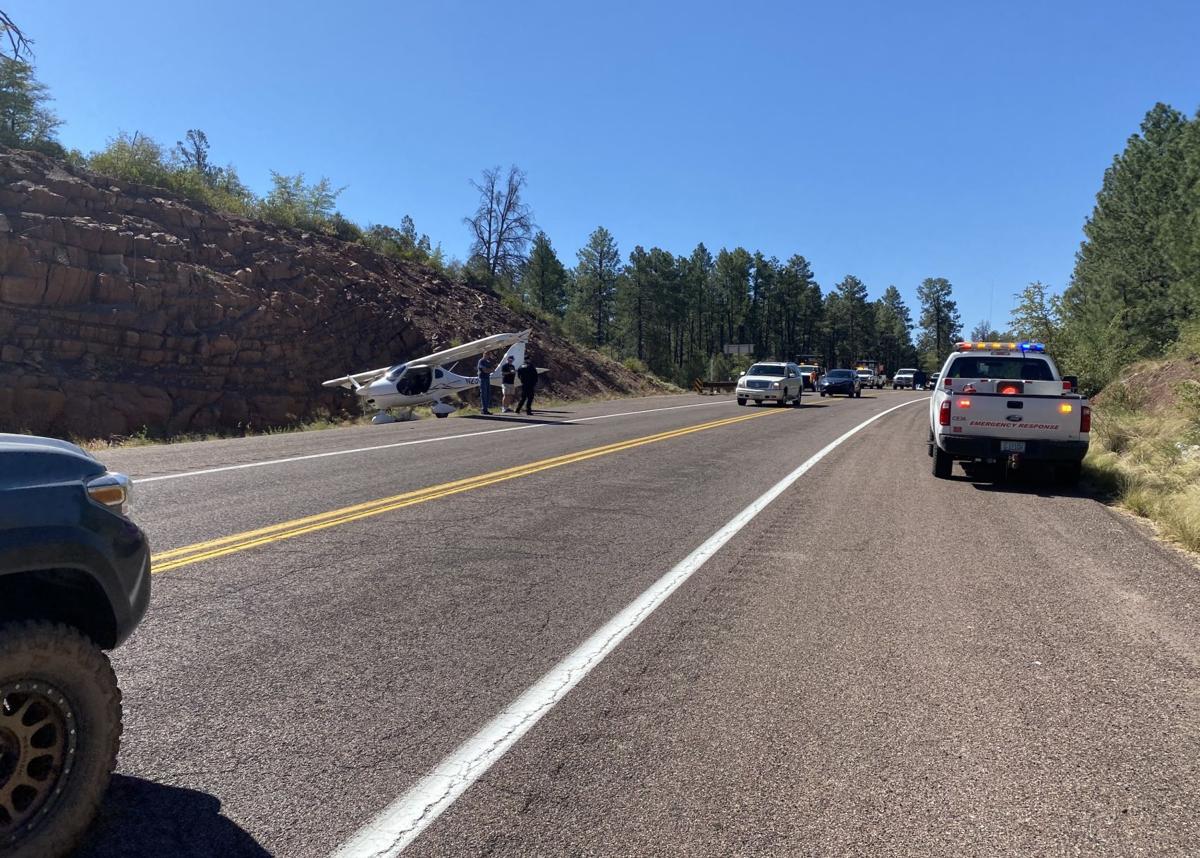 After gliding to a landing with no engine support, Richard Angrom pulled to the side of the road to let traffic continue to flow. 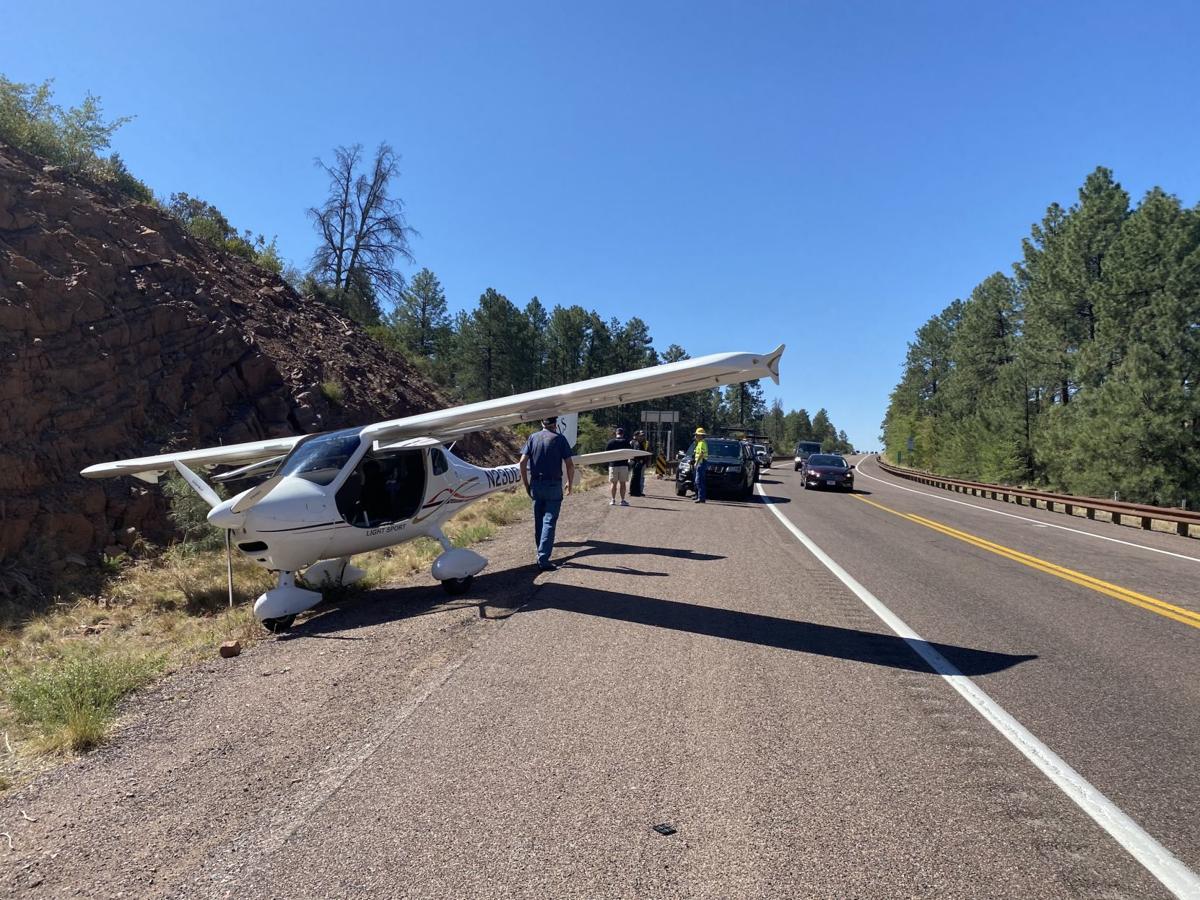 Richard Angrom walks back to speak with Payson Police, unfazed by his emergency landing. He and his passenger Trent Collicott (also a pilot) had spent an hour on a sightseeing trip when their engine cut out as they attempted to land at the airport. The situation confused the pilots because the gas gauge indicated another hour’s worth of fuel was in the plane. By 11 a.m. officials from PPD and ADOT refueled the plane and it left the scene under its own power.

Richard Angrom learned if you’ve got to make an emergency landing on the highway, best to do it in Rim Country.

On May 30 at 10 a.m., Angrom and his passenger Trent Collicott had to make an emergency landing on Highway 87 north of Home Depot.

“We had been flying over an hour and we had an hour left, according to the gauge, when the engine cut out,” wrote Collicott on the Roundup’s Facebook page.

But as Angrom lined up to land at the Payson Airport, the engine coughed and sputtered — like it was running out of gas, Angrom told the Roundup during an on-scene interview.

Angrom’s instruments said he still had five gallons of fuel — enough to stay in the air another hour. But the sputter of the engine of the tiny, brand new, $180,000 plane told a different story.

“I thought, I’m not going to take a chance,” he said. The Payson Airport sits on a mesa and he wasn’t sure he could maintain enough altitude.

So, Angrom found the closest place to land — a stretch of highway north of Home Depot with a wide shoulder. As the unflappable pilot settled on the risky landing on the busy highway at the height of the Memorial Day weekend, the engine stopped.

Now in a full glide, Angrom lined up on the highway — using his flaps to drop down onto the center line. The tiny single engine plane with barely enough room for two came to a stop within 100 feet.

“The cars saw what I was doing and got out of the way,” he said, marveling at the cool-headed courtesy of the people who pulled to the side of the road at the remarkable sight of the tiny plane dropping silently out of the sky.

Payson police and ADOT personnel promptly arrived for traffic control. Fortunately, Angrom had concluded his powerless landing by pulling his plane well to the side of the road, giving cars plenty of room to pass.

He speculated that either his gas gauge didn’t work properly or the line that pumped fuel from the tank in one wing wasn’t working — so the engine couldn’t get to the fuel in the second wing tank.

Angrom has been a pilot for 21 years and regularly makes the 55-minute flight between the Valley and Payson. But this Light Sport plane is relatively new to him; he bought it in December.

Ultimately, ADOT and the police decided the quickest way to clear the highway was to get Angrom more gas.

Angrom filled his tank and police briefly shut down the highway in both directions.

Undaunted, Angrom fired up his engine, taxied back out onto the center line and headed briskly downhill in the steep stretch about halfway between Home Depot and East Verde Park.

A moment later, he was airborne — and heading for the airport — roughly an hour after his unconventional landing on a crowded highway.

Angrom’s just glad he picked a crowded highway right here in Rim Country, rather than down among the harried flatlanders.

“In Maricopa, they probably wouldn’t have given me the space. Down there, when you turn on your turn signal, they speed up.”