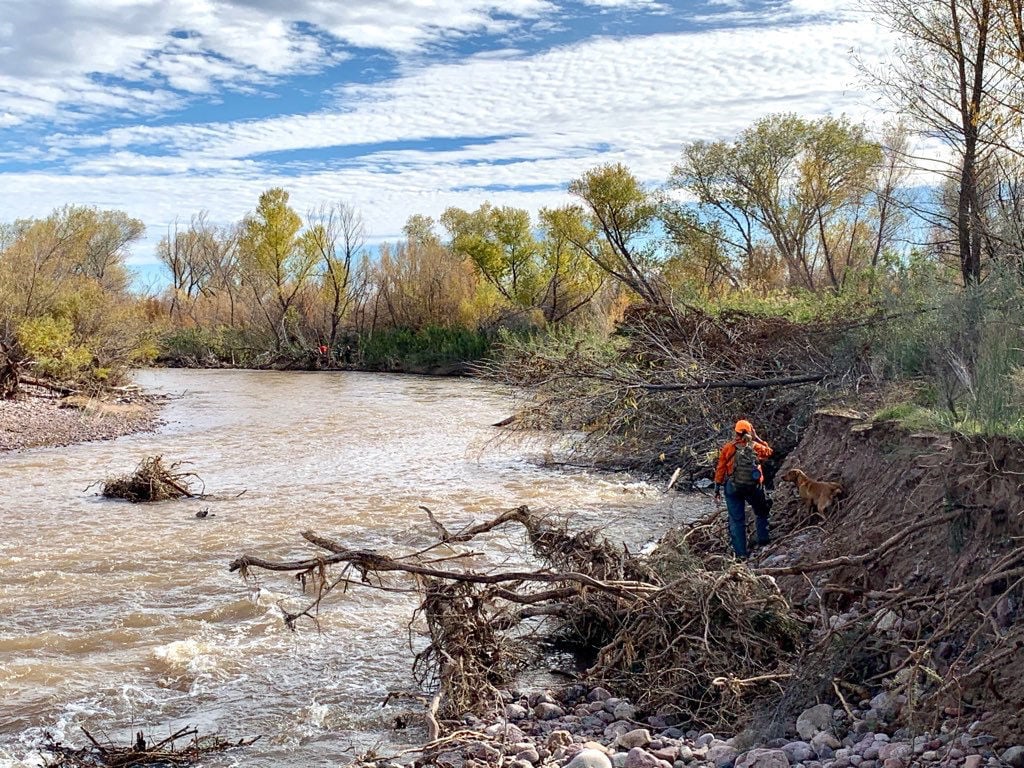 Margaret Johnson and her search dog Lucy, who is trained to sniff out human remains, look for the body of a missing White Mountains girl, who was swept downstream Nov. 29. Her presumed death, along with two other children, has sparked talks of building a bridge across Tonto Creek. 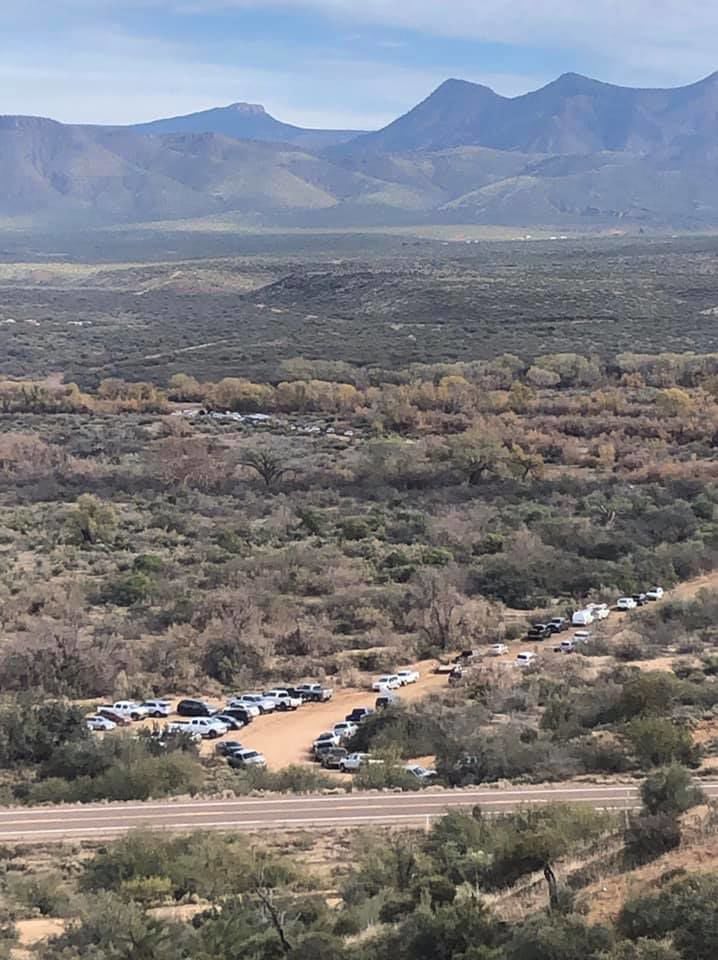 Tonto Basin resident Janet Cline snapped this picture of volunteers parked in a line along roads near Tonto Creek on Dec. 4. The deaths of three children have generated renewed calls for a bridge to span the creek.

Margaret Johnson and her search dog Lucy, who is trained to sniff out human remains, look for the body of a missing White Mountains girl, who was swept downstream Nov. 29. Her presumed death, along with two other children, has sparked talks of building a bridge across Tonto Creek.

Tonto Basin resident Janet Cline snapped this picture of volunteers parked in a line along roads near Tonto Creek on Dec. 4. The deaths of three children have generated renewed calls for a bridge to span the creek.

The drowning of three children in Tonto Creek over the Thanksgiving weekend has renewed calls for a bridge in Tonto Basin.

Since at least the 1970s, the community has discussed the need for a bridge so the residents on the east side of the creek can safely cross when the creek swells.

But because of the $20 million price tag, efforts to build a bridge have stalled year after year.

Gila County Supervisor Tommie Martin, speaking at the Rim Country Regional Chamber of Commerce luncheon Tuesday, said she worried it would take a tragedy to get the attention of state and federal officials.

And now that tragedy has occurred.

Three White Mountains children died when the military-style vehicle they were riding in got stuck in the swollen creek Nov. 29. Four other children and two adults in the vehicle survived. As the Roundup went to print, the body of Willa Rawlings was still missing.

“My heart goes out to the family. I was briefed by the sheriff yesterday on the situation. And we’re going to look at infrastructure needs,” said Gov. Doug Ducey. “The first thing I want to say is, when we do have inclement weather, if people would heed the warning from authorities, we’ll have a much better situation, and we’re going to look at the infrastructure needs of the state.”

Gila County Supervisor Tim Humphrey and State Sen. Sylvia Allen both attended a community meeting in Tonto Basin Tuesday night to talk with residents about the tragedy and the need for a bridge.

It will cost roughly $21 million to build a bridge. The county already has a design complete and has secured property on the west side of the creek in Punkin Center where the bridge would start.

Martin said they have put in for every grant imaginable and she has visited with several national transportation chiefs throughout the years advocating for funding, but so far, have gotten nowhere.

She said it could take an earmark.

“For people like Gila County it takes an earmark to even pay attention,” she said. “We have few people who live across there and we have a $20 million bridge that needs to be built. We aren’t going to get it through regular channels.”

Roughly 1,600 people live on the far side of Tonto Creek, which floods and cuts off access several times a year.

On a Tonto Basin Facebook page, Allen posted, “The tragic lose (sic) of three children due to the flooding of the Tonto has made me so angry over the fact that a bridge can’t be built due to the many federal regulations and agencies that have to be delt (sic) with.”

But the $20 million cost has posed a far bigger problem than meeting environmental requirements, according to officials.

Payson Roundup archives show residents of Tonto Basin have talked about building a bridge over Tonto Creek since at least the 1970s.

By 2003, a Roundup article titled, “Renzi gets funds to start Tonto Creek bridge,” reported Congressman Rick Renzi had secured $150,000 for an environmental study.

Two years later, the bridge inched one step forward with the help of Congress when the Transportation Equity Act of 2005 allocated $3 million for the Tonto Creek bridge design.

However, that money had strings attached.

The money would not go toward the construction of the bridge. Rather, it paid the Army Corps of Engineers for planning, which included surveys, mapping, engineering and design, structural analysis and public hearings.

In 2006, a public meeting in Tonto Basin focused on three sites for a bridge.

By 2008, one resident, Roy Goodwin, suggested a “Sky Walk” gondola system, rather than a bridge.

In 2009, months before the transportation bill authorizing the spending was set to expire, the Arizona Department of Transportation and Gila County signed an agreement to design a bridge near Punkin Center.

It was a huge move forward only possible because Congress had lowered the matching funds portion from 20 percent to 5.7 percent. The county could afford $170,000 (“A bridge at last for Tonto,” Roundup, April 2009).

Yet eight months later, talks continued with no money or plans for a study started.

A year and a half later, a $2.8 million SAFETEA-LU paid for plans and an environmental assessment study for two bridges. The one near Punkin Center and a second bridge over Oak Creek, a tributary of the Tonto.

Oak Creek offered an alternative evacuation route to the Punkin Center bridge. (“Bridge over Tonto Creek ‘closer than it has ever been,’” Roundup, December 2011).

By 2012, Gila County had a shovel-ready set of plans to build a 1,980-foot bridge across Tonto Creek and a 147-foot bridge over Oak Creek — it just lacked the estimated $20 million to pay for construction.

But funding only came through for the Oak Creek bridge.

By 2015, the county unveiled the Oak Creek bridge with the final price tag of $1.9 million.

The county promised to continue to look for ways to fund the larger bridge.

But progress has languished.

“We get turned down year after year because of the number of people that live on the other side of that creek,” Martin said. “We just get nowhere.”

Martin encouraged audience members at the luncheon to contact representatives and demand funding.

Ducey said funding the bridge would be considered as they draft the upcoming budget.

“Right now, we’re in a very positive situation as a state. Our economy is booming, even given the problems, temporary as they are. We’re in a position where we’re going to invest in infrastructure,” he said. “But I want to look at all of the priorities before I present them in the budget. You’ll be seeing the budget soon enough. It’s something we’re working on. And it’ll be ready in early January.

Allen says she is working on a solution.

“Many years now the people in Tonto Basin have endured the flooding because the Tonto is out of its historical river bed due to the foliage that needs to be cleared. It is just plain wrong that we can’t fix this mess. Well, I am going to try to do something,” Allen said.