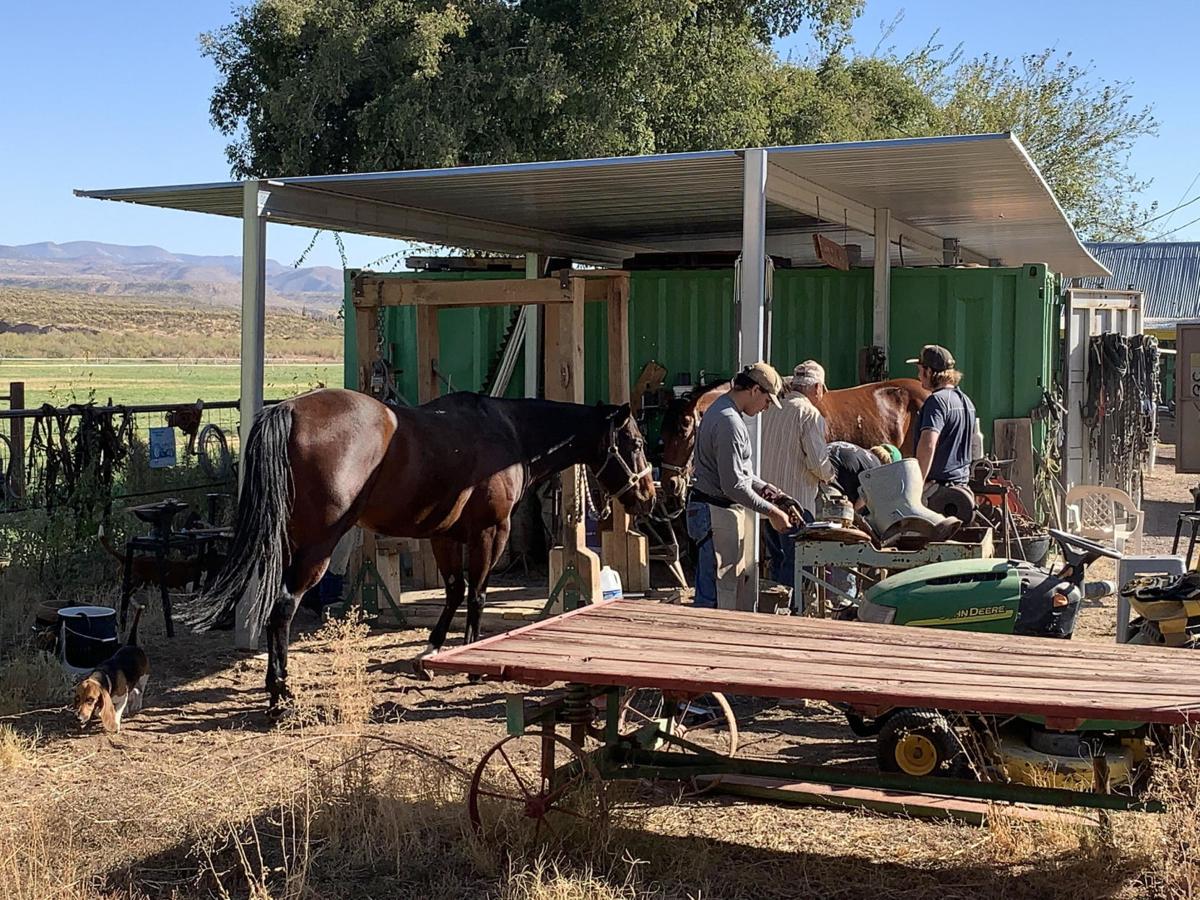 Hands on work during the horseshoe clinic at the Brown Ranch in Tonto Basin run by George Goode and the Native American Horse Education Foundation. 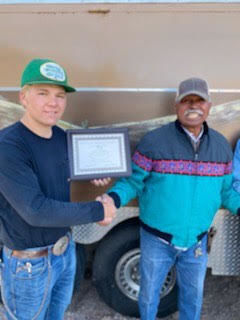 George Goode (right) presents a certificate to a rancher after two months of training at the Brown Ranch in Tonto Basin. 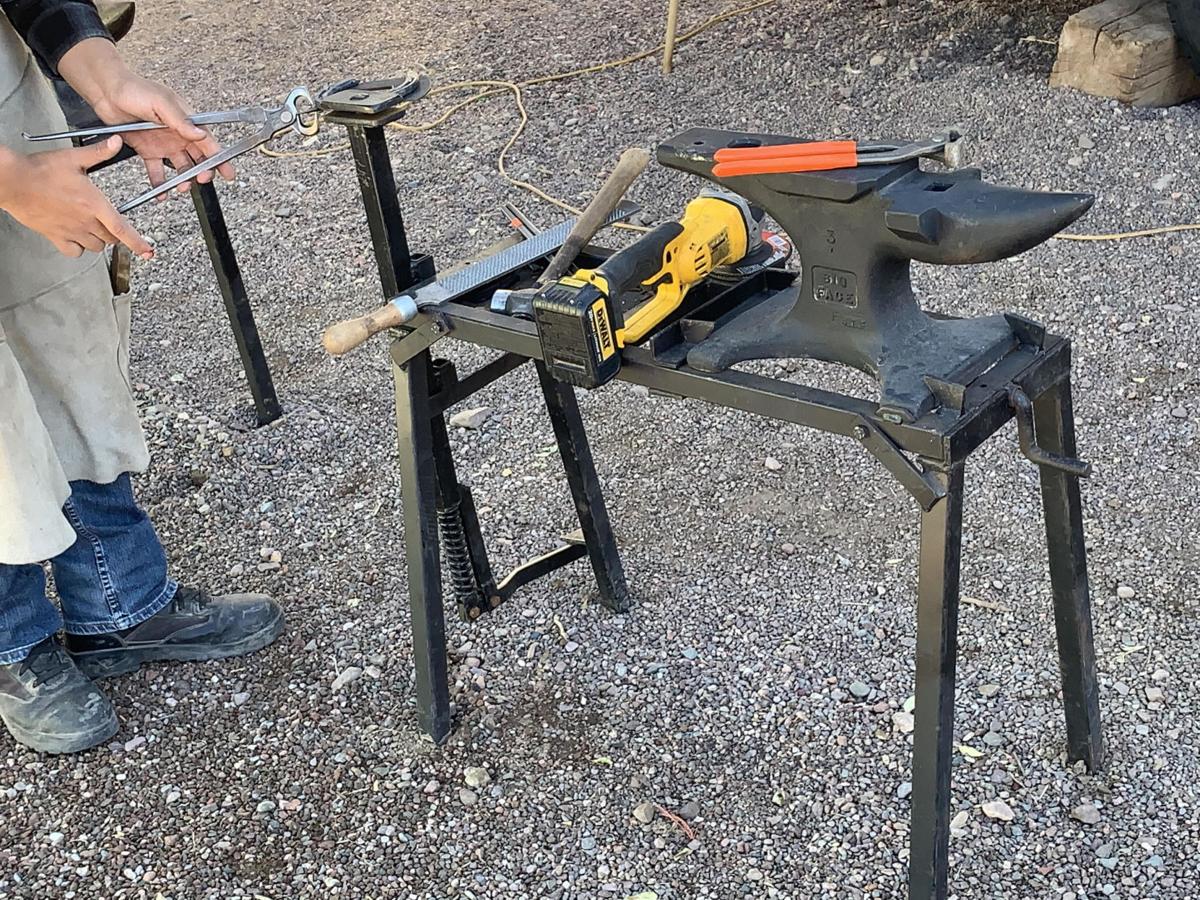 A forge used to create shoes unique to each horses' need. Each horse has a specific issue starting at their feet. If they do not have the correct shoe on their foot, they can go lame. 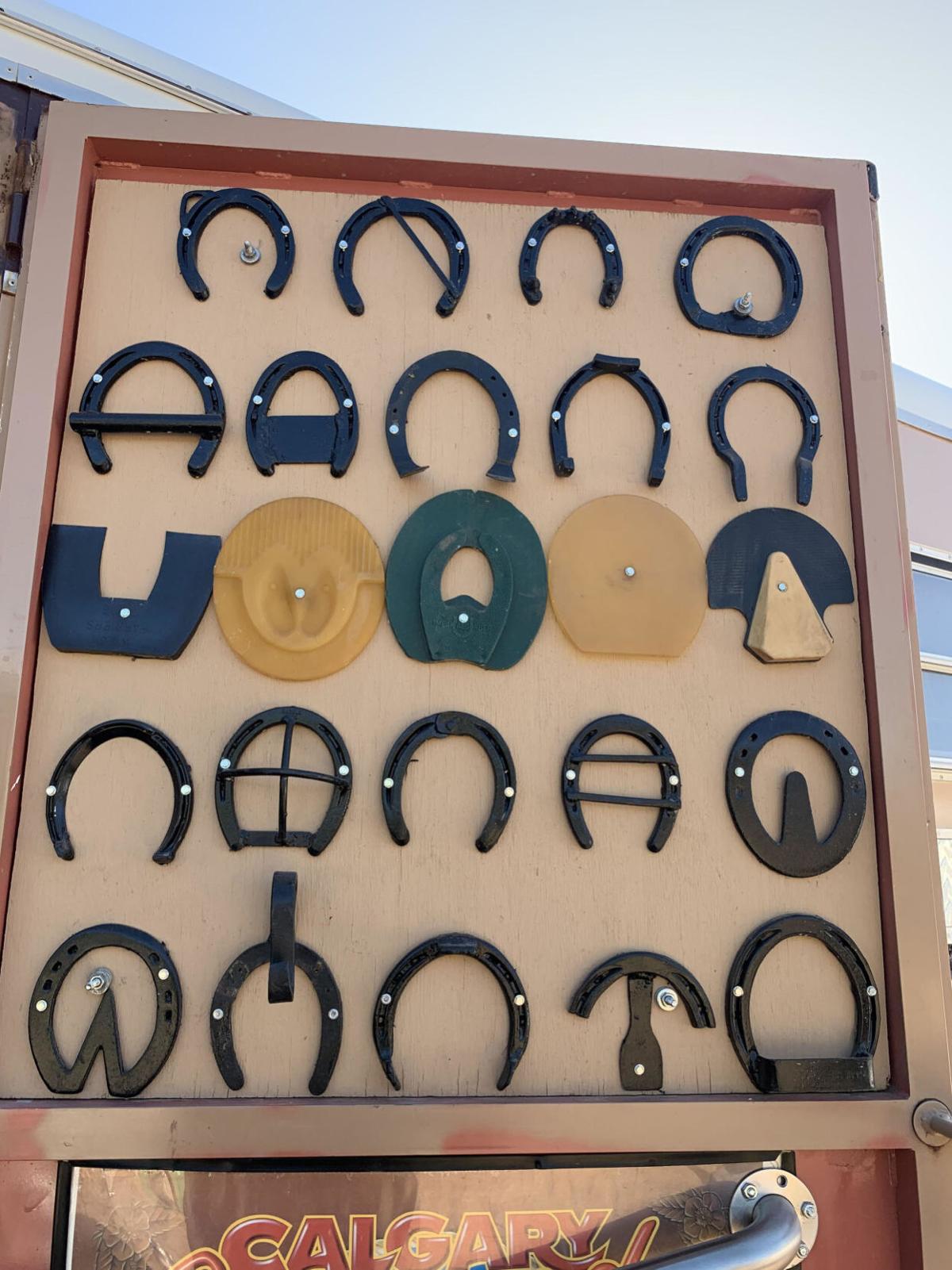 The wall of examples of horseshoe orthotics George Goode can create for whatever unique need the horse has. 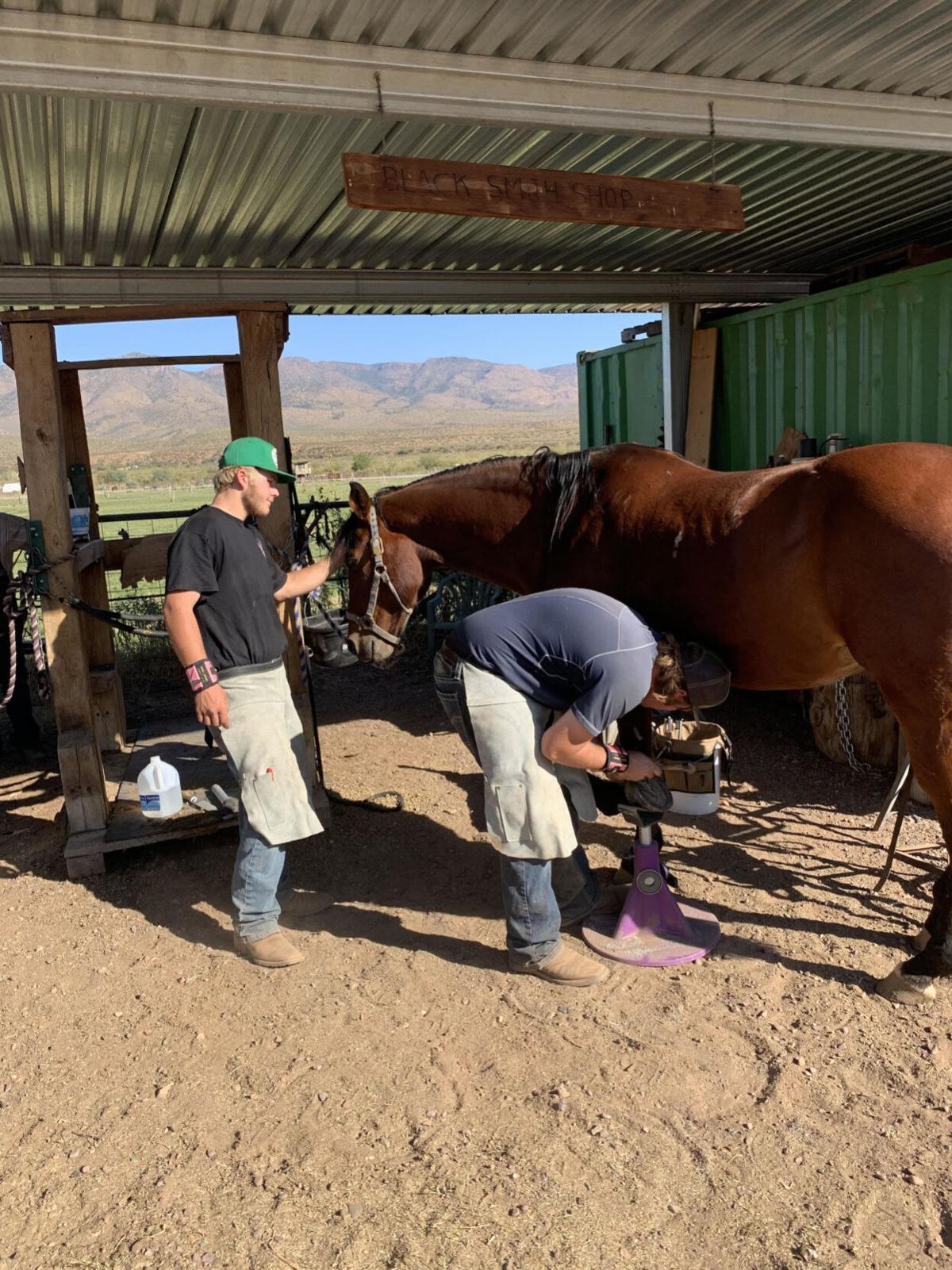 Practicing the skills they learned under George Goode.

George Goode has a passion for the horses that carry his people.

The part-Zuni master of horseshoeing knows that the willingness of the horse to bear a rider has a complex price for the horse — which means those who would ride have an equally deep-rooted obligation for that service.

So, his mission in life is to help his people while restoring the balance between horse and man.

And that means he welcomes help from people like Tonto Basin rancher Lori Brown.

Brown met Goode after asking the Tucson School of Horseshoeing how her sons could learn the art of horseshoeing. She discovered the Native American Horse Education Foundation could turn her sons and others into expert farriers.

The mission goes from the broad goal of “furthering the self-sustaining nature of the American Frontier,” to reducing the number of neglected and abused animals.

The man behind that mission has quite the story of his own.

Balance between reservation and the outside world

Horses played a key role, but he got frustrated when the family’s horses continued to come up lame even though they changed the shoes regularly.

When a horse goes lame, “it’s like he needs crutches or is walking on eggshells,” said Goode. “They start stumbling. They start getting crippled with quarter cracks in their hooves.”

They cannot be ridden. Sometimes the damage is permanent, said Goode.

Since no one would answer Goode’s questions about what made the horses lame, he decided to attend Cal Poly University to study animal husbandry.

There he studied the anatomy of a horse from the foot up only to learn that every horses’ foot is different.

He decided the best way to apply his newfound knowledge was to set up the Tucson School of Horseshoeing. He did that for 30 years. Along the way, he developed a line of horseshoe orthotics.

He also developed a way of looking at a horse that recognizes when they don’t grow a heel, or one leg is slightly longer than the others.

“No horse is perfect,” he said.

But Goode, had a deeper goal — empower the youth on reservations.

Goode understands how the cycle of poverty and lack of opportunity keeps those who remain on the reservation chained to a hard life.

His father had deep connections to the Zuni reservation. Then Goode married a Hopi woman who grew up on a Mesa.

Yet he also respects a native’s choice to live on a reservation. He knows of those who tried to move to the outside world only to return to their roots and the old ways, which includes horses. The Zuni have culture roots that go back 3,000 to 4,000 years, but the arrival of the modern horse had a huge impact on a host of Native American groups.

“The natives were founded with horses,” he said.

Even today horses provide transportation and serve as workers on the ranch.

“A lot of them have sheep and have to ride for miles to gather their sheep,” he said.

But Goode said no one taught them shoeing a horse prolongs their ability to carry riders and avoids causing unnecessary pain to the horse.

“The natives are behind us in their knowledge about problems occurring with the horse’s feet,” he said.

How man unbalances the horse

Not many know, but horses need metal shoes because of the impact of carrying a rider.

“The weight of the rider wears the horse’s foot away faster than his foot grows so they need a shoe,” said Goode.

Normally, a horse’s weight naturally wears away the quarter-inch of hoof that grows each month, leaving the feet healthy and pain free.

But add the 100 to 200 pounds of a human rider and the hoof wears down too quickly, exposing delicate inner areas. This can cause the horse to go lame.

If shod, a horse can go for about two months before it needs to have its hooves clipped and shod again to avoid problems.

There’s a long history of Europeans and Asians caring for their horses’ feet, said Goode.

“Genghis Khan made sandals for them out of leather, so they could ride the horse longer before it wore out. The Romans made shoes out of a sandal for the horses’ hoofs. They had leather straps across it,” he said.

Goode understands when natives first came across horses, they realized horses went lame after a while. At the same time, they never learned about shoeing a horse. Nor did they have the capability with their nomadic lifestyle to learn to blacksmith. So they cultivated huge herds. This allowed them to frequently trade out their horses, said Goode. This required lots of space and access to great grasslands to nurture their large herds.

Once the government herded the tribes onto reservations, horses suffered as they moved into corrals. Their hooves grew with no natural control from running free.

“Once they got really long, they would run them in the rocks and chip it off,” said Goode. “That is really abusive, but they didn’t know any better.”

Which breaks his heart.

“They’ve always loved their horses. If you don’t know … you don’t know,” he said. “They are not trained. They don’t know how important it is. This is a really critical service.”

Many on the reservations don’t have enough to keep food on the table, much less hire someone to shoe their horses.

This creates a crisis for families who rely on horses for work and transportation.

“They have cattle, they have to have to round them up,” he said.

Each year, Goode hopes to raise enough money to offer a mobile horseshoeing clinic on reservations throughout the states. The clinic enables him to teach young Native Americans how to care for their horses.

He’s hobbled along with funding for his non-profit for the past 15 years, but it’s getting harder and harder to find the money to pay for a clinic. It costs some $8,000 per student for the two-month course, including staffing, equipment and supplies.

He does fund some of his work on the reservations by charging a nominal fee for his students to shoe horses. Families bring horses from miles away to receive service. It helps to spread the word about what he does.

Goode has seen hopeful results from his work, such as pride in the eyes of those on the reservation who learned to care for their horses. Not only pride in their horse, but themselves.

If they choose to go beyond Goode’s basic clinic to learn the art of corrective shoeing, they can get certified. Certification gains them a trade that will increase the wealth and welfare of the tribe.

But here’s where that gets into tricky cultural waters. Goode says if he doesn’t offer his clinics for free, he doesn’t make an impact.

“Here’s what actually happens. When the natives learn a trade, if they have to pay for it, they won’t give it away,” he said.

He hopes training young people in the art of horseshoeing will prompt them to pass the knowledge along — protecting horses and families alike. But that takes layers of knowledge.

“They don’t know the different types of shoes or the medial lateral balance,” he said. “To get that you would have to go to school. Every horse has to be shod differently. A hoof gauge can determine the angle. It is very scientific,” he said.

Most horse shoers learned the craft from a family member or friend.

Goode brings a wall of horse prosthetics to his clinics. He needs at least 10 students to make the clinic cost effective, which includes contributions to NAHEF.

“Every horse has a different pastern — that is between the hoof and his fetlock,” said Goode to explain the numerous horse’s foot bed inserts.

Some horses grow a crooked hoof. Others don’t grow a “heel.”

“Their feet grow like a fingernail,” said Goode, “If one side goes higher, that puts the horse on a tilt.”

This affects the leg tendons and bones, ultimately affecting the horse’s back. By that point, the horse is lame and probably cannot be ridden anymore.

Just like the clinics Goode teaches on the reservation, he taught the 18- to 35-year-old students at the Brown ranch about the “anatomy of the horse, forge welding, hot shoeing, corrective shoeing and making shoes from bar stock,” he said.

Restoring balance and repaying an ancient debt both to the horse and to the humans who care for them.