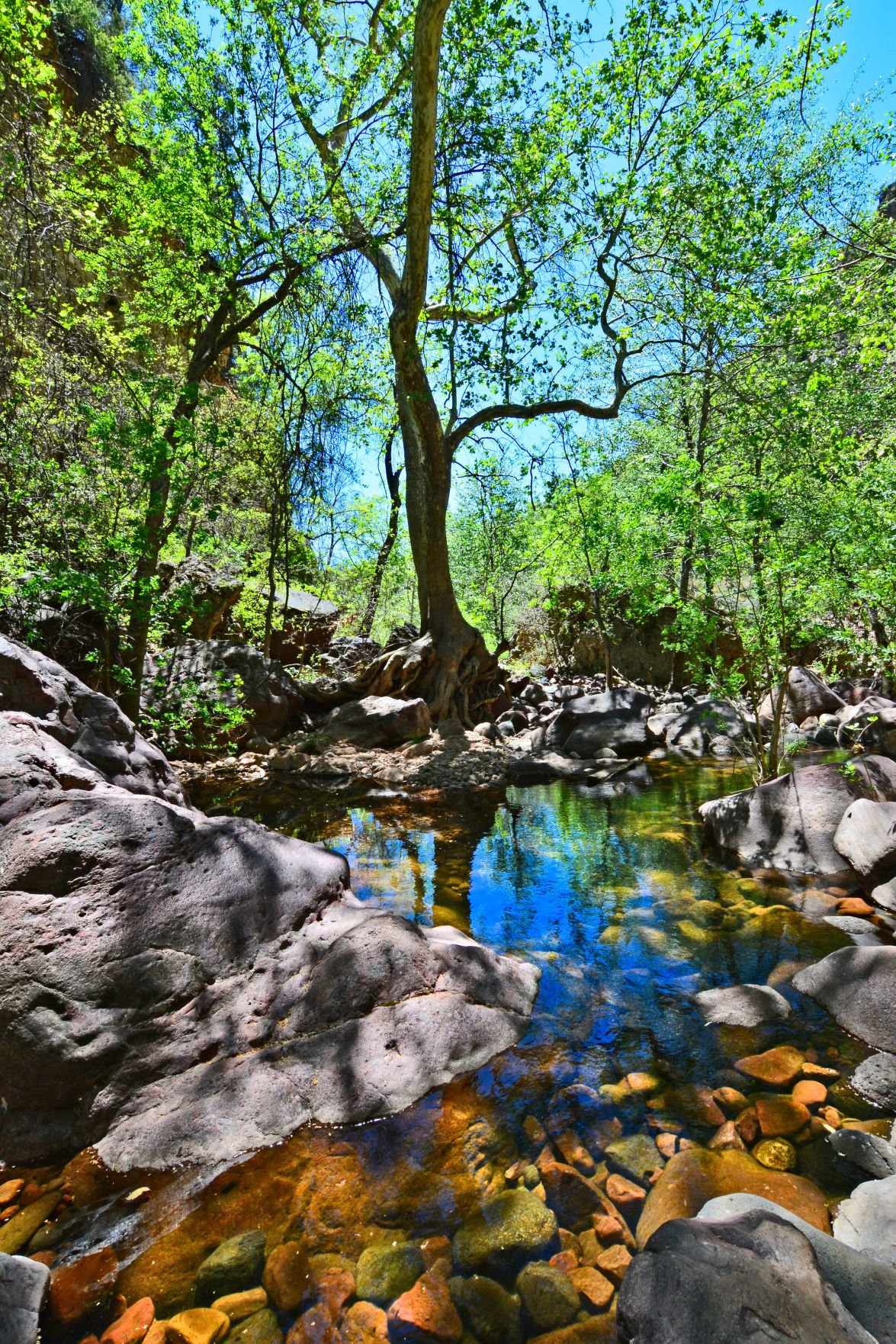 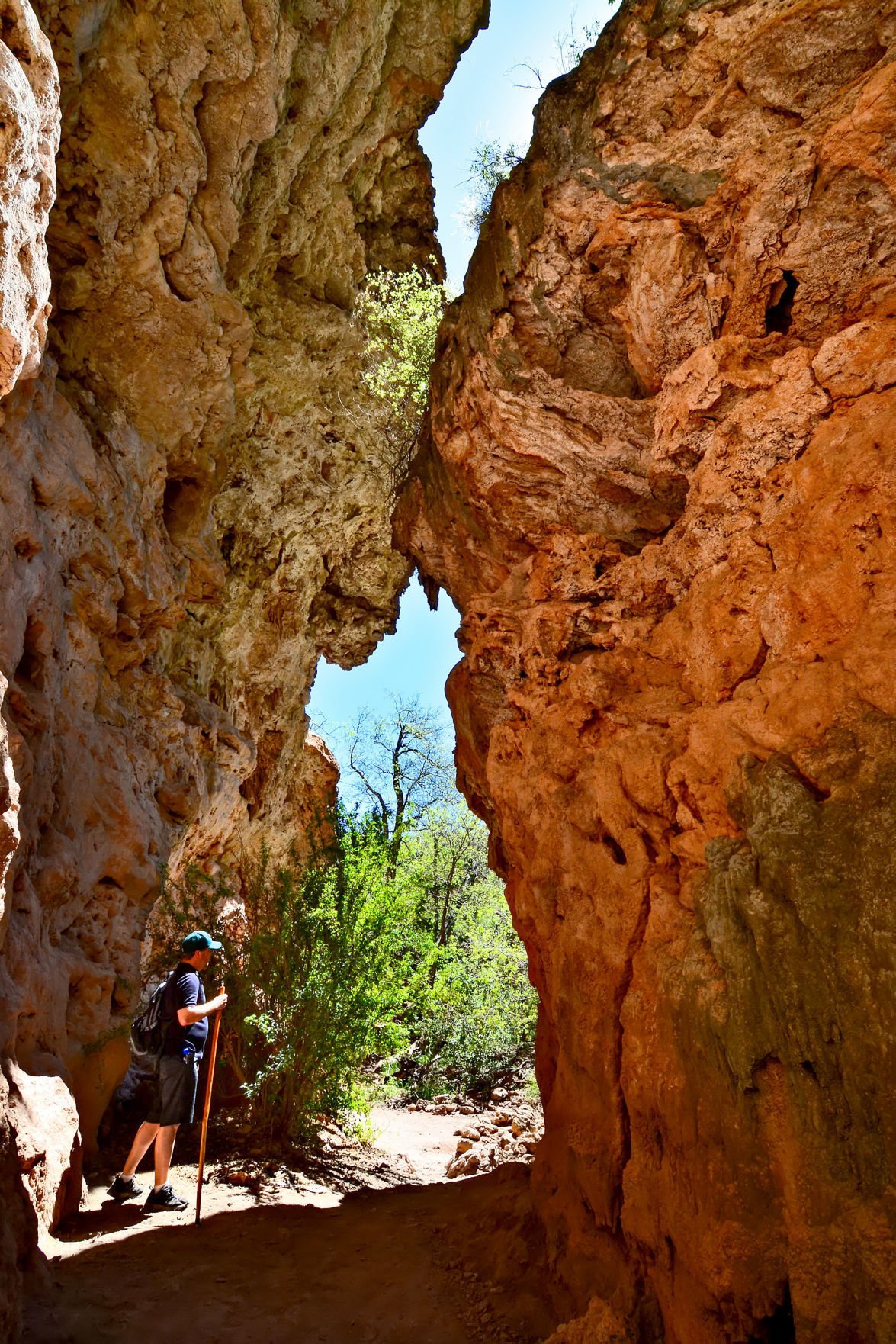 The Pine Creek Trail at Tonto Natural Bridge State Park is challenging with plenty of boulders to scramble over, but the rewards are pools to cool off your feet, and views of the towering travertine bridge. 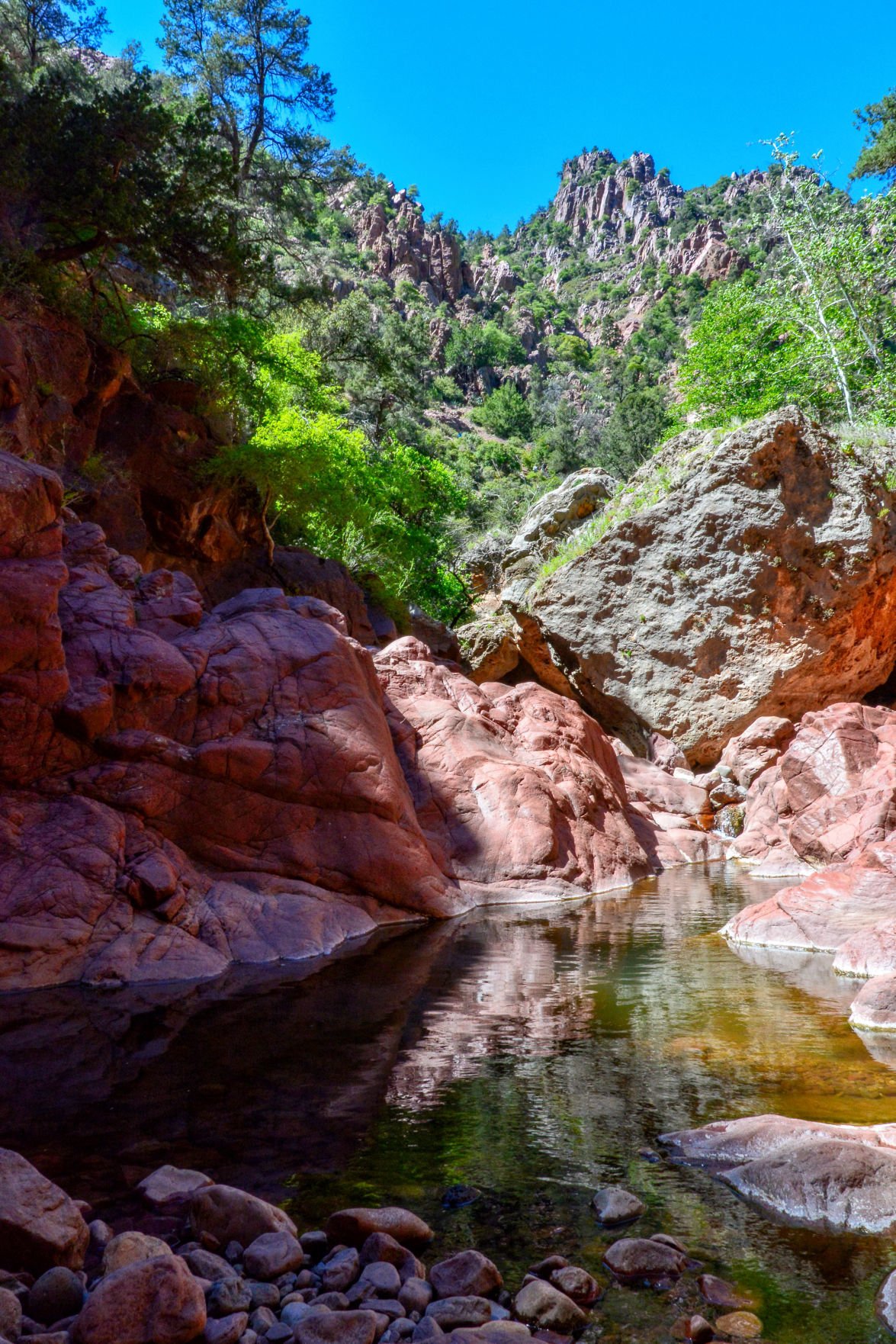 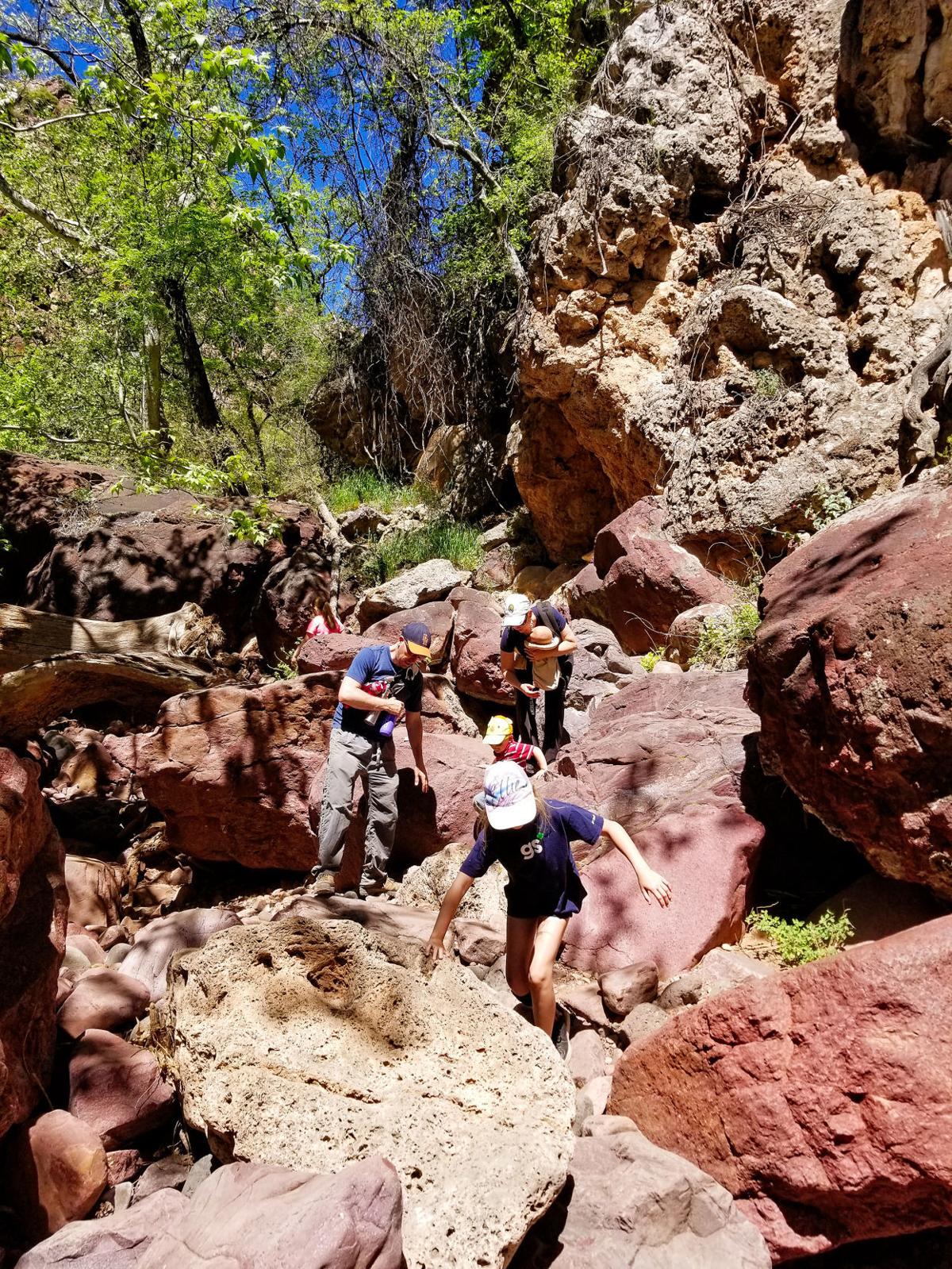 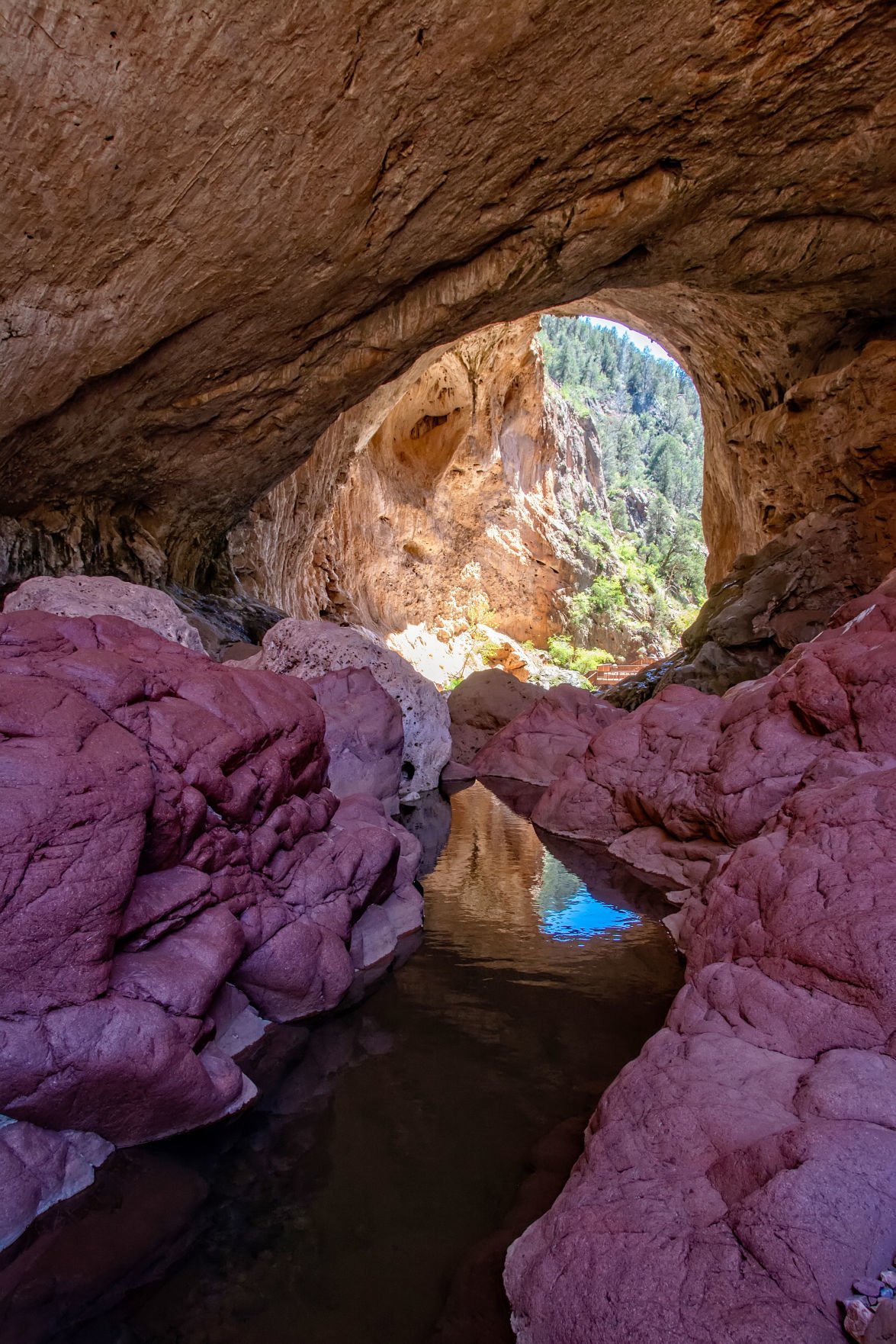 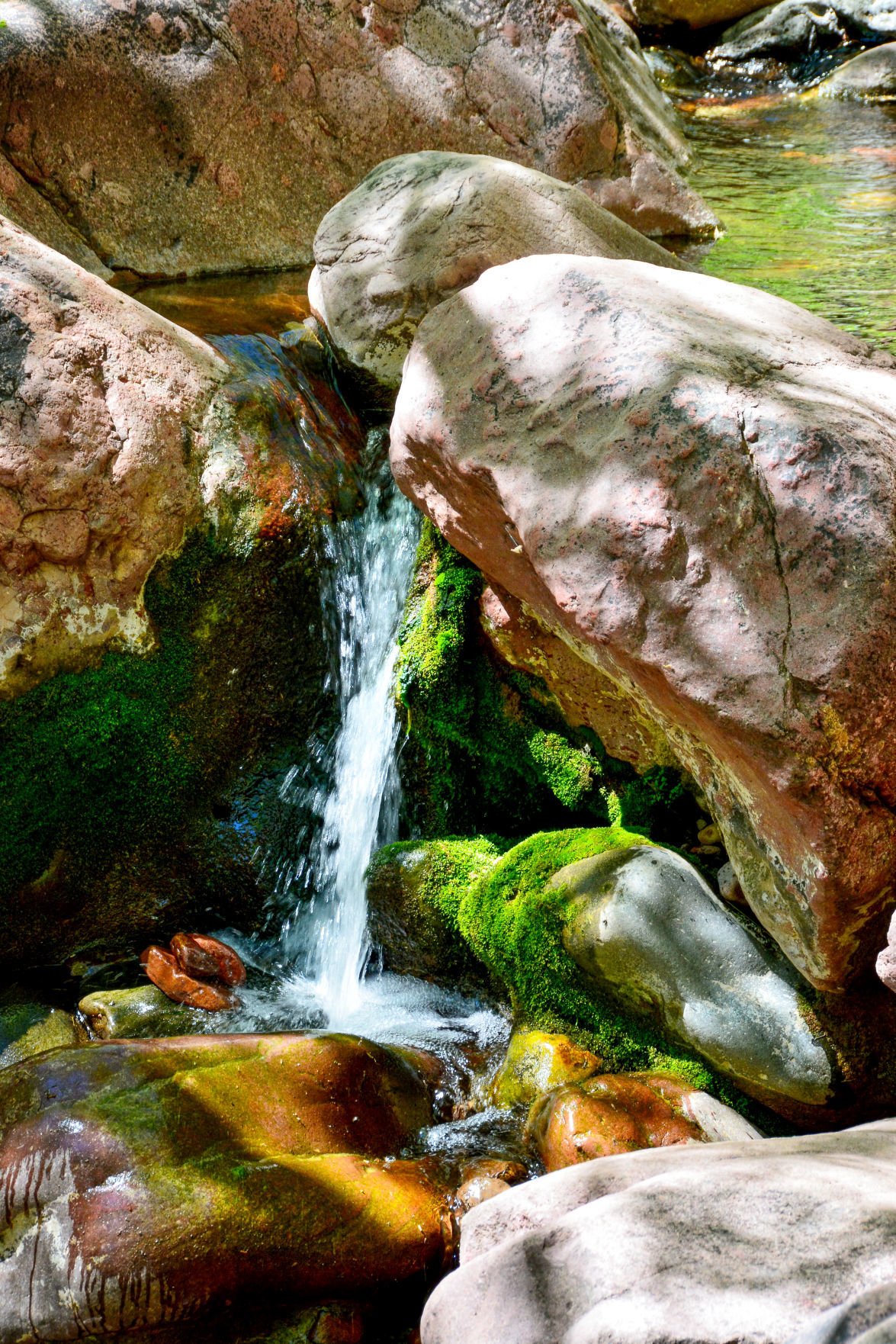 The Pine Creek Trail at Tonto Natural Bridge State Park is challenging with plenty of boulders to scramble over, but the rewards are pools to cool off your feet, and views of the towering travertine bridge.

He broke his ankle and leg two years ago hiking alone on the trail, and wanted to prove he could conquer it and his memory of the pain it caused.

We recently attended a fundraising event at the bridge, and decided it was a good time to hike the trail.

Now, I have hiked down to the bridge many times before, but always on the Gowan Trail. That trail is 2,200 feet down and back, and leads to an observation deck at the creek bottom where you can look up at the 183-foot-tall travertine bridge.

The Pine Creek Trail is about half a mile long and includes walking along the creek bed toward the natural bridge. You then view the bridge from the north.

Access to the trail leads off the main parking area. An unassuming path meanders over a wooden bridge to steps down to the creek bed.

Signs advised it is difficult, steep and strenuous and takes one hour to complete, longer if one stops to take photographs which, of course, I did.

I had always heard the Pine Creek Trail was rocky, but was unprepared for clambering over so many huge boulders.

It isn’t really a trail so much as an obstacle course.

A spider suspended over a small pool greeted us as we set off. I stopped to admire it and let returning hikers pass by on the trail. Then the fun began.

It soon became apparent that my camera had to be packed away. I didn’t want to smash it on the rocks during one of my inelegant climbs and needed both hands to be safe.

Just as I was thinking the trail wasn’t going to be worth the effort, it opened out to a beautiful pool of water. We stopped and absorbed the beauty — reflections dancing on the surface, bright green spring leaves newly emerged. We discovered this was the first of many spectacular views.

There were small waterfalls pouring into rock pools and plants that appeared to be growing out of the rock formations, suspended high in the air.

Arrows painted on rocks pointed the way to the natural bridge, but they were not always easy to find or follow.

We pressed on, not least because Keith had something to prove to himself and I was also determined to reach the back entrance to the bridge.

The trail became more and more beautiful. A group of cairns stood sentinel on a large, flat rock to the left of the trail. Butterflies floated by and unseen birds sang from tree branches. It was getting hot. The sun at noon offers the best light into the canyon at this time of year, illuminating otherwise dense shadows. Close to approaching the natural bridge, there is a corridor of travertine that offers cool shade.

We found several groups of people enjoying the views underneath the bridge and some paddling in the cool water. From here, you can look through the 400-foot-long, 150-foot-wide tunnel to the viewing deck and walkway of the Gowan Trail (the deck and walkway are currently closed).

The return hike seemed easier because we knew what to expect. When we arrived back at the parking lot I felt a sense of accomplishment — an afternoon well spent.

I was reluctant to leave the waterfalls and pools of sparkling water. Next time I’ll take a picnic and spend some time meditating at the water’s edge.

Four trails to choose from

If you’re not into scaling boulders, Waterfall Trail is close by and only 300 feet long.

Gowan Trail, the longest in the park, is 2,200 feet long down and back. Partially open, it leads to a footbridge and observation deck, that are currently closed.

The Anna Mae Trail is about 500 feet long and leads to Pine Creek Trail and the Natural Bridge.

Wear hiking boots, sun protection and bring lots of water. There is no cell service in the park.

“A person underneath the bridge can stand with their feet on the rhyolite and their hands on the travertine, thus spanning a period of millions of years with just the lengh of their body."