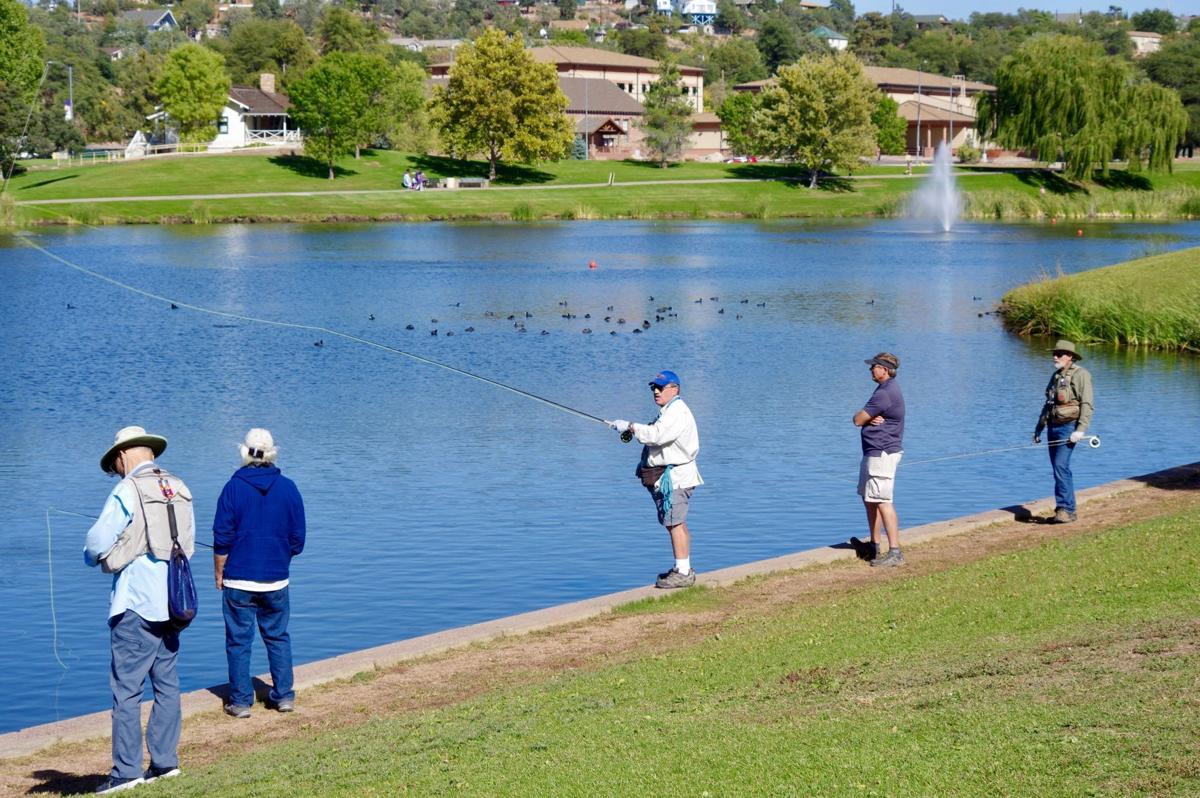 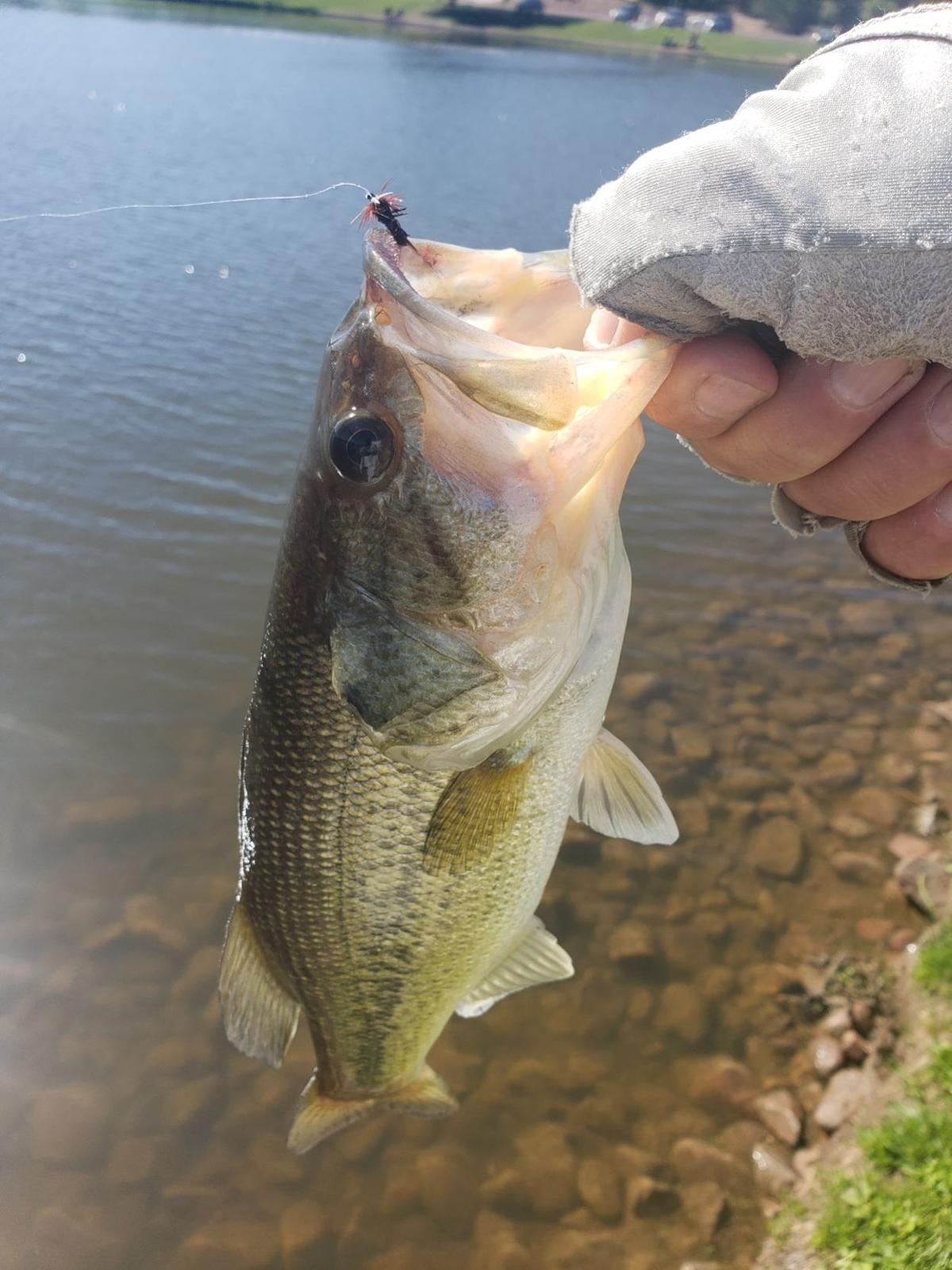 A largemouth bass caught on a fly at Green Valley Park.

A largemouth bass caught on a fly at Green Valley Park.

With Tonto National Forest closed, and access to streams below the Mogollon Rim off limits, I have been spending a lot of time at the Green Valley lakes (GVL).

Friends have also been fishing Woods Canyon and Willow Springs lakes as Apache-Sitgreaves National Forest is still open for use, just not allowing campfires.

What I enjoy about fly fishing on a lake is that I am always moving and actively casting to likely spots along the bank or just past the drop-off within easy casting distance from shore. It is not uncommon for me to catch 30 or more bluegills in one trip around Lake 3, which takes me about an hour and a half.

I do not make long casts, and often will primarily use a roll cast, which both of my older grandkids mastered when they first learned to fly fish. That cast is great on a lake like GVL where you have people walking behind you around the lake. The roll cast never travels behind your back, so is safe. It is the most valuable cast on Rim Country small streams too because it keeps you from catching trees and bushes behind you on these brushy creeks.

New fly fishers love making artful overhead casts, but sometimes get frustrated by the less than artful slap of the water that comes when multiple false casts are made to get the fly to the intended target.

When I make an overhead cast, I try very hard not to make a false cast. I learned long ago that only bad things happen when my fly is in the air. There are too many trees and bushes that want to grab my fly. If I can make a single cast without false casting, then my fly is in the water in front of fish that much sooner.

Not that my casts are perfect. I have made my fair share of bad casts. Unless my fly is likely to snag on a branch, rock, or weed during the drift, I leave my bad cast in the water where it landed. I can’t even count the number of fish I have caught on bad casts. When it happens, I evaluate what I did wrong with my cast while I watch the fly or indicator. Then when it has cleared the potential area where a fish could grab it, and not scare any fish from where I was originally targeting, I carefully recast to the more desirable spot.

A long cast is unnecessary with fly fishing. I have caught many fish with less than three feet of fly line plus my leader out. My typical cast is often less than 20 feet. The longer “A River Runs Through It” type of casts are beautiful to watch, and while I can cast that length, setting the hook with that much line out is very difficult. On a Rim Country stream, with all the swirling currents, a cast of 20 to 30 feet is the most you will ever have to manage.

People are often interested in what I am doing, and how I catch fish with such tiny offerings. Fly fishing is a great activity for folks wanting to get outdoors and avoid crowds on the dock or along the shore, because you can catch fish anywhere with a fly rod.

When we are all able to return to large gatherings, I encourage you to join us at a Payson Flycasters Club/Gila Trout Chapter of Trout Unlimited meeting. Members can advise you on equipment and will be happy to help you get started with fly fishing.

A common piece of advice from club members: do not buy a bamboo fly rod to start fly fishing. These rods are beautiful, and I have several from my uncle I treasure, but they are often much harder to cast as they are heavier than the modern fly rods, and are tiring to the new angler.

Fly fishing is a reasonably priced entry activity. You can get a cheap fly rod for about $50. But I would suggest an upgrade to the introductory package from any of the catalog sporting goods companies. These run from about $120-$150. The packages come with backing, fly line, and a leader already loaded on the reel. These four-piece rod and reel combinations also come with a sturdy travel case.

Buying a four-piece rod is really a smart option if you ever plan to travel with your fly rod as the case fits nicely into a suitcase or duffel bag. I have several rods, but my primary outfit that I use about 95% of the time is a 5 weight rod and reel combination. Five weight refers to the weight of the fly line used. It also describes an outfit that is in the middle range of fly rods between ultra-light and heavy-duty. My 9-foot rod works well for trout, bass, bluegills, and crappies. The 9-foot length is important to provide reach in small streams and gives it enough backbone to turn over a roll cast even in windy conditions. It also lays out great overhead casts for distance, when the need arises. An 8-foot or 8’6” rod just doesn’t do as good a job as a 9-foot rod.

Fly fishing from shore on lakes is a great way to start fly fishing. Bluegills are a very willing quarry and help get your skills honed while building your confidence for more challenging locations. Even a bluegill feels like a trophy fish on a fly rod.