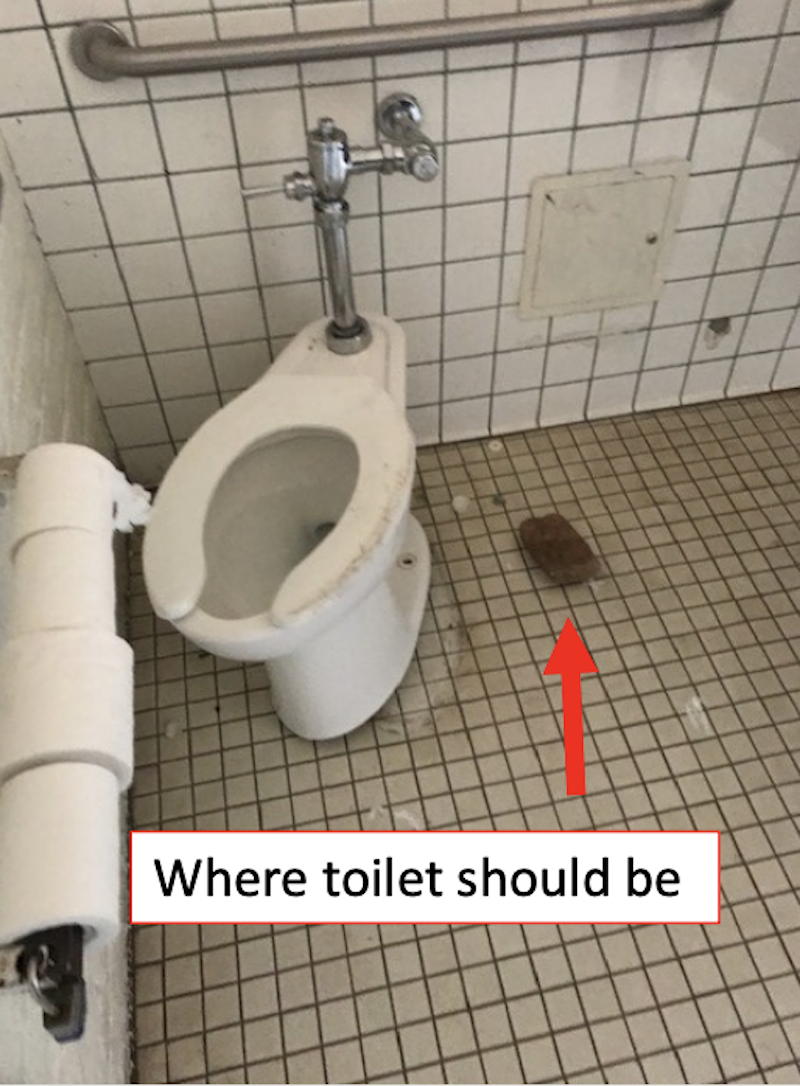 An example of some of the vandalism at Rumsey Park — a toilet moved from its drain.

Graffiti on benches at Rumsey Park. 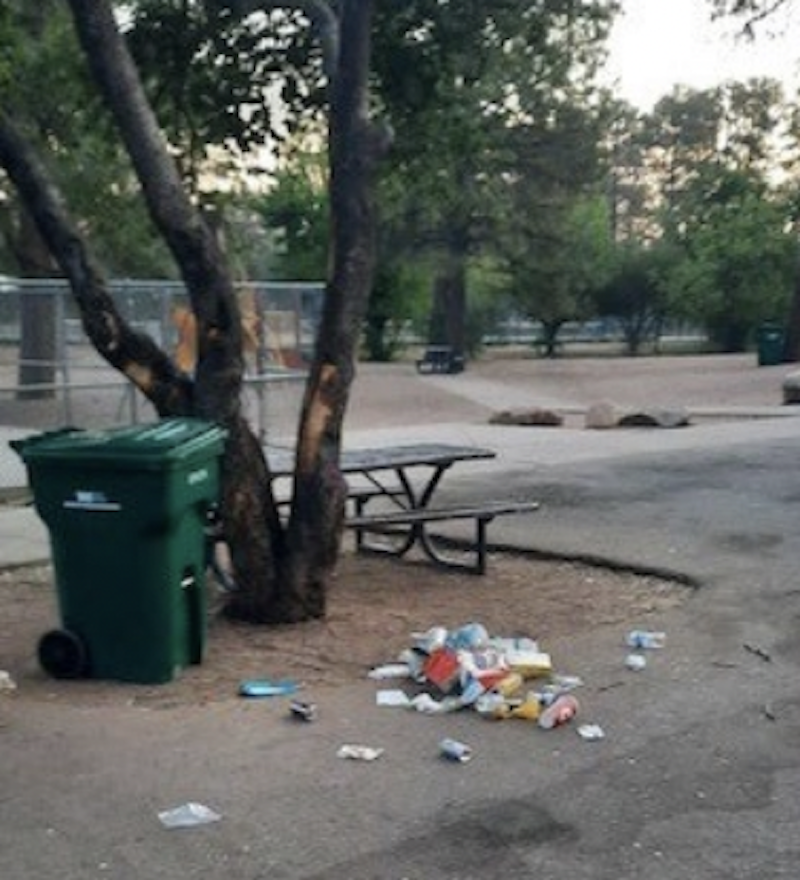 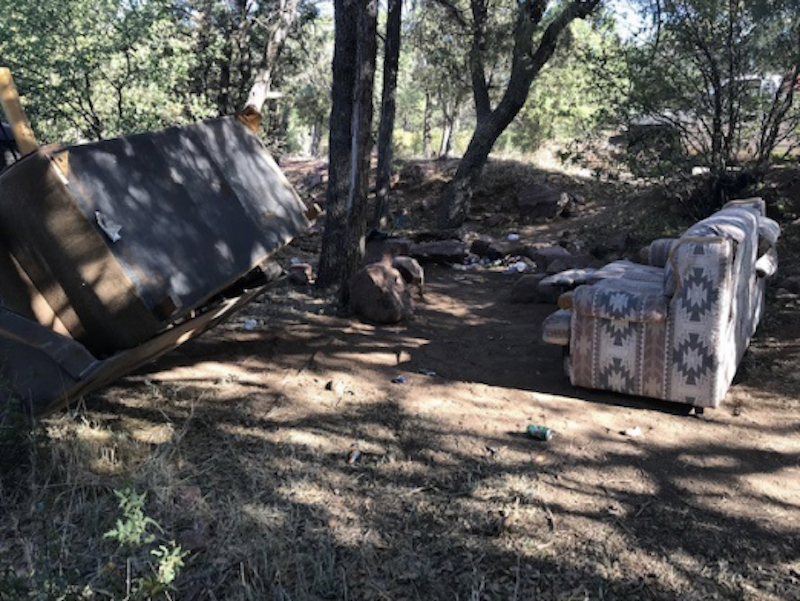 A camp with discarded furniture in the woods near Rumsey Park. 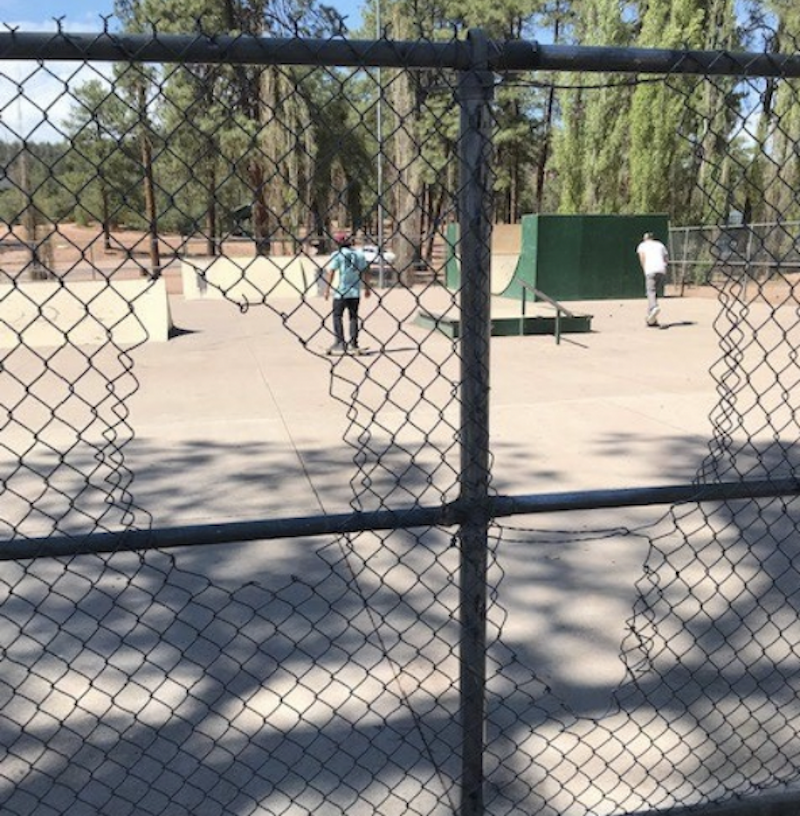 Damage to fences is another part of the vandalism taking place at Rumsey Park. They have been cut so often, staff gave up on fixing them. 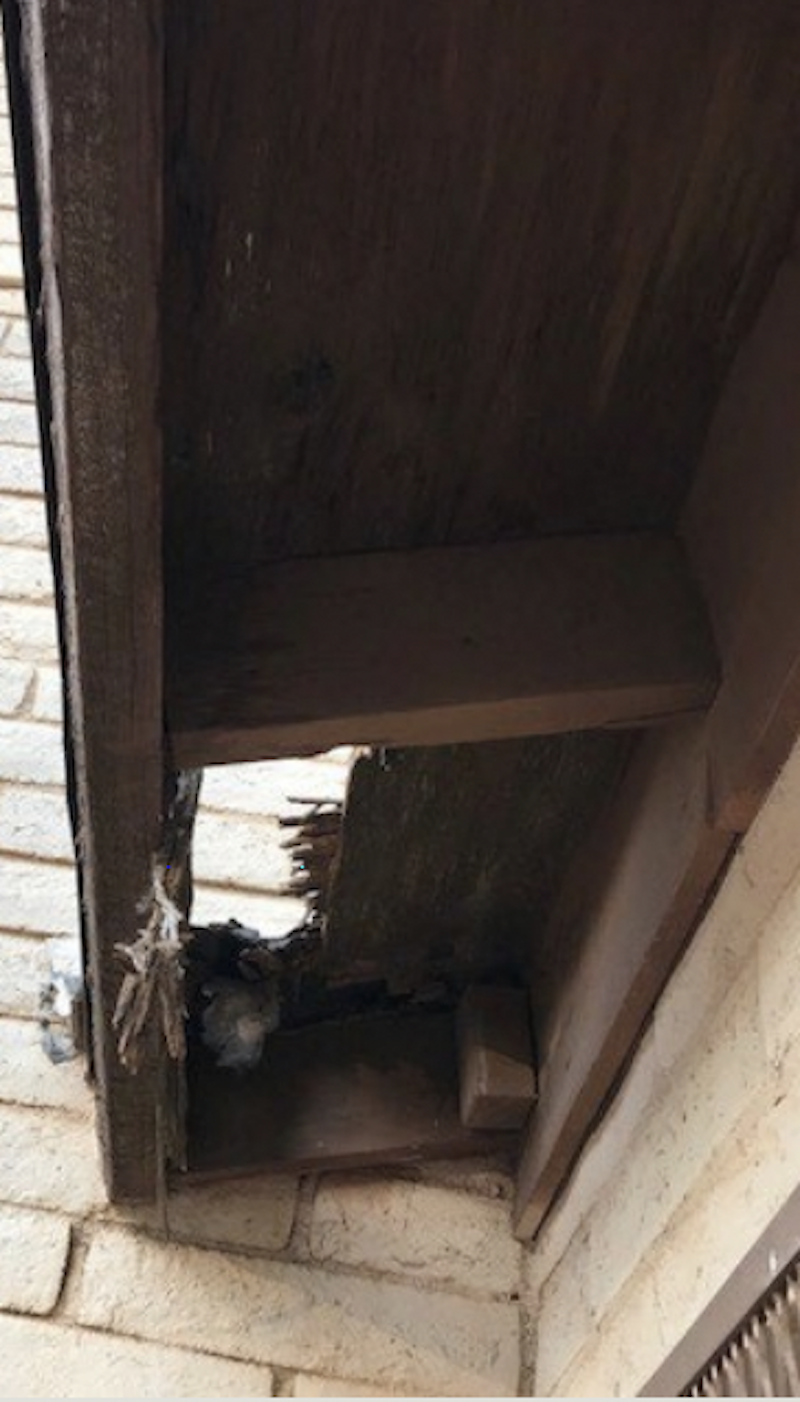 Damage to the wall of a Rumsey Park bathroom.

The public restrooms in Rumsey Park have been closed for months, with the police department unable to prevent extensive and repeated vandalism.

A July 8 discussion at a Payson Town Council meeting made Rumsey Park sound like a war zone, as police try to outwit what sounds like a youth gang — smart enough to post lookouts while others yank hand driers off walls and toilets from floors.

In the last nine months, the Payson Police Department responded to 157 calls about incidents in Rumsey Park. Calls ranged from requesting security to reporting criminal damage to needing an officer to quell disturbances or control traffic.

“It is becoming a real issue for us,” said Police Chief Ron Tischer.

The damage became so extensive and persistent that the town shut down the bathrooms and brought in portable toilets, which have also been vandalized. The issue has gone on so long that some event organizers have said they won’t host events in Payson any longer.

Courtney Spawn, director of parks and recreation, presented to the council the inventory of the damage done, as well as the response the town has made and plans for moving forward.

For months, the town has kept Rumsey Park restrooms closed.

Resident Jeff Robbins came to the council on June 10 to report the extended bathroom closures had consequences.

Robbins told the council that while at an event at Rumsey, he had a conversation with an event organizer from the Valley who was “angry and appalled.”

“The only restroom available to the group was a portable toilet filled to the brim with crap,” said Robins. “He and his group will not be back, and I was embarrassed.”

Spawn explained that the parks have always had vandalism. The challenge boils down to the repairs cost-benefit ratio when it comes to making the repairs and leaving facilities accessible.

“Once open, it’s how long do they last?” she said.

Staff documented the damage at Rumsey Park by snapping photos of toilets and hand dryers ripped from the walls and floors, graffiti, trash overflowing bins, and camps in the trees with mattresses and couches.

But Spawn told the council the town’s “desire is to get our restrooms back online.”

Scott VanOmmerman, Payson’s parks director said, “That was my call to close the bathroom.”

VanOmmerman has worked with parks for 20 years and says vandalism like this is the bane of the business.

“It’s not uncommon. It is not a sign of the times. (Parks) have all had issues in one form or another,” he said.

Rumsey has some special challenges, however.

“It is a very hard park to surveil,” said VanOmmerman.

The multiple entrances in and out of the park and the long twisty roads in the woods make for perfect locations to hide or escape.

In fact, VanOmmerman told the council Green Valley Park with its wide-open vistas does not have the same level of vandalism as Rumsey.

Tischer agreed that Rumsey has proven a challenge to monitor.

“We put officers into the park every night,” he said. “These kids see them coming.”

Mayor Tom Morrissey asked why surveillance cameras had not been installed.

“Cameras are a very difficult thing to introduce when you are surveilling the building,” said VanOmmerman.

Unless the town put cameras both inside and outside the restrooms, staff would not be able to guess which guest actually did the damage.

“Speaking from experience ... that’s not very effective in this type of situation,” he said.

Councilor Barbara Underwood asked if the town has a silent witness phone number or could it post a reward for information.

“Unfortunately, a lot of the people enjoying the park know the kids, but fear retribution,” said Tischer.

“Somebody has been doing doughnuts (driving in tight circles) by the pickleball court. That is very dangerous,” she said.

Then she gave an eyewitness account of an impaired driver crashing in the park as she played pickleball. The inebriated person then “pulled themselves up to the courts” before police arrived.

Morrissey had his own story. While attending a planned event at one of the ramadas, a couple of people drove by with their window down “cussed a blue streak and spun up before they went away.”

Police arrived in time to stop the driver.

“They get a ticket or get arrested,” said Tischer.

Spawn presented other ideas to the council to make Rumsey Park more presentable as the park serves as the primary location for softball tournaments and town sports.

Before an event, staff will walk the area to address graffiti and other unsightly issues. The town has increased the number of portable toilets and scheduled more frequent cleaning of the units as well. Police have added the park to their patrols.

“I’m sorry you’re having to deal with this,” said Vice Mayor Chris Higgins. “Yeah, it is very, very unfortunate there’s a few individuals that cause this much damage and destruction.”

Seems the council is lacking here. Why not security not by police department but private security. In this day and time cameras are utilized everywhere and the cost is worth it.