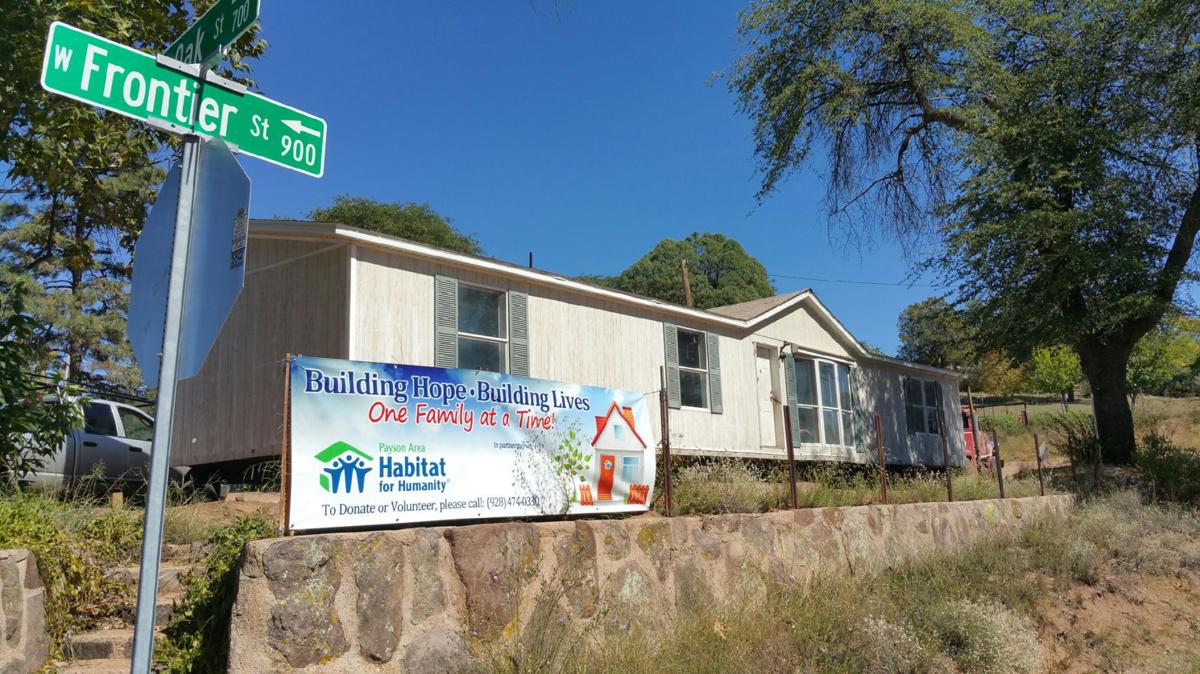 A family in Cornville donated this manufactured home to the Payson Area Habitat for Humanity. In rural areas like Payson and the Verde Valley, Habitat is the only organization focusing on building affordable housing.

In Payson, only a quarter of the overall housing units are available for rent. Most homes are owner occupied, which leaves little stock for workers.

This income data shows the disparity between the low salaried workers and retirees that often have a higher per capita income than workers. Studies show rural workers make less and therefore spend more of a percentage of their income on housing.

This chart shows that once a person moves into a place in Payson, they stay there. That does not help new residents to the area.

That’s the face of the housing crisis confronting Payson and many other rural communities.

The housing crisis in rural areas looks different — but no less desperate — than the state’s urban areas, according to panelists at Arizona State University’s Morrison Institute’s Nov. 23 State of the State conference on housing. Increasingly, the state and nation struggle with soaring home prices and increasing homelessness due to a lack of affordable options — all compounded by the impact of the pandemic.

Tania Simms, executive director of the Verde Valley Habitat for Humanity, discussed the rural housing woes as well as solutions during a panel discussion.

More rural residents are retired and living on fixed incomes, she said. Many have a place to live, but can’t afford to keep up with essential maintenance and repairs.

Meanwhile, younger residents struggle to find a job that will cover the rent, thanks to a lack of inventory and competition from wealthy, urban, second-home owners.

“Unemployment is more like 9.2%,” she said. “I think the poverty rate in a rural community is a big deal.”

She’s not wrong. The economic Research Service reports that the median income for a rural residents lags 20% behind their urban counterparts.

Out of the 25 million rural housing units identified by the Housing Assistance Council, 5% are considered substandard, especially on reservations where homes lack plumbing.

Even then, rural residents suffer from a lack of affordable housing. According to a 2016 U.S. Census Bureau study, rural areas suffer a serious lack of rental units.

As a result of the lack of supply and low wages, rent accounts for a much larger share of residents’ income.

The situation’s gotten even worse since the 2008 recession, given the lag in the growth and construction recovery compared to urban areas. Increasingly, even workers like police officers, teachers, firefighters and others cannot find a home in rural areas like Payson and Pine.

That moves up the chain to business owners who tell Simms, “It is really difficult to bring new businesses to a community without workers.”

The shortage of affordable housing becomes a self-perpetuating problem. The lack of good jobs and people paying sales and property taxes makes it harder for government to provide improvements in infrastructure, such as robust and reliable broadband — which makes it harder to attract businesses.

Simms said in one lower income Verde Valley community, students required to work from home could not due to a lack of broadband.

In the Verde Valley area, “Habitat is the only builder of affordable housing,” she said, so the organization keeps “the housing stock we do have.”

Habitat has programs to add improvements to homes, such as railings and ramps.

“We have helped modify a home to bring in a hospital bed ... so they have some security and stability,” she said.

Habitat often partners with local, state and federal agencies to find funding, but the limits on who qualifies frustrates Simms.

“One of the challenges, those funds can’t be used for homeowners who do not own the land they have their homes on,” such as those who rent a spot for a mobile home or trailer, she said.

Many of these homes do not qualify for government funding. Nor can Habitat pay to bring other homes up to code, said Simms.

For now, the Verde Valley Habitat seeks to keep people in their homes as long as possible. They hope that, “When they are finished with them, they pass it on to someone else to try to keep that affordable home available.

“We do have so few homes available to the lower-income people,” she said.