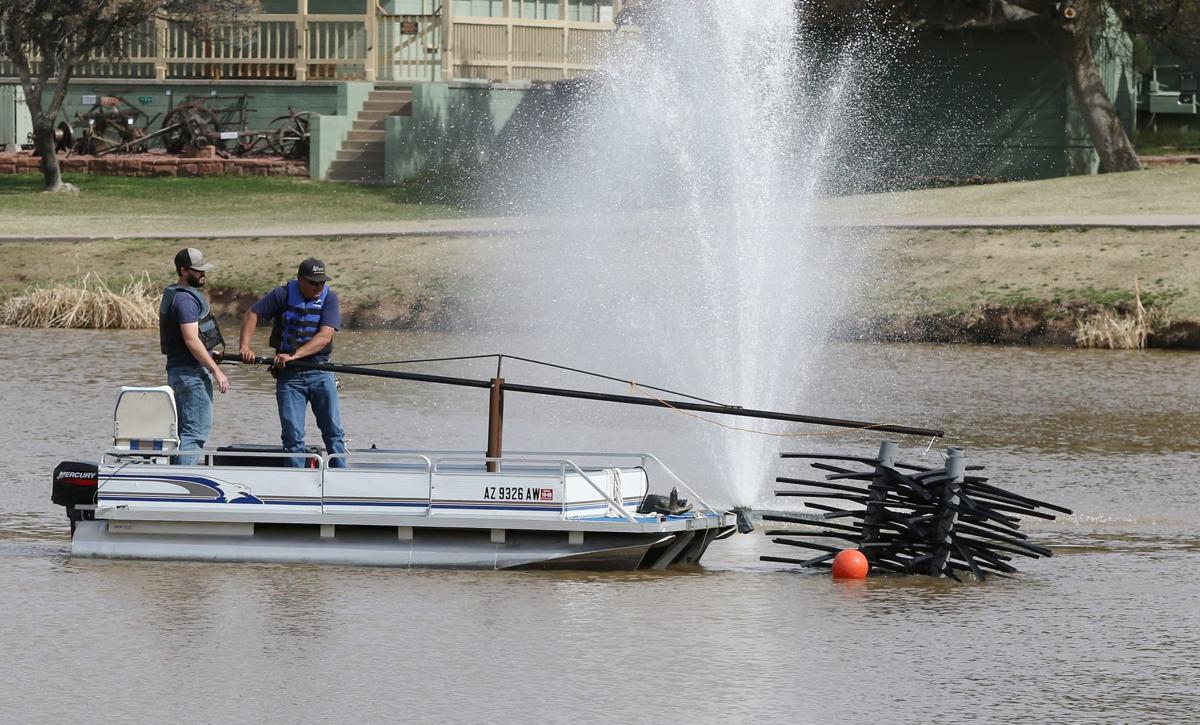 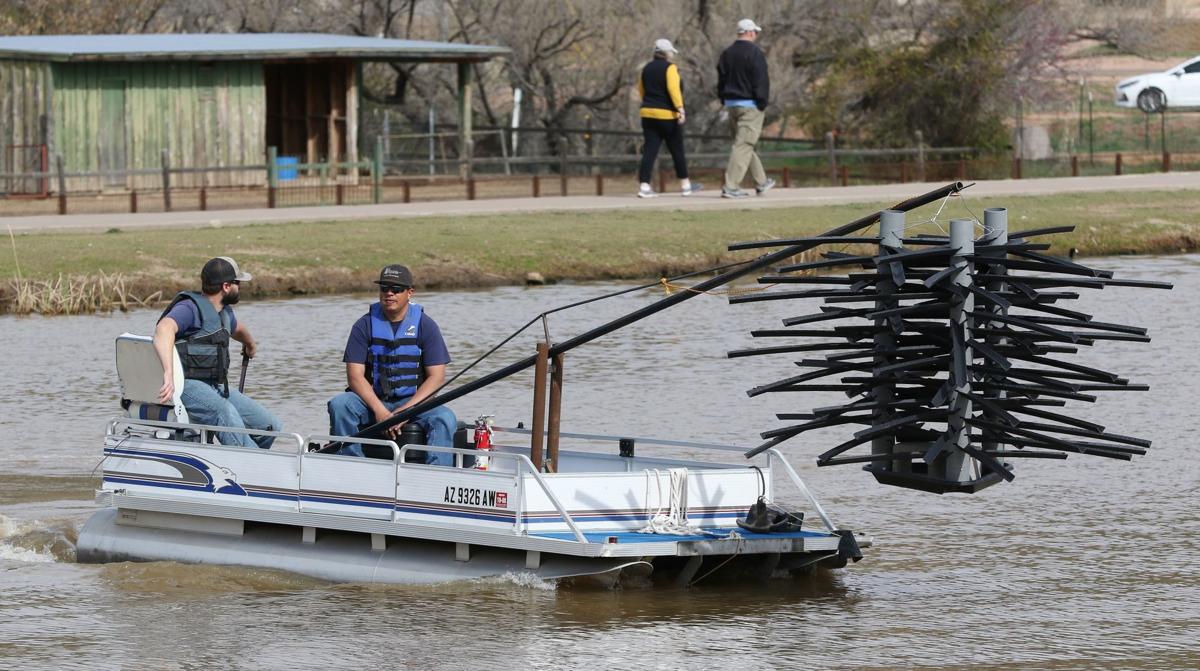 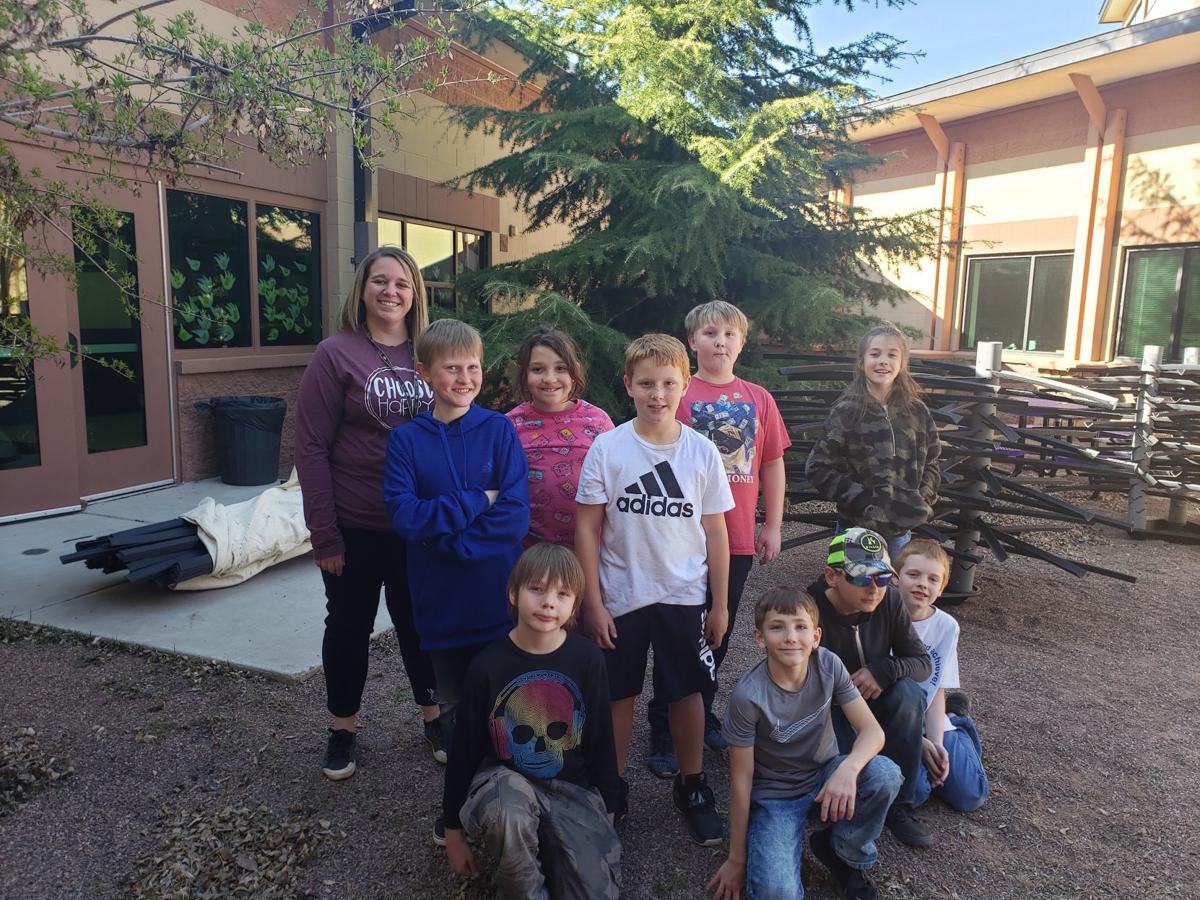 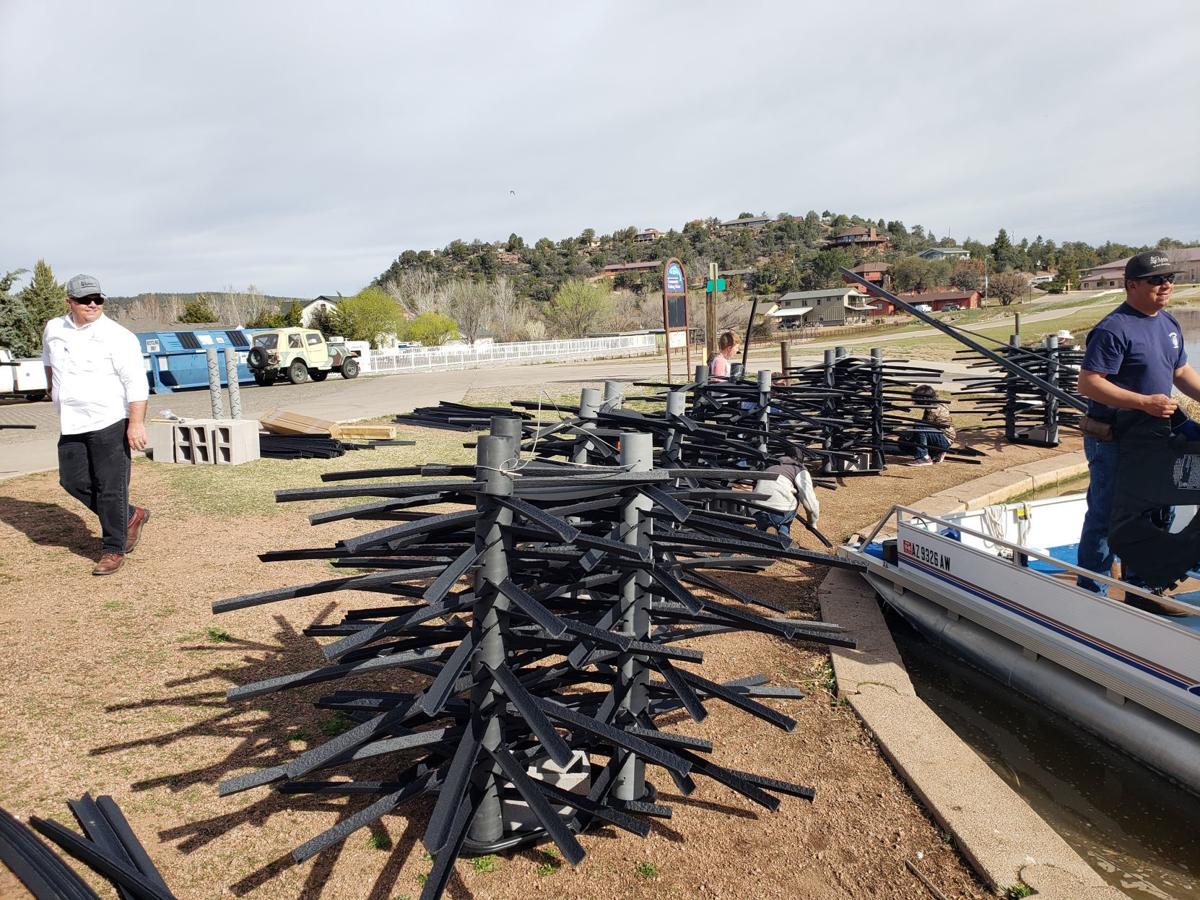 The 12 structures that the middle school kids put together were staged at the Lake 3 boat ramp Tuesday. 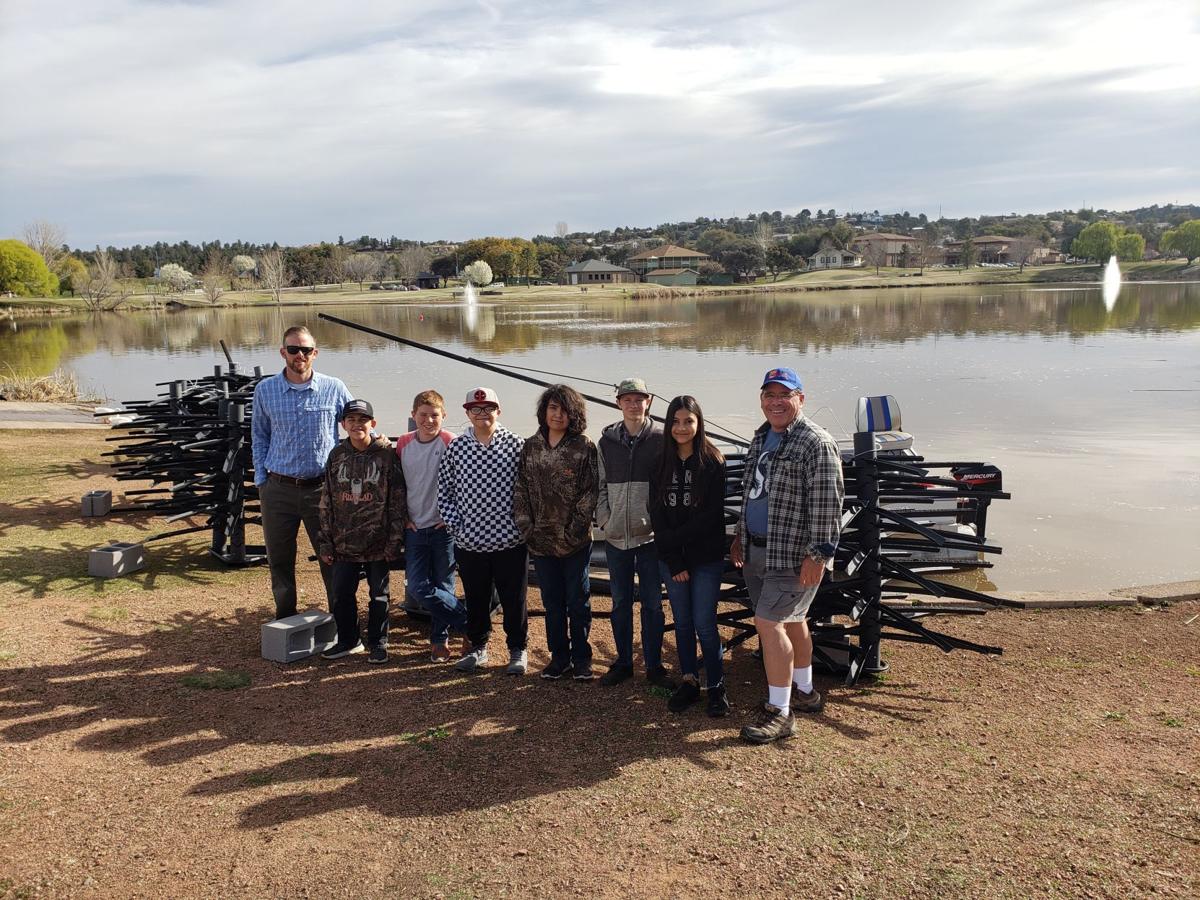 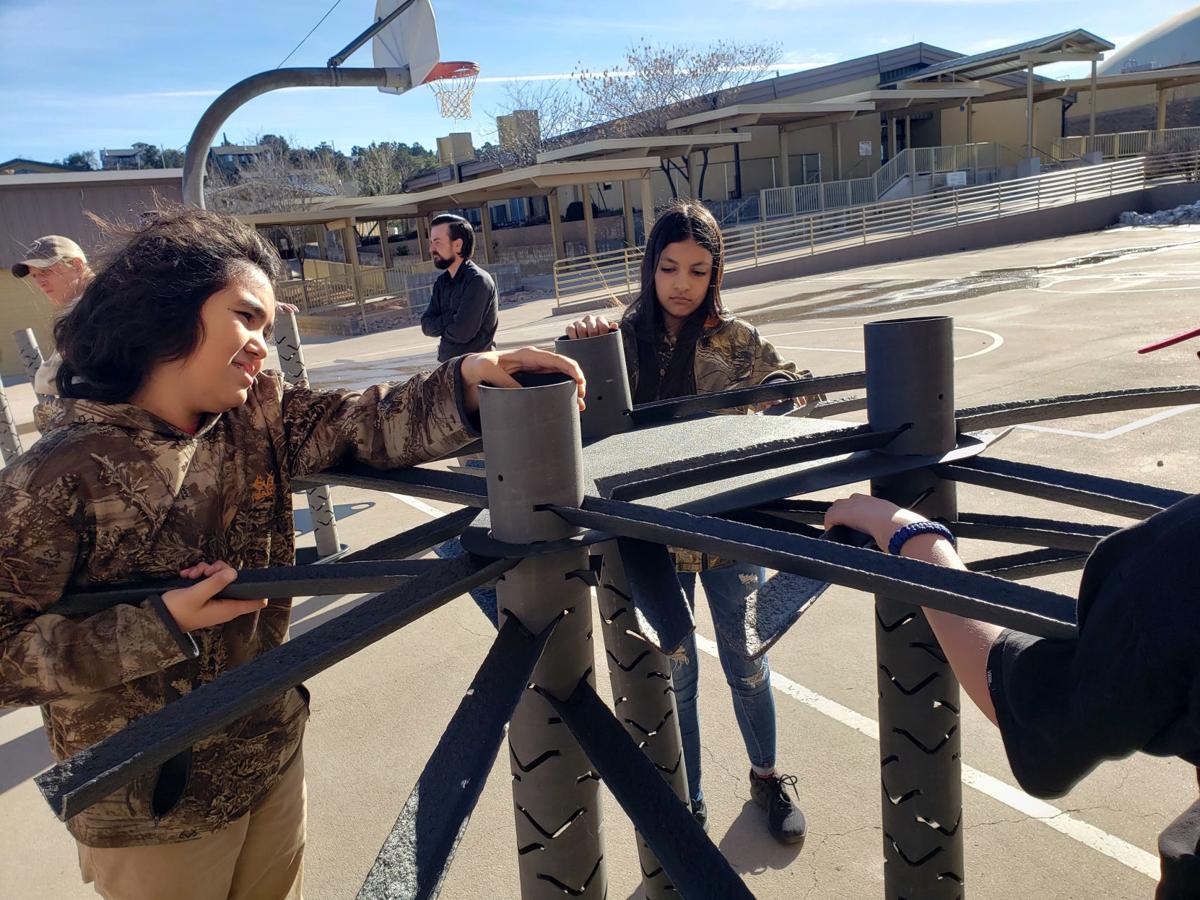 Tristan Alvarez and Trinity Davis working on a structure at RCMS.

The 12 structures that the middle school kids put together were staged at the Lake 3 boat ramp Tuesday.

Tristan Alvarez and Trinity Davis working on a structure at RCMS.

Recently I wrote about a plan to enhance fishing at Green Valley Park with the addition of tree-like fish structures in the lakes.

These fish structures are also being used to successfully attract bass, crappies, bluegills and catfish on Roosevelt Lake.

At Green Valley Park, town staff recently installed 15 of these structures in the largest lake, placing them in groups of three under orange buoys near the fountains and bubblers.

These structures will provide much needed cover for fish in the lake and ideally help fish remain closer to the bubblers if there are any low dissolved oxygen events in the lake during the summer.

Several groups have worked on this project, including the Town of Payson, Arizona Game and Fish Department, fishing organizations and fishing enthusiasts.

Fly-fishing students haven’t caught very large fish at the Green Valley Lakes, but the students have certainly caught a lot of fish, especially in the spring. It is common for most kids to catch 30 fish in a few hours in April and May. By then, the students have the fly-fishing knowledge and casting skill.

We time our fly-fishing excursions to capitalize on the spawning window for crappies in the shallows that are within easy casting distance. Besides crappies, the kids catch and release sunfish and the occasional trout or bass.

In the fall, students who have completed the introductory sessions can sign up for the advanced sessions that include fly-tying.

Fishing is a lot tougher in the fall, but the chance of catching trout increases. The kids enjoy tying fly patterns for a couple weeks and then going to the lake about every third session to have the fish judge their fly-tying creations. Even in the fall, most kids catch several fish on the flies they tied.

The fish structure project is largely a middle school project. Many of these students have been in the fly-fishing program for three years. They know that the ideal placement for the structures is well outside their casting range. They understand that the primary purpose of these structures is to benefit the fish.

They’ve learned that fish need cover, oxygen, food, and appropriate water temperature to thrive and that these structures, if placed near the bubblers, will provide that for the fish.

They also know that eventually those fish will head to the shoreline where they can catch them with their fly rods. They know that the fish move around the lakes in search of food, and during spawning season move into the shallows to lay their eggs and provide suitable habitat for the young fish after they are born.

The Payson Water Department delivered the fish structure supplies to RCMS for the students to construct.

Just before spring break, Curt Gill and Bryant Dickens from AZGFD came to the school to talk about the success of the fish structures in Roosevelt Lake and help put the first structures together.

The JRE fly-fishers put the final three structures together.

We are already making plans for next year.

According to AZGFD, there is plenty of room for additional structures, but we need funding to buy additional units.

We also have plans for Lake 2, but because the lake is much shallower than Lake 3, the structures will need to be shorter.

I appreciate the continued support that Payson Flycasters Club/Gila Trout Unlimited Chapter provides to the after-school fly-fishing programs. The Mogollon Sporting Association has also been generous in their support.

This project has benefited from the expertise provided by the water department and the AZGFD.

We hope that residents and visitors enjoy the enhanced fishing in Green Valley Lakes.