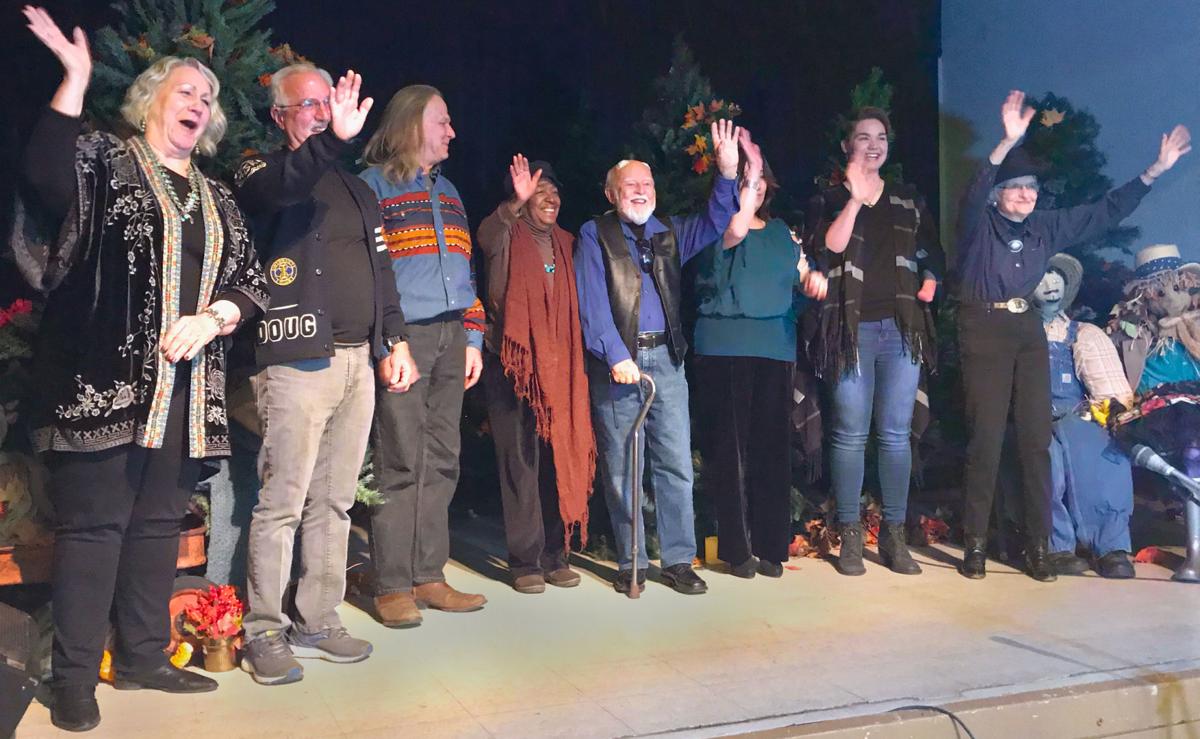 The whole line up of storytellers and the two accompanists lined up on the stage to wave goodbye to the audience. 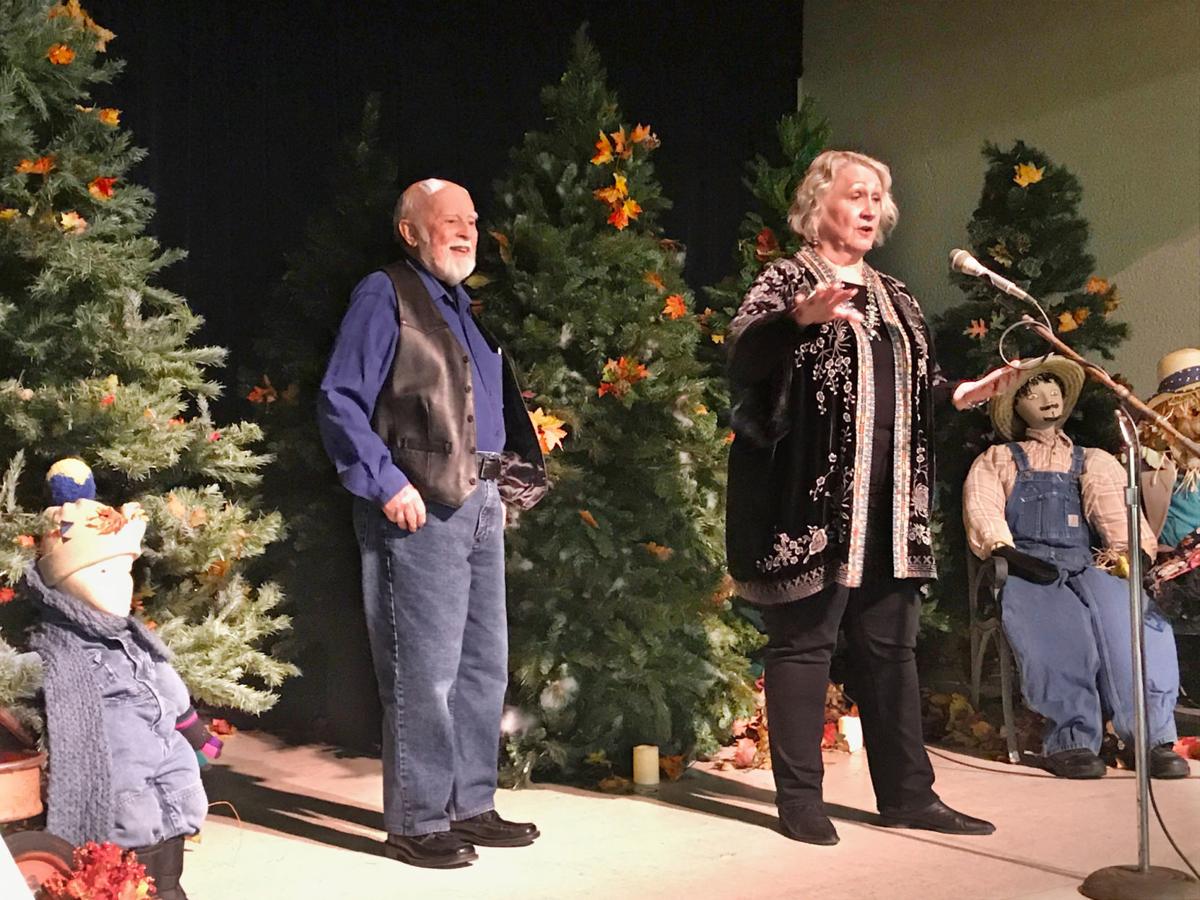 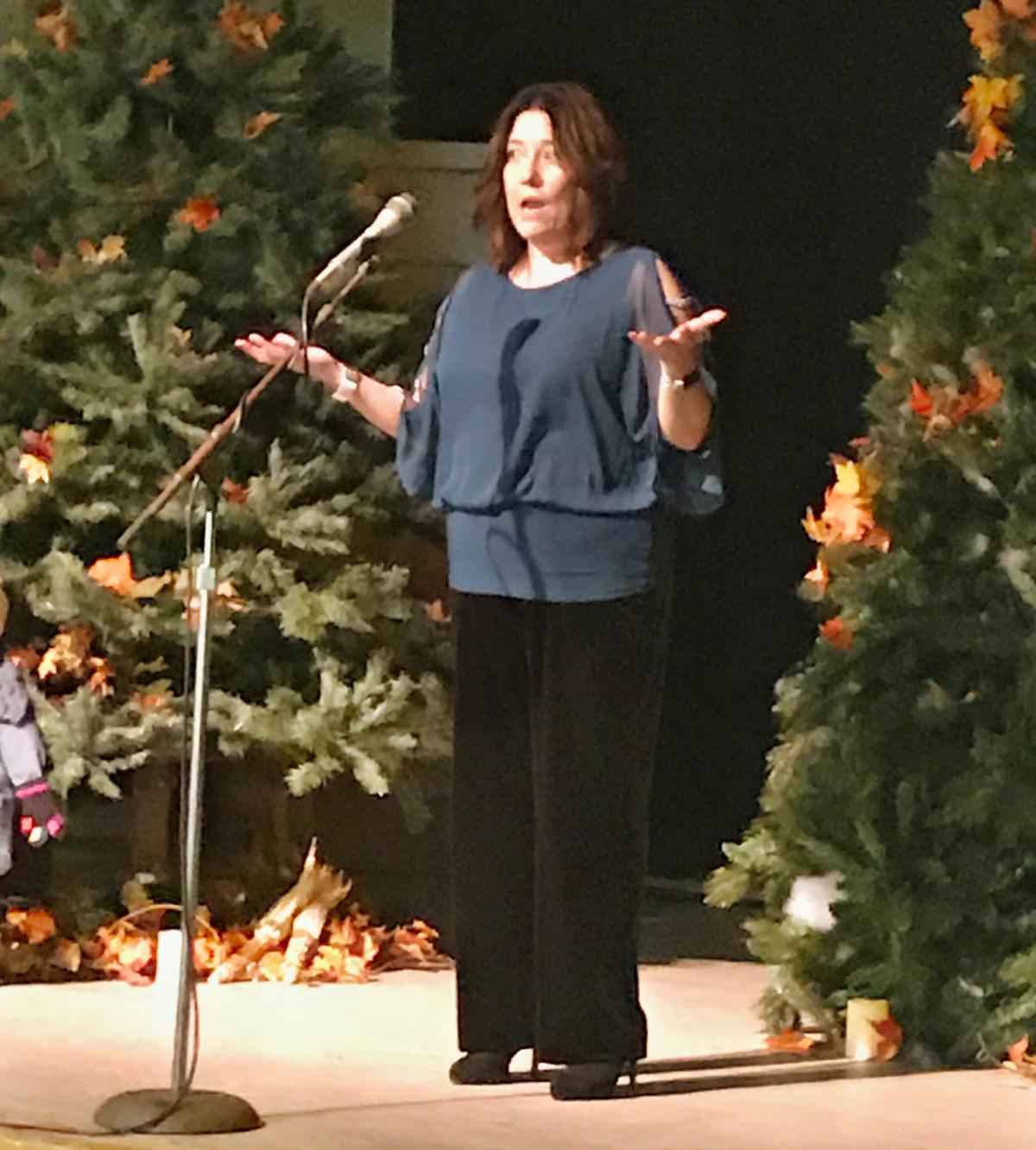 The whole line up of storytellers and the two accompanists lined up on the stage to wave goodbye to the audience.

’Tis the season for giving thanks and spending time with family.

And, of course, Pine’s Tellabration celebration.

For the 20th year, storytellers showed up to tell their tales at the Pine Community Center Nov. 23. At least one couple reported they had never missed a performance.

The storytellers captured the season in their warm and revealing tales.

The spirit showed up in the most remarkable places such as an owl hooting portents over the doorway — and a stubborn cat.

Or chasing a $75 frozen turkey down the sidewalk in Japan.

The story tells it all.

The international movement of Tellabration launched three decades ago.

The community embraced the event adding a scrumptious dinner before, decorating its stage with Christmas trees and providing homemade cookies for intermission.

Doyle encouraged his friends from the South Mountain Community College Storytellers Institute to come and share their talents.

Now, Liz Warren, one founder of the South Mountain program and an award-winning storyteller, has taken over the reins from Doyle who has stepped back because of health issues.

Last weekend, Warren took the stage as a storyteller, weaving together the sinister mythology of owls and the death of her beloved cat, Zuli.

“He was not the sharpest cat, but he was sweet,” she said.

Zuli was a loud, demanding creature — an enormous ball of white fur, full of complaints about having to live indoors, to avoid the lurking coyotes over the back fence.

The vet gave Zuli a death sentence after one memorable visit, saying he wouldn’t last the night.

A year later, Zuli was still kicking — and yowling.

Warren’s husband would look at the discontented cat and say, “Well, Zuli, every day’s a gift.”

One night, an owl perched above the front door, hooting mournfully.

“In other cultures seeing an owl is associated with death,” she said.

Warren took it as a portent signaling the death of a dear friend — the week before. “I thought the owl made a mistake,” she said.

They were all gathered to remember their friend, when Liz told them about the owl.

And that prompted her husband to tell the story of Zuli’s remarkable survival. “Just goes to show, every day’s a gift,” he said.

One guest spoke up. “Are you talking about that cat?” she asked. “He doesn’t look so good.”

Sure enough, they all turned to see Zuli, lying dead by the front door just beneath the owl’s perch.

The owl was right.

But so was her husband: Every day is a gift.

Other storytellers included Doug Bland, Rachelle Dart and Dee Strickland Johnson (aka Buckshot Dot) expressing the lesson of gratitude in their stories.

But it was Joyce Baker, who brought home the lesson of the Thanksgiving season. She owns a cyber security-consulting firm and has spent her career meshing her multi-cultural background and education into stories that promote understanding and connection.

Baker shared her story of the seemingly disastrous effort to stage a traditional American Thanksgiving dinner in Japan.

She worked miracles getting the fixings — including an eight-pound, $75 turkey through the mail.

The turkey broke through the bag on the way home and went sliding down the street. The mashed potatoes came out weird. And the borrowed oven for the turkey wouldn’t cook.

As they sat down to eat the cold mashed unpeeled potatoes and the pallid turkey, one of the Japanese guests asked politely — “Is this a traditional American Thanksgiving?”

Baker looked around the improvised table, crowded with friends from all over the world enjoying one another’s company and replied.